Visualize it as the playground of the rich and the aristocrats of Tenerife of olden days, There, a famous Genovese banker set more than one foot.

Discover why this grand Casa Roja is most suited for romantic vacations at any time of the year.

Even a week-end will do, such as for the famous Romeria de San Roque of Garachico when parking may only be found in the next town.

Indeed, this stately mansion which has a rather understated appearance on its outside was residence of the counts of Gomera. However, its welcome plaque promises distinction and secrets inside.

Most of the Red Quinta's shell has been shed inside and out. This romantic hotel of Garachico was totally revamped. High beams which have the color of Teak form handsome, lofty ceilings. A generous hotel patio repeats the building's former colonial elegance. Tall palms with other lush green plants form islands in there.

The plants almost give it a Victorian touch. Enjoy this tranquil oasis to relax with your notebook and free Wifi.
So did the Thirty-something couple of Wales whom I met there in December 2011. They told me that they loved this romantic hotel. 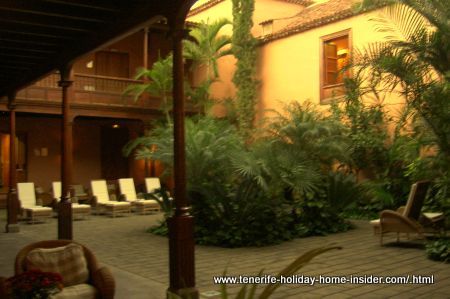 The strong wooden pillars of the surrounding timber balconies create more little privacy nooks. There, very comfortable easy chairs invite you to relax. Open doors and winding stairs break the monotony of the yard and welcome you to explore to see charming reception rooms and more. The photo depicts a wide open alluring window on the first floor. It captures your attention. It draws you up and plays with your curiosity. Spot more intriguing background illumination of this romantic hotel whose first name Quinta is Portuguese for farm.

The Quinta Roja's classic, modern interior is even superior to a boutique hotel, while the latter's modern set up often lacks contrast. Contrary to that, the design of the Quinta Roja has it and is therefore much more alluring. Its Colonial Canary house frame sets the base for a nostalgic mood. Its classic furniture are part of the trend setting foundation. Ornamental details enhance it. This romantic haven of great individuality excels in a different way compared to other Colonial Spanish architecture, as seen at Hotel El Mirador. Indeed, this charming small hotel of Tenerife's most tragic town of the past has many enchanting features of ornamental surprises with artistic touch. The decorations are often very simple but, make good focal points and harmonize perfectly. 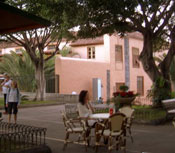 Take your breakfast on the peaceful, outside veranda which is flanked by plants. Watch the world start the day on the town square Libertád.

Gaze at the trees like a young girl in the picture. She discovered birds who tweat poetic rhymes.

A young lady sat by a table. Later, a young man came. The evening had quickly turned dark.

Idyllic like Paris at night with lovers and festive light

The man put his arm around the young woman who had waited quite long. Both walked off too fast for my camera to catch them sharp without tripod.

Listen to the ancient bells of the slender tower of Santa Ana when they strike a chord of days gone by. Discover them by Tenerife photos Garachico which reveal Quinta Roja's surroundings with many a night scene with moonshine for romantic bliss.

Staying at Finca Rojo Hotel for the spectacular Garachico Romeria festival is an ideal option.
The date for its next event between the end of July and middle of August has not been decided yet. The celebrations will start in the church of Santa Ana, while the street parade will follow. More details can be found later by www.garachico.es 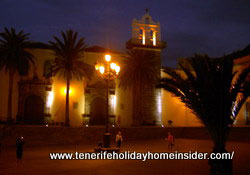 In fact, Hotel La Quinta Roja has the most gordeous, dream-like views in its immediate vicinity at night thanks to an amazing historical building and its lit up square where tourists gaze in awe at so much poetic beauty. It's the large church yard of Garachico Convent San Francisco which is bathed in the most embalming, warm light, above all when a full moon is up.

Retreat to the roof terrace to see mount Teide on the horizon. Go there at night to stargaze and spot a nostalgic La Gomera sundown above Garachico's beach. Quinta Roja Garachico is a perfect place to write poems, for honeymoons and to celebrate weddings and anniversaries. Agatha Christie the novelist who was so fond of Hotel Taoro and Tenerife North would have loved Quinta Roja and its village surroundings. However, it's unlikely that the former estate of the Gomeran gentry was looking as good as now in the early XX century. 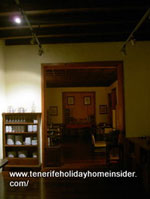 Have dinner in the handsome, romantic hotel dining room. It is tucked behind the interior yard. Visualize that chamber music was played there once for the dance of the house.

Take a morning or night dip in the hotel's jacuzzi on its upper floor. Or go there to swim or to gaze at the rooftops of a former town which had once owned the island's most important port and riches until drama and tragedy burned and washed most of it into the sea. Times come and go and may tell a story like a legend of history Tenerife which makes your mind spin. Now, Garachico hotels and many an old house tell some of its tale of romance, love and fate.

Services at the romantic hotel Quinta Roja of Garachico

Have a great story about a romantic hotel?

Perhaps, you've found the love of your life in a romantic Tenerife hotel or you encountered a spooky one. You may have celebrated a great honeymoon or anniversary. Whatever encounter with romance there was, come forward and make somebody's day! Some information about the quality of the hotel and its services is welcome. All Canary Islands are of interest here, by the way.

Publish your romantic memories of a Tenerife hotel with Tenerife articles quick and very easy.

The ghost of Quinta Roja

Unfortunately, I can't find its report any more to pass on to you by a link. I only traced one Tenerife haunted house story which is in Spanish and ironically about one of the islands most modern museums of science and the Cosmos.

That's the other red mansion of Garachico town. The XVII century place was turned into the San Roque designer hotel not long ago. It's typical for its artistic decor and bedrooms where bath and sleeping are all in one space, while rustic, classic and modern go a long way.

New attractions next to Garachico's most romantic hotel Quinta Roja

Since end of May 2012, the new Garachico port with its Marina has been ready to use for the sporty and the rich, while the new central town funicular will be there soonest, a stone throw from the hotel. Why will it come quickly? The planned Garachico funicular will be so much easier as well as cheaper to build than Garachico harbor.

From romantic hotel back to hotels Tenerife most of which are in ideal locations for tourists with children or even smaller kids.