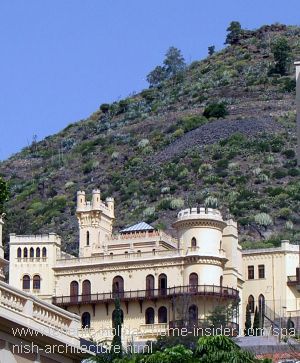 Obviously, Spanish architecture has to be of Five stars for a hotel with the highest credentials.  The Gran Hotel Bahia del Duque in Adeje of Tenerife South is such an example.

Indeed, many of its outside features match the depicted ancient former Hotel Quisisana.

The hotel's views as well as class would have been fit for the last Guanche leader Mencey (Diaz) Pelinor of Adeje, who had a status similar to that of a Duke (Duque).

Speaking of history, perhaps you have noticed  the building on the hill above the famous Rambla of Santa Cruz Tenerife capital.  This former Hotel Quisisana was one of Victorian hotels in Tenerife. Only its outside reminds the Spanish architecture of Hotel del Duque.

So what's so special about the Adeje Duque Hotel's architecture?

100 000 square meters certainly left tremendous scope for the Spanish architect Andrés Piñero to create impressive Spanish architecture of the hotel Bahia del Duque. Added nuances by artificially heated saltwater pools which sparkle in the Tenerife sun and tall green palms were not enough for a paradise hotel resort setting, though. Don Andrés did better than that.

By the way, the interior design was done by the Spaniard Pascua Ortega. 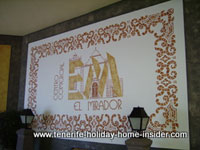 A colonial familiarity is very obvious in the Spanish Centro Comercial  by Hotel Mirador.

Its welcoming board is depicted beside and reads 'CC centro Comercial El Mirador'. 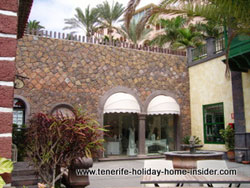 White washed masonry which is broken up by volcanic grey stones sets the Tenerife mood everywhere by the Hotel Mirador mall. Discover a good example by the picture of the Cafe Bar Acanto further below on this page. 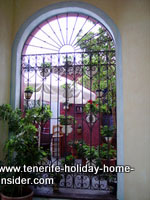 This iron door with its yard inside, called patio, is a 100 per cent authentic Spanish architecture detail of Andalucia.

This is just one of those surprises which are waiting for you by the 5star hotel resorts by Playa el Duque on the island of all sorts of Spain architecture . 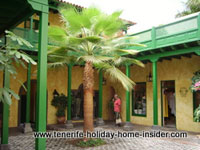 The Colonial architecture of this Spanish shopping and restaurant mall with 9 boutiques for hotel shopping on holiday is obviously most prominent by Tienda (shop) Luise Moda of Hotel Mirador.

There, wooden balconies enhance the top floor of an interior yard, while all is painted green.

This tint of an almost mossy rain forest environment is a color which is more typical with tropical architecture. 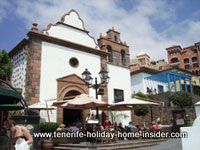 Discover an innovative café cocktail bar as a means of very smart hotel marketing strategies... This rather low key Fuente café is almost beside its more entertaining brother called Acanto. The Cafe Bar Acanto has a strong Spanish look, has live music at night, serves all the right drinks and spoils you with amazing Mediterranean snacks, ice creams and cakes. Everything is even available for the Tenerife tourists from
caravan parks.

Indeed, the beach sofa cafe outside the Costa Adeje hotel must be one more of new business ideas of Tenerife or just a new trend. There, any walker may stop and sit down to relax comfortably, until confronted by a waiter.

This is one of the resorts' four restaurants and bars which may be used by all. As said, they are not off limits for normal beach or coastal Adeje region vistors. In the meantime, they don't restrict the hotel guests to socializing within the hotel premises and gardens only. This is part of a very smart architectural philosophy which was given importance with Spanish architecture features of Iberostar Hotel Mirador as well as with Hotel Bahia del Duque. For sure, the ideas of the Bauhaus architecture period were implemented there by the latter by the intelligent architect Andrés Piñero. And you know, he also thought about special rooms for people with mobility problems, too.

By the way, it remains to wonder if the Gran Hotel Bahia del Duque has changed in any way. It has a somehow similar Spanish architecture, except for its unique tower. In 1997, it was said to be for very elite guests only who don't want to mingle. 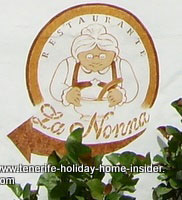 It was built in the style of a Spanish azotea.

There, best service from nearby kitchen is given by thoughtful architectural design.

Unforgettable la Gomera sundowns are part of simple long drinks or amazing cocktails, as you wish.

Meantime the Italian Restaurante La Nonna is a popular alternative. 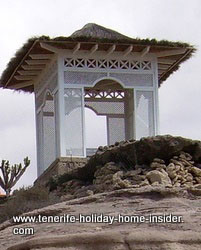 Many tall windows were curbed on top for a Venetian look. Towers and contrasting simplicity were to add the Tuscan touch. Balconies had to be plenty to adapt to a special Tenerife climate by the sea, as look outs and to justify the name Mirador. Mind, the hotel also has a small pavillon Mirador on a hill. Enjoy a duke's panorama from that hotel token all around you...

The hotel's colors are divided. Part of them are in a light tint, while the rest is reddish. It is as if to accentuate that the resort is indeed a tiny village with variety.

Also, the Spanish architecture which is seen on the outside is not only mixed with Colonial touches.  There are definitely also Maurish Moroccan traits with forms and colors reminding Marrakesh Terracota as well as the details and the tint of old chilly spice of some Indian Varanasi temples by the river Ganges.

Generally, eco friendly cream colored canvas shade you in all sorts of nooks and areas of the resort. Their color and  texture of natural fiber is echoed inside the hotel or by its pool bar and pool restaurant. Modern wellness facilities as well as a gymnasium were not forgotten to fit in with Spanish architecture.

It is unlikely, that only natural ventilation would be sufficient for a bigger than normal hotel resort, such as Hotel Mirador del Duque or the Iberostar Mirador. Certainly, conventional hotel airconditioning, which has been a part of 5 star hotels for almost a century, is there to stay.

Interior Designer Rosi Zamora contributed a peaceful holiday environment inside the hotel's 120 bedrooms and 11 VIP suites. Her subtle colors of white eggshell, beige tones and natural timber browns are offset by basket ware lampshades, cool cotton with dainty floral details and the green of Victorian chamber palms. All blends in beautifully with the Spanish architecture which also incorporates comfortable seminar facilities in architectural good shape for best visions and acoustics.

Photos with all sorts of Spanish architecture

See more pictures of architecture of Spanish style. which are by a Search engine...

From Spanish architecture back to Homepage

What Wikipedia says about the Gran Resort Hotel of Adeje