The car for your needs

My son is used to power cars.

In 2014, he drove us from Masca over the mountain to Santiago del Teide. He got mad. Why? The rented Kangoroo Renault had no pull. It was extremely frustrating for him to get up the steep slopes and around the incredibly steep Masca hairpin bends. 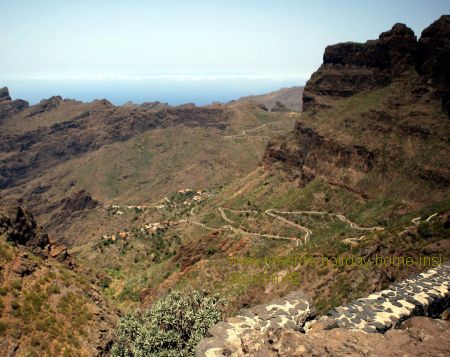 Masca hairpin bends steep seen from El Cherfe lookout
Rent at least an Opel and not some old one either if you plan driving up into the Teno Tenerife highlands. The same applies to a holiday home that is hard to get to. No real problem with the Teide Cordillera, though, as that road is a breeze.

Don't be put off by German car rental names above the counters. The car hire firms are international. Their employees speak English well.

However, it's not a good idea to think you'll get a vehicle there on arrival without reservation beforehand.

Why Tenerife airport car hires are so often booked out?

Also mind, that you absolutely need a car to transport your pets. Officially, animals are not admitted in Tenerife buses, trams or taxis.

By the way, be good! Give your dog a big blanket or better even a bed sheet, as not to dirty the hired car. Clean off any dog hairs by your animal which are left on the seats...

I have come across bad car rental in Tenerife. Then, exhausts showed already on several cars that their engines were rather old. The clutch and brakes of the particular car was not in good condition.

Would you consider to rent such cars because of extra low prices? To negotiate such cheap vehicle hire isn't worth it. This happened when a couple of Swedish girls and I did a trip to Playa de las Americas, a few years ago. The particular car dealer is still around.

You often read of families who took the bus from the south of the island to see attractions, such as Loro Park in the north or vice versa by others who went to the south. Often, they don't know that they made a mistake.

Lets assume that you pay in the region of €115
for a very simple 3 door car which you return in the
morning, 2 days later. This gives you two days and
nights with a rented car.
Also, you are free to come back late from trips, when
buses don't operate any more, generally. Not to forget,
the flexibility you are winning to stop wherever you
wish and to change direction when you fancy it,
while you can bring a bit more luggage or sports
equipment in the car boot.

Don't worry, it is very seldom that a traveler has his car stolen in Tenerife.

Escape routes are rather limited by the ocean all around it. However, beware car break-ins. Tenerife isn't immune to them.

However, always take your portable GPS car navigation system with you and don't leave it in the vehicle.

Computerized navigation systems are car rental Tenerife's best friends, as street names are seldom to be seen in time on the biggest of all Canary Islands.

Of course, an I-phone or smart phone is the perfect alternative navigator, nowadays.

Number one of traveler tips for the road?

Never let your son or daughter drive a rented car after a long trip. Even 5 hours of air travel may cause fatigue. A long time driver is always the better one, as driving experience becomes a habit. Driving skills go into the blood, you know. You are bound to be the better driver, above all when driving on a side of the road, which is a novelty for your children.

You may be lucky off season such as with Europcar in Puerto de la Cruz which is one of few recommendable firms in the North, in my mind. Europcar had a special in June 2014 for renting for the day to leave the car at the airport, for only €45.

Unfortunately, they only have an office at la Paz.

Otherwise, there is a company in Toscal Longuera in Tenerife North which has superb insurance and other conditions for longer stays. Unfortunately, it is totally booked out with repeat customers every winter.

Contact us and let us know if this interests you. 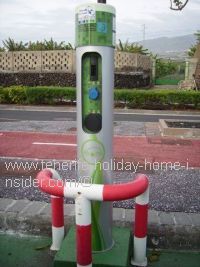 Electric car charge points
There are no electric cars up for rent on the island but you may bring your own. In fact, there are electric charge points in Tenerife South. I have seen them and they work. They are both for the Tesla as well as for the ZEO. Much research from my part was needed to find this out. Contact me if you like to know the result of it.

From car rental Tenerife back to HomePage of Tenerife holiday home Insider.