The Tenerife airports and what sets them apart

The first of Tenerife airports was that of Los Rodeos in the North long before it had two terminals but, the one in the South has become more prominent by demand. Millions of tourists spend short holidays in the South of the island.

The difference of both airports by sheer size

In fact, you get a good idea of the North airport size by looking down from its upper gallery. There, all its airline check-in counters fit into this one single space. 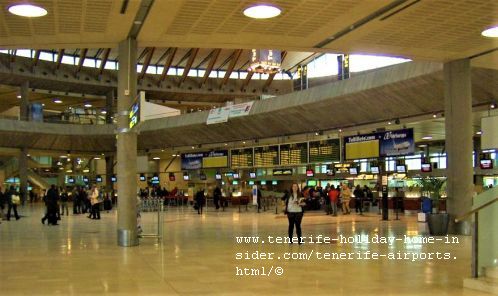 This is different in the South. To the contrary there,, several halls follow suite with seemingly countless flight carrier check-ins.

Expats who live in the North, such as Puerto de la Cruz, will always prefer this practical and friendly airport, above all to get to other Canary Islands which are all reached by Binter Canarias or alternatively by Canaryfly. So are people who have business in the capital Santa Cruz. An international fair at the Recinto ferial is only one of good reasons. Others may want to be near the Auditorium Adan Martín for permanent work or for occasional performances.

Unfortunately, Iberia express my favorite flight carrier to the UK has stopped to do direct International flights from Los Rodeos, as it made Madrid or Barcelona its stopover.

Transport means from the North airport 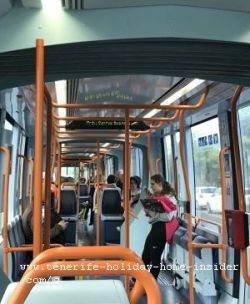 You can have airport rental car, take a bus or opt for the electric tram (not available in the South) by Tranvia with free WiFi to get to TFN to and from the capital Santa Cruz de Tenerife.

Mind the Tranvia stops at La Laguna before the airport. Catch a Titsa bus or cab for the short remaining way.

Obviously, car rental from and to your air travel hub leaves you more flexible, above all with an android or any other GPS road finder.

Trace San Cristobal de la Laguna the romantic town with old quarters for Tenerife vacations with a difference. It's closest to the TFN airport.

Its opening hours have been extended to 11 p.m. by 75 minutes. This will allow for direct flights with additional 5 mainland Spain destinations besides Barcelona. Vueling of Iberia has been one of their flight carriers since January 2014. Other international operating airlines at Los Rodeos are Air Europa, Norwegian and lately also Ryanair.  By the way, the 7.a.m. TFN opening time will not change.

Getting to the TFS the Southern one of Tenerife airports

Car hire Tenerife at its airports?

Encounter information on Tenerife car rental  with tips and recommendations

How to mind rush hour traffic

For example, leave Puerto de la Cruz before 7 in the morning to avoid traffic congestion on the way to the North airport. Hopefully the planned trains will solve this problem in the future.
The direct Titsa bus 343 leaves at 6.30 subject to change in Puerto de la Cruz and goes all the way to the Tenerife South Airport Reina Sofia. The difference in driving time may be from 1h50 to 2h30 when traffic is heavy.

New Aeroexpress Titsa service for both Tenerife airports since 2018

Services at both Tenerife airports

There are several luxury hotels in its neighborhood but none within the airport. I very much like the central town as well as beach location of the Medano Hotel on drywall stilts although it's a bit dated. I have been to the Hotel Monica aeropuerto Sur which seems to have been lacking in good service for a while, as told by a friend.

Estatísticas Aena.es gives you those but they are not meant to be copied. Otherwise, it's said that about 5 million come to Tenerife every year.

It's of the highest international standard. Also, there's an emergency army fire unit of 90 professional fire fighters on standby stationed in close vicinity.
This has been implemented by the Spanish Government as promised after the great Tenerife wildfire danger of midsummer 2007. This is also interesting, as Los Rodeos airport has a fatal flight accident history of March 27, 1977 when two Jumbo Jets collided. This was partly due to bad visibility.

Nowadays contrary to 1977, Tenerife airports are equipped with the most sophisticated software for weather information and flight safety by a flight security system hosted at Helsinki which coordinates 17 airports within Spain.

The Weather at both Tenerife airfields

The region at the Tenerife southern airstrip is usually sunny and bright and will greet you with picture book blue skies and sun bathed,  subtropical surroundings. There,  people usually change into summer travel gear. Los Rodeos is not like that. Always have a warm jersey or jacket handy, just in case. A slightly chilly wind or clouds aren't unusual.
Read my insider info  about the weather where the region of the Tenerife North Airport is interesting.

Always book in advance airport transfer with or without shuttles including Tenerife airport taxis and luxury mini buses...

A lovely travel review of our  Tenerife transfer to Puerto de la Cruz  the only long distance airport shuttle travel, I ever did.

From Tenerife airports back to getting to Tenerife with multiple options

Discover more information about both the airports of North and South Tenerife by your best source which is the aviation company Aena.es

and set you on your way to explore a unique Spain