Enticing Tenerife culture Meson Monasterio with more on its island

Tenerife culture of all sorts is given priority in all the island's bigger towns.

Each of them has a Casa de Cultura a House of Culture.

Its possible Subjects of art and culture taught and practiced.

Exhibitions follow suite. Some also have auditoriums to stage concerts, theater and other shows. Of course, museums and libraries also give cultural status.

The culture and importance of children literature

Mind that the art and culture of good story telling as well as illustration of its literature forms part of vital education and much more for our young ones. This could be from national and international folk tales or those by Walt Disney. 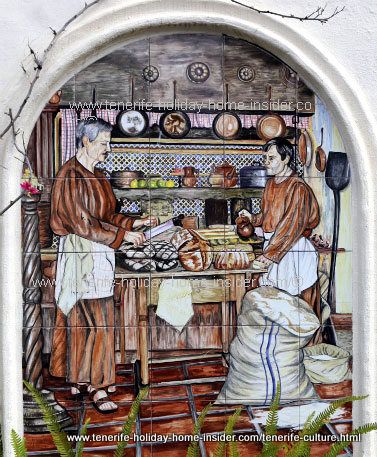 Meson Monasterio is a fun topic for this. Indeed, it started long ago. With bread baking monks.

Back to our prime example of Meson Monasterio culture of Tenerife 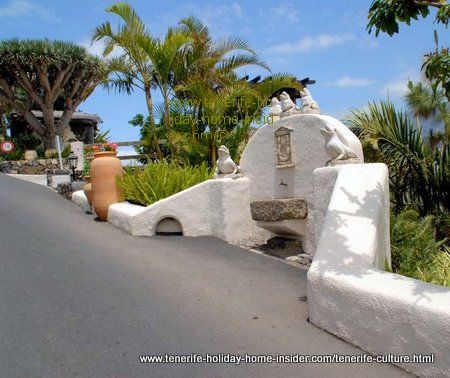 Road altar with fountain a traditional reminder of the past at the entrance of El Monasterio park. 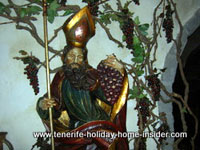 A religious statue at Mesón Monasterio gardens in Tenerife.

Other wayside monuments portray nativity scenes, a small altar or a fountain. Many represent the island's  Catholic faith which goes hand in hand with Tenerife culture. It's even taken to the streets.

There is also the Montañeta park's biggest restaurant. Admire it by the Meson Monasterio Photo.

There, a gracious, curbed stair case outside is part of the highly pleasing architecture. It hints at a gracious life style of wining and dining. It's to be enjoyed at the price of a supper or a lunch in halls behind. This however, was beyond reach for humble friars of the past. 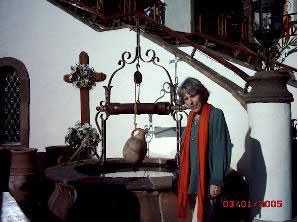 Outside Hacienda San Pedro of Meson Monasterio with artistic details

Bodegas on the biggest Canary Island may be real cultural icons, such as the one in the background. More so when an interesting museum is attached. There, all kinds of gadgets for distilling  are displayed. However, the tradition of wine making is not alive any more in this place of historic monks. 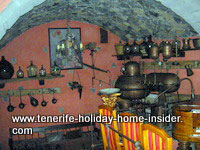 The Monasterio wine distillery museum has most detailed, precious equipment, as is depicted beside.

Its wine making kit is astounding. All is neatly displayed on shelves or attached to bricked-up walls. Its tradition is like an art.

It is housed in its own building with many details of colorful wall drawings.

Related picturesque sculptures and ornaments seem to idolize more than its cult.

Antonio the legendary monk who has laid the ancient foundations for Meson Monasterio is depicted with a message on the wall.  Monks are known to be experts on wine.

Ancient habits and merry go round may be sensed in the building behind with medieval halls under low, arched ceilings. In fact some of the structure is old indeed and goes back to the founders days  when a convent was on the agenda.

There, uncomfortable Spartan tables and benches were replaced by more comfortable furniture in 2014. Hence now, its upholstered  chairs are more attractive for wedding caterings... 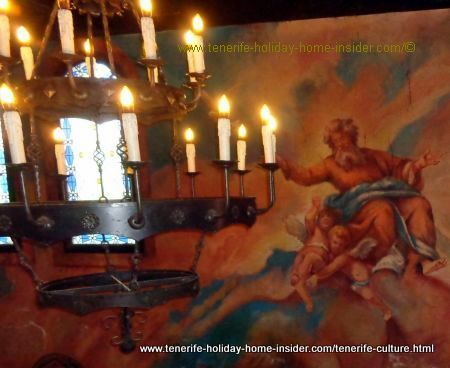 The Meson Monasterio mural which is one of two by the stairs to the ancient looking Bodega of the basement has that classic look one would rather expect in Rome, Venice or Florence. Those paintings are epitomes of high class. 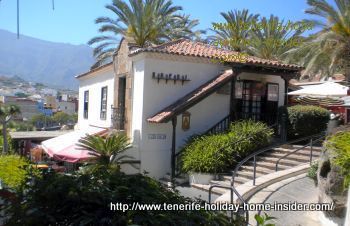 It stands for the never out of date cult of good food and drink where health plays an important role. 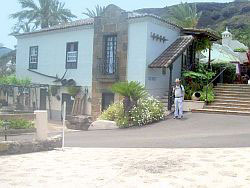 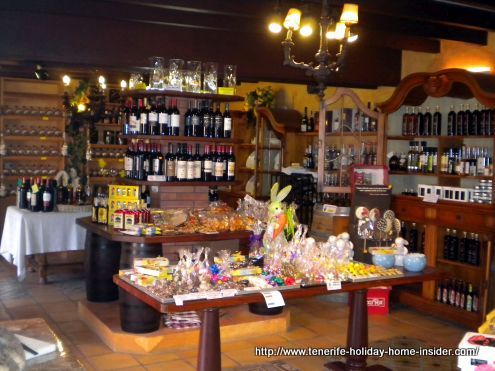 Sold are culinary delights and house brands like bread, pastries and sweets. 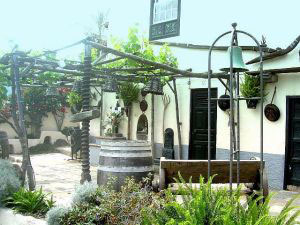 Casa del Rocio has architecture which reminds the French Provence. So do the many farm gadgets that decorate the exterior under genuine vines. 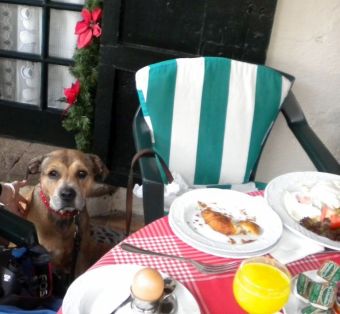 Our Jesse at our champagne breakfast at the Monasterio on Christmas.

Behind Casa de Rocio is a breath taking patio which is typical for the upper Middle Class of Tenerife culture when it socializes outdoors.

Sunday champagne breakfast are its non plus ultra where even dogs are now part of that culture. 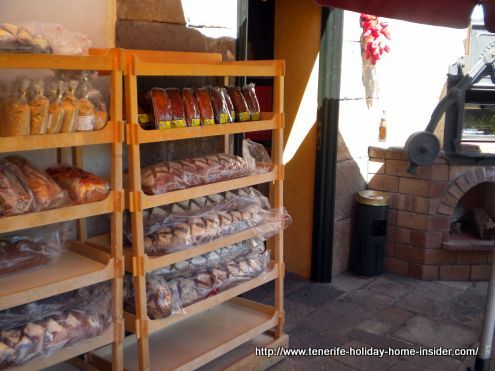 Farm bread a Monasterio house brand where a pizza oven is ready to be used on the side. 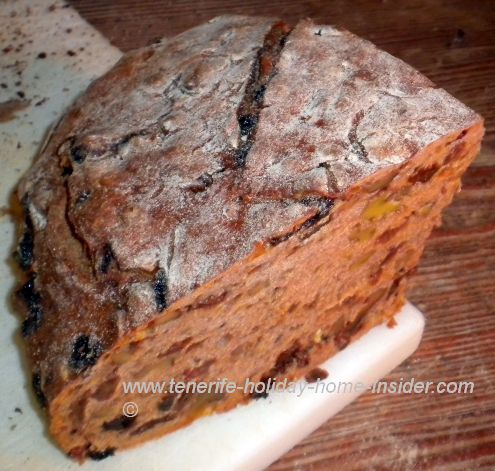 Love of landscaping with selected plants is not only to be noticed there but everywhere at the Monasterio gardens that resembles an extraordinary, picturesque village.

Often, the  country style inns have small porches with verandas in front. Spot the Canarian Drago tree a much loved architectural accent plant. Vines grow on trellises. Wrought iron craft works are everywhere. Wooden farm utensils are pegged up on walls. There are big metal milk cans, wine Amphoras and other pottery made of clay.

Small farm equipment like wheel barrows, shovels and agricultural folks add to the rural mood. Look out for an ancient Gofio grinding stone... Everything is genuine and well cared for, almost, like in an open air museum that celebrates Tenerife culture and customs. 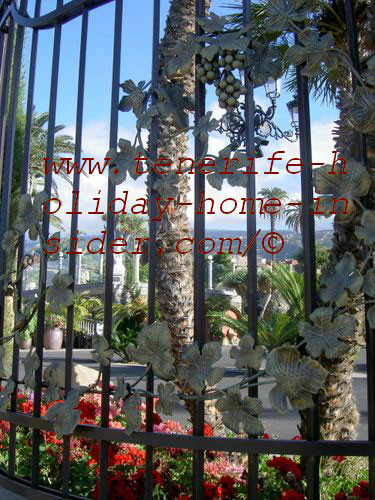 It's the other gigantic estate Hacienda (Meson) San Sebastian of the owners of El Meson Monasterio. It hasn't been made public yet. Locals say that it will comprise a top Tenerife gourmet restaurant. 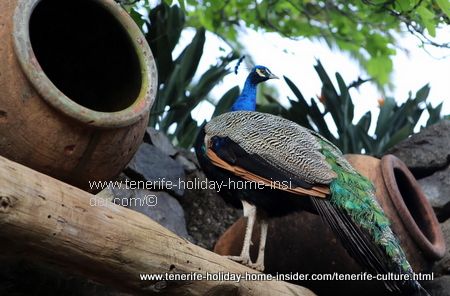 Rustic culture with dedication to nature at Meson Monasterio depicts a pheasant in unusual habitat.

Tenerife links of topics for socializing.

From Tenerife culture back to Monasterio

Wonder if Canabis Tenerife may also be kind of culturally accepted as may be the case in Spain here There is a shop or rather a club in La Longuera already.