How ancient and solid is El Monasterio really? 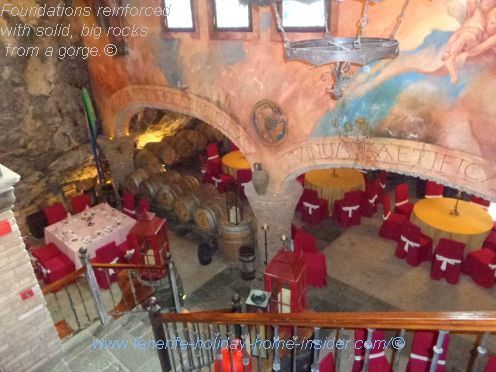 El Monasterio the Meson with huge Bodega built to last and reinforced with big rocks from a gorge. Click to see more...

Many of you know El Monasterio the Mesón.

Obviously, it didn't always look like now. Nevertheless, everybody thinks that the sturdy, almost half a meter thick arches of its so called Convent salon must be genuinely old and must have been part of a monastery. By the way, that's the only part that's of real Roman architecture. Other buildings show a mix of styles, except for the use of simple, small windows. 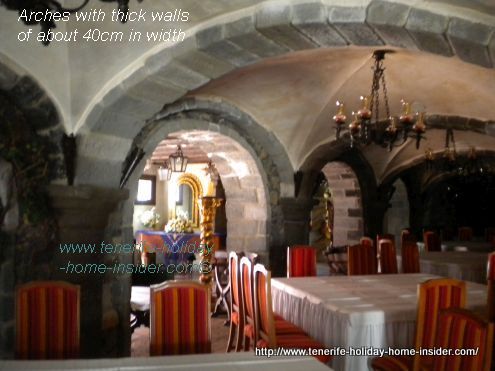 Indeed, most of this section is said to be very antique in Tenerife terms but, needed repairs.

Basic restorations of the entire estate took up five years after 1989. A new Tenerife attraction the foundations of which had been laid by a monk, a long time ago, was ready after another decade. Then, Messrs.Columbus S.A. a family business share holding company had finished adding most of today's captivating details including landscaping. 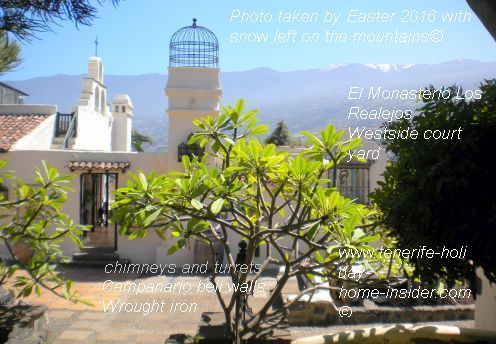 They were charming architectural features, hence accents, such as turrets, chimneys and campanarios for bells in single walls. There is expertly crafted wrought iron outside tiny windows, for gates, bird cages and more.

El Monasterio's upper North building on the slope before and after. 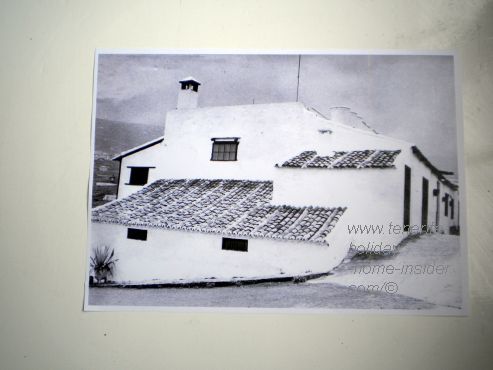 Original Meson el Monasterio before 1989 -View of upper section with a long building.

Depicted above is the Before. Portrayed is the unadorned Westside upper Monasterio building which may have been, sleeping quarters as well as stables originally. 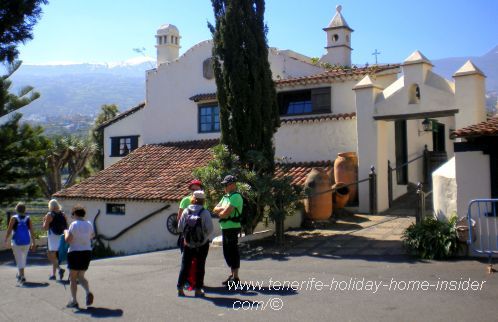 After 1989 shows the Monastery Northside of the building complex.

Make out architectural accents that embellish the building. This includes an archway to a novelty courtyard with surprises. All that is new.

In 2016, the Tenerife holiday home insider decided to do some research. She wanted to learn some facts that relate to the quality and age of the so called Monastery built by Antonio the Gomeran monk.

Don Siverio the man who is in charge of archives in the town hall of Los Realejos knew interesting things about the matter.

What could be learned at the Ayuntamiento Town Hall?

Lay Brother Antonio's constructions hadn't only demanded an extraordinary effort by the men who helped to build it. It had meant many trips by the determined monk to collect donations of wine and baby bucks i.e. the billies to be sold or bartered for fruit in La Gomera.

All in the name of the Madonna de Candelaria to create her a convent on the foot of the sandy Montaneta de los Frailes.

The terrain of the ancient volcanic cone was not easy to tackle. Lose sand and dead, slippery gravel demanded extra strong foundations. Outstanding stable buildings were the reward for it.  They were to serve many monks as refuge, later. This happened before, during and after the Hurricane Bethencourt y Gonzalez of November 07 and 08 of 1826. Then, 298 people were killed and 651 houses were destroyed during extreme wind and floods.

Hence in general, the Realejos Mesón Monasterio could very well be as much as 250 years old by now. It's in extremely good condition. This cannot be said about several other historical buildings in Tenerife.

From El Monasterio back to Los Realejos

Unfortunately, there is nothing about monasteries in Tenerife in English online that may improve facts of this article. Monasteries in Spain in general may be of interest