The glossary for Spanish real estate does not show condos or flats, as those words are not used in Tenerife real estate. You may see casa de vacaciones Tenerife in rare instances which is a holiday home in Tenerife. 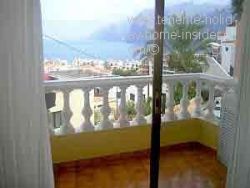 Los Gigantes Resort property
Did you come here by mistake? Do you rather want to see a resort property to buy? Here is a stunning Los Gigantes property going cheap directly from owner, as he already works on another island.

There is also the Tenerife apartment Apartamento Tenerife Panorama Puerto Cruz Realejos in holiday resort. Apartment sale for only € 49000 negotiable for health reasons. 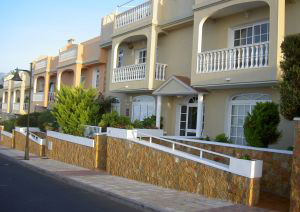 Townhouses
Depicted is a row of modern townhouses called Adosadas. They take up a big chunk in real estate in Tenerife.

The inside and outside features of them vary. Usually, they come with small balconies.

Not all new Tenerife townhouses
represent top Spanish architecture in residential areas. However, they almost always have roof gardens (azoteas) with penthouses called aticos. An interesting article is dealing with the relation of azoteas and penthouses.

Read a review of a penthouse near Puerto de la Cruz...It may be an apartment of any size. A penthouse called ático in Spanish is always on the last floor. No other apartments are above it. Some Tenerife áticos are on top of a flat roof building.

The private grounds around a newish townhouse are rather small.

Not all have garages. Some have a backyard patio. Olden day townhouses have indoor patios and sometimes also back gardens like some old amazing townhouse in la Orotava Tenerife . Some, even have a cellar in the basement. Some have a tiny front garden. Others are paved up in front. 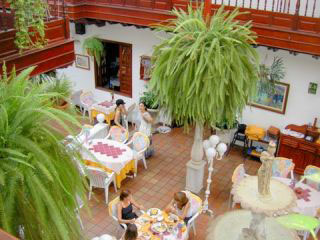 La Casona mansion
Some casonas are restaurants today
like the one in the photo of Puerto de la Cruz. and they also have very inviting house fronts. You are seeing
only a small part of the very large indoor patio of the restaurant La Casona Tenerife with its tables and a fountain.

The upper floor
all around the patio
makes for height.
This is typical for a casona. This casona belongs to antique real estate in Tenerife.

Casonas may also be
small hotels nowadays like the one in the picture below. Real estate agents have rather large fincas in Tenerife (farms or country estates) on their books, today. They may be turned into country hotels or anything else which makes good business for tourism. Casonas are rare jams to get hold off for purchase but, are, at times, available for business rent. 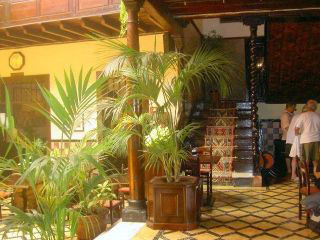 Casona Hotel Marquesa
Casonas, such as the depicted small hotel La Marquesa of Puerto Cruz, belong to the finest real estate in
Tenerife when they are
renovated well.

This casona is also a casa adosada (townhouse) because, there are a row of casonas attached to each other. All this is right in the hub of the oldest Tenerife resort in the north of Tenerife in Puerto de la Cruz in Calle Quintana.

Not only the modern resorts by Las Americas and Los Christianos offer many studio apartments. Puerto de la Cruz central has many. See some photos of different types of self catering Tenerife apartments, very close to the oldest Tenerife resort. The latter serve tourists and residents who want a different setting, which is less touristic. 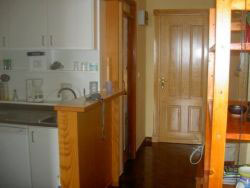 Semi separate kitchen
A studio in Tenerife may have an open plan American kitchen inside the living room.

I have seen a studio that had 3 cupboards with a couple of built in hot plates as well as a sink and, a small fridge within the entrance passage. The kitchen may be semi separate like in this picture which is more rare. This kitchen can't be seen from the living room.

A studio may have a separate full bathroom. However, it may only have a shower cubicle, toilet and, wash basin. The smallest studio I have seen had 26 square meters.

Information on the Backpackers' lodge 'Refugio del Teide' may be found in page`for do it yourself Teide tours.

I have seen a few cabanas not far from Agua Mansa on the Orotava Teide mountain road. One of the cabanas burned down in the forest during Tenerife wildfires in 2007. One could see the cabana's debris and left overs of furniture in a Tenerife newspaper. 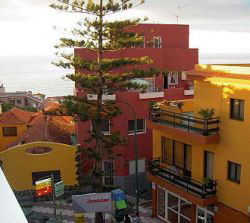 Edificio (red) and tiny Casita(yellow)
Tenerife apartments are often in new buildings that have a name.

Such a building is then called Edificio (building) Carmen or whatever.

Please, note that you must never forget to write down the name of a building in postal addresses... Street names and numbers are often hard to find by a postman. He is rather orientating himself with names of buildings or, bars nearby. That may sound funny, but, it's true.

Here, you see a red Tenerife apartment building which is not old. To the left of it is a lovely yellow painted 'casita' (small house).

The Tenerife house on your right doesn't have a building name. But one may see its house number by the front door. That house has 2 pisos (2 floors.)

By the way, apartments are often called pisos or viviendas all over Spain. In Tenerife the term apartamentos which means apartments is rather used for a flat that has not more than 2 bed rooms.

You should not encounter any racism related problems when you want to buy a holiday home in Tenerife, buy commercial property or, when renting real estate in Tenerife. Not to squeeze prices too much will help also, of course.

In case you have not clicked above on townhouses in La Orotava would you like to see some great photos? Traditional Tenerife townhouses inside where you can also get an idea on how wealthy people were living in past centuries.

Why there is a shortage of luxury apartments in Tenerife which means apartamentos de lujo and where to find them is only a review.

Learn what a condo is like, contrary to a studio by info about apartments in Toronto for rent

Important to know
The word 'residencia' (residence)and related expressions are not used in real estate in Tenerife Spanish terms. It is only applied to an old age home (residencia de tercera edad) or for on campus student accommodation. One calls everything by its proper word in Spanish as outlined above or, one uses the term 'propriedad' which is property or 'inmobiliaria' which is real estate.

However, the same terms are not used when applied to taxes. The Spanish language can be a hard nut to crack when it comes to real estate in Tenerife.

From real estate in Tenerife back to HomePage Tenerife holiday home insider.