Restaurant la Casona, called Restaurante La Casona in Spanish, is an amazing eating house, where I like to have meals in summer or winter.

It is conveniently located in the hub of the oldest Tenerife resort Puerto de la Cruz, right on Plaza del Charco de los Camarones at Number 13. Call to reserve at +34 922373422... 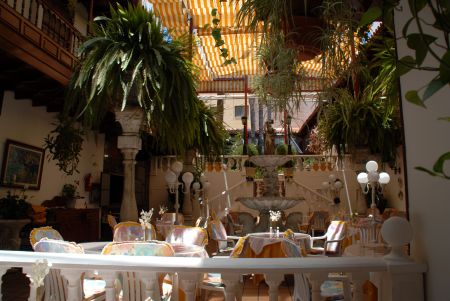 La Casona is a typical Canary Island Restaurant with international cuisine for fish as well as for meat.
It is in a mansion with traditional upper floor indoor balconies. It has elaborate columns, a fountain, comfortable furniture and many hanging as well as standing pot plants. Ravishing sky-lights above a very high indoor yard give it excellent day time illumination.

High society owned it in past centuries. Now, it is renovated to perfection to serve for eating out on the town.

I much appreciate its restaurant size, style, decor, variety of food and drink and excellent service. It is one of Tenerife restaurants, which is one of my favorites to introduce friends to. 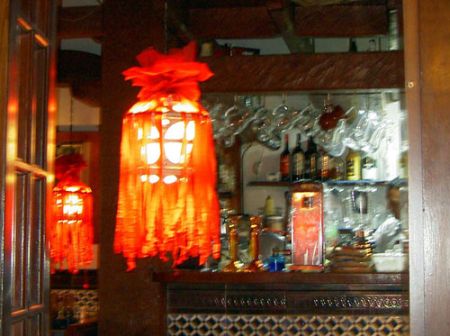 Food of Restaurant la Casona is not only served in its indoor patio. You can order it outside on the veranda, where you may also just take coffee, snacks or some drinks. The same options apply to its cozy indoor bar. We could glimpse its lamp carnival decoration from where we were seated, when we ate there.

A couple was sitting next to us outside the bar window within the main restaurant room.

They were enchanted by the restaurant's beauty like my friend Petra, who is depicted with a red carnival wig depicted beside.

Petra Molkenbuhr, my friend, is a well known modern artist from Hamburg Germany. She adores surroundings with flair, such as Restaurant La Casona. Indeed, the Casona mad season gear and her own according outfit set her into even more carnival mood.

See her happy admiring gaze, while she looks with one eye through her crazy carnival glasses... 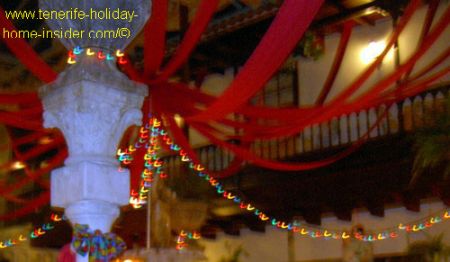 La Casona is not only a Tenerife restaurant, where you feel good in February with its big and bold restaurant carnival decoration of 2010. Large red ribbons criss-crossed under the whole ceiling. Funny pictures fit for the disguise season were on the walls. Also, multi colored led lights celebrated carnival everywhere at Restaurant La Casona.

What about Restaurant La Casona's guests?

Going out in Tenerife to La Casona is not only for the rich, who have the most delicious seafood dishes and best wines on their tables. Students are just as welcome. They can select cheaper dishes, such as Italian Lasagna or Pizza.

Most foreigners with a holiday home in Tenerife know Restaurant La Casona. They go there occasionally during their Tenerife winter vacations, even during recession. Encounter more locals and the mainland Spain Spanish there in summer. By the way, they much like the tiny fried Casona fish, which have an acquired taste in my mind. They are crispy and salty. 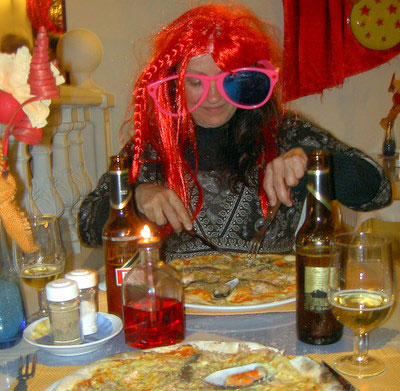 We too, were selecting pizza. However, this seafood pizza was not the best, which we ever had. I have eaten Casona pizzas before, which were more to my liking.

But who cares, when you can spend an evening surrounded by content looking dinner guests in an outstanding surrounding? More so, beautiful live jazz was on the Casona agenda on that evening. It was enchanting. Some people took to a small dance floor, which was very romantic.

There was a note by the door of Restaurant La Casona for live jazz entertainment on Tuesday and Friday nights.

Later, I asked the multi lingual lady presenter of the group, if there was anything known by the band online. She denied and told me that this was planned for the future. However, my friend Petra told me, that there may be royalty problems to do so, as the group played only copied jazz music from celebrities. The band was mixed with musicians of different nationality, while the presenter contributed with beautiful songs. They gave us a superb performance of varied jazz at Restaurante La Casona. Its style was ideal for a relaxing evening over supper and for dancing. Hopefully, this jazz ensemble will perform during many more months at my favorite Plaza de Charco dinner place La Casona. I may then add it as an alternative to events Tenerife which is about live music in Tenerife hotels. Also, their style was very different from Tenerife jazz with Blues by Anna Rodriguez, which you may follow by Spanish news.

We not only had a pleasant carnival meal but, also enjoyed music entertainment, which had come as a fantastic surprise. If you were asking my honest opinion about this restaurant's food, where I ate often, I would tell you that you get absolute value for money. There are slightly better but, also more expensive Puerto de la Cruz restaurants. However, hardly any can match the other advantages of Restaurante la Casona.

From Restaurant La Casona to Tenerife restaurants to more inspiration for going out in Tenerife.