Much Spain art in Tenerife is standing in the open.

Spain art in Tenerife stands on Plaza de España, the central town square, like a lost tourist looking out onto its new lake. 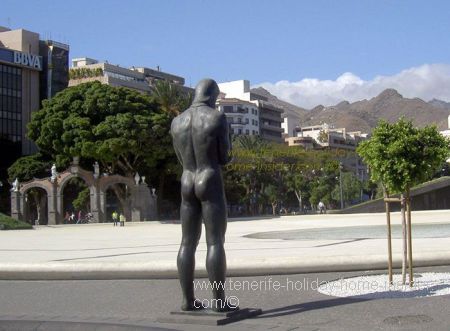 Spain art in Santa Cruz Tenerife
Two giant black sculptures are positioned in the open. What better street art could there be? Everybody can see it and touch it.

The photo shows you a Guanche sculpture from its back. No artist name
is marked on it. It was created by Enrique Cejas Zaldívar (1915-) who called his work El Gerrero.

The brick works of an ancient castle gateway supply olden days contrast in the lake background. This whole town square called plaza has become a piece of art. 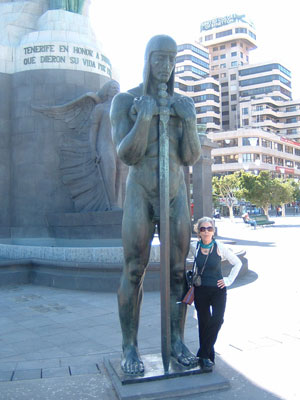 Compare the more than three meter high monumental Guanche to my size, as I stand exactly on the same level of ground...This modern sculpture of Spain art in Santa Cruz shows an indigenous warrier and  how he is honored, now.
The size of the sculpture represents a great human being. I call it statue for liberty despite the weapon.
It's an artistic reproduction of a handsome, very dignified man with attractive face. The crude weapon represents a very big stone age stone age war tool. Note,  how this well made lance ends in the shape of the cross...  The man's facial features as well as his nose remind those found in ancient Roman or Greek statues. Pablo Picasso, the famous Spanish artist,  was good at drawing noses like that.

The  Monument behind which is not depicted is a classic landmark.

However, the idea of the single Guanche statue which stands where pedestrian walk has so much more artistic appeal.

By the way, the Guanche,  who was, realistically,  reproduced in bronze as Tenerife Spain art is all the more impressive. 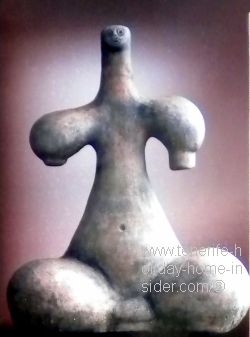 Only its giant sculpture size makes him super human.
His neolithic people fell with him to defend freedom. In fact, the Guanches lost their liberty.

Discover interesting little modern art sculptures of the Guanche fertility goddess Chaxiraxi. Actually she is an adoption of the Tara from Gran Canaria.

You find her at the Casa de Artesania' of the' Casa de los Balcones'. However, the Tourist office shop at Casa de la Aduana in Puerto de la Cruz seems to have more sizes for sale. Also there, the sculptures are available in two colors.

The following mural seems to have taken the space of the Graffiti below it.

It's remarkable that the colors of the building on the right and the new Santa Cruz mural in the street blend in so stunningly. Also the white wall behind sets off to perfection the black base. 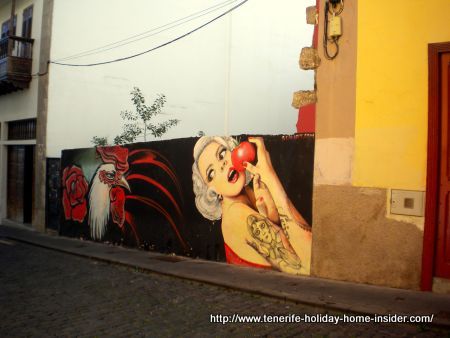 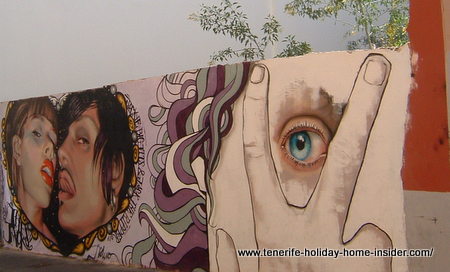 No big Spanish city is spared such murals.  The colorful heads of a man and women are facing each other in this image. This street art painting is very realistic. No idea what the hand with pointing finger symbolizes beside it...It looks like this street painting is seen as Spain art in this neighborhood, although it's quite close to Plaza de España. 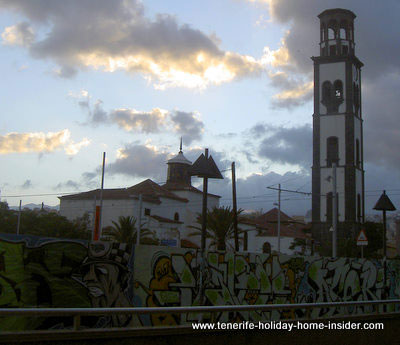 Graffiti or street art by monuments?

An amazing picture of a large wall of Tenerife Graffiti street art is almost facing the venerable Tenerife Museum of Man and Nature  in Santa Cruz.

This painted adhoc mural is not more than a 10 minutes walk from Plaza de España. The historic buildings of Church Nuestra Señora de la Concepción are behind the Graffiti, which please, click to enlarge... This and the old tower from year 1786 give you a picture of Tenerife history. However, this particular work may be perceived as the spoiling of culture by modern art that's aggressive. The mellow evening light rounds off an aura of gloom.

Some of this Spanish art is dedicated to the unknown or to celebrities.

Discover Santa Cruz Tenerife  abstract art  in an ordinary street of the capital.

The cut off head which stands on the street floor in front of a bistro bar looks rather weird,  but modern. Encounter it in one of the side streets near the commercial city center where the Guanche bronze sculptures were displayed.

You find street art sculptures on many a street corner in the Tenerife capital. This is different from what I have seen on mainland Spain,  such as in Denia. While Spanish street art there was often made with rough black metal,  sculptures in Santa Cruz are mainly made of stone or bronze. 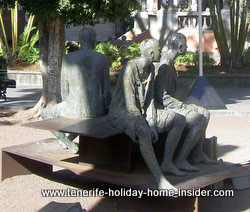 Turning into road Calle Villalba Hervás you arrive at the town square Plaza del Principe behind San Francisco church. There is a precious little park with old trees and a pavilion in its center.

Notice its unusual modern sculptures of Spain art. More are in other corners of the park. They look like gray men who are resting from work.  This little oasis at Plaza del Principe is behind and to the right of the Plaza of the giant Guanche sculptures. It's almost facing the first Tenerife Corte Ingles which was closed for good in April 2015.

Plaster of Paris in art 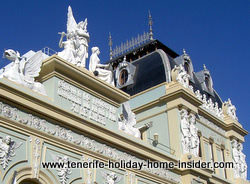 Behind the large trees of Plaza del Principe Park is an amazing light blue building with many flags.  This big colonial house shows countless sandstone sculptures and tiny intricate facade decorations which beautify it. Plaster of Paris has been used lavishly. This almost white classic art covers the building, contrary to the rest of Spain art,  shown in this page. Click the photo to see this artistic display better...

It represents the so called second empire architecture of the Canary Islands. Its theme with slender ladies, angels and dragons is a mixture of Greek classic, Baroque and Spanish colonial art. The latter is not quite the same as the Portuguese Manueline art,(arte do Manuelino)  which dates back to the times of overseas discoveries and conquests. But, the intriguing Spanish art is as interesting as its Portuguese art cousin. The sculptures were done by Edouardo Tarquis and Teodmiro Robayna. The architecture is by Mariano Estanga a Castellano who created countless buildings in Tenerife of highest artistic level.

The building belongs to a private club called Circulo de Amistad XII de Enero. (Friendship circle January XII) Tenerife Clubs like this had started to be trendy since the middle of the 19th century.
Unfortunately, the shows and events of this private club are not free to see for everybody. 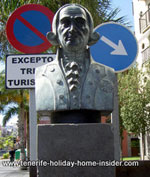 Look at this colonial bust upon a stone base by a busy street of the Tenerife capital.

The two traffic signs behind it almost frame it. A bizarre, comical affect in this context of Spain art and commemoration of a historic town figure...The latter is also to be found in the same vicinity as all art examples above.

Of course, there is much more Spain art in form of sculptures to be discovered on bridges, streets and town squares all over Tenerife Island. 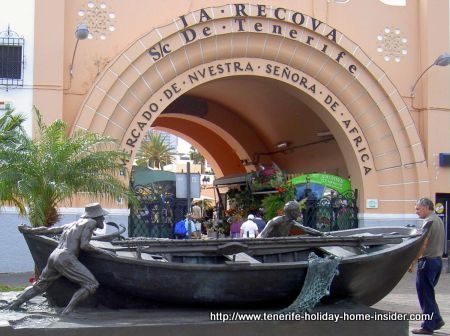 Fishermen and boat at la Recova

Depicted above is life size art by Javier Murcia.  His sculpture with three parts stands in front of La Recova the Santa Cruz Market Nuestra Señora de África. The market would not be able to sell its outstanding seafood without the hard work of the fishermen.

Next comes a woman with a basket full of Terracotta pottery besides a metal can. She carries the heavy load on her head. This sculpture gives homage to the Santa Cruz Carnival character known as the Milk maid. It was created by Julio Nieto whose latest works are all made of metal, such as his world famous Icarus. Much of his creations contribute to Puerto de la Cruz street art.

She is one of latest additions of  live size figures of all kinds or working women. They all belong to the art of realism. This Spain art form makes you familiar with
humble women who contributed to society in the past. Click the photo beside for a better view of this contemporary art...

It surrounds a floor sun clock in this huge Park. By the way, this trophy of a garden within the Tenerife capital displays good Spain art, such as metal and stone sculptures inside as well as outside by the park.

Not to forget is that Parque Garcia Sanabria Santa Cruz has a permanent flower carpet.

Spain art for museum as motto

The museum of Man and Nature ( Museo de hombre y de la naturaleza) sums up the essence of its treasures by combining nature with three sculptures to greet you at the start with Tenerife museum art. 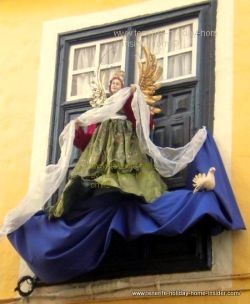 Click the picture to discover more about these unusual and extraordinary, artistic displays in Puerto de la Cruz.

There, also encounter the biggest nativity scene exhibitions of all Canary Islands. 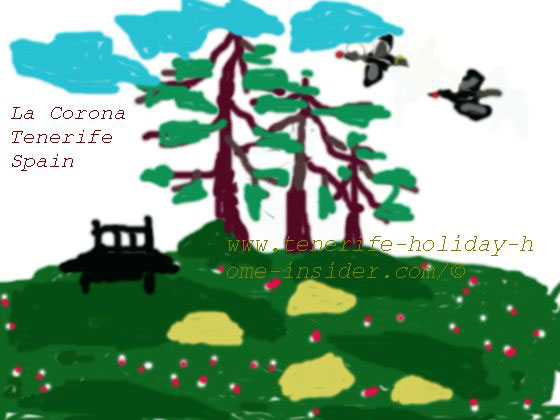 Please, do let us know in comments below and share such creations. Or call them arts and crafts or illustrations?

The picture beside was such an attempt. I did this color Photoshop drawing exercise in  computer school, many years ago. It portrays La Tenerife Corona. That's the border of the island's forests when the crater Cañadas del Teide takes over. This computer art creation of the webmaster of the Insider for the holiday home in Tenerife should be seen as an interesting try. Right? Be welcome to comment to it below...

Links of all sorts of art, design and crafts in Tenerife Spain

Care for the environment by ecological art

Graffiti of Tenerife Spain where the portrait of a boy reveals rather fine art.

Carmen Amaya the legendary Spanish Flamenco artist and one and only

Discover the newcomer Tomas of Spanish artists with his Spain metal wall art...
Mind that he shares his name Velasquez with one of most famous Spanish celebrities.

This is according to first hand information

Ask the following webs that they may change to https before you send your data to them which won't be safe with http. Just looking at the sites may be OK, though, but one should not type their urls in a safe site like Tenerife holiday home insider.com

From Spain art back to holiday home in Tenerife HomePage