Tenerife attractions' art shopping is even found by Tenerife beaches. 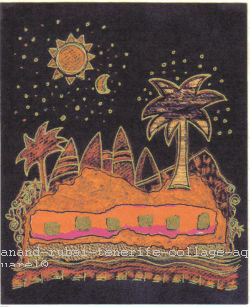 Purchase art from artists like Rubai Angelika Kellersmann. She produces Tenerife Art. Buy her art such as this Tenerife collage. Layers with Tenerife bark and all kinds of other natural materials are used in her works. Unfortunately, the photo doesn't give credit to its unusual creation. Contact her at anand_rubai(at)gmx.net.

You can also buy many of her Rubai designs here

The volcanic and warm Canary Island of Mount Teide  is ideal to get energy and art inspirations.

I know of six foreign painters in Tenerife who all swear that the island gives them not only more ideas but, also more energy and health to create more art as Tenerife attractions.

A street painter who is part of Tenerife attractions for art shopping.

There is a Spanish lady, a neighbor of mine. I talk to her whenever I meet her in my street. This went on for several years. Only now, I know that her husband is Julio Puentes. He is one of best portrait painters on the beach front by Lago Martianes in Puerto de la Cruz. Doing street art there, he must have attracted millions so far, Many of them stop to look. Some have a quick sketch done. Others order a portrait in oil which he does in his workshop at home. Of course, Don Julio isn't the only artist who paints on Avenida Colon by the famous Tenerife pools.

Watch how the expert painter Julio Puentes does a portrait...

Artists being Tenerife attractions whose addresses I know. 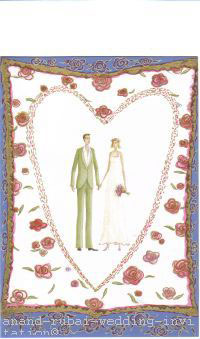 Many a painting or collage by Rubai Angelika Kellersmann reflects a Tenerife topic, such as her work Teide Tenerife collage at the start of this article.

Rubai Kellersmann who is also seeing her hobby as art therapy exhibits and sells her collages not only from home but, also in special restaurants such as Restaurante Las Palmeras Arte, occasionally.

Encounter more galleries for purchasing art in Tenerife at the bottom of page Puerto Cruz Tenerife culture here and learn about a big financial institution who sponsors artists and exhibitions...

The little west coast town San Juan de la Rambla is called a Tenerife artist town and so is Garachico which is also a town for art shopping, although less than before. 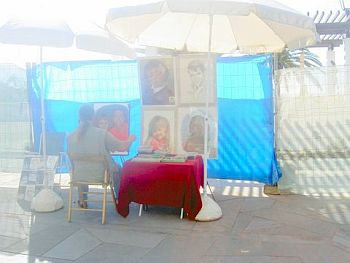 Paseo San Telmo Puerto de la Cruz usually has its portrait street painters right by the beach front. They do YOU or your doggy while sitting in the open with a makeshift stall that protects against the sun while busy with pencil and brush. Others
do caricatures or, landscapes, there.

Some Peruvians on San Telmo beach front, who are dressed the part, play Inca music with flutes in Puerto de la Cruz. They have relevant CDs with their music art work on a table to sell it.

The Peruvian musicians in Puerto Cruz are an attractive and popular Tenerife attraction.

Some African men sometimes offer wooden sculptures in the same spot. It could be art; it's hard to say how original those things are. They may even be machine made.

Attend famous Tenerife attractions of folk music festivals... Try to buy the folk art CDs by their best musicians, who are called the Sabadeños... Some such CDs may be found in music shops on the biggest of all Canary islands.

Art shopping in any odd place

You stumble upon Tenerife attractions for art shopping in ports, in forests and by Mount Teide. The artists often prefer the Canary Island open air studio to an indoor atelier as an attraction for art selling.

If you like what they produce, ask for their phone number... Art shopping is always welcome later, just as well.

Buy art from Canary Islands' youth in the Tenerife capital from Dec., 17th 2009 - Jan.,5th, 2010...Supermercado de arte (Supermarket of art) sells mainly smaller paintings from €50 - €300. Locate it downtown at Casa Elder, C/ Castello by Plaza de Candelaria... This art sale has made itself a name since 2003 by art awards received by some of the artists. 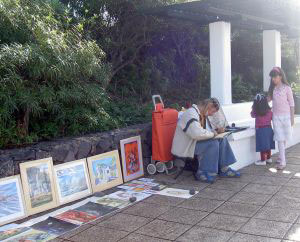 Some time ago, I saw a young German guy at Playa Jardin on the beach park promenade next to the bistro for hungry beach combers.

He was sitting on a bench drawing and painting water color landscapes of his surroundings.

Imagine to have a beach workshop in the middle of the European winter...

Hence, this painter looked so happy.

2o works by him were lined
up by the wall on the ground.

They were only of DINA4 size, which made them fit into cheap protecting see through plastic covers.

He sold each aquarel (water color painting) for €10 which is a give away.

They were not prints, by the way.

Please, mind, that he might only be one of Tenerife attractions for art shopping in winter. Summers in his native northern Europe serve him for selling his art work just as well.

Sand art to buy in Tenerife?

Then there's this other German Tenerife beach lover who makes astounding sculptures of black beach sand. His hat on the floor begs for a donation.

Perhaps, he'd come to your holiday home in Tenerife. He might do a sculpture for you out of other material on your property. Just ask...

I saw framed souvenir pictures with sand art at La Orotava's tourist shop opposite the famous Casa de los Balcones, some time ago.

In April 2008 a beach artist was confronted by one of patrolling policemen of the Guardia Civil(not traffic police) on beach Playa Jardin.

He said that a license was needed to sell there. He told the lady artist if he would find her again on this spot offering her works she would be fined €90. She pointed out to him, how happy passing tourists were when they saw her displays. He said that he also enjoyed her art works as attractions for the beach but, that the law was the law.

She is expected to be back on Playa Jardin anyway disregarding the license threat because, she is seeing herself as one of Tenerife attractions for art shopping.

There are cafés, too, which offer exhibits in Tenerife. One such art café was in la Paz/'PuertoCruz'. It was too big, the rent too high. It closed.

Artists which are Tenerife attractions themselves mingle at Café Bar Teatro.

Even doctors have been part of Tenerife attractions for art shopping for quite a while. My friend Doris Chiandusi had named a few, before she died. I forgot their names. Doris was a graphic artist in Tenerife.

One of the Italian painters in Tenerife, I once met, is exhibiting modern art permanently in a big Santa Cruz museum.

I remember him as the tall handsome Italian Alberto Lombardo. This cubist painter who speaks Spanish well also knows some English and German. His own homepages don't seem to be live anymore. Admire Alberto Lombardo's art works at interarteonline.com/A_Lombardo.htm... a web not safe to connect to for GDPR or similar issues.  Try catch Alberto at his mobile Tel: 0034 + 606 850 485...

Book theme holidays on his finca (rural villa), where he teaches young and old.
He sells his art there as well.

All who do artwork or paintings in Tenerife will confirm that their art prices are much lower than in world cities which are known for the culture of art and which have a bigger market.

A good oil painting that will fetch €1000 overseas can be bought in Tenerife for about €600 to €800. So much to Tenerife attractions caused by art...

The shop at Calzada de Cabras by the Piramides mall for affordable art has disappeared, unfortunately.

However, Tenerife Spain is still interesting for real art insiders, for art collectors or, for art investors.

Sorry, I have never heard of any art auction houses in Spain Tenerife.

Although flea Market de Nuestra Señora de África in Santa Cruz Tenerife is definitely one of Tenerife attractions for its sheer size alone, flea markets are not the best source for art shopping.

You might be lucky with a framed old painting, though. You never know what you may find.

But, you must be real early for that. Best before 9 am in Santa Cruz, Avda. José Manuel Guimera. Sundays open only... It closes by 2p.m. A reasonably good piece of art would disappear on the double. Try the Rastro Puerto de la Cruz, instead a better flea market in my mind.

No contemporary good art producer will sell on flee markets. Shoppers there normally negotiate prices too much.

As a last note, it remains to say that mostly paintings and drawings are offered in Tenerife art shops. Other artwork, such as sculptures are sold by the artists directly.

Art exhibition and sales of paintings by the Swallows group.

This organization of painters of all sorts displays its works at a one week February venture by the seaside in the Swedish church of Los Cristianos. Find more information as well as opening hours under the topic Events of Tenerife.

To support Tenerife attractions for art shopping which you might want to produce yourself the following shops are a must know: 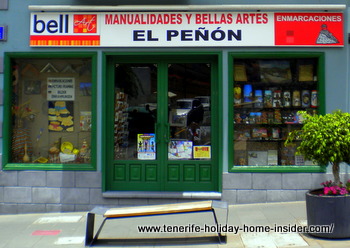 The best Tenerife handyman shop Le Roy Merlin Megashop La Orotava, which is opposite La Villa Alcampo sells you frames and/or frames for you at reasonable prices.

Tenerife exhibition center and workshop where art may be purchased.

Orotava holiday to honor the Eucharist an artistic platform to trace fine art painters of the best.

Not everything is part of Tenerife attractions art shopping. Much Tenerife art is only to be admired for free and is not for sale. It is temporary art, such as found by stone people art, sand art, Mueca art festival, Tenerife Carnival art and more.

Artists of La Mueca 2014 may be encountered here.

Christmas parties at Orotava mall with art shopping of paintings.

Encounter unusual Spain Art which stands in the open in streets and by Plaza de Espana of Tenerife's capital...

Want any type of sculpture?

Contact me if you want a Neo baroque or a modern sculpture... I know a very talented artist to do it who is also a painter.

Need a place for art printing and lithography of the very best?

There you may also get in touch with some of top art that's sold in Tenerife.

Contact the Tenerife holiday home insider. There is hardly any insider informtion she doesn't have. This is very exclusive, as I can only provide more help after consulting with the source.

Please, note that I am sorry, not to grant copy rights for this page as Anand Rubai, the artist, might not like to see her displayed art examples copied.

To Top of Page?