Christmas celebrations were worth it at Alcampo Tenerife North.

Reading about Christmas celebrations at Alcampo La Villa in April 2011, when this article was written may seem absurd.

However, there is reason in this madness.

Indeed, the party mood at Alcampo by Puerto Cruz continued on a smaller scale into the rest of the year, without the Christmas decor.

The managers of this Tenerife mall had several surprises up their sleeves. However, funky reality shows were not new but, were perceived as such, as you may see here. 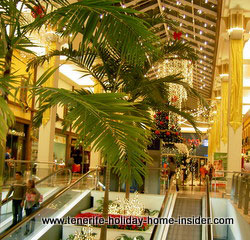 Indeed, a festivity highlight happened on January 2nd of 2011, four days before the Spanish Thanksgiving.

As per custom, Spanish children get their Christmas gifts on that day called Reyes Magos.

Then, half of the inhabitants of Puerto Cruz, Los Realejos and even and other nearby towns must have filled La Villa's shops and allies to the brim. The mall's generous and magic inside Christmas decorations set its Alcampo visitors into the best shopping frenzy. Note that the management of this shopping center felt particularly happy on that memorable holiday of the New Year of the Christmas season. In fact, the year 2010 had given it over 8 million visitors. 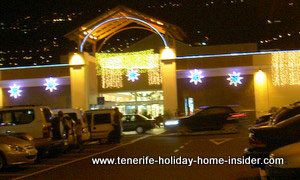 That's a record for Tenerife Recession. This business success, established this commercial center of Alcampo as one of the biggest in Spain and the Canary Islands and certainly the most important of North Tenerife.

What more reason may have been for La Villa for celebrating with the public
on Christmas?

Also notice that the almost 350m facade of La Villa Alcampo which you could see from the freeway was bathed in Christmas led lights.

Upstairs, its usual free open air parking greeted the mall's guests with more visible festive gear. Yet, Christmas celebrations hailed the birth of Christ most prominently by one of its main entrances. 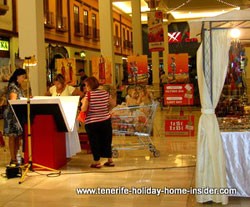 Tenerife landscape paintings on sale were one of this New Year's day highlights.

A lady helped selecting shoppers the right Christmas gift, which they wanted.

The crafts had found a prominent place together with a festive jewelry stall.

Everything was opposite a tall decorated Christmas tree which was surrounded by other festive gear. Please notice that Alcampo La Villa belongs officially to a town which celebrates Christ's birth in most beautiful manner. See photos of Christmas of it which prove it. 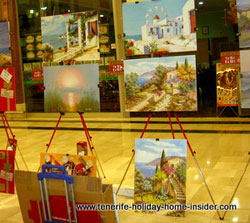 The shopping promotion for art is one of new marketing ideas. Alcampo encourages everybody with a business which may profit by exposure and more public relations to come forward at any time of the year.

Oil paintings as well as Aquarels were pegged up with ribbons to celebrate the nativity season on walls.

Meantime, the biggest hypermarket of Tenerife North at la Villa honored the season in its own way. It had sales of reduced computers, notebooks, televisions, cellular telephones and many other electric gadgets.

Spanish food and drink which hails Christmas on shelves

Sweets, nuts and chocolates from all corners of Europe were tempting you with festive glitter of Christmas celebrations. Traditional cookies and Christmas cakes from Scandinavia, Germany, Italy and other countries as well as English black pudding were there. The Spanish 'Tarrón' sweets made with almonds and so hard on the teeth were offered in all sorts of flavors.

Enormous, Spanish 'Cerrano hams' were crowning the festive occasion, while their trophy the 'Pata Negra' was not amiss. You almost smelled everything from far. You could purchase them with the appropriate cutting equipment. Such gadget is lovely to have in a holiday home in Tenerife at all times, by the way.

Every year, cheerful Alcampo staff with Father Christmas caps does its utmost to render excellent Christmas service. So do little workshops. They design a new festive hair style for you, do party nails, facials, piercings and tattoos, you name it. Photo studios capture your picture for a Christmas gift.

12 movie halls are waiting to be explored for Christmas productions on large cinema screens.

Restaurants, bars and cafés prepare yummy party dishes and serve best coffee to you. Even a Mc Donald is all set for Hamburger Christmas celebrations.

Also learn about amazing  nightlife  which is part of a Tenerife Carnival event at Alcampo Laguna and much more...

From Christmas celebrations back to Alcampo