Tenerife Wildlife - Is it all in the wild?

Although Tenerife is only roughly 100 miles from Africa, it has hardly any wild creatures.

At least, not on land. The ocean is different.

What about all those countless interesting lizards? 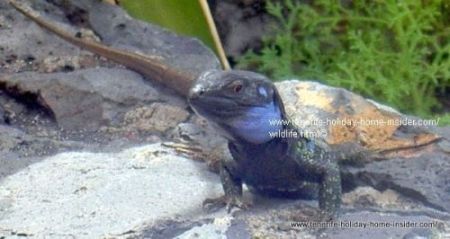 My favorite is a Gallotia Galloti Eisentrauti a Tenerife wall lizard which I encountered in 2014 at San Pedro Los Realejos. It was a fully grown almost 16 inches long male with the most stunning blue throat. Those wall lizards are also part of the oldest species of wild creatures of Tenerife. They have evolved on the biggest of all Canary Islands, since they have made it to shore, 20 million years ago. 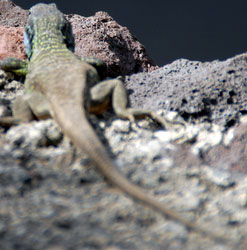 Look at a slightly younger species of this Tenerife lizard of the West Coast.  The bellies of males are blueish and females are rather of a mauve brown.<p>
The picture of this one was taken by the Rambla del Castro of Realejos. It is the type,  which a friend and I have fed with  overripe bananas in  Parque Taoro in the middle of its residential area.

The wildlife of the lizards is not an easy one. Wild stray cats are a great threat.

The Galotia lizard of Tenerife is also prominent in the far north in the Anaga mountains and in its nearby Mercedes forests.

On February 26, 2013, I saw this blue and black male lizard by the protected spaces of Playa Jardin's endemic cactus park. It was 1,5 inches wide by about 6-7 inches long (4,5 cm x 20 cm).
This is rather huge for Tenerife North lizard standards.
The amazing noise which it made in dry undergrowth drew my attention.

Or what lizards eat besides fruit

Such a North lizard once found its way onto my neighbors' balcony. This creature, which had lost its tail became tame and ate flies out of my neighbor's hand. Just figure that he hunted for flies for it every morning. 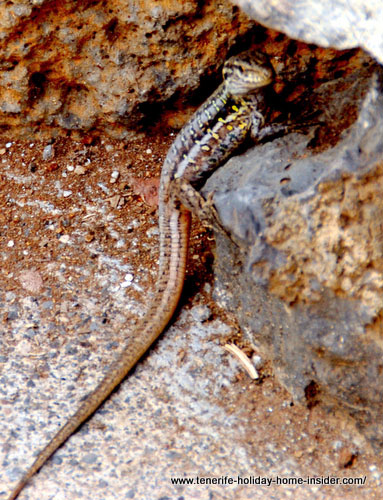 The neighbor remembers that the little lizard teeth were rather sharp, while it looked at him like a mini crocodile. Once, it almost bit him.

It may have been a cat which had attacked this lizard. Rats are usually not that dangerous for it. They are not fast enough.

Admire this beautifully freckled lizard of Tenerife in the photo on your right.
This one may have been 50cm (about 16 inches) long, if I remember well.

It is a male lizard called Gallotia Intermedia.

It may cross your path in the Teno mountain region or by Mount Teide or in its Cañadas.

However, we captured this one a further down from Spain's highest peak, while we had drinks in a little outside Bodega Café, which had a rock garden.

This dotted lizard may reach close to one meter in size, where the tail makes up most of it.
See how it looks at you in the picture beside,  all curious... Its yellow dots seem to glow, while blue also adorns its reptile coat.

All Tenerife lizards are wall lizards. I call them rock lizards. You discover them, wherever you walk outdoors near stones and even rubble. It is not easy to catch one on camera, unless it is sun bathing and half asleep.

A giant on El Hierro which is part of Tenerife province

The wildlife of Tenerife goats

There are many indigenous goats on the island. Most are brown, others are black and white.  A cute goat picture  with a most most stunning mix of goat coat colors and facial expression by a Tenerife mountain goat is a good example... Some of the mountain goats are bigger and their babies are simply cute. Without goats milk Tenerife would not have many a prize cheese. Mind, those agile animals who can go,  where you can't, often endanger delicate,  wild herbs in gorges called 'Barrancos' or in other remote spots. Are goats part of Tenerife wild animal life? Yes, so to speak.

Tenerife goats are at home in rough country by the ocean or in altitudes but are not allowed in the National Park. They are the semi wildlife which blocks your path often, when you get a little off the beaten track. They always have right of way.
They were already around,  when the neolithic Guanches reigned the island. Spaniards could learn much about how to keep goats from them, but preferred them to look after the animals. By the way, the Guanche counting system was based on goats.


Legal Hunting or culling of Mufflons 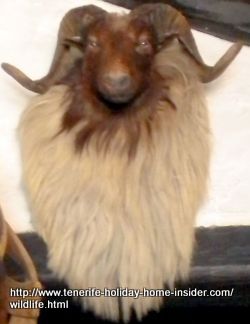 About 100 Mufflons roam wild in the Cañadas del Teide and surroundings. These goat hybrids of nearly 100 pounds have reproduced fast since they were introduced in 1970. Their only enemy is man who is allowed to shoot them on set days in spring and autumn,  only. Many a hiking path is off limits, then.

Mufflons destroy the Tenerife ecological system by feeding on indigenous plants. The following   shows what those wild animals are like.

The wildlife hunting law and licenses

A must for your own benefit are the government law and conditions to hunt small or bigger animals in Tenerife, such as the Mufflon which

The wild Tenerife bee and the honey bee 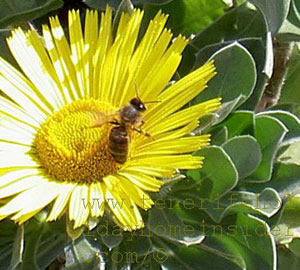 It's hard to distinguish between Tenerife honey bees or just flower bees. Mind that the honey bee by Teide delivers one of finest mountain honeys. Close to 500 bee keepers sell this bee  nectar in all kinds of forms to the shops of the Canary Islands.
African bees are said to have invaded Tenerife at some rare points but are not really known for creating a nuisance by taking over the indigenous Tenerife bee population.
By the way, Tenerife wasps are not much bigger than this bee. Also, they don't seem to be aggressive. 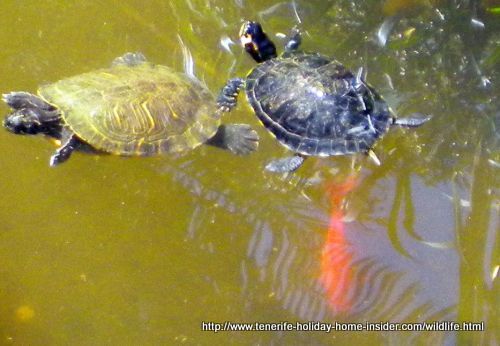 Aquatic turtles are not fit to be released into the wild when they were not born there.
Endangered Hammerhead marine turtles (Tortugas Boba) which roam almost all ocean sand often perish in fishing nets or by eating plastic, as confirmed again by the CRFS Canary Rescue organization in El Medano in 2013
Some of Tenerife turtles, such as from from Punta de Teno were successfully relocated to the small bay of El Puertito o Caleta by Adeje
Edible fish like Doradas, Bonitas, Viejas, Trouper, Tuna, Sardines, eels, octopus, blue Marlin, Sting Rays
Any fish and fauna which love volcanic rocks and flora in temperate Altantic waters
Mind more seafood and edible fish listed for eating at Tambo Tenerife with partly English translations such as for Rodavallo, Lubina, Chicharros, Sama, Sargo, Lenguado for this fresh fish Restaurant of Punta Brava.

Yes, they exist and are mainly abandoned Podenco hunting dogs which is a disgrace. Any wild dogs can become a nuisance when they get rabid and roam as far out as in Teide national park. By the way, it's not permitted to feed them by Spanish law. 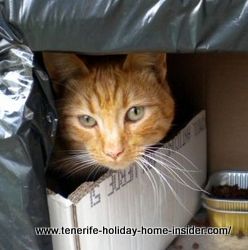 Felix the wild tomcat from Calle Jasmin is depicted with his third makeshift street home that somebody made for him.
Some nasty person kept on demolishing it.

Felix only eats canine food. He stalked all dogs before he was neutered for free by the local vet.

A little late, as it was  impossible to catch him without a fishing net on a pole. He tried to play-fight with all canines but above all with small dogs,  male or female alike.

Marvel at him below, as he tries to kiss ourembarrassed dog Jessy. 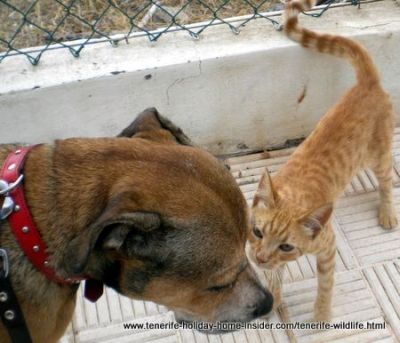 She normally ignored him but,  one day it was her who gently touched his nose with her snout. However, playing with the cat would have taken matters too far for the old canine.

Felix fully recovered from his free neutering. Now he is as playful and friendly as before and he is only a threat to rats.  He stayed wild but even seems to share his food with another stray cat, off lately.

The just mentioned operation of Felix the cat was done by the German, English and Spanish speaking Tenerife vet of Clinica Veterinaria Toscal at C/Monturrio 21 in Longuera Longuera of Realejos who will also be there for your wild, i.e. "tamed" birds, snakes and other pets.

Other charitable German vets and cats

At some stage, the owner of Loro Park encouraged German vets to help to reduce the Tenerife wildlife of stray cats, since they had become too many. Now it's almost a custom for doctors to return from time to time to take care of new abandoned felines. 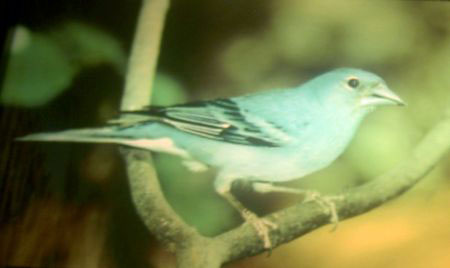