Why mountain goats love it semi wild for roaming. 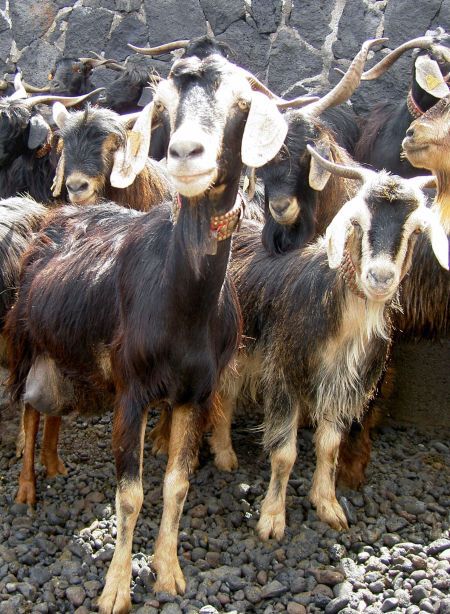 They are used to climb almost any height. Difficult terrain is found on high mountain slopes. If you like that and get on with it, you are a creature of the wilderness, just like goats who will always
survive without their herdsmen. You too, will adapt to it with survival expertise and instincts, when your total freedom is given back to you.

Meantime the rock goats or Canary Islands goats which were part of the Tenerife aboriginal culture are quite spoiled. Tenerife is so green, above all in the north. There is much fresh, free goat food of immense variety for goats. Better than buying goat fodder...

Keeping goats by the almost 4000 m high (more than 12000 foot) Teide National park is not allowed nowadays. The Cañadas are part of world heritage sites now. However, the animals who love mountains may get close, if they were turned wild. They wouldn't climb it all, though. Why? There is nothing to eat or drink for them on top of Teide.

Beside, admire the freedom of the mountain climbers of the Canary Island goats on an elevated valley near Hotel Martim Tenerife. The meadows with their indigenous green broad leaved ground cover and the warm sun were inviting. A few of the goats with young ones were resting in it. Two dogs were watching them from far. No shepherd was in sight. May be, no herdsman was needed then, as they couldn't get out of the huge fenced in terrain.

However on principal, Canary Island goats in Tenerife are not regarded as wildlife, although they are the only animals that could adapt to wild conditions any time.

Mind two very big black goats standing on the ruins of an elevated wall, as if they had chosen them to supervise the rest of the herd. By the way, did you ever notice how goats love to position themselves in single lines on extremely narrow elevations all over the world. Perhaps, such animals are the leaders, indeed. But then this... More smaller goats stand on a lower wall. It all looks rather peculiar.

The Tenerife goats breed is likely to also originate from the Bezoar goat of Asia, Middle East, Arabia and Northern Africa. In Tenerife however, they live in a paradise just like the island's humans. Also the mountain goats of the Tenerife semi wilderness are spoiled with free succulent ground covers. Many green meadows abound, such as depicted beside. The scene was captured on camera in the vicinity el Burgado of the 4 star Maritim Hotel by Puerto de la Cruz.

Why animal bathing of goats is explained by an entire festival

Is this the Puerto Cruz fiesta of the mountain goats ?

Click to find out all about the animal bathing of goats.

Cats and dogs are endangered animals when they are abandoned in Tenerife and escape into the wild. There they can easily become rabid, when bitten by infected wild animals.

Go to endangered animals of Tenerife to discover what danger Canary Island goats are facing, above all, when they are not totally in the wild.

From mountain goats back to goat keeping to see a typical picture of a Canary Island goat. Also discover a peculiar scene where such an animal is kept in a somewhat different manner.