Endangered animals on Terife only seem to be few.

There are some endangered animals of Tenerife, although not so many on land.

Would you believe that goats have become endangered?

Too much building of all kinds of constructions and more and more roads cannot be healthy for men and beast on a tiny island.

We can do a little to protect our livestock from nature. Why?

Sudden heavy rains may carry down volcanic rocks into Tenerife gorges. That may endanger goats. Two perished in the San Felipe gorge because of flooding rains in 2009.  The animals were dumped in wheel barrows on Playa Jardin after their tragic death. Not a pleasant sight at all... Therefore, Barranco gorges may not always be the ideal place for goat keeping, although they are loved by goats.

Yet, they make Canary Island goats endangered animals to an extent.

More so, many Tenerife mountain goats died defenseless by exposure to wildfires in Tenerife and on Gran Canaria, in 2007. People hopefully learned, not to keep goats fenced in too close to forests which may burn. 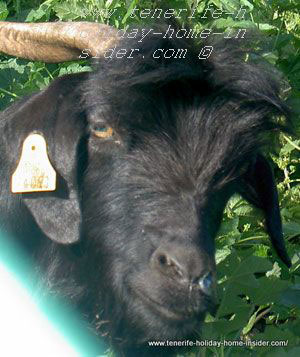 Canary Island goat in Tenerife with chip on its ear.

Notice the lovable Canary Island goat beside,  which was tagged with a goat chip on its ear.  It seldom happens that mountain goats  in Tenerife are stolen. However, they may get lost in rare cases,  when no dog watches them either. This may happen, as all goats are very curious and love adventure.

Peril for goats from other animals

No hazards from other animals of Tenerife exists, unless by a rabid dog or cat.

Reptiles like the La Gomera giant lizard as well as the El Hierro giant lizard are said to face extinction right now, while their numbers were reported as shrunk too much again in 2010.
Meantime, they are so important for a healthy ecosystem of the islands. Indigenous creatures shouldn't be compromised. They need protecting.

Recent news of 2015 reported that the legendary Gomeran lizard isn't in peril any more. A lizard sanctuary managed to breed the reptile very successfully and more may be released into the wild, gradually.

Tenerife's as well as the Gran Canary Island black pig are getting scarce. Farmers must not cross breed them.

2015 rang an alarm bell for them. In fact, there didn't seem to be any Teide bees in Spring. However, this must not be a bad sign. It was due to last winter's climatic conditions. However, African bees must be watched. They may take over local bees and are therefore a real threat.

A law against abandoned Tenerife dogs

In 2015 i encountered two abandoned Podenco hunting dogs on a popular mountain parking ground. I researched this problem. I discovered a Spanish law in this respect. Fines are very high for anybody who gives food or water to such dogs in peril. They and other stray dogs will be shot eventually.

Discover the peril with dolphin and whale watching on Tenerife  here...

I am not sure, if there was any imminent danger concerning cazones which are the small predator sharks of Tenerife and the Canary Islands. However this should be looked at more closely by Puerto de la Cruz which has many artists who are much concerned about the environment on land and on the sea.

Endangered animals of our oceans

The Bertram tournaments celebrated their fiftieth anniversary between 21 and 23rd of July 2011.

Those tournaments represent the most professional, elite form of  fishing on the biggest Canary Island, while they also assist to preserve ocean animals which may easily become extinct.

Not only the big whale is threatened to perish, but also game  fish,  when they are killed immature by men. This also includes dolphins, sea lions, orcas, turtles and many more creatures of the sea. Unfortunately, to fish for sharks  and other ocean species is not properly controlled in some countries.

A fisherman must return the game fish back to sea when they don't have a minimum weight.

All such endangered animals are tagged with micro chips during the Bertram tournament. They are then released to trace their future global migration. This is a strategy to preserve the environment for the sake of mankind. At the same time, it is very important and interesting for scientists and marine biology.

The entire ocean near the Tenerife capital Santa Cruz seemed to be in peril in 2009, when industrial waste was discovered which disappeared quite fast.  It has been reported that it was an accident and will never happen again. All red lights went on when this happened, as such bad chemicals in the sea contribute to endangered animals and are a threat to humans,  too.

This incident was like a needle in a hay stack compared to the nuclear Fukushima Daiichi disaster and threat to animals and mankind caused by damaged reactors in Japan in 2011.

Also radar and the humble plastic bag with all its related cousins as well as other chemical and some mineral byproducts loom over the well being of our ocean animals. Not to forget spills by damaged oil tankers which are the worst.

Mercury dumped in to the ocean

It sinks to the bottom and indirectly poisons all big sea animals and large fish that dwell there.