A harbour for shark fishing at a mere minute from the Puerto Cruz hub and Plaza de Charcos?

If I hadn't seen it I wouldn't believe it.

There, a few tiny sharks were lying on the cobble stones of the quay. None of the dead small shark species were moving any more.

Their color was as gray and unobtrusive like that of the stones.

You could detect the pinkish white bellies of the animals, however. Pink due to skin removed... 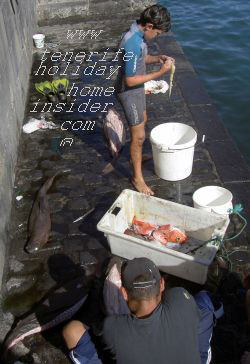 A boy who looked 9 years old was busy cleaning the miniature sharks called Cazones. They were by the utmost 30 cm or 1,5 foot big. A man next to the boy seemed to rest on the rough steps, as if he was tired from shark fishing. .

The dead sharks' typical big white eyes puzzled me. That's when my friend César told me that I was looking at the ocean's top predators.

I come from the territory of the great white, the blue and the tiger sharks. Often, I saw them at the ZA Durban sharks board. And when they are dead, you smell them from a half a mile away. There, I never heard about anybody who was fishing for sharks to sell them or eat them.

Of course, I was wondering if the harbour of Puerto de la Cruz was deep enough for sharks.

This ancient harbor basin which plays an interesting role in Tenerife Puerto Cruz history, is well protected by high quays and walls. This seclusion might cause warmer water than in other locations around the town. So what about the global warming which could slowly create new ocean habitats? 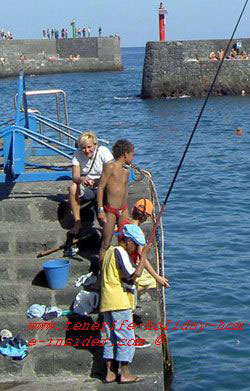 Discover a young family on obvious fishing vacations, depicted beside. The teenage chaps with their professional fishing rods appeared to be rather serious for a holiday. People whom I know are more gay during their fishing vacations. Their mother told me how much fun they are having.

The very young boys by the Puerto quay were behind the boy with his sharks. A blond woman was watching them. All three guys were concentrating and I was wondering what fish bait was on their hooks.

However, this could be an interesting harbour scene for Tenerife family fun activities.

More about shark catching in Tenerife

Also around Christmas, I read a report about sharks in a German newspaper. It was about fishermen of Puerto de la Cruz of Tenerife. The paper accused the fishermen of having shown little regard for the environment by the way of treating the predators. In fact, Puerto Cruz, the oldest Tenerife resort prides itself of caring for the environment, rather.

Anyway, the fishermen said that they caught the big fish, as they called it, in the harbor or nearby. Local sports fishermen didn't want to believe it. There were many arguments, such as that a crane had been used to get the sharp teeth monster out of the Atlantic's depth, which wouldn't have been right.

Another story goes around in Spanish about shark fishing end of September 23, 2010, when a large, heavy sandshark Odontaspis Ferox had been caught near el Puerto. It was dissected by the port. Finally, it was returned to the ocean. Sand sharks, like the particular shark species, which was captured, may grow more than 3,5m long. They also may weigh more than 200kg.

The old port and fishing town of la Orotava

From shark fishing back to Tenerife fishing with more related links and pictures.