How do you feel about Cazones which belong to smaller shark species ?

Small, typical Tenerife sharks called Cazones are all around the Canary Islands. Their name translates to big hunters or perhaps top hunters.

By the way, this sharks scientific name is Galeorhimus Vitamimcus and it has a length of 15 cm to 1,80m.

The enemies of the Cazon?

Definitely, above all fishermen...

The Cookie cutter sharks would attack the Cazones. However, those nasty predators are not living near their habitat, to the best of my knowledge. 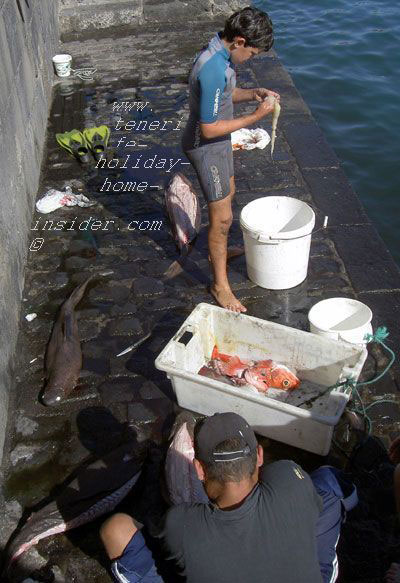 Cazones being gutted by a fisherman by the Puerto de la Cruz pier.

Would you think that the big hunters, as the Spaniards call them in Tenerife, are as much on top of the food chain like their cousins the super sharks? By the way, there is no known incident of a shark attack by the big hunters as well as the top hunters by Tenerife beaches or to divers.

In fact, my daughter was swimming or rather diving with real sharks, not Cazones, and was not harmed. This happened near the Mozambique channel while she was deep sea diving.
She wrote this to me in an email at the time. One of the reasons for her telling me this was that the diving teacher should never have let her and a companion dive deep in those Indian Ocean waters on their own, as they had no adequate diving certificates yet. Nevertheless, shark attacks are known to have happened to surfers. Dark diving rubber suites also don't seem to attract sharks, unless riding waves in the Indian Ocean. Therefore, no incidents of unobtrusive divers harmed by sharks are known.

See a photo of one of so called big or main hunters named after a caught cazon shark. The animal is held by two young fishermen, which gives a good idea about its size. The shark looks like much less than 2m or 6 foot long. These predators are small sharks and are typical for shark fishing Tenerife and Canary Islands.

How do Cazones sharks get to Tenerife coastal areas?

In my mind, this will be possible when a shark enters a warmer current for some reason. Indeed, photos of single shark especies, such as of a caught sand shark were published by Tenerife newspapers. This medium sized, bulky sand shark is called Tiburon Toro in Tenerife (bull shark or Odontaspis Ferox) Also a white shark which is much bigger than the relatively tiny predator sharks was washed dead onto the shore by Las Caletas Tenerife South. Some onlooker wanted to rip out one of its sharp teeth as a souvenir, so they say.

Christmas time in January seems to be a very good time to sight sharks in Tenerife and by all Canary Islands. That's when some catch small Cazon sharks, although fishing experts or seefood gourmets say that they don't taste good at all. Perhaps, much curry and mojo picante (chilly sauce) may disguise the taste. I haven't seen shark fins on Tenerife fish restaurants' menues, but in Bodegas and in Guachinches. There, they call the disguised shark meat Tollos.

A German web displayed a video where the big shark shown in it was allegedly filmed in Tenerife waters.
Some few volcanic rocks are little proof of it. There are other world oceans with volcanic rocks, you know.

I will ask some divers, whom I trust, if they saw real very big shark in Tenerife waters and will let you know...

I spotted a video where a woman dissected a tiny caught shark, which may have been one of Cazones, in the harbour of Puerto Cruz Tenerife. There, baby sharks and shark eggs were removed from its belly. She gave them back to the harbour, where they may have fallen prey to bigger fish. This now is not right in my mind, at all. I've also taken photos of slightly bigger dead sharks Cazones in exactly the same spot.

Discover more pictures of Cazones, which were the result of fishing for sharks on the biggest Canary Island.

Otherwise, it's well possible that the small cazon sharks are not endangered species, unless they are not part of concern for the environment by Puerto Cruz in Tenerife.

Do you feel that they should be on the list for protected animals?

Return from Cazones to wildlife of Tenerife Canary Islands Spain.

Here are some musings about  vacations for fishing in  the Canary Islands.  Indeed, such holidays are not only popular by Puerto de la Cruz, but also in South Tenerife. I haven't seen fly or shark fishing in Puerto de la Cruz on such grand escale, except during Christmas time. Certainly, the currents and the right ocean winds are best then for this region.