The night of Tenerife Christmas on January 05 of 2018 by the ancient historical fort Castillo San Felipe was a memorable one. 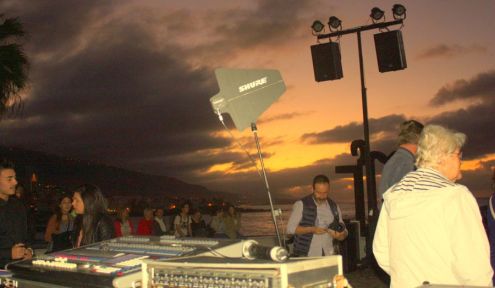 Tenerife Christmas Jan 05 of 2018 with professional TV sound and lighting equipment at sundown by the Atlantic shore where many waited for Los Reyes Magos to show up.

This fort that was built to fend off pirates at Puerto de la Cruz by the seaside at Playa Jardin is an awesome stage at twilight. The setting of the sun at the time when i arrived wasn't picture perfect but spectacular nevertheless. I was one and a half hours early for the 7.30 p.m. arrival of real people that represented the biblical Magi. Behind me was a French speaking family. In front of me, a man talked in Portuguese to his wife whose baby grew restless. 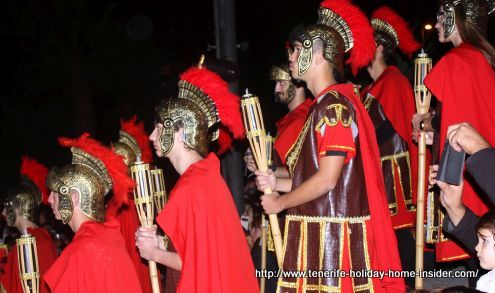 Roman soldiers portrayed by silent actors faced the big cannon of the fort waiting for the Magi the holy kings to show up.

They stood a few paces from me. They played the part by looking sternly ahead. Suddenly, the portal of the Castillo opened. 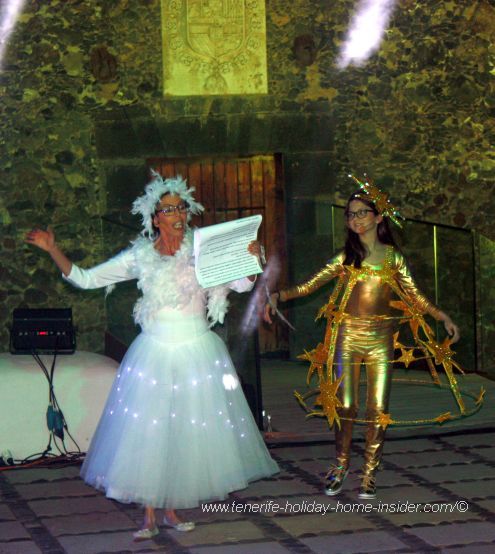 A storyteller with the Star of Bethlehem reads the gospel how the star was guiding the holy kings to see the newborn King Jesus.

Shortly after that,  all three kings appeared on the rooftop of the castle by the sound of fireworks. 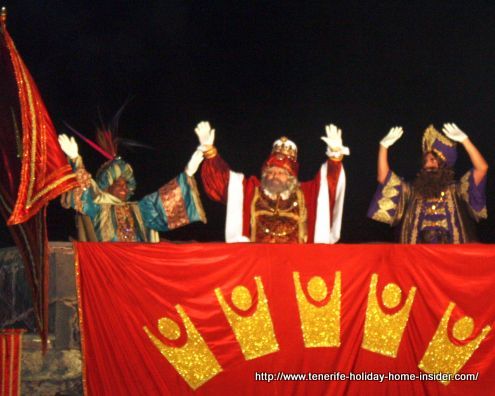 We don't know how they had come. They arrive with a helicopter in the Tenerife capital, by camels in San Christóbal de la Laguna and by ancient ships in Los Christianos. Indeed, their coming and going varies by Tenerife Christmas traditions. But they always come to worship baby Jesus with precious gifts of gold, Frankinsence and Myrrh. 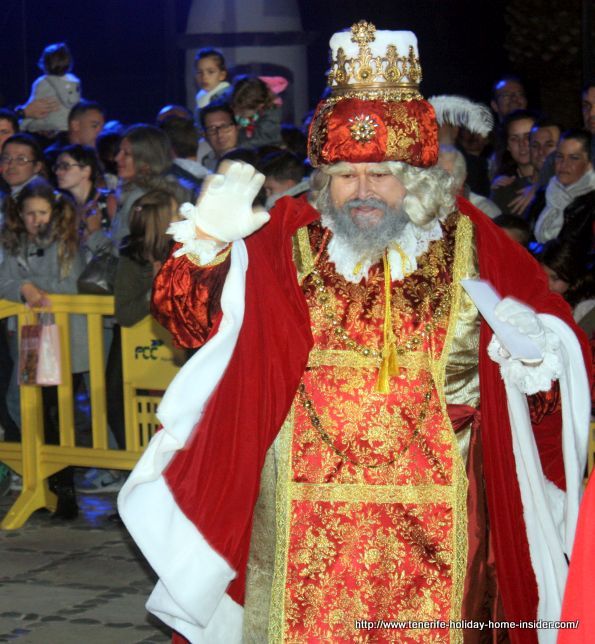 Melchior eldest of Reyes Magos and King of Persia of the time of Jesus shows up in Puerto de la Cruz. 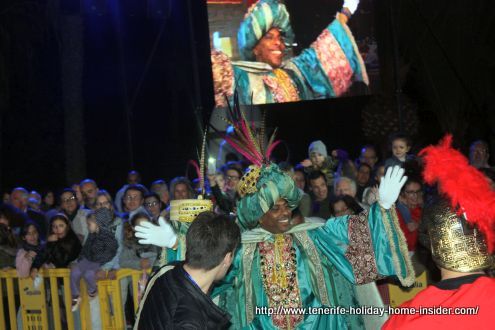 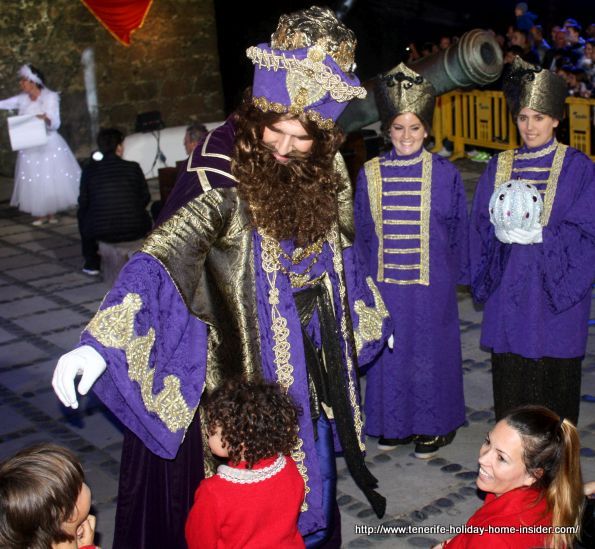 Caspar with his black beard is talking to little children in Puerto de la Cruz by the Fort of San Felipe. 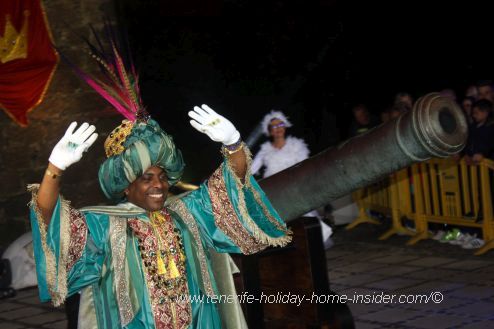 Balthasar the African of the three wise men the biblical Magi on January 05 of 2018 in Puerto de la Cruz by the Castillo San Felipe cannon.
Christmas on the biggest Canary Island isn't only reminded and anticipated by the holy kings on house facades during the Advent. There, these three wise men are in thousands of nativity displays. Many of them are portrayed life as "Belenes Vivos" by real people in street performances like in Icod el Alto, in Tigaiga and inside schools. 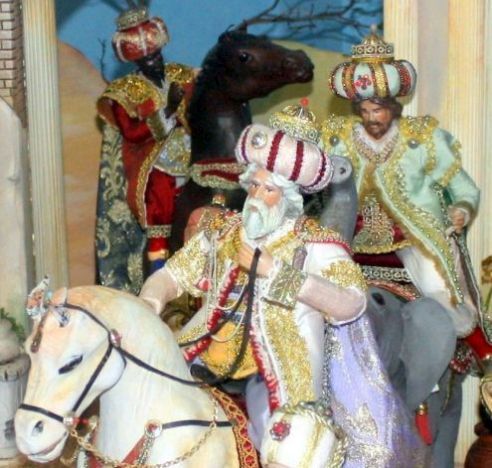 The three holy kings the icon of Tenerife Christmas figure in homes, malls, shops and window displays, in churches, in the Media like TV and in the Internet. Sometimes, they make their appearance long before the Cabalgata parade to collect letters with Christmas gift wishes from the very young ones. All they have in common with Father Christmas is that only good children are rewarded by them. And that's to be taken with a pinch of salt, you know...

The Cabalgata floats and about 350 parade participants 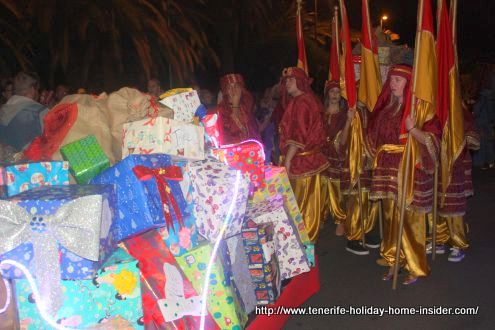 Waiting for the parade to start as well as for the kings from the East. 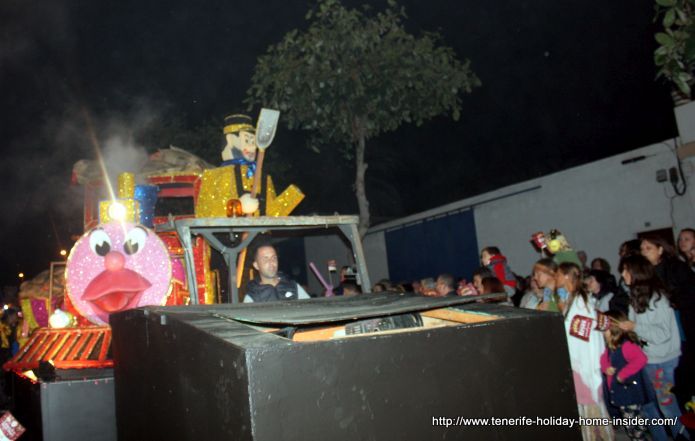 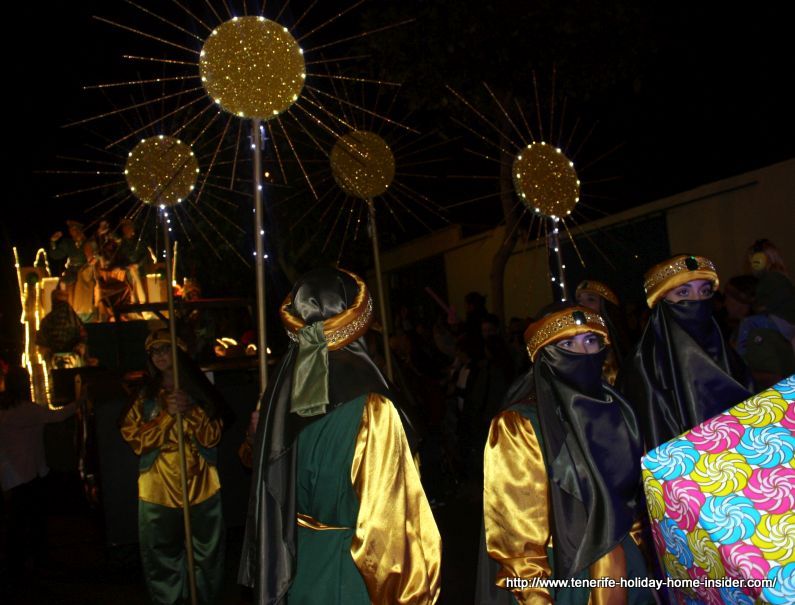 Caravan followers of one of Los Reyes Magos in Puerto de la Cruz. 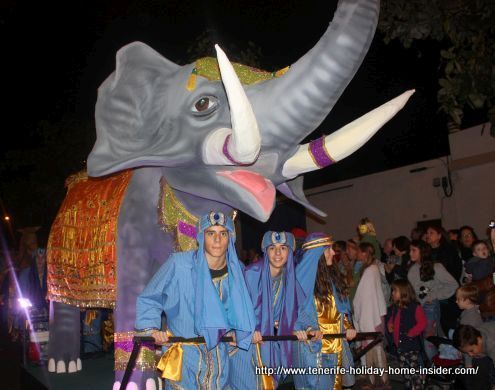 Some helpers would carry precious gifts for Jesus.  This was the way to worship kings in the days of Herod the builder. 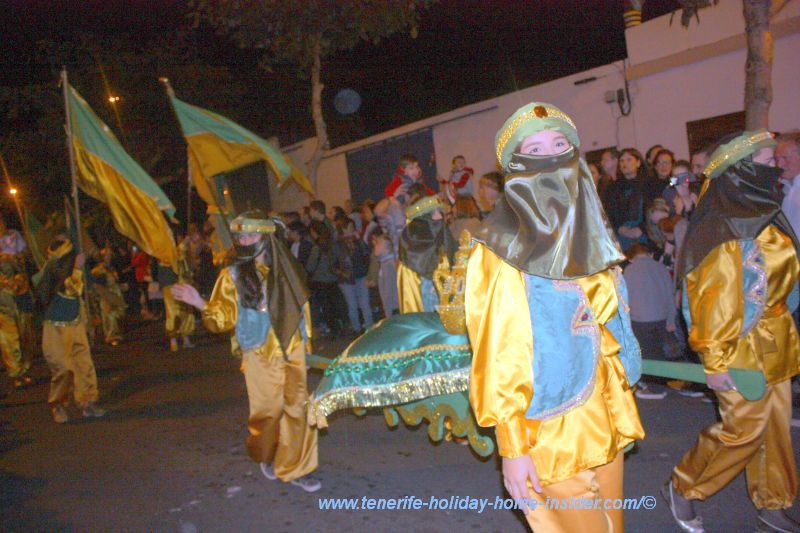 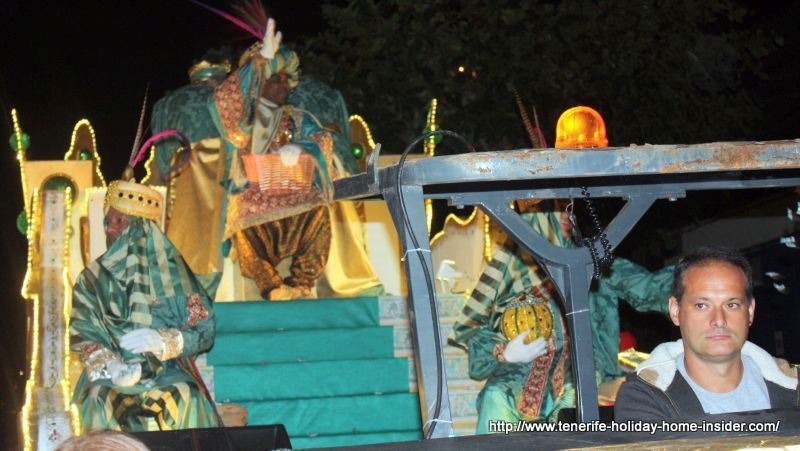 Civil servant driving a Rey of the 3 biblical Magi. 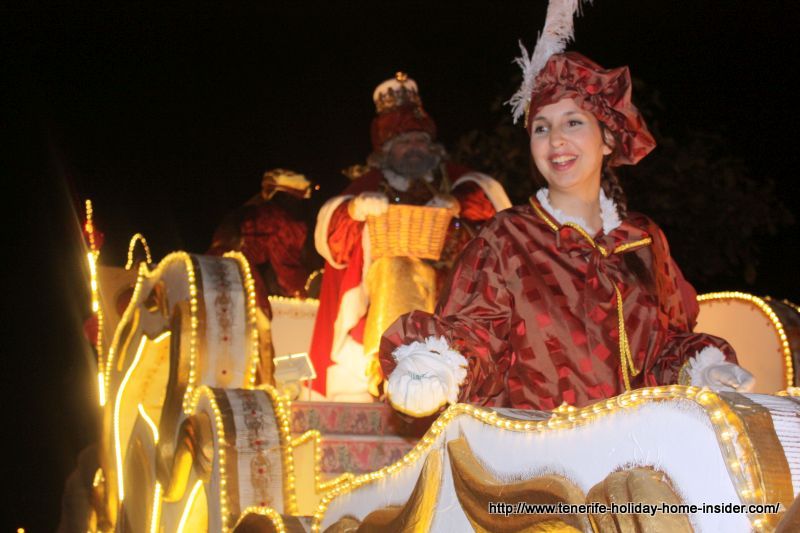 This takes place by 10 p.m. on Plaza de Europa when the mayor is handing over the keys to his town. Now the three holy kings can enter all homes of children to deposit their gifts which is usually by a Christmas tree.
Before that however, the Cabalgata stops by the church Iglesia de la Piñata. 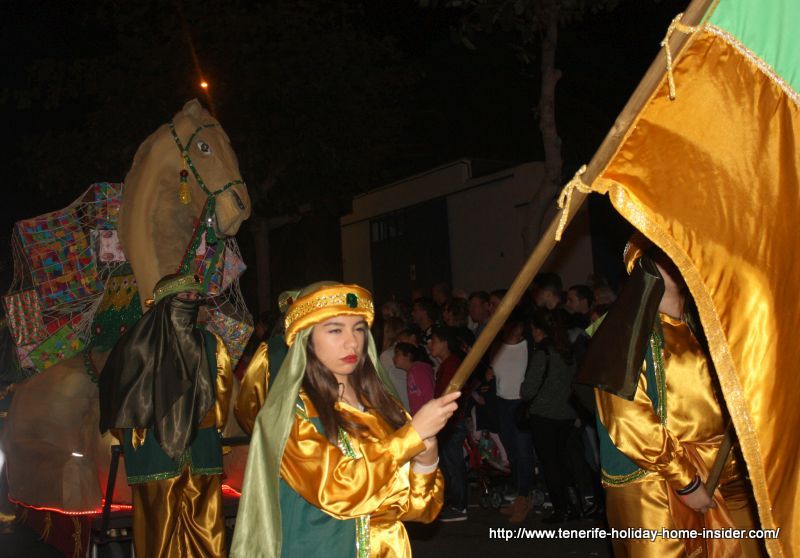 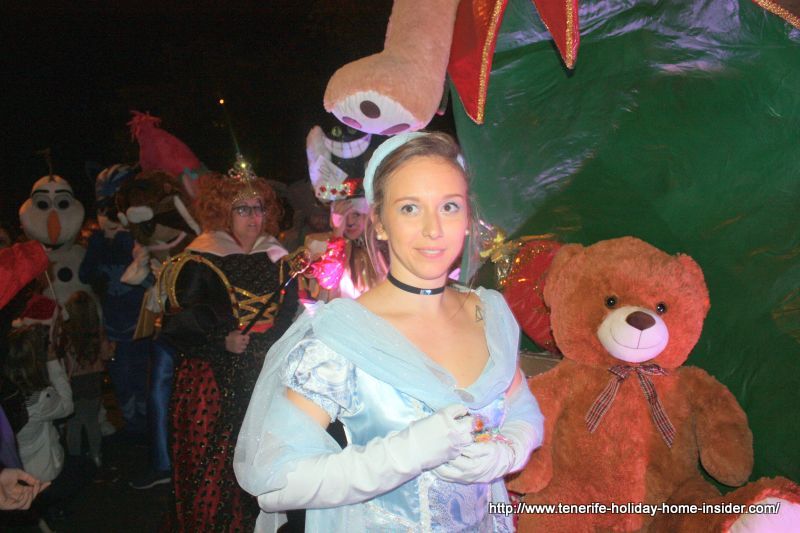 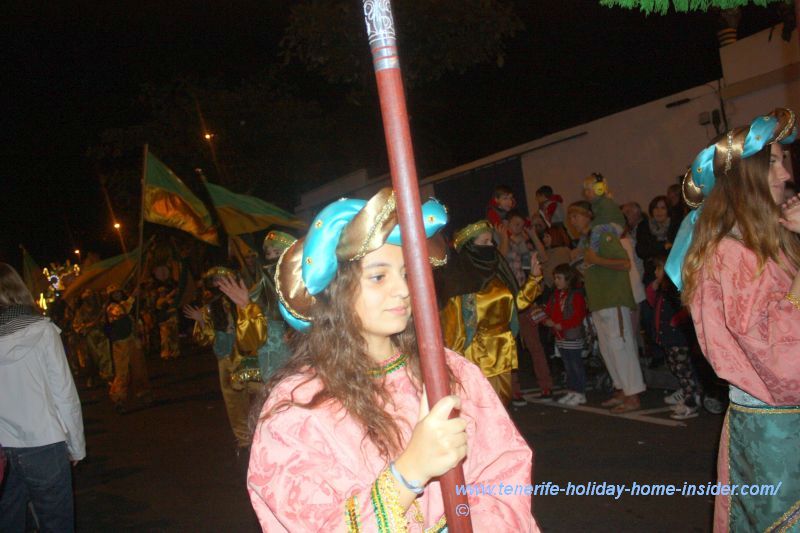 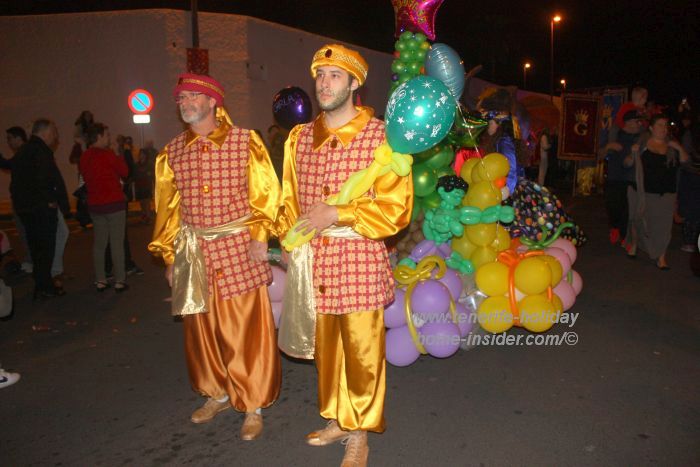 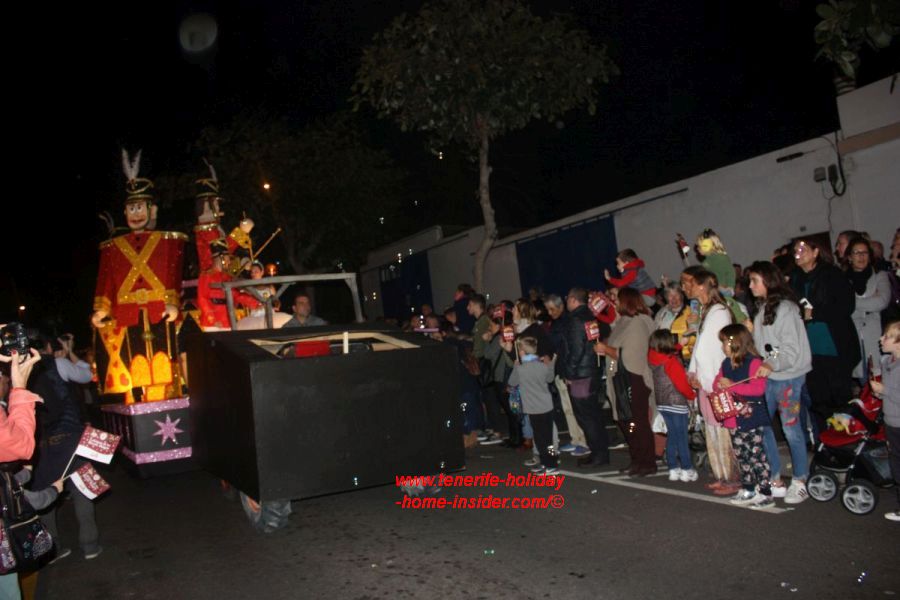 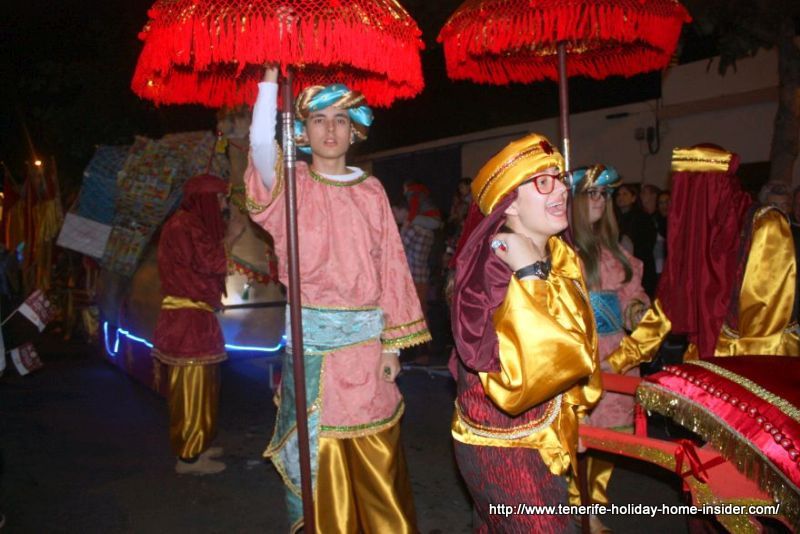 There, gift parcels are taken down from floats and are given to handicapped children. A Christmas spirit highlight, indeed...

Later, the kids of poor families receive presents from the holy kings on Plaza de Europa.

What about Tenerife Christmas for kids in hospitals?

Young patients who are often terminally ill are visited by Los Reyes Magos who bring Christmas gifts to them. 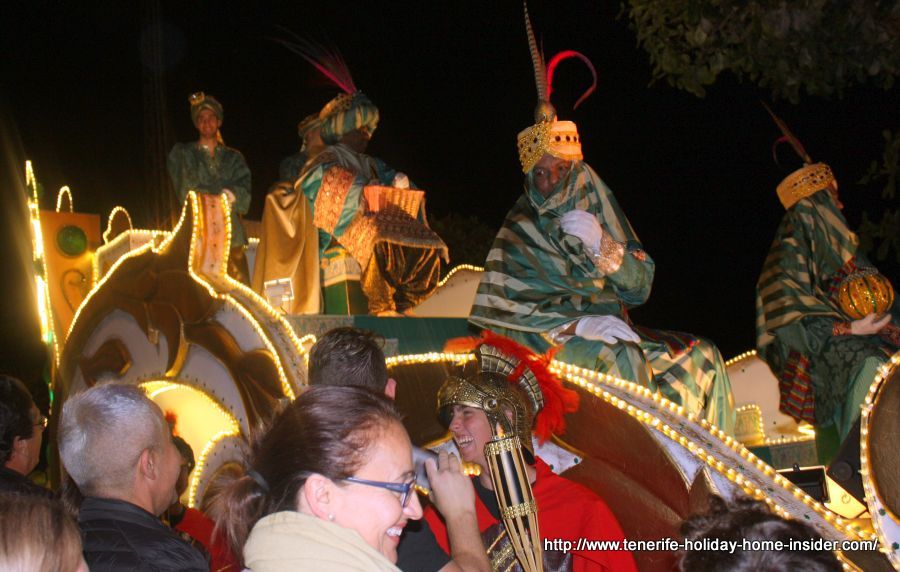 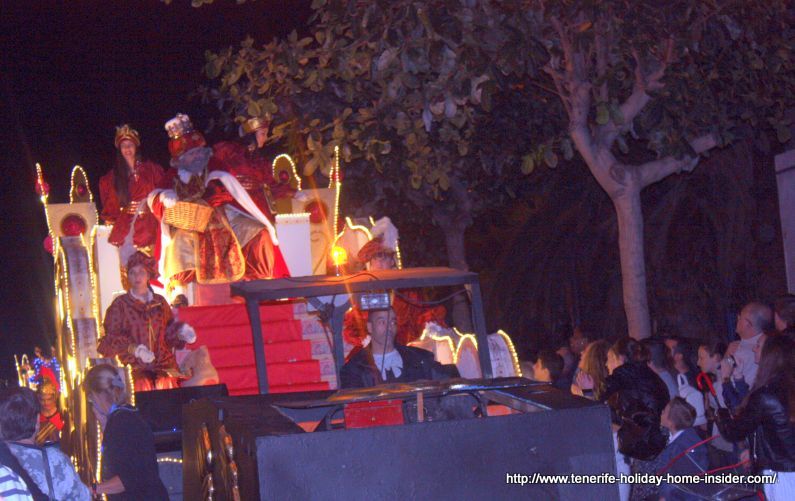 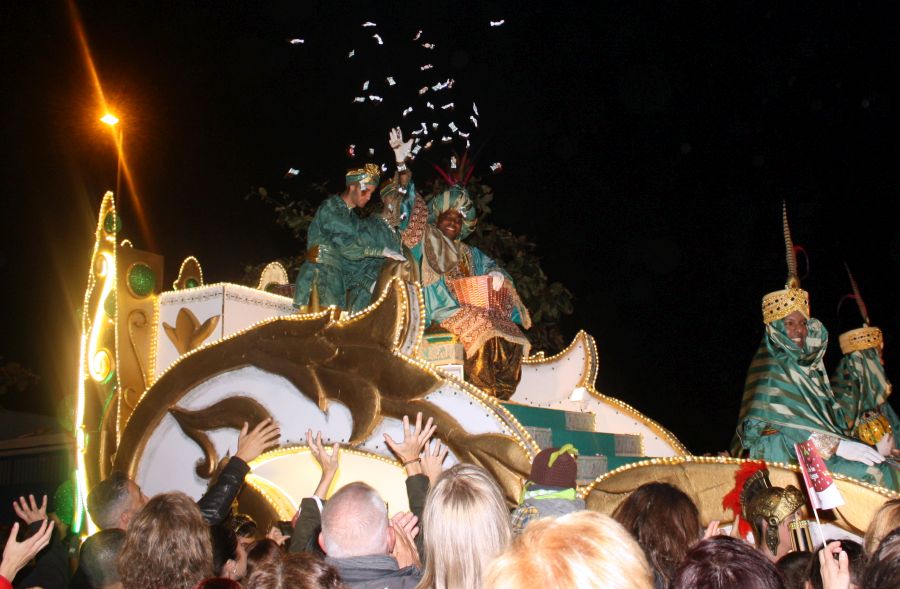 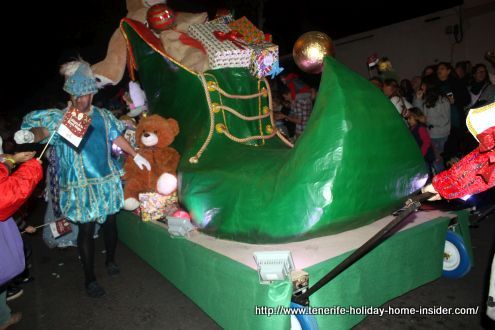 The Dia de Reyes January 06 of Theophany as well as the night before with the Cabalgata of los Reyes Magos will never be replaced by Father Christmas. The German tradition of celebrating December 24 wont have a chance either to take over in Spanish speaking countries. The magic of the three Magi is to go on.

Not to forget a float for the Gospel of the day 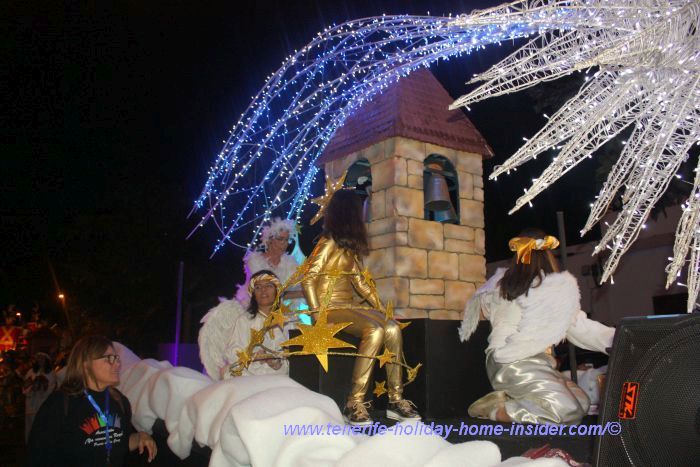 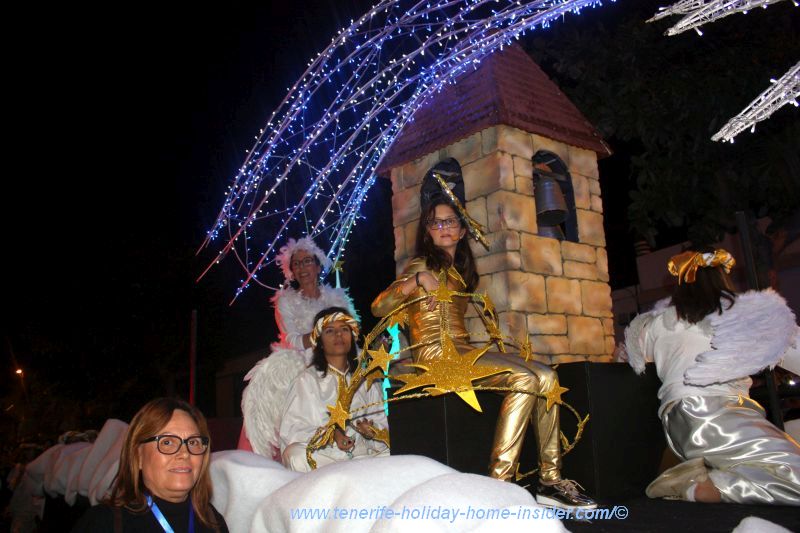 Any special Tenerife Christmas food like the Turky at the US thanksgiving?

Pork meat alias Carne de Fiesta is to be expected but everything else goes. However, there is the Roscón de Reyes, while Turón and almonds are given during the entire season. The Roscón is made with dried, candied fruit, sugar, eggs, yeast, butter, milk and flower. 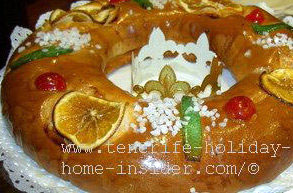 This Christmas sweet which is generally bought may hide a tiny nativity scene figurine inside. We may wonder if it's true that Corte Ingles the oldest Spanish mall in Tenerife offered such a cake with gold nuggets to be found by a lucky buyer.

Otherwise, the Father Christmas cult between December 24 and 25 is there to stay,  too. And not only because of tourists with that tradition, as you may very well guess...

A guide extension for the real Christmas and the Reyes Magos Tenerife, such as in la Orotava including business, bus transport and more

Go to Photo of the day December 24 with many links to Christmas photos of the biggest Canary Island...

More events on the biggest Canary Island for Christmas and New Year.

People always want to see photos of the Puerto Cruz carnival which in 2018 will start in less than five weeks after the three kings Christmas parade.

From Tenerife Christmas back to Home

Very interesting information about the holy kings from other sources here