Why a Roscon de Reyes record of Tenerife events?

In fact, the latest Roscon de Reyes Three Kings bread preparation in La Orotava was the biggest so far with 700 kg of weight.
6000 people had to walk past 310 meters of this Christmas cake to get their cut. 4000 Roscón portions and 600 liters of hot chocolate were handed out. This was a record sale for all Canary Islands after six previous Tenerife Reyes Roscón Fiestas since 2012. 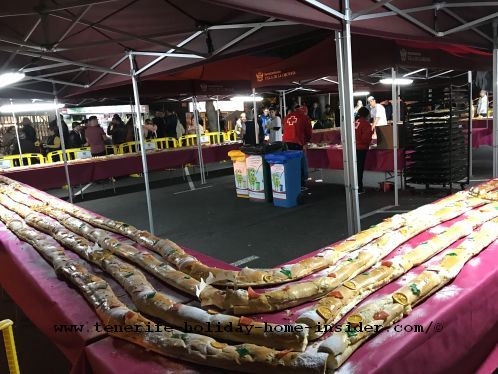 The photo portrays the Roscon de Reyes partly filled with cream of chocolate spread. Everything was laid out on squarely arranged tables in four parallel rows.

Involved in the making were originally the Pasteleria La Manobuena and the Panificadora León a bakery of La Orotava. 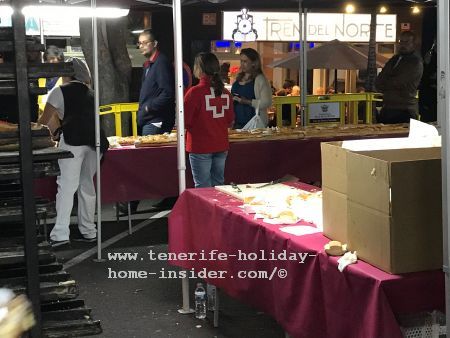 Bakery tables full of flour, bakers and Red Cross helpers who buzz about 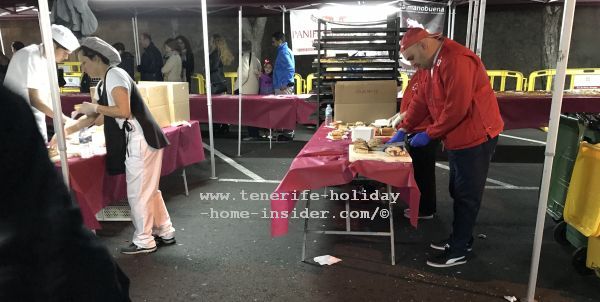 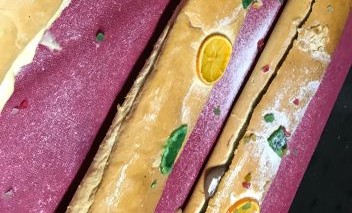 The food preparation show was said to have started by 4 p.m. but the dough was probably done already the day before.

How get to the Roscon de Reyes celebration?

You almost immediately glimpse a square area with low fences when you enter Avenida Emilio Luque. That's the street above the Titsa bus terminal of town. Get there by the steep stone steps next to the nice shoe store of the station. 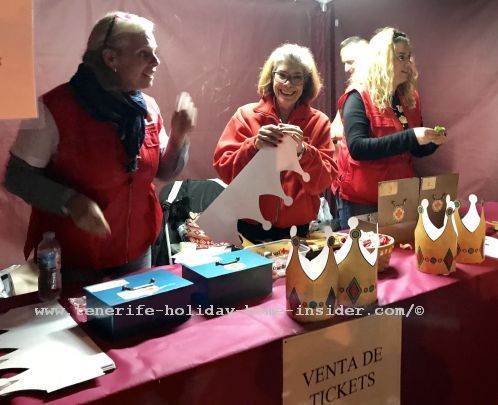 There, tickets for the Roscon were sold for 1 Euro each while a cup of hot chocolate set you back 50 cents. All proceeds were for the Red Cross of the town. The people who waited for their turn in cues that looked like 500m long were entertained by live music. 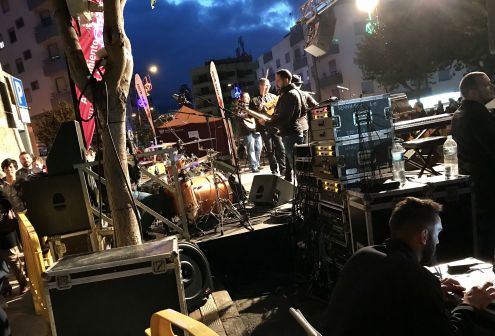 Musicians and sound technicians were ready for the party to begin

The bands Jeita and Alegranza Folk were on the agenda. One of the musicians knew how to imitate some sounds of jungle animals to the great amusement of children and bystanders. 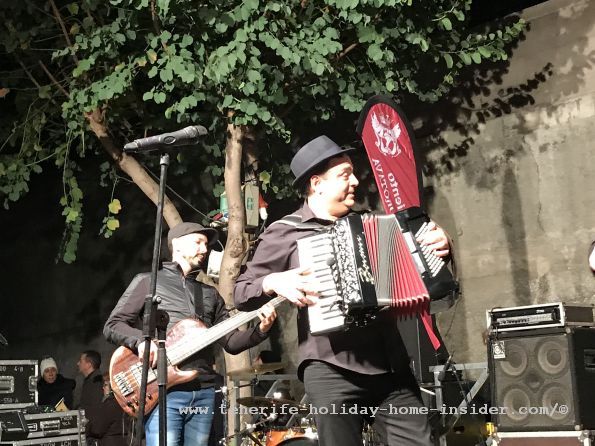 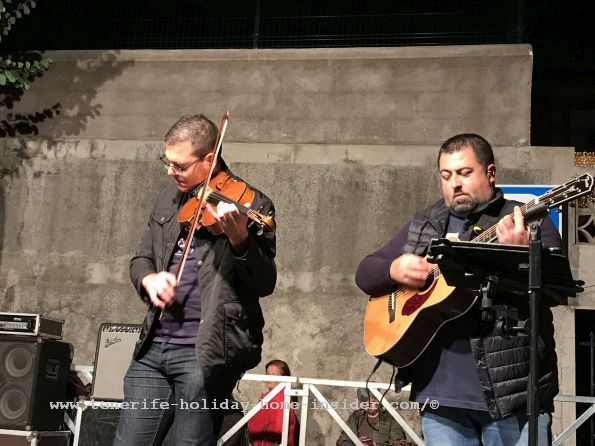 Some of the music played sounded like Irish folk music. A Violin, a Harmonica and a Guitar contributed to the happy tunes. By the way, a speaker announced that the person who would find a small hidden  Rey Mago emblem inside his Roscon de Reyes sweet bread during the Fiesta could hand it in at the Town Hall to win a nice prize.

When is the Roscon de Reyes eaten?

Spain's traditional Christmas cake is usually enjoyed at a party on the night before Reyes or on the morning after on the twelfth day at Epiphany. Then, the children in Spanish speaking countries receive the gifts that the Reyes Magos the Holy Kings left behind while the kids were asleep. 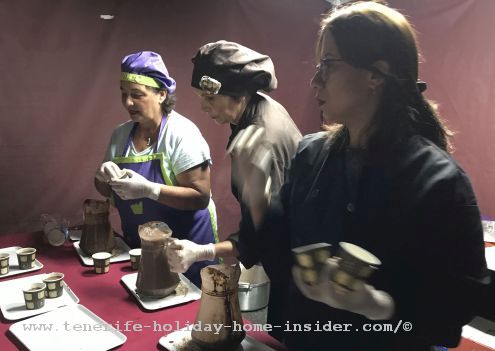 Unfortunately, the Christmas  Roscon cake in the Orotava Fiesta tent could not be dipped into the hot chocolate, as is custom. Why?  The cups were too small for it.

They were 125 kg of so called Harina de Fuerza flour made from wheat, 50kg sugar,  fresh yeast from a bakery, 200 eggs, full cream milk, 10 kg of butter, grated lemon peel or orange bloom water the Agua de Azahar or grated skin of the same fruit, dark Rum and Vanilla beans or essence.  Thick sweetened cream or Chocolate spread were for the filling.  About 40 kg of candied fruit strips were used for the topping.  The result of it was delicious.

I would love to try a compromise of a classic Brioche Beesting cake with a caramelized honey and almond topping, as soon as I have a real oven. I would use Kirsch Wasser or Amarento instead of Rum. I would prepare a filling made with Vanilla custard enriched by much thick real butter cream. Why? This used to be my late hubby's favorite of all cakes.

History of the Roscón de Reyes

Nobody knows exactly when its celebration started as the origin of the Three Holy Kings the Reyes Magos is also legendary. Many believe that the custom goes back to the fourth century in Northern Spain and Southern France.

In any case, the three kings also known as the Oriental wise men brought gifts to baby Jesus who had been indicated to them as an important new born king. This happened  by an astronomical event i.e. an extraordinary star. The kings were Caspar who had a dark skin, Melchior who had Caucasion features and Balthasar who looked Asian.

From Roscon de Reyes back to Tenerife Christmas