NTenerife parking is one of most interesting topics. It's a major part of Tenerife driving. It may spoil it. For instance, parking shouldn't be a problem in the Teide National park. Wouldn't you think so?

So why is their a parking shortage for Tenerife driving by Mount Teide with its luxurious, smooth mountain roads? 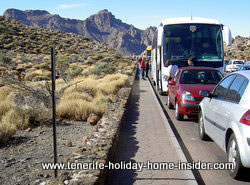 Look at how cars blocked part of the Teide Parador Hotel bus lane. Tourist bus drivers complained bitterly. This was on December 26 of 2011. Finding any parking space in Masca strikes me as even harder. Your only chance is to be one of first visitors to arrive there in the day. 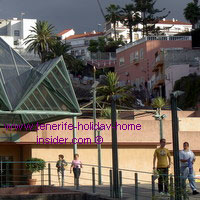 Fortunately, free or partly paid for temporary parking by the hour has become possible by big Tenerife malls and shopping centers which provide it in their basements or sometimes for free on upper levels.

Always keep your shopping ticket of malls to help to pay for Tenerife parking. Mercadona the Spanish supermarket assists with such a bonus, for example.

Of course, AENA of the Tenerife airports gives you airport parking. There, even take you dog for a quick leak by the Tenerife South airport car park.

Take into consideration the small size and rugged geology of the biggest Canary island and notice that efforts are done to better its parking situation...

So how did Puerto de la Cruz score when it had ideas for landscaping the Tenerife beaches Spain at Playa Jardin?

Already, it had the car park, which is only 600 metes away from Punta Brava. Get an idea of its huge parking grounds by the bird eye picture above. Mind, only a 3rd of it is revealed on photo, as it stretches as far as the town's old port on one side and to Loro Park on the other. Indeed, the free Puerto Tenerife parking lot show up right behind the castle Castillo San Felipe. Notice the white triangular roof tops of some of Loro Parks buildings...

By the way, the Castillo is the big blue square inland at tip of the breakwater, which you see at the end of the parking zone by the ocean.

This monument, event and exposition center is exactly adjoining the new beach, the re-modeling of which had been in the pipeline since 1953. The photo above shows good free open air parking options in this place.

Give the car attendant a propina (free gift for service)! Mind that he isn't officially employed by anybody.

Also notice big caravan trailers standing parked off by the shore... There are no caravan amenities, though...

Perhaps one day, this cheap parking in Tenerife will not be a free option any more neither for the big vans nor for normal cars.

Parking penalties in Tenerife and Gruas

Never park next to a yellow line, even when there's a huge empty pedestrian pavement. Offloading something from your car is not even allowed there when it takes a few seconds. 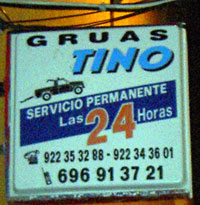 Gruas by Tino for vehicle removal.

Avoid the quick collection by town municipal Gruas, such as the Realejos Service gruas by Tino, as depicted beside. Of course, somebody may have parked you in. Either way, it may work out expensive. Gruas are vans with cranes. Actually, their drivers are not mean. They only do their job which helps to punish unlawful Tenerife parking... Gruas make your car disappear for parking sins faster than you may think. This can happen all over Tenerife.
Parking fines which are those revolting car stickers which were left on your vehicle by police men are not funny either.
A fine in 2012 could be as high as €200 for a parking sin of just a few seconds. Your penalty is only less, when you transfer about half of it immediately to a bank in Santa Cruz Tenerife capital or pay straight away at the relevan police station. This is written on the back of the parking fine ticket.

By the way, this ordeal happened to a visiting friend from overseas.

When we came back from an outing, her car was gone. I hadnt known that she left it in front of a garage.

What do when your car is gone?

Well, going to the policce station on the spot and asking nicely for consideration helped in our case.. The Tenerife parking fine was torn up. Also, we were so lucky that Tino the Grua driver (Crane truck driver) wasn't sleeping yet. His service plaque advertised it as for 24 hours, though.

What do the yellow lines at road sides mean? 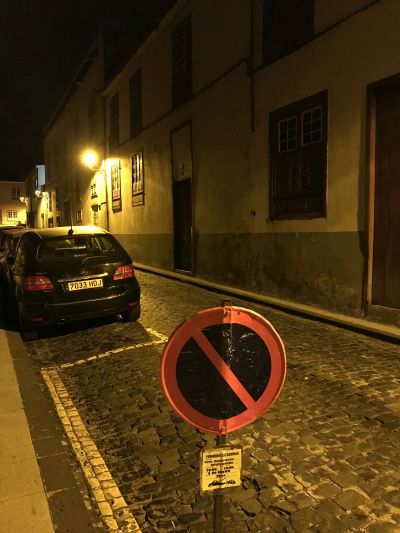 Yellow lines for no Tenerife parking zone in this road of La Orotava. Spot the car parked just outside the zone...

Generally, encounter beach side parking luck before 9 a.m. and during Siesta (Tenerife midday break) from 12 a.m. to about 4 p.m. or, when there is a major soccer match broadcast by television.

Where park in other Tenerife town? 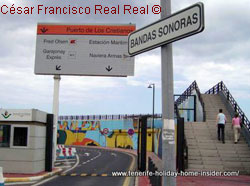 The Los Christianos Parking grounds which are depicted beside are also near the town beaches.

Accommodation with parking by Puerto de la Cruz: A magic apartment in a holiday resort with easy free parking 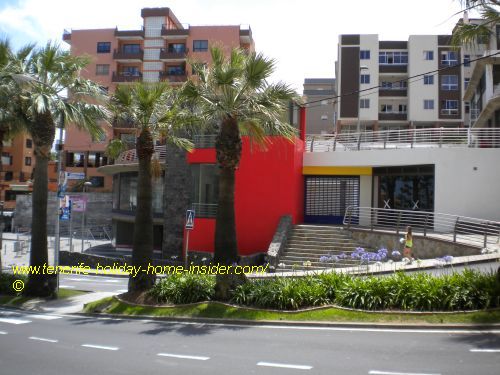 Tenerife parking on Plaza Bencomo Los Realejos in the red building depicted above.

Parking in Tenerife in its capital without absolutely any stress

Where best park in Garachico by Tobacco Arturo

Your help is needed.


Please, share how best to park in any other Tenerife town if you happen to know it well. This will make car rental also less stressful, as it helps much to have an idea where to locate such precious spots. Use the comment section on the bottom to let others know.

From Tenerife parking back to HomePage Tenerife holiday home insider.