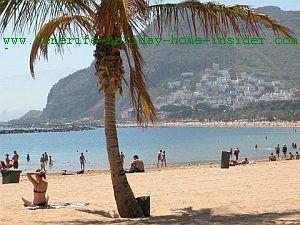 The photo of one of the best bigger Tenerife beaches Playa las
Teresitas
beach is by the late Ursula Astrid Ruppender.

The image  above also portrays the almost Hundertwasser type cluster village. It hugs the Anaga mountain slope on one side of the Atlantic seashore. It is the lovely fishing hamlet San Andres.

In fact, this beach location came about in 1973 when three separate adjoining seasides became one.

More about it just now...

What about safe swimming?

The following photo is your answer. 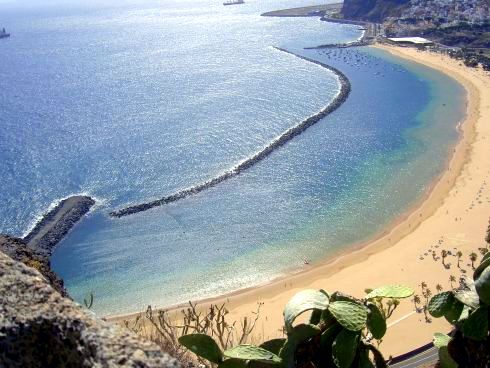 Learn why Las Teresitas needed more than just one parallel breakwater by San Andres. The parallel stone barrier is about 500 m off shore in some places.

This seashore is 7 km outside Santa Cruz. It's almost by the most eastern corner of the island. This spot is about 150 km from the coasts of Morocco of north west Africa, but below the latitude of the Moroccan beach resort Agadir. You can see it all by scrolling eastwards from the Tenerife maps to expand, Why maps? You can make more out of one. 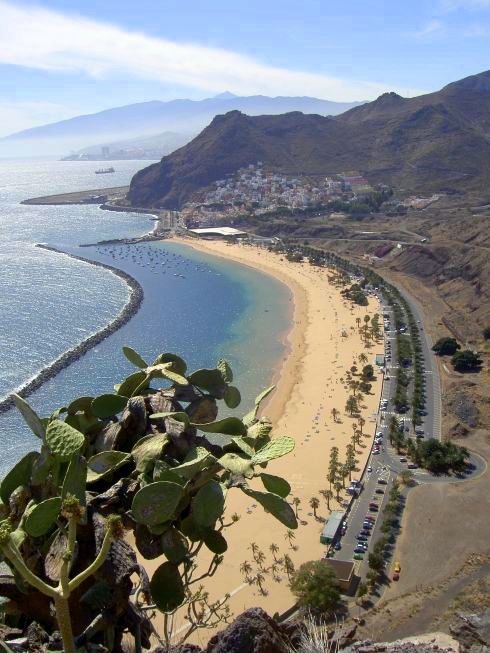 The sandy part of the subtropical Playa Las Teresitas stretches to about 1500 meters. It is just under a 100m deep. It starts at the fishing port San Andres. It ends by a steep outcrop of the biosphere the Anaga Massif.

Why part of the Spanish or Western Sahara is now in Tenerife.

This is only a peculiar fact or a half truth.
Why?

The Teresitas golden beach sand was carted to the Santa Cruz free port twice in big ships which was done for beaches of Tenerife down South too, by the way.

All in all, it took  272800 tons of African desert sand for this main beach of Santa Cruz alone from the 1970ies onward.  The fine dune sand gave the instant bronze tan to its shores. It made the area big and beautiful. More depth for the deep roots of palms and sea grape trees, but not enough for normal toilets, unfortunately.

They are for everybody. Even for those who are not strong swimmers or snorkelers.

Some even go there to fish with or without boats. 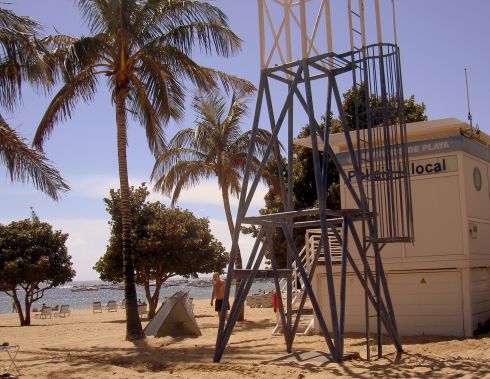 By the way, there is also a Policia Local a Teresitas police station, as portrayed above. 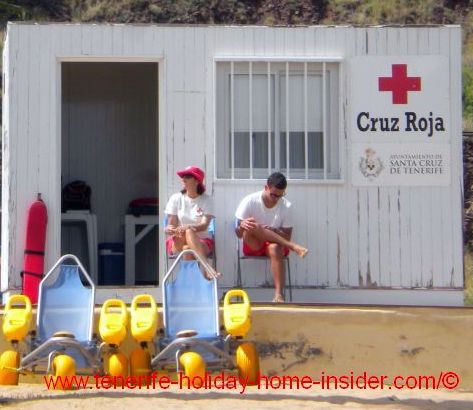 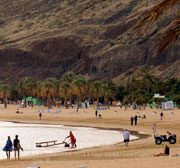 Two beach guards on your right are dressed in red.

They are about to haul in one of the rescue boats of beach Playa de las Teresitas.

They pull it up with a motor vehicle to park it off in a low building nearby.

They also have their own Red Cross station. 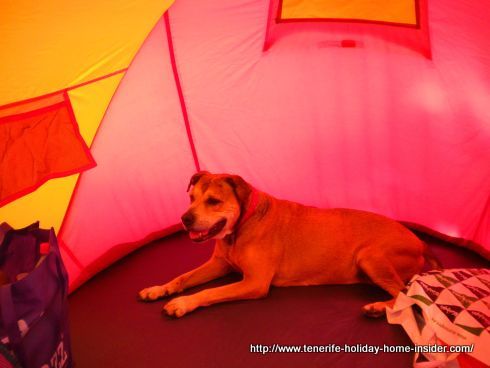 We left the tiny tent near the beach back end. Convenient near a sandy car park... Don't leave a pet alone in a tent during high season when temperatures rise. Our Jesse was extremely happy, as you can see. This short stay beach camping facility wasn't only dog friendly. It also came handy to breast feed a baby and to change nappies in privacy.

Major beach alterations which include a dog beach section for 2018.

This is a long story and to be honest, I would only really welcome a swimming bay for dogs. That's me and in the end I usually see the positive side of all changes.
Nothing has been cast in stone for our pets by this seaside. Their will be two options for a spot by the shore end or by the boat side. It will be an experiment for time being. 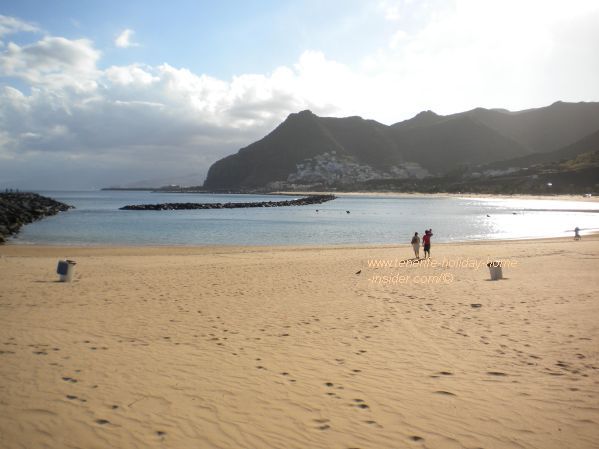 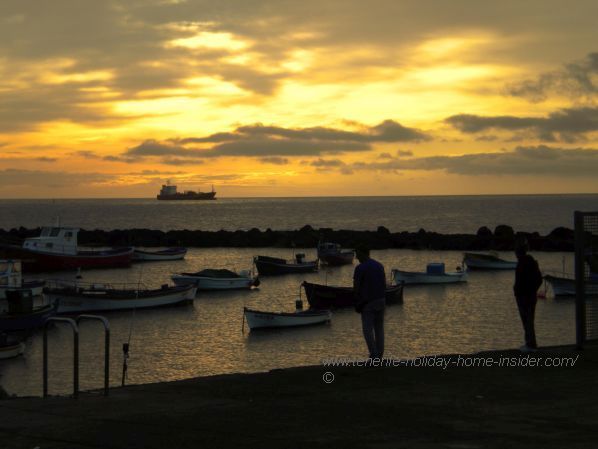 Las Teresitas boat side at the end of the beach for bathing. 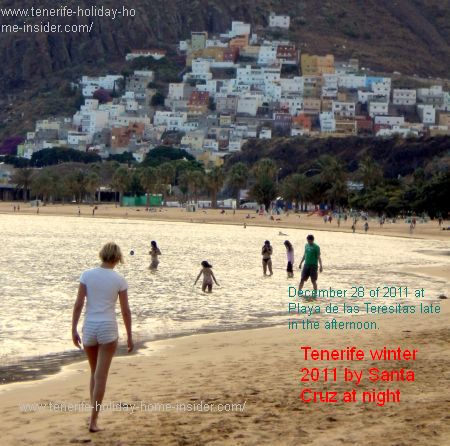 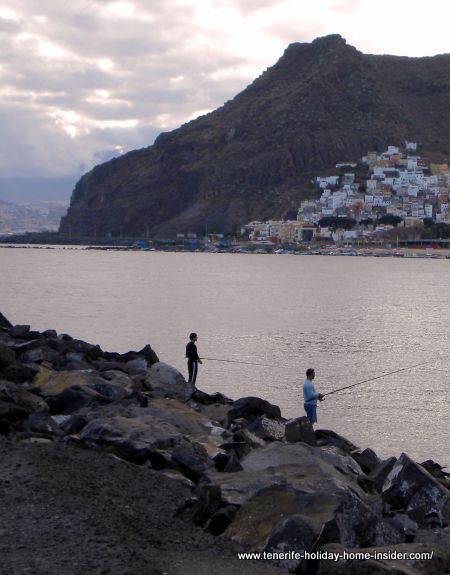 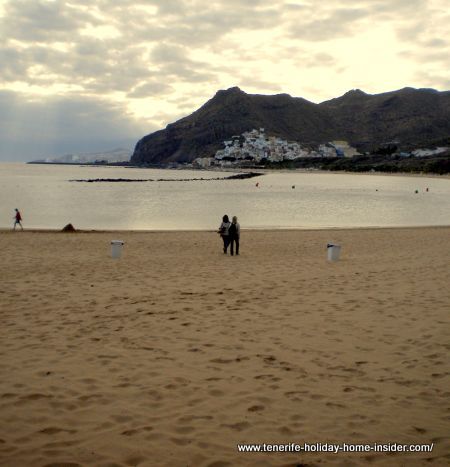 The Tenerife beaches Las Teresitas are warm and cozy, even under the winter sun, unless you arrive too late in the evening. On some days, it feels like looking with pink glasses at the subtropical scenery with its African light. 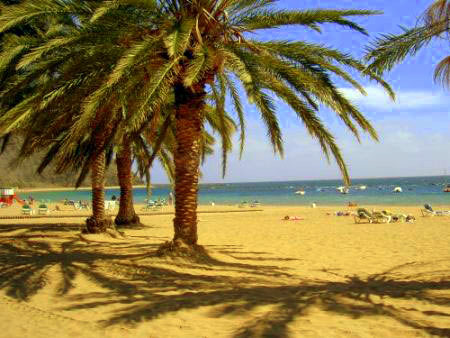 Las Teresitas beach bay with San Andres is below the green Laurel forests of Taganana and meadows of the Anaga mountains which protect the bay together with the barrier.. You wouldn't see Las Teresitas off the Calatrava auditorium   as the view is blocked by large cliffs.

Titsa runs frequent buses along the coast to its terminal Teresitas which is depicted beside. They leave from the main station in Santa Cruz.  Its people make great use of that facility. By the way, 60 cents may still get you with Titsa 245 to the capital's main beach.

On the other hand, car parking is no problem, unless, on a public holiday when all Tenerife beaches are crowded.

By the way, make out the drought stricken country side of December 2012 by enlarging the photo. The beach palms hardly suffered, though.

A less common perspective of Las Teresitas beach and a bit of fashion. 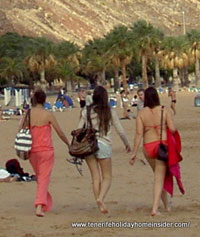 Life on the beach goes on. Ladies in gay colors stroll along. The mountains with their unusual afternoon glow seem to echo the color of the sand while they separate the Teresitas seashore from the naturist beach Las Gaviotas. There,  at the end of Teresitas, a vertical jetty stretches far into the ocean. You'll discover yet one more of the fishings spots of Tenerife at its end, albeit this time not on break-neck rocks.

How Tenerife Chicharreros feel about their beach?

Santacruzeros called by that nickname and other island dwellers appreciate the safe main beach of the Tenerife capital very much. They swarm to the seashore on holidays. They come to snorkel, to go out on boats, to swim and to sunbath. Some bring water skies or boogie boards.

They sit on the golden sand and celebrate with cool beers, wine, sandwiches, Cerrano ham, olives and cheese.

Make out some plastic fun boats with slides for hire on the next photo. For kids and the young of heart, you know. 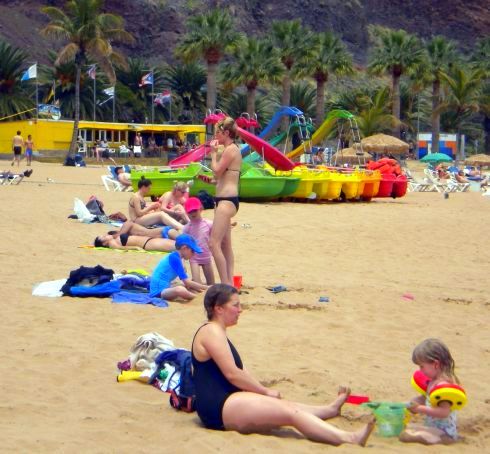 Camping or just sleeping over? 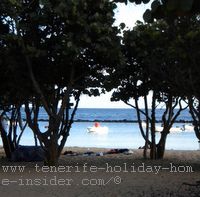 Enlarge the photo with the big blue package under the trees! Is it a dismantled tent?  Imagine spending a romantic night in one by a seashore , such as Playa de las Teresitas... Not allowed officially, you know.

Playa Las Teresitas is almost always a welcome alternative when the north of the island is cloudy. The Anaga mountains keep it warm in its back and, the Santa Cruz sun does the rest to heat it up.

I, personally, love the beach area closest to the mountain. There, I always find a palm tree that provides just enough shade.

The best time to avoid wind is in the morning.  That's when my friend Guenther calls Las Teresitas the most beautiful of all Tenerife beaches. 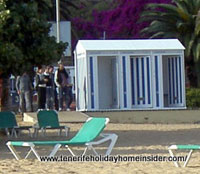 The Tenerife beaches of Las Teresitas are not as rudimentary, as they were in the past. Notice some neat beach shower cabins that are now white with toilets in the back. There were more such cubicles under trees. All has been revamped again for wheel chairs in 2015.  The toilet facilities are camping style.

Why? The sand doesn't go deep enough for another method.

In the past, you just washed off all sand in plain daylight at the Tenerife beaches Las Teresitas. Then, you stayed in the sun to dry off.

Once upon a time, strange women bathed nude under the full moon at Teresitas. Those were the days of the Anaga Baladero witch hunts above San Andres.


Beach refreshments for under €10.

Not all beach bars are open every day in Winter or Spring. They seem to take turns then and serve delicious snacks or even a la carte menus. One Teresitas beach eatery has hot spicy Patatas Bravas. All bars or so called Kioskos at this seaside are worth to be explored.

Indeed, there are some important changes on this Santa Cruz capital beach

On November 19, 2018 I visited Playa de las Teresitas again to see what's new. All beach bars have names now, rent out Balinese beds, umbrellas, pool loungers and may even have hammocks. 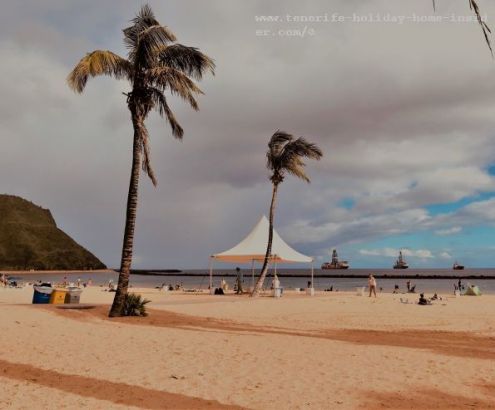 A beach Gazebo with a white canvas roof, one of several that now offer free shade to the people by this Santa Cruz seashore

A Gazebo that stood near the seashore caught my eye on first sight.  Later, I noticed that all Chiringuitos also called Quioscos by the locals are now all white and of the same style. There are supposed to be eight.  I was told that the old ones were demolished about three months ago. Balinese beds stand in front of the terraces. 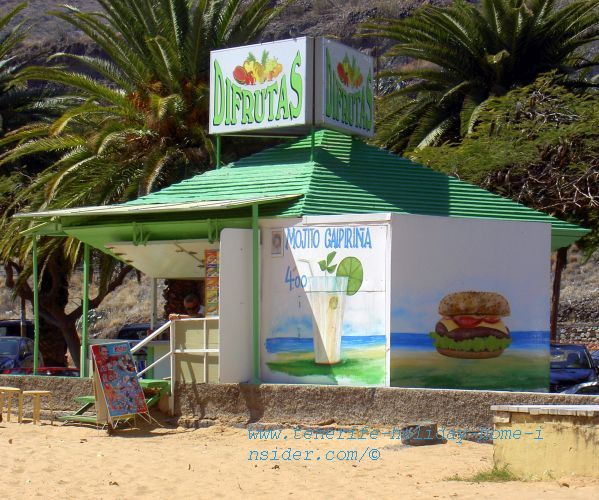 The Chiringuita Disfrutas is the only one that looks almost like before, all in white now, though. It still serves its famous juice and its Mojos, but also cocktails I believe and Hamburgers 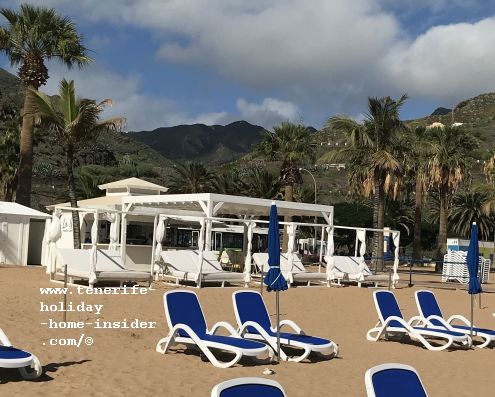 Chiringuito Caracol with Balinese beds in front, open until 10 at night. Serves Gourmet food and best wines but also Dorada beer. Its food display includes prices like all other Quioskos too. 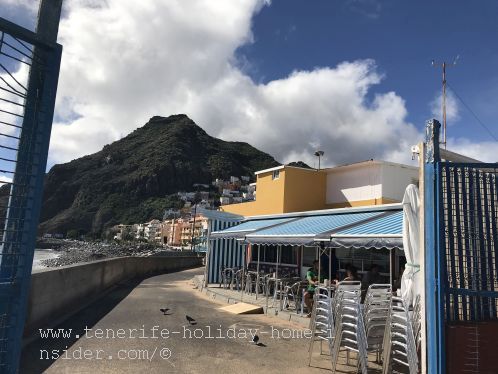 Las Teresitas Cofradia the fisherman Guild of San Andres at the beginning of the beach which in the past served a seafood portion that was far too big for my liking. Perhaps, that has changed.

An emergency boat can enter by a marked ocean section. Life guards on the Tenerife beaches Playa de las Teresitas will only be on duty from about 9 or 10 a.m. until 5p.m. in Winter and 7 p.m. in summer. Now you can hire an umbrella, pool lounger or boat at all Chiringuitos, all of which display their food and drink. By the way, there seem to be more and improved showers and toilets now as well as change rooms. The police and red cross stations are as before. Beach Volley courts are there in Summer. The parking bays accommodate all kinds of vehicles. 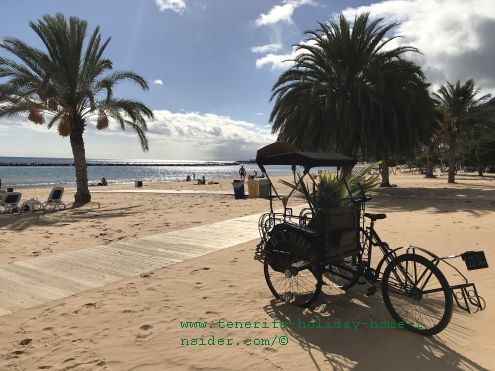 I loved this antique bicycle with a cart by El Bambu bar Quiosko where I only paid 1 Euro for a standard bottle of water. 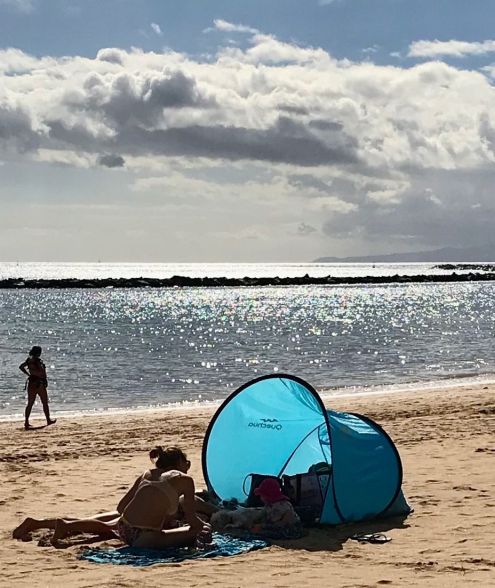 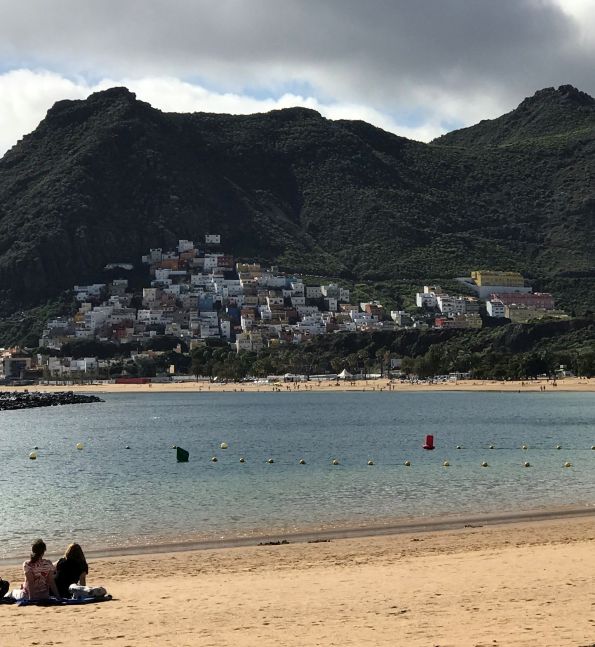 Marked emergency boat entry by colorful balloons on the water

The other Chiringuito names I spotted were El Bambu, Strasse and Isla beach. You get everything from sandwiches, Tortillas, Bocadillos, small salads Tapa style, pastries, Ice creams, you name it. 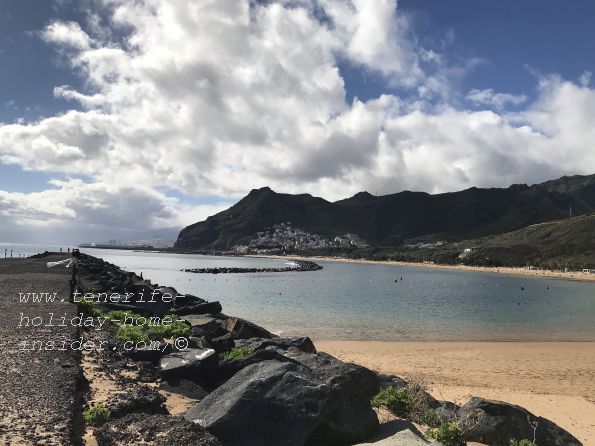 The Tenerife weather at Teresitas on November 19, 2018, in the afternoon

A generous beach boardwalk leads to all sorts of boats, except fancy yachts. Most dance gaily on gentle waves.

Beach Playa Las Teresitas hasn't become a posh tourist location, as yet. It is rather unspoiled but has all that counts. Unfortunately, the Bohemian style I liked so much is gone. Luxury trends prevail.

The unspoiled country behind San Andres

Explore the beautiful meadows and slopes of the Anaga above Las Teresitas Beach...  Get some indication by the depicted map Taganana Benijo.

There is a turn off from the coastal road at the entrance of San Andres town that borders Teresitas.

There is also the new Rainbow bridge that interlinks San Andres Tenerife with Las Teresitas beach, and the boat Marina dry-dock.

Also discover the legend of the witches at this seaside by San Andres by the history of beach Playa Las Teresitas. and those of the Anaga Massif.

Ruin of Monte Suculum and beach behind 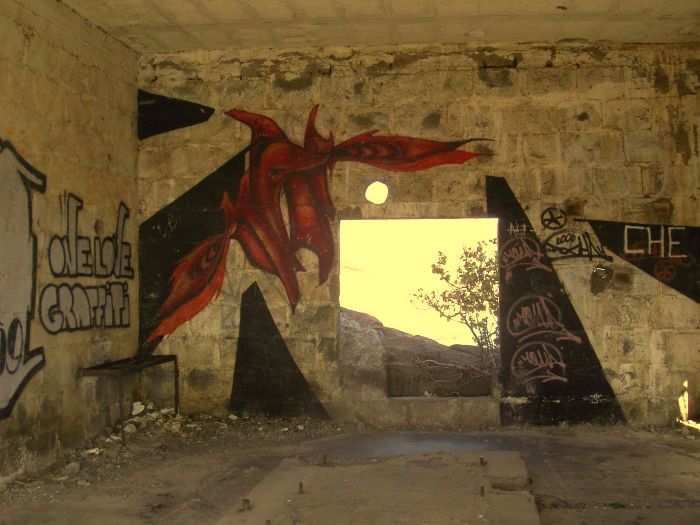 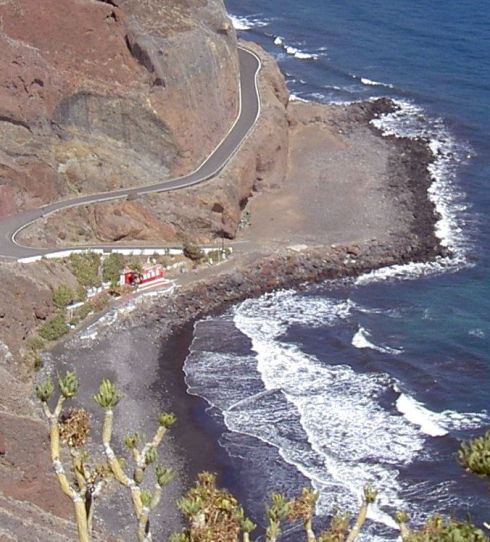 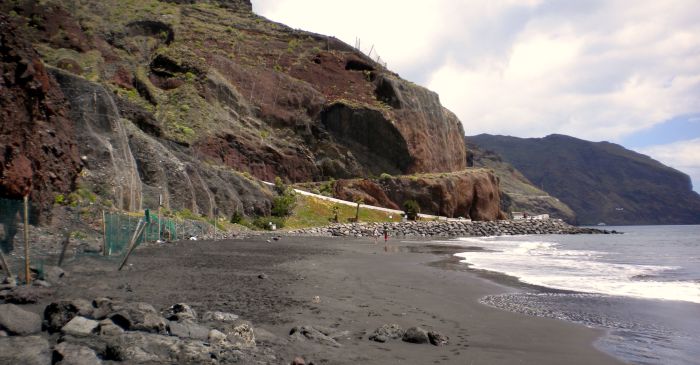 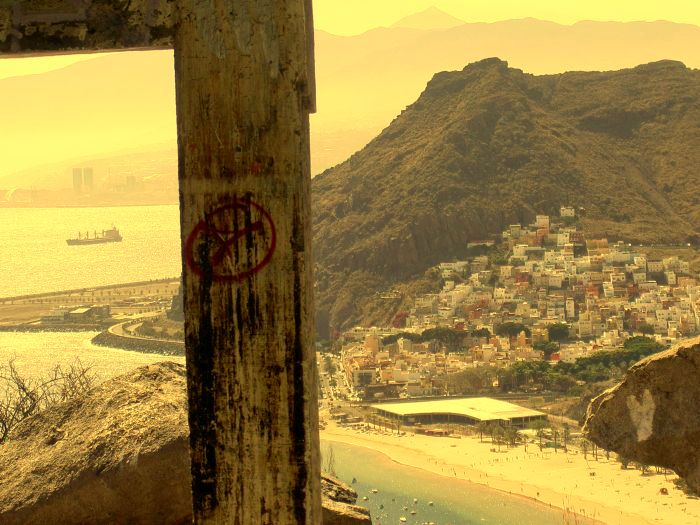 Indeed, there is an almost virgin beach without amenities next to that of Las Teresitas. It's behind Montana Suculum.

Buses from Las Americas and other southern towns to Las Teresitas.

Call 112 for emergency after spotting an injured Turtle at las Teresitas More about the threat of plastic to ocean wildlife and the release of turtles at this beach by a Spanish Media publication here.