Why a breakwater was much needed at Playa Las Teresitas and a blessing elsewhere. 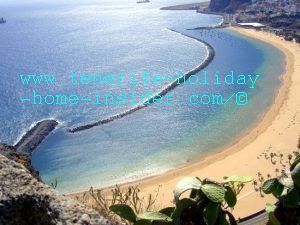 The breakwater of San Andres Santa Cruz de Tenerife capital is a typical construction for beach or port environment, as is typical for Spain. Mind Tenerife is only taken as an example to show it, as it is one of the many Spanish provinces.

Don't just look at an ocean barrier which results in deviations of ocean currents.

More reasons for the breakwater by the big Santa Cruz beach

Look at the image of this jetty above... Notice almost five stone barriers which are visible in the turquoise waters from the Anaga mountains above. They were not just meant to protect man, beast and belongings. They were also required, as the precious sand had been imported at great expense all the way from the North African deserts.

Two ocean brakes are formed by promontories of the Anaga Massif. Click to enlarge the picture to let you better trace the faint jetty at the far away end. See how this mole type pier extends from the mountain cliffs out to sea. 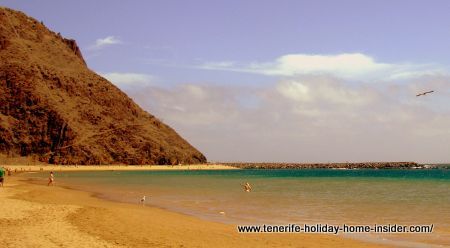 This constructed jetty is a beach barrier at the same time.

It reaches to where the seagull is just about visible in the skies.

There, the mountain outcrops flank Las Teresitas beach at one end. Climb a few steps and proceed walking on the jetty. Let your gaze reach over the wonderful bay as far as the tiny cluster settlement of a fishing community.

In the opposite direction, discover one natural promontory right behind the San Andres fisherman village.

Also, encounter the next one. That's a fabricated stone wall which goes out into the ocean. It serves as wharf or pier and dry dock for the fisherman guild Cofradia of San Andres.

It's also a jetty that stops oncoming waves a little. There, two bigger brightly painted vessels with wooden hulls are kept on a dry dock. This shows that the whole set-up may be quite large and may include storage sheds.

Three young men were fly fishing from the artificial stone pier. This jetty isn't built on stilts either but helps as artificial ocean barrier  A little further colorful wooden vessels were attached
to a small boat pier. Many more were anchored further out. The Teresitas bay often shelters more than 100 fishing boats thanks to its stony fortifications which keep pretty good control of the Atlantic water elements.

Spot miles of sand and tropical vegetation opposite the beach jetty by the 1,3km long shore of Playa de Las Teresitas.

Discover in the following photo, how this jetty serves as a brake for big waves. Otherwise they would race frequently over the adjacent bay as much as 80m inland, although it's partly fenced at its other end by a natural beach flank. Yet, the main task of this beach barricade is the embracing
of the big Playa de las Teresitas bay. 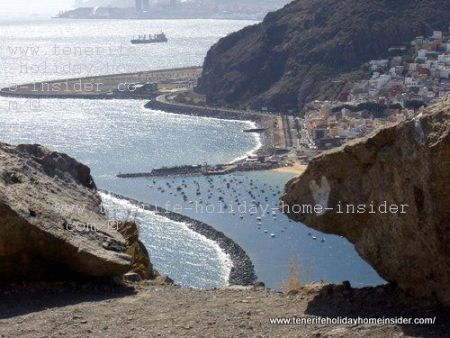 Four jetties to stand up against the elements

All four of the man made beach breakwaters give an almost exact indication about the direction by which waves hit the bay. Each stone jetty was placed placed in a slightly tilted angle to brake the oncoming seawater gently. The image of the breakwater where no beach is visible is ideal to understand, how winds and waves seem to approach the sea front.

Make out the almost straight line of the parallel boulder barrier which runs all along the popular shores of the las Teresitas beaches. Only the jetties run towards the parallel stone wall in an angle but don't touch it.

It's said in a Wikipedia article that this barrier is 150m long. It's bound to be much much more than that, as it's obviously fencing nearly 1km of beach.

By the way, the angles cause you to see a couple of gaps. There the waters of the Atlantic of Macaronesia may take their natural course. This is where the fishing boats can slip through to travel far.

The artificial moles of Play de las Teresitas help to secure the costly Saharan beach sand. 2800tons of it had been claimed by the ocean from 1973 to 1998. It was expensive to replace them.

The very long parallel stone barricade was calculated by civil engineers for the sake of the environment of Santa Cruz de Tenerife. It holds up greedy waves together with the two offshore breakwaters which are jetties at the same time.  They create a safe haven against powerful swells for the numerous securely anchored fishing boats of San Andres and let you swim at your leisure.

However, all those breakwater installations are not enough since August 2011.  The fishing village by las Teresitas needs more to protects its downtown by the shore as well construction of which is said to have begun in summer 2015.

Offshore piers only for people 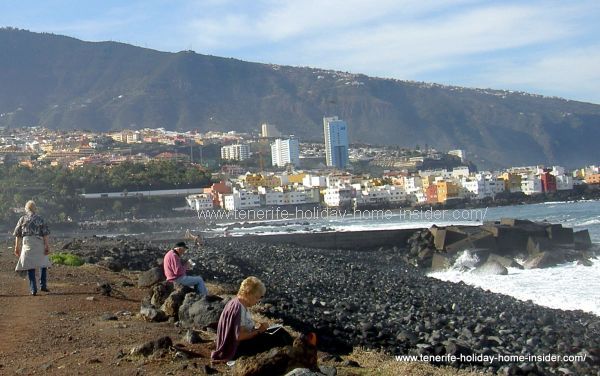 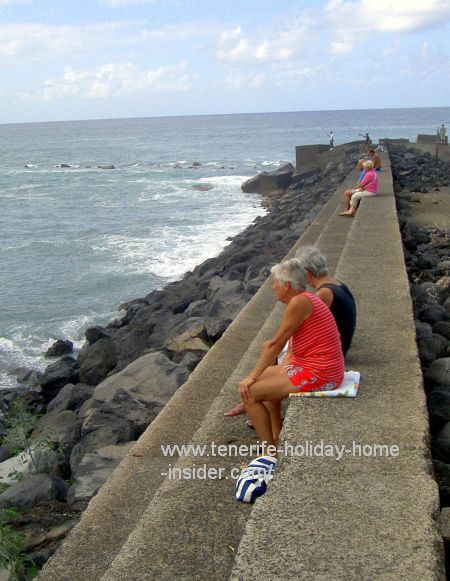 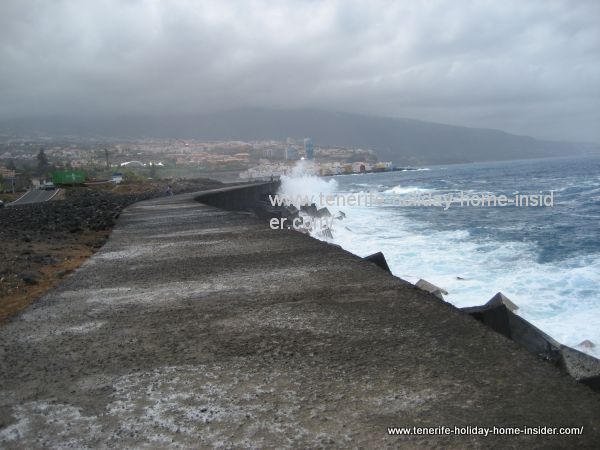 Contemplate the Tenerife offshore jetty of Playa Jardin of Puerto de la Cruz together.  It is joined at its end with another 300 m long beach Mole fortification which is called Muelle in Spanish. Both give the Atlantic a good break. However, the Muelle which runs parallel to the seafront is not always sufficient. Repairs are constantly needed. Needless to say is that it wouldn't be safe to attach boats to none of the two Puerto Cruz ocean obstructions.

Learn how the up-swells of the Atlantic ocean currents or the rather typical Canary currents and Elysian winds all contribute to one of the world's best climates.

Looking for appropriate Tenerife capital spots to sleep the night?

From breakwater back to Santa Cruz Tenerife the capital.