The Tenerife concert hall features celebrity pictures inside as well as outside.

Some are displayed in the ticket office. There, you are bound to notice them by photos on the walls when you enter. 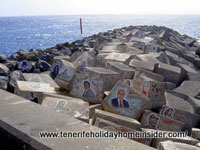 However, you would never expect celebrity images as stone paintings outside this opera house of the biggest Canary Islands. There, find them as Spain art. They kind of fence off the main onslaught of the Atlantic Ocean. This was done by a breakwater. It's the perfect wave buffer for the Tenerife auditorium by the sea.

Most befitting are a couple of stone paintings of this wave breaker of the Tenerife opera house. One such stone art is a Santiago Calatrava image. There, the famous Spanish architect, whose second name is Valls is remembered with colors. He is depicted wearing glasses. Also, he is in a central position in the first line of the celebrity images. He faces his proud work the Tenerife concert hall by the Atlantic shore.

The other boulder painting features Canary Islands' President Adan Martin. He so much wanted the Tenerife concert hall to be built. Notice in this context that Tenerife's 'rival' Gran Canaria has another famous concert hall which was named after the Tenor Alfredo Kraus. It preceeded Tenerife's auditorium in 1997. Important in this context is also that Gran Canaria and Tenerife take turns for the Canary Islands' presidency.

Therefor, Santiago Calatrava Valls who is one of the most famous modern architects helped Tenerife out to get its own music and opera house. It opened doors about six years after its older sister in Las Palmas.

Of course, right in the front line of the breakwater's celebrity pictures is also the American king of pop Michael Jackson. The stone painting shows his bust with the according inscription. Note the American Ray Charles who is another famous musician who was much inspired by Jazz, Blues and rhythm. His image is further on the right.

The stones are all jumbled up. That's how they fight oncoming waves better. Also, there are unpainted gaps, as not all sides of the blocks were decorated.

Of course, virtually all celebrities of music received a place of honor by a concrete block painting of the jetty outside the renown Spanish architecture. Mozart's image and name, who is played so often at the Tenerife Capital main concerts is on one of the first that shows.

Not all of the hundreds of boulders which face the biggest wind side of the Auditorio have been embellished with paintings. However, there are more of the kind by the principle Tenerife music hall. This stone barricade continues to secure against strong waves alongside the bar and cafe of the opera house which has an outside veranda opposite the Palmetum park museum. The heaped up stones stop by the black fort.

Book the ideal, excellent accommodation for a night out at the auditorium by clicking here to select Santa Cruz hotels. Pick the boutique hotel Silken Atlantida Hotel, as it's very close to get to the auditorium on foot. A mere five minutes, unless the traffic light is red by the main road the Avda. de Constitución.

Other stone embellishments by the Tenerife concert hall.

Find your way to some more surprises. Discover big carnival stone paintings. They represent all the capital's carnival posters and they are in the immediate vicinity of the Auditorio of Santa Cruz.

Learn how more than one Tenerife jetty helps for many a purpose by way of pictures...

By the way, no scary crabs are crawling outside this concert hall on any of the breakwater constructions with images of celebs, contrary to the Muelle of Puerto de la Cruz with its bare stones.