The auditorium Auditorio Tenerife Adán Martin shows taste and extravagance, for sure.

By the way there are several Tenerife auditoriums.

They are all part of Santa Cruz de Tenerife which is also the name of the island, the capital as well as of the province which includes other islands. However, only one Auditorio is by Calatrava. That's in the capital by the same name. Very, very confusing, indeed.

A photo of the Tenerife opera house Auditorio Tenerife which speaks for Santa Cruz. 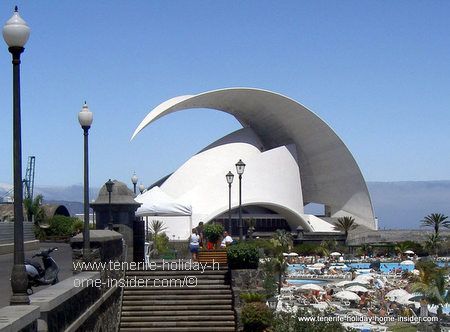 Auditorio Tenerife the Santa Cruz opera house with Parque Maritimo Cesar Manrique in the foreground.
Discover why this superb photo of the Tenerife opera house by Calatrava sums up the most important features of the capital of the biggest Canary Island, here. ...

Indeed its surroundings make the Auditorio Tenerife all the more popular.

The Tenerife Santa Cruz auditorium has more than good looks. Superb and often important international concerts within its state of the art building contribute much to Tenerife's culture. The enjoyment gained by tourists and locals is priceless.

More about latest opera news in this context by scrolling down to the bottom of this page and others already now. 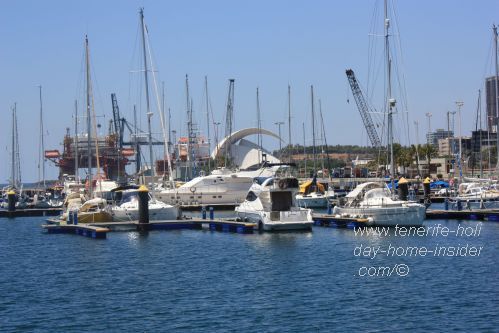 That would mean that you may walk home more or less along the seafront to your boat after an evening at the opera. A friend said he did it. Or stroll from the lake square of Santa Cruz the Plaza de Espana via the yacht harbor.

This Santa Cruz temple for the senses was finally opened on September 26, 2003 after a relatively short construction time of 6 years.

A quantum leap for Tenerife culture and nightlife of Santa Cruz.

Crumbling mosaics of the Auditorio Tenerife like at the Valencia opera house? 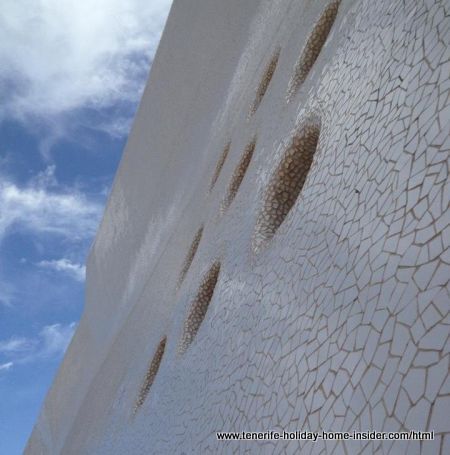 Tiled facade with mosaics by Tenerife main opera house in Santa Cruz.
So far, the Tenerife holiday home insider hasn't noticed any defects with the tiled facade of Calatrava's landmark at the edge of the Atlantic in Santa Cruz de Tenerife, as yet. So much to Tenerife attractions Auditorio de Tenerife.

The auditorium of Santa Cruz is a striking landmark or 'oceanmark' of the Tenerife capital and one of best, latest concrete and steel structures in the world.

The School of Bauhaus would be surprised if it saw today how its revolutionary ideas for architecture evolved in less than a century. 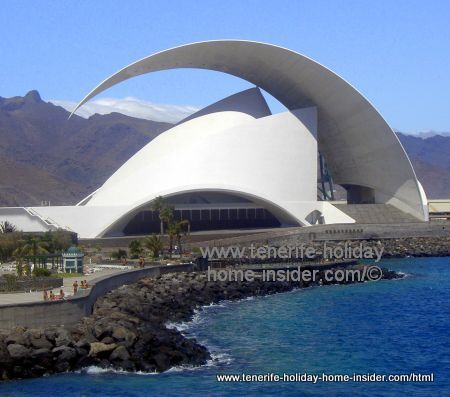 Tenerife Santa Cruz Auditorio in its capital with Anaga Massif behind. 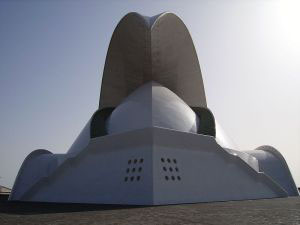 The above photo of the Tenerife concert hall in its capital looks nothing like the Sydney opera house from that perspective. Mind it's so often compared to the Australian auditorium by the sea.

Notice an another feature of this Spanish architecture that almost magnetically draws your attention. And not to forget the lovely landscaping with pond next to it... 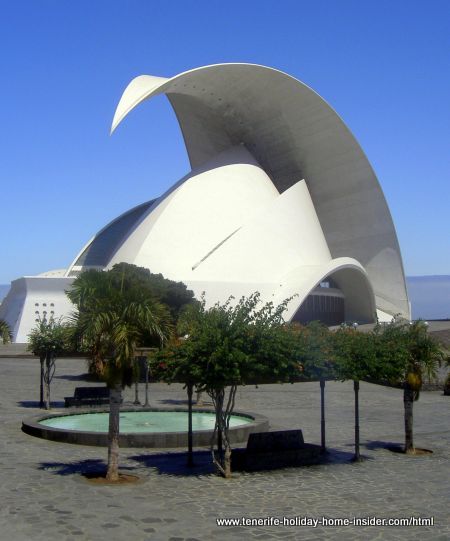 It's the gigantic white roof of the Auditorio Tenerife. It lures people to the seaside when they approach on the Carretera del Norte. The roof almost bows deep down and freezes up before it touches ground. However, that's mainly a perception when you stand close by.

Its top virtually covers the whole bottom structures of the building. To me it looks like one giant wide wing which is meant to protect priceless musical gadgets as well as visitors inside.

Notice its arched opening on the right side. There, sit inside or outside in its restaurant which has an enormous bar and waterfront terrace. 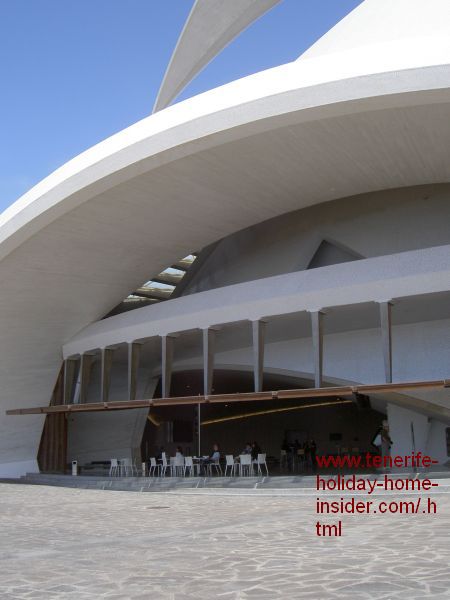 No doubt that the veranda of the Auditorio Tenerife is one of top Tenerife attractions. There, guests may enjoy a fabulous night with a glass of champagne watching the reflection of dancing stars in the ocean below.

Click the photo to enlarge it and notice the round backside of the Tenerife auditorium opera house. This is in its rear where it is also fortified by a the widest part of its unusual breakwater. Then notice the Santa Cruz twin tower apartment sky rises on its left as well a striking building on its right. This is the oldest mall of Tenerife a new version of the Corte Inglés. 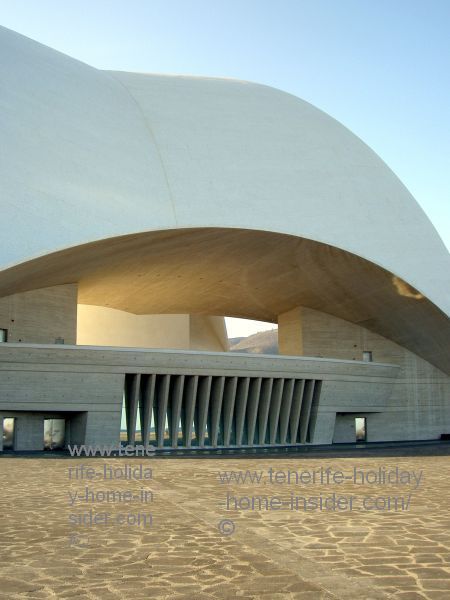 The important Auditorio balcony and back yard

This is where countless youth gather to hear the clock strike twelve to announce the new year from high above. Music raves take place afterwards on the large yard. Fireworks are part of it. A package of Tenerife attractions by the Tenerife Auditorio, indeed.

How the architect Calatrava sees his work

Santiago de Calatrava calls his work a composition made up of 'wings', 'nut' and, 'sail' (roof).

He also perceives it as a sculpture that is hollow inside.
In my mind it's also a multi faced sculpture.
The Auditorio Tenerife strikes us differently, depending from where we gaze at it.

Auditorio de Tenerife in the back by the sea shore.

Here is almost a frog eye view of one of the innovative Tenerife attractions called Auditorio Tenerife (Tenerife Auditorium).

The picture of the wing or, arching roof was taken from below in the back.

Indeed, the building has a rather curbed shape, when you see it from behind. Above all, from the huge bare stone veranda which opens out to the sea...

There, make out how Santiago Calatrava became displayed together with countless other stone paintings of many celebrities of mainly musical fame at the renown Tenerife concert hall called Auditorio de Santa Cruz Adan Martin.

There were objections, of course, when the first building plans of the most daring of Tenerife attractions were presented. That was long time before 1997. People in the town hall must have come forward to point out the high danger of ferocious waves from the Atlantic. They are now blocked by hundreds of boulders. It sure was no easy task to find a good spot for the auditorium's precise location.

It's said that the 100 m long roof alone weighs about 350 tons. It had been supported from the bottom up for quite a few years. Every time when a bus took me to the capital, I could make out workers on top. They were climbing up and down like busy ants. At inauguration time the supports were gone. 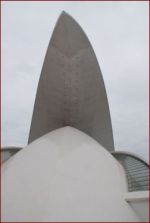 Here is the wing taken from the back where it resembles the elevated head of a cobra that is about to strike something.

It goes almost straight up and disappears beyond the normal photographic lens capacity.

It's said to have been covered with very small enameled fiber glass mosaics for protection purpose against the harsh sun.

The last three pictures are by the late Heiner Korsten. He was a German amateur photographer who loved to add Tenerife attractions to his Tenerife travel album. 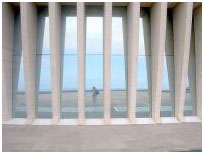 This Canary Island opera house has a mirrored facade by the same rear. It is broken up by many vertical running narrow, concrete ribs.

In fact, I could see my own reflection together with the ocean in the glass.

They say that the world famous 2003 Auditorio without sharp edges was declared a global attraction. Even the edge of the winged roof which almost looks free standing has nothing menacing, as it looks smooth from far. 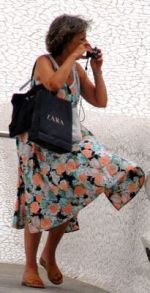 What is fascinating me the Tenerife Santa Cruz guide about this seaside concert house is the groove in its concave roof. It makes me think of the sculptural partly concave shape of a star flower.

Know that Santa Cruz gets occasional, torrential rains during winter. However, they normally don't last long, though.

Much water collects on this roof in its middle groove. Finally it gushes off by the pointy tip towards the Marina. There, it may run off towards the ocean. In opposite direction it will be washed over a very large terrace in the back into the Atlantic, as well.

Hence, it will not disturb nor enter main traffic areas, except perhaps, a parking lot by the concert building. Its storm water will not end up in the nearby port to disrupt trade.

Recinto Ferial by Calatrava in Tenerife.

Encounter Calatava's international exhibition center. It is known as the Santa Cruz Recinto Ferial. This adds to the attractive Auditorio Tenerife. In fact, turn right when you get out from its bar, venture past the black fort and proceed over the road to immediately see this fair ground.

Why you must visit the Santa Cruz auditorium more than once.

When I went there for the first time, I was a bit disappointed. Later on, I was all the more amazed. Then, I noticed the method in which seven meter high doors pull back mechanically and more details.

The architect Santiago Calatrava could set a nice mood. This was best achieved with a smaller cozier chamber hall which seats 420 persons in comfort. One almost feels like in a Victorian theater at the end of the 19th century. The stage is a retreating semi circle in almost classic style. Everything may be watched and heard from higher up.

The main concert hall which was the main purpose for the ambitious structure is for 2000 spectators. It also houses the Albert Blancafort organ.

This is all about an organ that attracts music instrument experts by its amazing sound.

If you were looking at the Auditorio from the direction of Palmetum Park you would be surprised. It reveals both halls of the auditorium under kind of pyramid shaped domes.   The smaller one is of course set towards the side. Domes and roof harmonize as a triangle.

What other Tenerife architecture is near the auditorium?

Find it beside the innovative  Cesar Manrique Parque Maritimo that's in stark contrast to a sturdy, round fortress in the sea. There slaves were once kept and history was made. 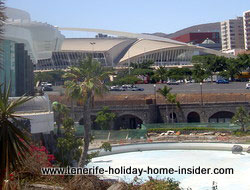 Parking by the Tenerife attractions of opera and music?

Much open air parking is a few walking steps from Tenerife's seaside music attractions in front of Park Maritim. This Tenerife auditorium parking space also serves for the Fair grounds Recinto Ferial opposite.

From Auditorio Tenerife back to Tenerife attractions.