Tenerife museums will add Palmetum, so I believe.

Tenerife museums including one for ethnic palms sounds amazing, doesn't it?

In my mind the whole park Palmetum is a Canary island museum not only for its 500 different palms but also for its additional other 900 species of botanical treasures. It's also living truth for an enormous man made park or palm forest under impossible conditions.

Indeed as per Spanish news of October 2013, the recreational and educational palm oasis has been opened for tour operators to do week-end shows from Fridays to Sundays by calling 922 534 477.

It must be emphasized that the Palmetum is a prime example of human staying power and imagination.

Palms from all over the world were imported. Many were grown painstakingly with much loving care from seeds by starting a botanical garden on a difficult hill.

Some had to be placed in hollowed out areas to fend off coastal winds. Others which could not be adapted, as yet, found a temporary home for research in an unusual building with eight corners.

The park Parque Palmetum as well as the whole of Tenerife island is definitely worth including in world culture tours and theme travels, because there are so many museums in Tenerife (museos) and sites that are well worth seeing. They include botany species of volcanic terrains. Find the latter scientifically categorized at the ethnic museum park of Teide at the Canadas Portillo center. 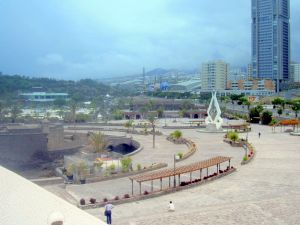 To see Palmetum you may go to Santa Cruz the capital and enter Parque Marítimo César Manrique which you find just a few steps from the landmark Auditorium of Tenerife.

The entrance fees are different in 2019. I am amazed to see that residents pay even less now. I have been there twice and it would be cheaper for me now. The Nonresident Adult fee is Euro 6. The elderly residents pay Euro 1,50.  More about prices at the end of this article.  However, the low charge will mostly go towards the upkeep of the park by the organization Santacruzsostenible.

The Palmetum Santa Cruz has been planted on a 40 meter high hill in 1996 on top of a city dumping ground. It stretches over an area of 112 acres which is bigger than that of the capital's alternative large park Parque Garcia Sanabria which is not only a favorite for the city's and island's people on retirement, but a must see for tourists and young people as well.

Palmetum's palms have grown well over the years despite great initial problems. Unfortunately, the designer and architect César Manrique of Maritim Parque where Palmetum was added on died in a motor car accident and could never see the fruits of the planting struggles. Subterranean gases were some of them. This was a costly and time consuming stumbling point to surmount.

Today, the park has not only enhanced the views of large Santa Cruz hotels nearby. It can now be seen like a hill palm forest from a nearby freeway as well.

What I like about the park is that one must surely feel like in a tropical setting with its waterfalls and ponds. However amazingly, this huge oasis of city relaxation is right by a beachfront as well as by the Tenerife capital's 'Twin Towers', fairgrounds and Auditorium.

In fact during its official opening beginning of October 2013, the mayor of Santa Cruz José Manuel Bermúdez called it Palmetum: an island in a city when he spoke to the media. However, it will only be open for everybody later in 2013. 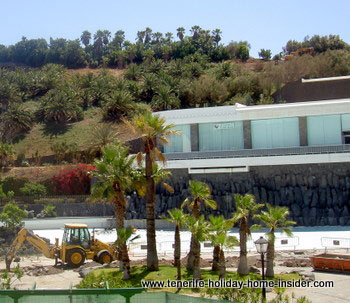 A way to get to Tenerife museums Palmetum

By the way, the above picture is very interesting. It shows, how to get to the  Palmetum by your own risk, though, until its official opening at the end of 2013. Walk up to the depicted building Television Canaria Canal 3 and then alongside it. Channel 3 TV Canaria is at the end of Park Maritim Park Cesar Manrique. The yellow earth working machine in the photo is on the Maritim Park Santa Cruz grounds. This is also how to reach its little Añaza beach off the beaten track below Palmetum Park.

This is about one of Spain's sensations and scientific parks, in fact.

Jardin Botánicoor Botánico Park(Jardín de Aclimatación de La Orotava)
2,5 hectares park built by King Carlos III in 1788
to prove that every tree from southern continents would grow in Tenerife. They did, in fact do so.
Yet, another show peace which serves as one of Tenerife museums was created.

From Tenerife Museums' Palmetum back to Tenerife museums by la Noria.

How the King of Spain attended the inauguration Palmetum Park here