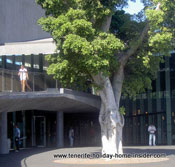 Tenerife museums, such as the art museum T.E.A and the permanent exhibition place the Museo del hombre y de la Naturaleza next to it come as a big surprise.

The T.E.A.'s neighbor is the prototype of a real museum and it's rather different. But that is not all.

How accessories around them enhance

The most interesting about it all is the small radius in which not only those two may be reached, but much more.

This is not known to many people.

So what is its advantage?

You can easily combine visiting the two contrasting exhibition centers of the Santa Cruz capital with attractive sight seeing points.

All are in the immediate neighborhood and all can be enjoyed in one morning.

One day is enough to comb through as many as four most enticing centers of Tenerife museum heritage, while you get more than impressions of the most stunning sight seeing points on the way.

The four most remarkable capital centres of history and art 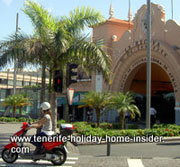 The T.E.A.show center opposite La Recova

Start with the stunning center T.E.A. which is often called Museum Oscar Dominguez! Get to know some of its often changing contemporary art...

The section of T.E.A., where you encounter its shop, is right opposite the new La Recova.

This is the Santa Cruz Market Mercado
de Nuestra Señora de Africa,
as portrayed above.

Museum of Man and Nature

This Santa Cruz center of important heritage whose Spanish name is Museo del Hombre y de la Naturaleza is the only one in the Canary Islands which houses real Guanche mummies. You also see what Vitamin C rich berries were eaten by the aborigines in this most meticulous of Tenerife museums. You discover drawings of their black pigs, their Gofio grain grinders and much more.

By the way, you may also come across a group of school children sitting with a teacher on a Monday afternoon in the museum's patio to study during the peak of summer. I saw this through glass doors in August 2010 when the museum was closed to the public. This is part of the museum's summer camp activities.

Depicted is its street front where you also locate its entrance
which is almost by its convenient electric tram stop. This mansion of natural history, biology and anthropology faces the Gorge of Saints. ( Barranco de los Santos)

Imagine that most deplorable cases of Yellow Fever and worse were taken care of in cramped hospital halls in this same museum mansion. Discover more about this place which represents Tenerife museums of Man and Nature and Guanche bio-anthropoloy, now.

You may get it at the Santa Cruz Titsa bus station information counter. There, a friendly employee may mark all the museums for you on the map. He may even indicate with a red marker how best to get to them.

By the way, the very own museum art and good taste for museum display and outlay is most surprising at the renown archeological Museum of Man and Nature..

Mind that only about 50 meters get you from T.E.A to this center of historical exhibitions.

They should name this short street section by the Barranco de Santas 'Museum road'. It would be most appropriate. 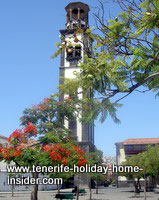 Its elegant tower is the tallest landmark in the nearest vicinity. It belongs to Iglésia Matriz de la Concepción which has some beautiful church art. This oldest of all Santa Cruz churches houses the famous silver cross. It played a big role before the start of the conquest of Tenerife.

This venerable church is opposite the Santos gorge.

Calle Castillo, the most popular Santa Cruz downtown shopping zone starts virtually on the other side of the bridge which leads over the ravine. By the way there, you can also catch the capital's very modern, electric tram which even takes you to the North airport.

Hence, tram rails need crossing to get you to discover more.

What about La Noria opposite the two Tenerife museums ? 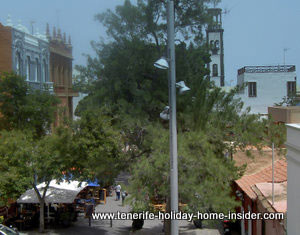 Calle La Noria hardly seems to close its doors ever.

Discover all about a historical street called La Noria... It has restaurants which lead you down memory lane. They are beside Al Capone type bars of former gentleman enclaves, vintage clubs and other contrasting surprise spots. La Noria is the fourth closest must see landmark after the Recova Market and the Barranco de Santos exhibition centers.

Actually, everything, including the Tenerife museums are almost spread out like a living map in front of you when you look down from the Lion bridge. It is exactly how you discover this sight seeing spot Santa Cruz in above picture. The gorge is not depicted on the above image, but is immediately to the right.

Then there is the oldest Santa Cruz Theater of Güimerá.

How get to Teatro Güimerá?

One route goes off Calle la Noria, the swinging street which has been mentioned above. You see its old church bell-tower from the beach front by Avenida de Anaga. This theater by Plaza de Madeira is also by the tram rails which you could cross after the gorge. Another virtual stone throw from our first museums, indeed...

The Teatro Guimera is the handsome building behind the sculpture 'Per Adriano' by Igor Mitoraj. This is one more works of Spain art which stands in the open on a Santa Cruz Tenerife street.

You hardly walk five minutes to arrive from La Noria at the theater.

So much to a short radius, or call it a circle of action packed sight seeing spots and museums by the Santa Cruz Tenerife seaside with its big ferries, cruise ships and leisure boats. Not to forget is the downtown shopping hub with Plaza de Candelaria and the stylish city lake of Plaza de España, close by.

Actually, this is a museum where even kids seem to enjoy themselves, greatly. And, it's all for free.

The most spectacular old sailing boats are seen there. They are miniature reproductions. Plus there are all the things which go with them. They make the hearts of little boys and girls beat faster. Much is related to the capitals encounter with pirates and buccaneers. Of course, a companion is needed to tell all the stories. However, some are on film shows within the museum. 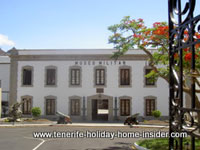 By the way, the main Rambla which runs past the Military Museum of Santa Cruz must have been seen at least, once. However, its most beautiful part which also shows off street art is on top of the hill which it climbs.

The sculpture represents a fallen angel, so they say. I called it the military museum monument
on the corner of the Street Rambla Santa Cruz ( formerly called Rambla de General Franco)
and Ave. Francisco la Roche by the ocean! They say that the sculpture was erected in honor of General Franco, who in fact is the figure behind the winged sculpture. 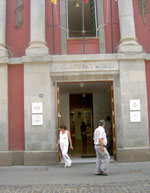 This handsome museum is behind Plaza Principe de Asturias right next to church San Francisco and its adjoining park Principes de Asturia with unconventional sculptures of street art.

The museo de Belas Artes, as it's called in Spanish, has a warm personal, welcoming touch. It is the smallest Santa Cruz show house for fine art but, has the biggest paintings, many of which depict scenes of Tenerife society and not just clerical art. Also, it has interesting shows of foreign works, at times.

No entrance fee is charged. Combine this museum with a short shopping spree by Calle Castillo, the main commercial street.

Sculptures with a new dimension for the Museum of Belas Artes

Notice the nearby sculptures which are named 'Courage' by the renown Dutch artist Hanneke Beaumont. Her street art in the adjoining park of the paintings of Fine arts complements the museum's category. However, there is a unique quality of expressionism in the human size Terracota figures. Their grey attire and complexion, timeless and sexless features cause social reactions, nevertheless.

Discover more unusual museums in Tenerife, some of which are on a seafront, in a little known village, such as the pottery museum or perhaps, one will be added one of these days which is in a cave.

From Tenerife museums back to Tenerife attractions.

Compare to museums that are generally entrance free