Many friendship clubs exist on Tenerife. One of the reasons is that there is so much to love about the biggest of all Canary Islands. 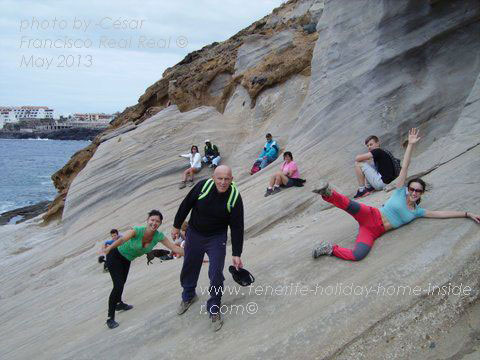 Admire happy international walkers of a Tenerife club where friends are made. The occasion of the great photo shot of the foreigners who had great fun was a trip to the Montaña Amarilla. (Yellow mountain) near el Medano.

Also, the superb, mild climate in Tenerife is ideal for almost all sports clubs for outside activities.

However, other clubs party or perform outside as well.

The most popular clubs in Tenerife since 2010 have been for playing football. These associations have even become attractive for little kids. Even watch a girl soccer match on a Saturday in Puerto de la Cruz. See it at the stadium by the Municipal pools and Castillo San Felipe.

What do they cost?

Membership fees are more or less € 140 a year. No need to live in the same suburb. Training sessions may be as many as 4 a week. Usually the kids get their club t-shirts, such as the black and white one which depicts Escuela club de futbol Antonio Yeoward.

Cosmopolitan friend's to be made everywhere

Many artist belong to the Puerto de la Cruz association that promotes awareness for the environment called Medio ambiente in Spanish. 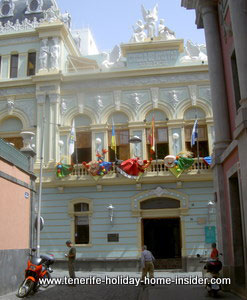 One of most elite clubs for friendship is the Santa Cruz de Tenerife Circulo Amistad-12Enero XII. Discover why this friendship club is so special and restricted...

Bohemian club for friends of writers and poets

Almost opposite the club Circulo de Amistád is the corner Café El Aguila which includes a restaurant, nowadays. The café has existed for almost a century with the reputation of a Tenerife Bohemian club for writers of literature and other arts as well as their fans.

Another famous of clubs for making friends is the main Tenerife carnival club Nifu-Nifa
which is for socializing at night, in fact. Everything important happens after hours in Spain, you know...

Yet, another one which has many supporters is the classic car club of Santa Cruz de Tenerife capital. Mind there are other similar clubs in Tenerife South, such as the Retro club.

Open for all nightclub by Adeje to make special friends

The Faro chill art top Tenerife nightclub is one of most intriguing places for all friends of art, meditation and techno music.

The best establishments for gays in Tenerife are all on the Veronicas Strip in Las Americas. A British gay from London reported that this is where the action is. He also recommended Hotel Playaflor as ideal for sleeping over for one, two or small groups in December 2015. How come? This hotel on the beach has bunk-bed apartments for self catering besides a nudist pool, too.

Other ways to get together

Jazz lovers of Anna Rodriguez and Eliseo Lloreda used to meet every Saturaday night at Hotel Nivaria of La Laguna. This is not a real nightclub but may be seen as one for time being. Other music of a more varied taste is also represented by the live music of the Tenerife artists. More about the La Laguna concert events as well as this section of the first capital of the island and a good hotel for self catering by a romantic town square at Tenerife holidays of romance. 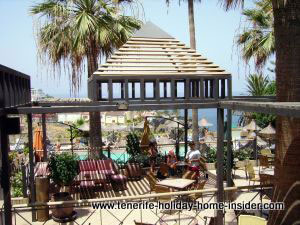 Many ideal friendship clubs are at the Tenerife location of los Gigantes, (giant cliffs) as the locals call it. However, its oldest so called harbor club is a highly popular time share resort with self catering apartments.
Note the harbour club Los Gigantes,
as depicted beside at
Avda. José Gonzalez Forte, 26,
Santiago del Teide -Tenerife
Tel: 0034 + 922 861 146

Both harbour clubs at Los Gigantes Costa Adeje are rather private clubs which are dedicated to English speakers.

However, just about every bar inside the Tenerife yacht harbor of Los Gigantes is a night club in itself. It doesn't commit to anything, except to order a drink, you know... 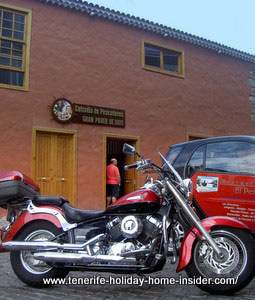 By the way, Tenerife has the most 'Cofradias' of the whole of Spain. That tells much about fishermen friendships. I had heard of the above Puerto Cruz fishermen club, 10 years ago, when the place was rather shabby. A damaged portal was leading down crude stairs into a basement. However, the fish served on simple tables was renown by insiders as delicious. It's been the freshest, you could get in
Tenerife's Puerto de la Cruz, ever since, except after a few days of storm. No designer food but, good local Tenerife cuisine .. Then they started revamping the whole place. It took ages. Now, it has almost become a fishermen museum. There, look up a list of all fish caught in Tenerife as well as fishing gear.

Of course, fishermen guilds in Tenerife and abroad are much more than friendship clubs, you know...

Vampis club of Puerto Cruz of former Avda.Generalisimo which had many friends for decades is not open any more, as depicted beside. No, its management didn't shut for renovation or go to another place.

Click here to check out the Omnibeach Puerto de la Cruz which has ideal functions to make friends by young and old.

The two clubs or circles are for all who understand or would like to improve their German language skills and who are interested in cultural exchange. Top platforms for new friendships...

Amazing is that there is a similar club which has been founded in Berlin by Tenerife and Spain expats in Germany. I don't mean the Internations club association. I will update here, when I remember.

Disco club A Saudade in suburb Buenos Aires
C/Fernando Arozena Quintero, 3, just off TF5 freeway
at the level of Parque la Granja but on the other side of the motorway.
38009 Santa Cruz de Tenerife
+ 0034 922 237 830
Map of A saudade
Closed on Thursdays
web: www.asaudade.es


Two airconditioned music and dance halls are part of its 1800m2 with two terraces. The 'A saudade' serves countless cocktails, has open parking for 1300 cars, is for easy access from Freeways and for wheelchairs. This music discoteque counts as one of most trendy Tenerife club attractions, now. That means one of friendship clubs for Santa Cruz and students of the nearby university town La Laguna...

What about friendschip clubs with Tenerife nightlife in the rest of the island?

'A Saudade' is one of the clubs for Tenerife capital nightlife with disco fun and for making friends. This is besides La Suite of La Noria party street which may be compared with those of Playa de las Americas and Los Christianos, except for Blanco Bar, El Azucar, Omni as well as the Molly Malone for dancing. The latter are on a smaller scale which are listed in Puerto de la Cruz under Bars, while Omnibeach is more of a beach club.

There are many friendship clubs which are not listed here. Even some forums organize parties at night with dancing.

Otherwise, many friends are made at cafés and bars in Tenerife, as hanging out there is part of the Spanish life style, which attracts a foreign holiday home in Tenerife owner just as well.

- From friendship clubs back to Homepage Tenerife holiday home insider. -