The Bohemian club Café El Aguila for literature, poetry and other arts is historically famous in the Tenerife capital, indeed.

However, it took a few centuries and much history for such a club to be possible.

First literature parties had their Tertulias or favorite repeat celebrations at the house of the elite in Tenerife's first capital San Christóbal de la Laguna. There, the palace called Palacio Nava of the Tenerife nobility kept the towns top minds set to peaceful rivalry by poetic ambition. Officially, no Bohemian club would have been permitted there by its members of landowners, government and church. 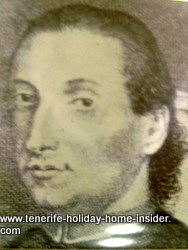 One of its most prominent members was the cleric and famous historian and Poet of Los Realejos. His name was José de Viera y Clavijo. He was born in 1731. He was a key figure for San Christóbal de La Laguna's early literature and poetry celebrations whose 'Tertulia' meetings are still renown now. This son of Tenerife Island was a talented diplomat who also worshiped everything new.

He attracted many foreigners to la Laguna after he had spent time studying sciences in Paris France.

The European and Paris link with Tenerife Bohemians

Mind that literature was a powerful means which connected Tenerife and the Canary Islands with the rest of Europe, as early as XVII and XVIII.

In France, many Bohemians had their own clubs for all kinds of art much earlier. After the beheading of Marie Antoinette in 1793 and the end of Absolutism normal citizens started to congregate freely in their own circles of French Renaissance. However, many a Bohemian club was rather a place for revolutionary ideas. Not only Moliere was welcome there but, also men like Robespierre.

Writing followed fierce discussions in those days, while television talk shows would have been perceived as science fiction. News publications spread new ideas about politics, art, social movements and philosophy.

Printing presses and paper production were fast and good enough by 1845 to print famous French literature to carry overseas. Much of it landed by French ships in Santa Cruz Tenerife Spain.

When Santa Cruz started taking over the rights of capital from La Laguna in 1723 the Tertulia of the literature circle in La Laguna stopped being practical. Slowly, the first Bohemian club came into being much of which is also due to a new trend. This new vogue was all about Coffee culture in public cafés. There, it grew like wildfire. Doors were opened to stimulating, aromatic coffee for innovative Bohemians and liberal spirits.

Other Bohemian clubs of Tenerife

Café Peña seems to have been the first Bohemian club which welcomed normal inhabitants of the Canary Islands and Tenerife. Also Café El Guanche is lovingly remembered by some lovers of literature, poetry and art. Unfortunately, both places only seem to live on in old photos.

The last Tertulia was carried over into century XX at the Café El Aguila from 1920 to 1980.
Its peak times lasted until the outbreak of the Spanish civil war which claimed some of best Spanish artists, while some from Tenerife returned battered, but alive. Find this café with restaurant today very close to Hotel and Plaza de los Principes in downtown Santa Cruz. 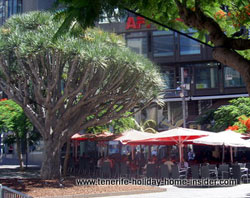 Above all in the past, the Aguila Cafe now called restaurant welcomed virtually everybody of artistic merit and employed different membership prerogatives than the nearby friendship club Circulo de Amistad.

El Aguila meant fun downtown in in the city of Tenerife's biggest port. but it also caused drama to its idealistic Spanish artists. A bohemian club like Café El Aguila would never have tolerated General Franco's radical ideas and brutal actions which now belong to a sad chapter of Tenerife history Santa Cruz.

Now, in 2014, Restaurante El Aguila Restaurant with its outstanding designer as well as Spanish food goes with the times. It still has its doors wide open for Bohemians, with or without literary ambitions. However, it is rather chic for a club for non conformist artists of Tenerife with unconventional life style, while its casual veranda appeals to back packers as well as to the banker or shop owner from Calle Castillo.

This club is also much liked by a Bohemian called Super Martin, a poetry fan and friend of the author of this article. The 'chicharrero' Super Martin of the Tenerife Cabildo hunts for literature at the Santa Cruz flee market on Sunday mornings.

There is a handsome, modern sandstone sculpture outside Café Club Restaurant El Águila.

It represents more than one Chicharrero, hence inhabitants of the Tenerife capital. Venezuelan expats had it made by university artists in Caracas and it was all the way shipped as a token of gratitude to Santa Cruz. 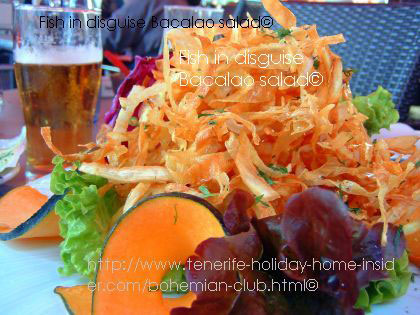 Admire the well presented Bacalao salad which is crunchy fish in disguise. I had it for lunch last time when I was at the renown El Aguila Restaurant and Café. A spicy hidden sauce underneath set my taste buds soaring. I had 'Bien mi Sabe' of Tenerife cuisine which is more for an acquired taste but good, on another occasion. A huge assortment of delicious cakes is also special there.

From Bohemian club back to friendship clubs of all sorts There also find its main organization. Contrary to the club of Bohemians, the foundations of the latter falls into a different era. Then, Tenerife Free Masons had much to say, to judge by exuberant use of Plaster of Paris.

Cultural agenda of la Laguna with literature and more nowadays

Anyone out there who knows the age of the top Bohemian Parisian Club?

Please make a note about it in comments, if you know...

In fact, I wonder if the main Café Quartier Latin Bohemian
club called 'Les deuz Magots' existed at the time of de Viera y Clavijo. It is famous for its poets, stars and prominent Paris movie makers of the French film industry, now. Mind that its location Sain Germain des Prés existed at Clavijo's time, just like Bohemians.