A friendship club in Tenerife of most elite clubs of Spain. 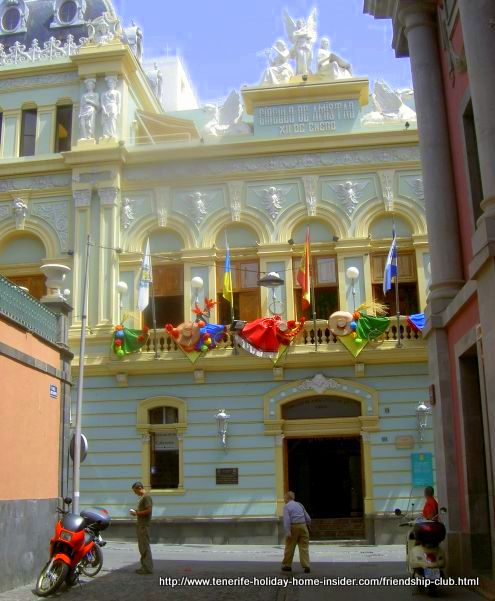 The Friendship club Circulo de Amistad in the capital Santa Cruz of Tenerife with the Museum Bellas Artes on the right.

The friendship club Circulo Amistades XII de Enero with its many floors in Santa Cruz surprises tourists by simply looking at it. Something exciting seems to happen there, always.

What does it hide?

This club or circle of friends has its origins way back in 1855 in different locations, such as Calle La Noria which is the Tenerife party street with several important Tenerife clubs.

This Santa Cruz Tenerife friendship society's exclusivity is emphasized by its green metal plaque outside in Spanish.

Top facts regarding this elite Tenerife club of friendships. 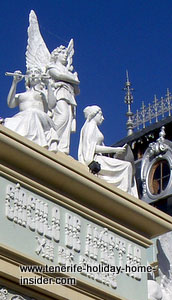 Friendship club with most surprising Spanish architecture in Santa Cruz?

Indeed, it's not Spanish at all but, was built for Tenerife Spain.

You are bound to be drawn to this building by its eclectic style of 2nd empire architecture. Many pillars, turrets and statues make up the front of this mansion. Plaster of Paris helped to mold cornices and countless outside building decorations. Grecian sculptures and pillars seem to carry the first floor of the stately house.

Its Grecian white paint contrasts sharply with the red facade of the opposite museum.

This house with its many European flags is almost a landmark in the middle of Santa Cruz de Tenerife. It's by the capital's most important downtown shopping streets behind Plaza de los Principes with its tiny park and big church Iglesia San Francisco.

You may wonder, how this restricted club named a Circle in Spanish has been able to survive for one and a half centuries. Mind other famous organizations like that of the Free Masons didn't pass the test of time to enter the new Millennium. Their gigantic temple looks like a ruin today which echoes better days.

By the way in the main photo, notice another interesting building next to this most elusive Tenerife meeting place for seeking friends in a higher society.
It's the prestigious museum Museo de las Bellas Artes.

Needless to say is that friendship clubs like the one of the Tenerife capital with its more than 20000 members needs space to accommodate during events. Well, there is the hotel Principe Paz. It is almost opposite the club. Yet, the facade of the popular  Sercotel Hotel Principe Paz looks so humble compared with that of the house of friendships.