This extraordinary man made park of the Tenerife botanical gardens Jardin Botanico of Puerto de la Cruz is one of top attractions of the Canary Islands, of Tenerife and of Spain.

Alice in wonderland in a tropical rain forest comes to mind there quite easily, as long as you visit on a hot day in summer when the light of noon plays in its favor. 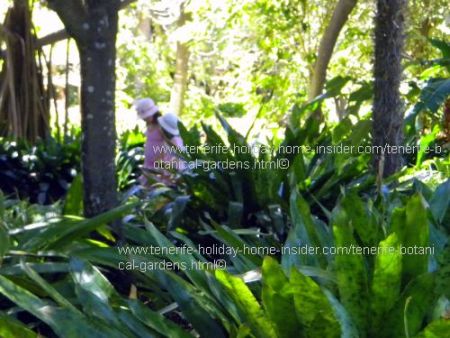 Tropical rain forest mood
Dabbled light filters through tall tree tops in some of the many nooks of this wonderful enclosure.

The size of this Puerto Cruz trophy to be tripled

Kilometers of high walls that are built with natural stones as well as some huge iron doors hide a very special park when you take the TF5 exit 32 for La Paz Jardin Botanico. 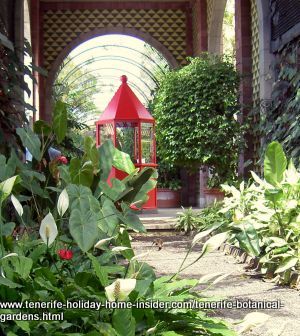 Ticket kiosk entrance
It will soon help to draw even more than 200000 visitors per year. The little red roofed ticket kiosk by the old botanic park entrance may become small then.

A much needed wheel chair entrance and more?

Such option will be possible soon. Indeed, this extention of the park with a 14000m2 reception complex will make a huge difference. That's also for a media centre with educational and souvenir shopping facilities. Best of all will be a restaurant with a terrace to sit outside. Novelty plants will fill the remaining 26000m2 besides the existing 20000m2 gardens. Only some technical as well as administration issues have still to be solved. Any time after Spring 2016 onward should bring the long expected inauguration of the perfected Tenerife botanical gardens that are fit for the new Millennium and for better environmental education.

Absolutely. The park must evolve and new species are to be added to the 39 species of selected show flora with trees and plants from all corners of the global wind rose. A seed bank with 37000 germoplasm species and intense research of endemic Canary Island flora is part of the pride of the park's director.

Tropical and subtropical Bromeliads and Tilandsias 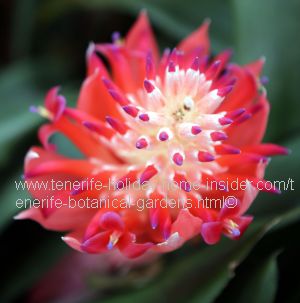 Bees and other forest insects drink from them or bath in them. By the way, our best known Bromeliad is the commercial pineapple which prefers full sunshine contrary to all others.

My personal favorite was always the Guzmania Bromeliad which I even managed to grow on trees. 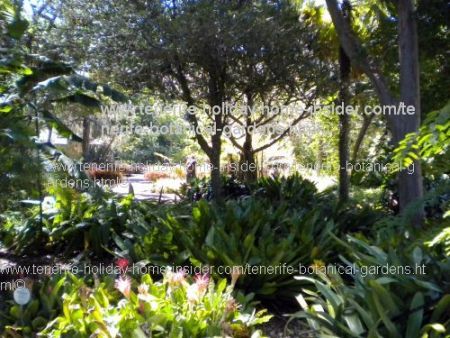 However, much had to be accommodated close to each other on a rather small scale.

That's one reason why everything had to be placed in skillful order unlike in the wilderness. 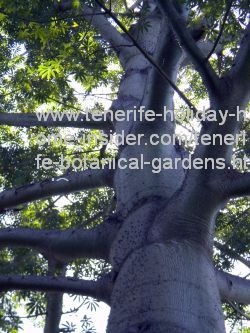 Kapok tree
Yet the mood of the casual ways of Amazonian nature always prevails.

Huge beds of Philodendrons and ferns follow the Monocot flowering species. They store water with a musty smell in flower chalices on the ground or in the air.

Agapanthus however grow in stronger light, where a Pandanus palm by crossing pathways offers its seed heads to the sun. 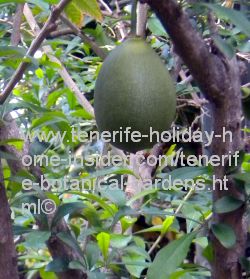 The medicinal giant Kapok tree Ceiba Petandra the plant king of the Amazon eventually towers over its neighborhood.

It may reach 200 feet (about 70m)in its warmer original habitat.

Kapok which is rougher than cotton is good for upholstery, such as sofas or mattresses.

The Andean spirits of the Amazon

Then there is the Andean spirit of this black Kapok tree with the bushy green canopy that communicates high up with the winds.

This Ceiba may talk to you when all is very quiet on special days.

The park depicts them side by side. 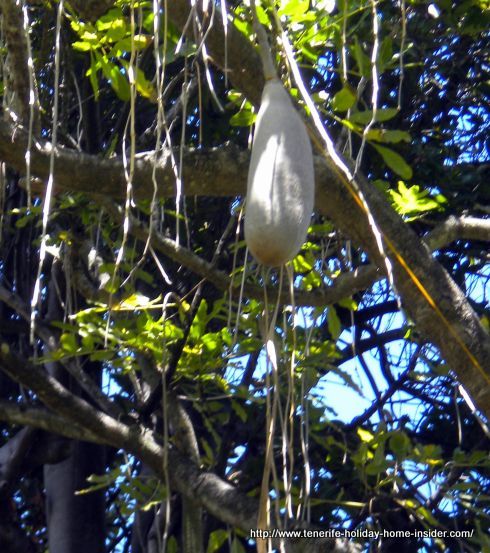 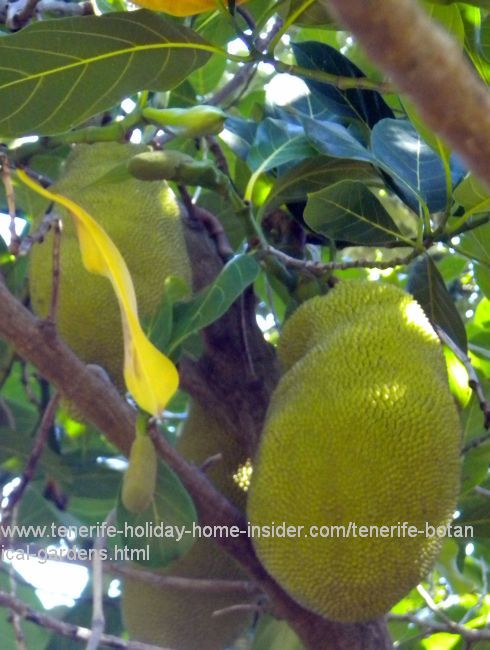 Bread tree with jack fruit
The rather small Crescencia cujete tree with its sweet Amazon Totumo fruit has seeds used for craftworks of colorful ear rings.

How can those trees survive without Amazon waters? 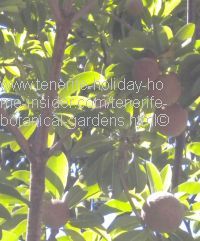 They don't need the flooding of the world's widest river. In Tenerife, they have the legendary trade winds, Their mists make up for it, above all in the Orotava Valley with Puerto de la Cruz.

What about the Amazon Chicle tree?

This so called Manilkara Zapota of the land of some unknown Indian tribes has roundish fruit which look like medium sized Mangoes by the end of Tenerife September. The Aztecs and Mayans made chewing gum from it. It grows to about 15m with its glossy green leaves like most of the Botanico's trees but there is little that sets it apart from others by appearance alone.

Why a melting pot?

Well, its flora from several continents and nations mingle happily.

More tropical fruit and other trees

The tropical tree variety at the Gardens of acclimatization of Puerto de la Cruz Tenerife are breath taking. A Old man's beard plant  of a staggering 8 to 12 meter length at the entrance of the park is one rarity that is mind bogging. 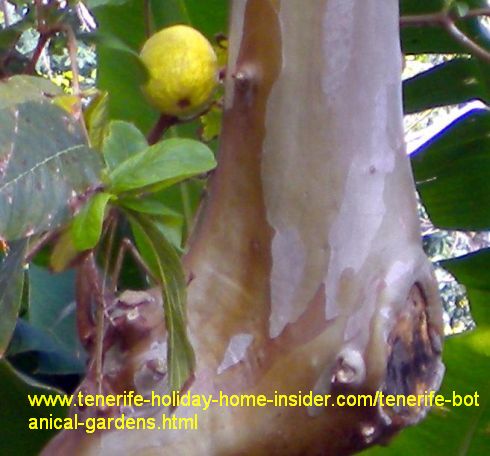 Clematis Vitalba trailing down a tree

Also note the typical attractive surface of the Guava tree besides its fruit that is also loved by bats. 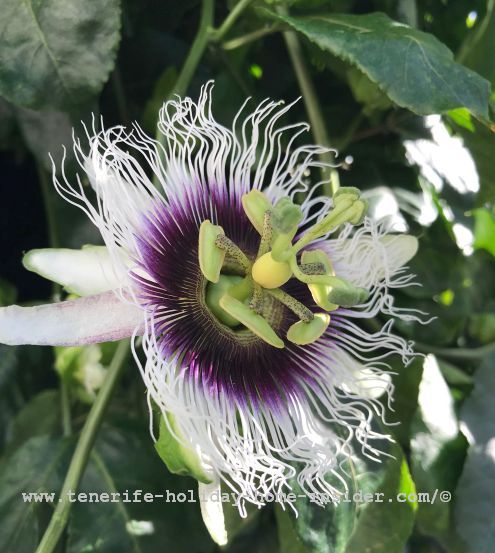 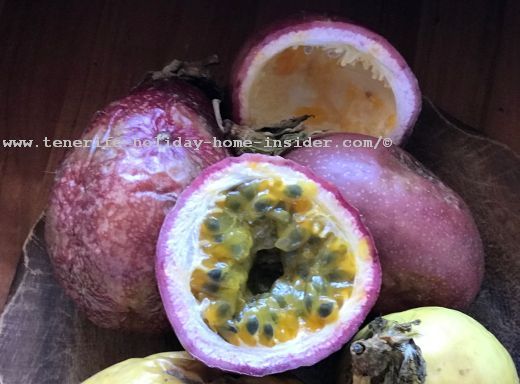 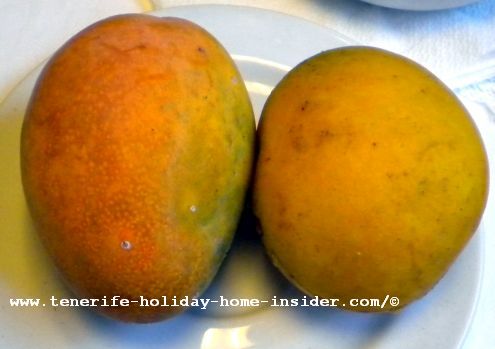 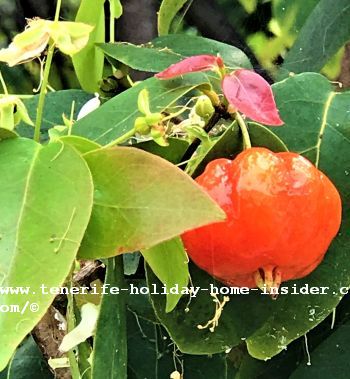 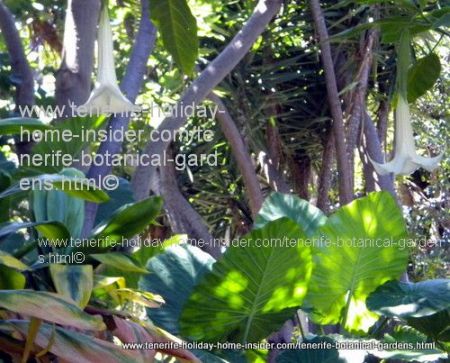 The botanic name is Brugmansias. Their big white bell shaped blooms light up tropical undergrowth in more than one corner of the gardens opposite the big mall La Cupola of La Paz Puerto de la Cruz. Brugmansias also originate from the jungles of the Amazonian tropics. 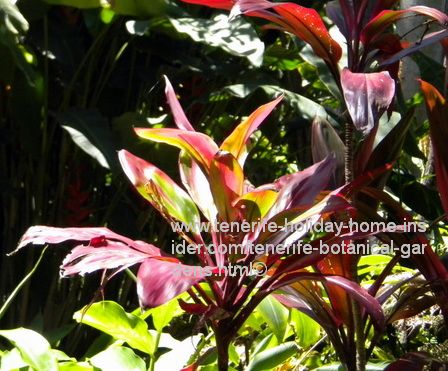