Why Tenerife Bananas are fortunate crops

You see Tenerife Bananas that grow galore in the open near the sea in the Orotava Valley.  However in the South, they are kept usually under canopies or in tents. 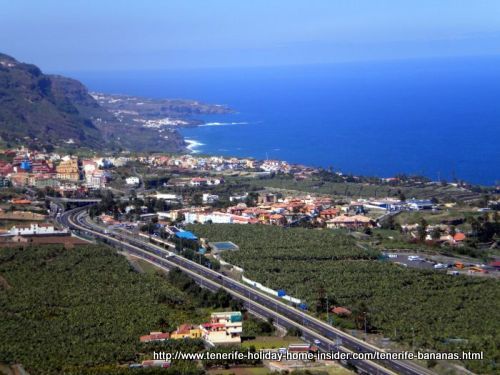 Tenerife Bananas i.e.Platanos with fields galore for miles by the TF5

Depicted are Bananas that grow in Los Realejos. Not shown are those in the Middle of Puerto de la Cruz as well as by Loro Park opposite the Garden Beach Playa Jardin and beyond. 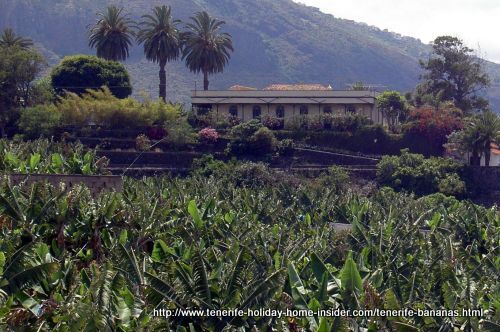 Portrayed are plants of Platanos de Canarias in their plantations by residential areas of Los Portreros of Toscal Longuera of Los Realejos. 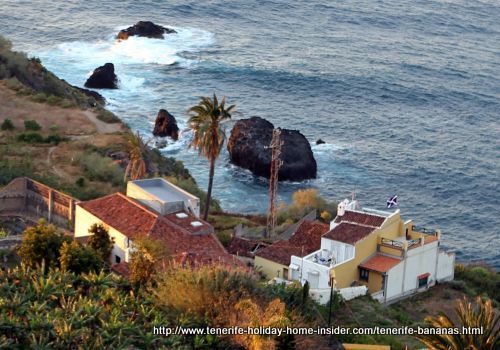 Banana trees by the sea

Discover a picturesque setting of Banana "trees" by the sea. It's at El Guindaste where the plants grow wall to wall along the entire bay.  Indeed, they are not trees, but belong botanically to herbal plants.

Where else encounter Bananas outside Los Realejos and Puerto de La Cruz? 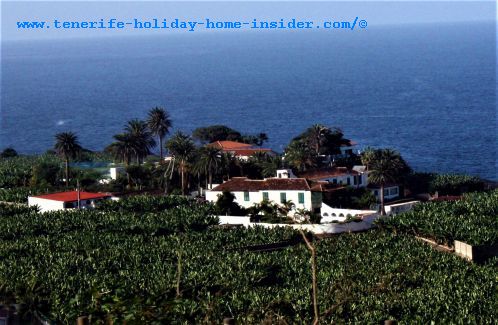 One of many El Guincho Garachico Banana plantations of enormous size in the open by the Atlantic ocean. Stately homes with well-kept chapels are the norm on such estates.

Find them all along the Northwest coast of Tenerife past Santo Domingo, Icod de Los Vinos and Garachico right down to Buenavista del Norte in Westerly direction and Tacoronte as well as Tegueste further to the Northeast. They rarely thrive in altitudes beyond 250m above the sea. Mind that Los Silos Platanos grow rather under tents to protect them from wind and excessive moisture.

When an exception confirms the rule

Below make out almost ripe Banana i.e. Platano fruit of the Abyssinian i-e Ethiopian variety that are still attached at a rare altitude of about 400 meters above the sea. The fluorescence that's portrayed separately on the right is still attached and didn't fall off as yet. Also note the stunning red stripes in the center of the leaves of this North African Banana species. 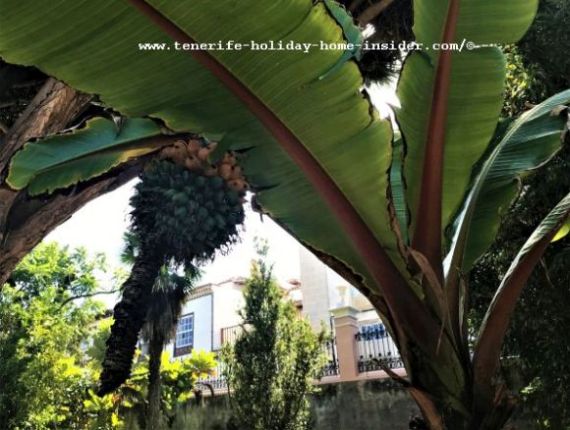 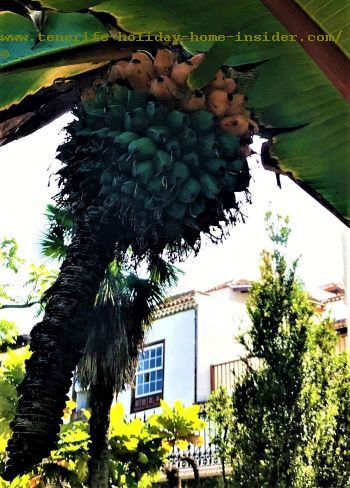 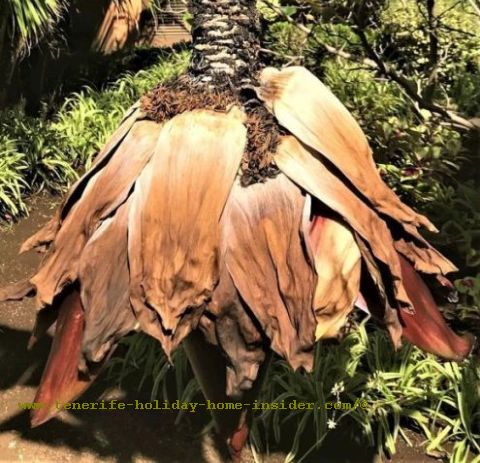 The Platanos de Canarias were first introduced on the island at the end of the nineteenth century. Then,  sugar cane stopped being commercially viable there.

Portuguese ships brought the Banana plants over from nearby Cabo Verde where they had been imported from the Far East.

History of the Banana export to the North of Europe

It all started with Puerto de la Cruz tourism. Puerto's steam ships didn't only bring German health tourists back to Hamburg. They also carried tons of the yellow tropical fruit the Platano. That was after Hotel Taoro of the oldest Tenerife resort had become the craze of Spain's first Spa.

Shipments of Tenerife Bananas to England and Ireland were handled from 1895 onward by the Forwarders Elder Dempster and Co.Ltd in steam ships. 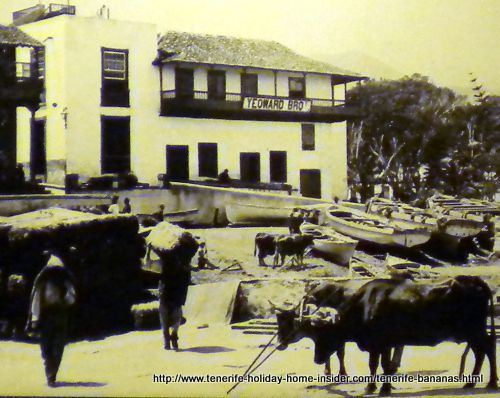 By 1910,  the Puerto de la Cruz Company of Yeoward Brothers founded their own shipping line and stopped using the forwarders Elder Dempster.

The Yeowards became pioneers for London and Liverpool with their Banana cruises for both tourists and the island's Platanos de Canarias. They were even growing the crop themselves in the Orotava Valley.

May be they used a location like the most stunning Banana bay in Tenerife which is by Rambla del Mar and San Pedro. 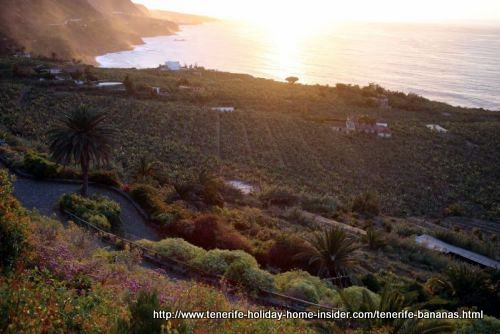 The fate of the Banana ships of the skilled Yeoward brothers

The brothers became successful traders after long struggles and much determination.

Mind, even good ventilation and temperature control was important. Besides, all Platano Musa species could not be transported together with Citrus fruit like oranges in the same holds, as Citrus gives off gas that is lethal to the Musa crops. The Tenerife holiday home insider was told so by a ship's captain in Google Plus. He once lost an entire Banana shipment by such gas.

However, the Yeoward brothers could avoid such accidents. Unfortunately however, several of their 'Banana' fruit carriers were torpedoed by German submarines during WW1 and WW2, eventually.  Other problems were boycotts, trade embargo and the Spanish Civil war.

The Golden age of the Banana

Shipping to the North of Europe only started to boom in the so called Golden Banana era between 1950 and 1975. An international outbreak of the so called Banana Panama disease that also affected the Cavendish species in the Canary Islands  was one of the reasons besides the end of WW2.

6 Reasons why Tenerife Bananas are fortunate

They cause Black Sigatoka known as Sigatoka Negra in Spanish. The fungus of the Sigatoka lives in the soil. It renders leaves black and prevents photo synthesis. This Banana disease started to cause world havoc in 1963. By the way, this is why you don't find Bananas in  nurseries or botanical gardens. Once the disease is in the soil it damages vegetable produce and other plants. Only pain staking fumigation gets rid of the pest. This isn't commercially viable. 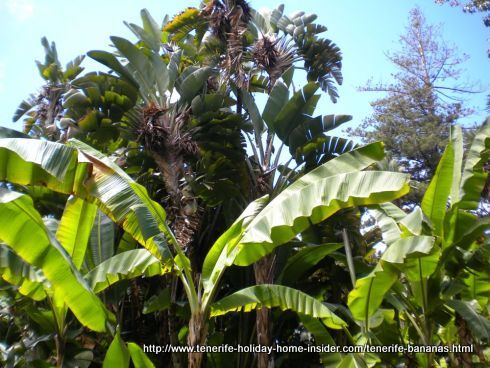 At the beginning of April 2016, I spotted the above portrayed Banana plants in the famous Botanical Gardens in La Paz of Tenerife Island. The light green  plants look exactly like the ones that produce finger Bananas in Southern Africa.

However, nobody I know ever saw them with any fruit in this oasis of the northern suburb of Puerto de la Cruz.

Also mind the cluster of the dark, giant Strelitzia Nicolai behind. It seems to be almost  eight meters tall, while Finger Banana "Trees" easily grow up to 5 or even 6 meters. The normal commercial types reach about 3 meters.

Strelitzias produce flowers only contrary to bananas. An outstanding specimen depicted below shows the development of fruit. This was captured at the 5 Star hotel Botanico of Puerto de la Cruz. 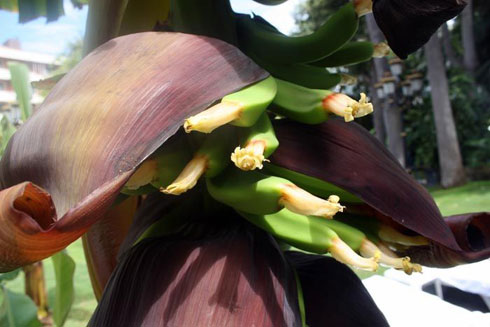 Conclusion for a world unique banana

They are resistant to banana disease, are delicious and full of important nutrients, such as potassium. Also, they can be eaten raw.

Other amazing facts and news 2016 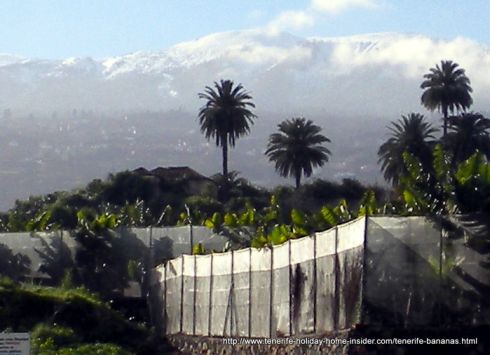 Depicted is a Tenerife 'platanos' (Banana) plantation in Calle Mississippi in Los Portreros of Toscal Longuera. Notice the snow on the mountains on the horizon. The photo was taken in March 2016. More fell at the beginning of April, while the Bananas on this farm profited from more rain. This is rather normal for December and January or, by the latest February.

Times have changed and all Pesticides are looked down upon. Also Tenerife will have a hard time to keep pests at bay in years to come, as rising global temperatures also occur on the fortunate, biggest Canary Island. New ways are found such as by Microbes to fight all kinds of Banana disease but,  are problematic. Indeed, pests also adapt to just about all new conditions and enemies. Hence, the future of the yellow or say golden crop shall bring new challenges.

From Tenerife Bananas back to Tenerife attractions

About the banana disease in Spanish Kindly translate online...