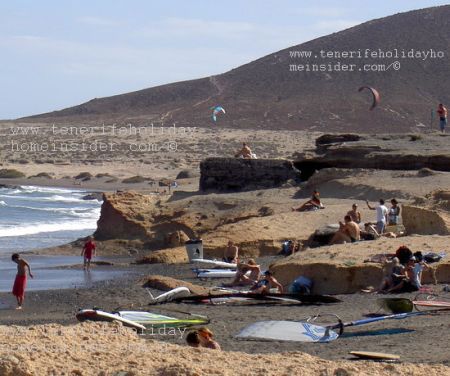 Notice the unusual beach geology at El Medano Tenerife...   There, rocky plates form irregular shapes and mimic jumbled up terraces which resemble yellow sandstone in some of the tidal reach of waves. This structure of such ground sometimes looks like layers of puff pastry.

I found the sight of it utterly unusual, beautiful and fascinating.

What I didn't know is that some of it is due to erosion where sand mining on this coast in the Sixties of the XIX century made matters worse.

At the same time, Banana and Tomato plantations also became issues with the sensitive seashore.

A beach cave for shelter? 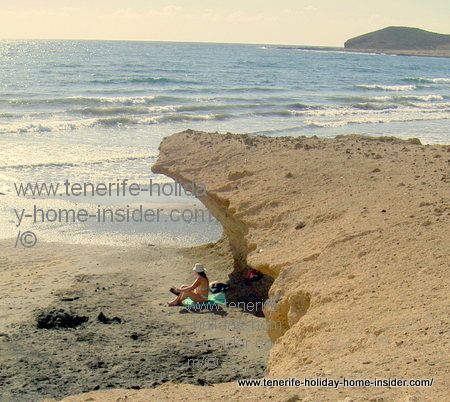 Beach Cave El Medano Tenerife.
It's unlikely, as the wind comes from the sea and sun can still enter under the pumice rock that nature's demons hollowed out slightly. A little more privacy, indeed...

Those generally rather light rocks are pyroclastic pumice. They also contain a bit of hard basalt and some typical minerals, such as trachite and magnetite. The color of those slabs match the almost golden beach sand the inorganic jable from the ocean. 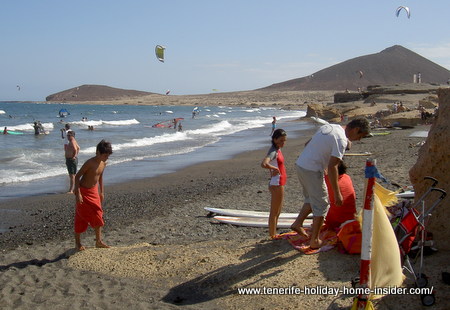 Orange beach accents with yellow jable.
The combined shades of yellow set off the deep blue of ocean and sky. Often, orange colored beachwear adds magic accents in such landscape.

Looks are not good enough

Sometimes, the pleasant looking, large pumice surfaces leave little space for soft ground to walk on by the edge of the ocean. 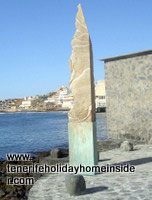 Notice a most amazing Tenerife sculpture which looks like made of light yellow pumice stone...

It complements the geology of all the beaches of El Medano. Discover this obelisk by Playa Chica where it faces its magnificent bay.

Flat rocky outcrops offer nooks for hiding or for more privacy for the sunbathers in some rare spots. They create a few tiny beaches.

Miniature beaches between rocks at El Medano.
Often small caves are part of them. These hollowed out crevices may have been shaped by the power of incoming ocean waves. Indeed, the Atlantic leaves its marks to the geology of this Southern Tenerife beach during the course of the year.

By the way, there hasn't been any history of accidents due to geological hazards during El Medano's frequent international windsurf and kite surfing championships since 1996.

Montaña Roja which is indeed a red mountain of reddish rocks as well as nearby mountain Montaña Pelada are other phenomena of Tenerife volcanology which created exceptional geographic landscapes by El Medano. The symmetrically shaped central volcano of the red Mountain of 171 meters of altitude crowns the bay on one side and almost separates the main Medano beach Playa Grande from the unofficial naturist beach Playa de la Tejita.

Montana Roja is a stratovolcano the cone of which consists of lava and big parts of reddish pyroclastic rocks.

Walk to the end of el Medano beaches to the foot of this mountain.

There, the 100m x 10m beach at the very end that's closest by the red mountain has even more rare geological surprises.
How?
The ground is dotted with tubular low round fossils. Geologists affirm that they are of biological origin during fairly strong earthquakes with volcanic eruptions, 10 000 years ago. Then hot volcanic action met with cool seawater which caused fossilization. Sometimes, a miniature tree is growing out of them. 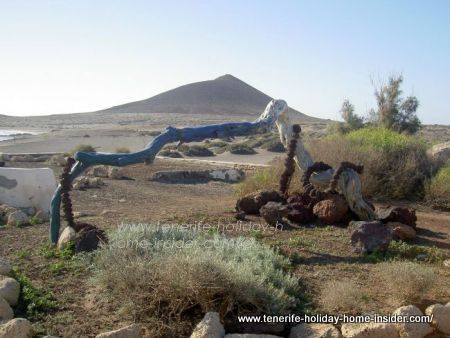 Endemic Tenerife Flora environmental management success.
In fact, Jacob Doñate González who is environmental consultant for Granadilla de Abona stressed the importance of the geological assets by El Medano. Every little detail will now be added to the region's geological data archive, as it presents great value for Tenerife nature and biodiversity. This has been proudly reported by the Spanish and Canary Islands Media as well as by television. All this is also part of a dune and wetland recovery management program which was started in 1995, last century.

Hope for the return of healthy environmental natural evolution

By 2014, substantial success could be noticed by the recovered growth of endemic Tenerife vegetation on the immense dune sands (los medanos) by Playa Grande the Lecadio Machado beach. Wetlands are also expected to establish themselves again on a larger scale slowly when ocean water filters into the inorganic dune soil during high tides.

More about it by a link on the bottom of this page. 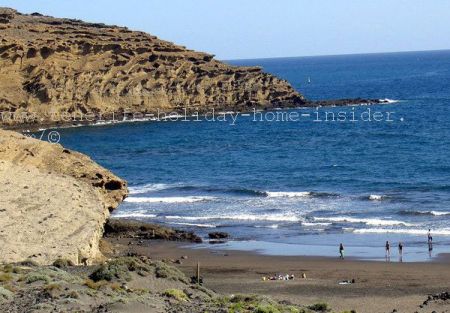 Montana Pelada Tenerife
Tenerife Montana Pelada that you reach going past La Jaquita beach by a 10 minute drive. Mostly pebbles and gravel beach of about 100m with its little sand shore depending on the seasons. This mountain is also of hydrovolcanical origin and is a monument in its own right.

You are bound to think of the Mid-Atlantic rift when you hear of underwater plates of the Atlantic. Well, many geolocical changes are still deriving from them and affect all countries in this geographically sensitive zone which includes Macaronesia. Above all seaside locations are proof of them.

I have seen a drastically shifted shoreline after a Portugal earthquake in the Algarve, 51 years ago.

Of course, there are also hidden geological formations in caves as well as in the ocean which don't meet the immediate eye.

Indeed, Tenerife more of which look up here is no ordinary island of Macaronesia.

Geologically rare Tenerife nature wonders which rise out of the ocean

From geology back to home

Have your say about what you just read! Leave me a new comment in the box below.