Natural wonders off the beaten track on Tenerife Island. 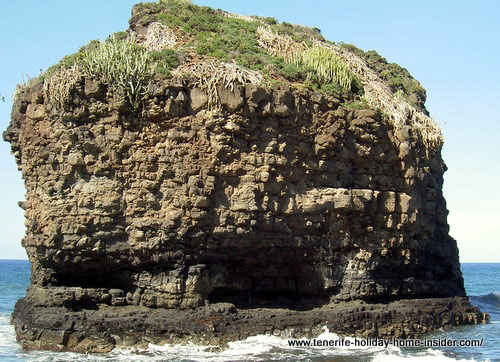 Discover top natural wonders, as depicted by the photo beside... There, the most amazing vegetation grows on a lone volcanic rock in the middle of Atlantic waters... The almost round enormous mount of stone is a natural phenomena on its own.

Where is this jewel of nature?

This natural miracle is at beach Los Roques
by Puerto de la Cruz just below two hotels Tenerife of Los Realejos. One is Hotel Maritim Tenerife and the other is Hotel Los Roques. Both are overlooking the beach Playa Los Roques.

Only birds and seagulls have access to its top.

Indeed, they are responsible for the mount's creation of plants of paradise. 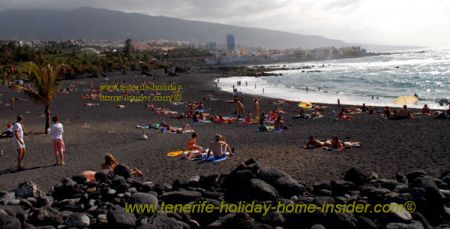 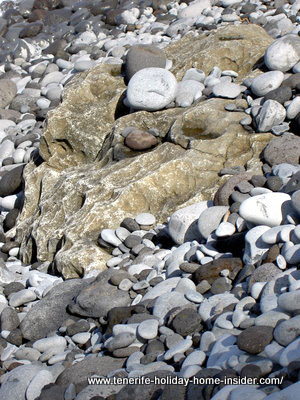 The picture above is another example of nature's best result, so to speak, by the same seaside. This stunning Tenerife beach landscape was created by nature. The retaining walls were added later. This landscape looks as unspoiled and perfect as fairy tale country. Trace some fortunate
tourists in the enlarged photo... Indeed, this is a prime example for unusual walking in Tenerife.

Admire the amazing beach pebbles which are of such perfect beauty as if made by machines for stunning landscaping... Most are oval and black or white. Many are about 15 to 20 cm long.

One of most natural wonders worldwide 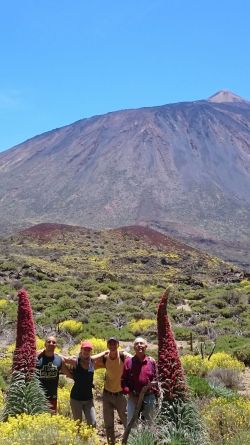 Most wondrous are not even animals like the Mufflon on Tenerife. Rocks, such as those of Garcia,  trees and not even Mount Teide are the most fabulous peaks but we shall come to this just now.

Tenerife doesn't only have the most peculiar geological formations above soil and in the ocean, such as by beach Playa de los Roques. It also has weird tubular fossil relics which are part of wondrous geology, created by an earthqake by El Medano beaches, long ago, while the earth by the seashore has a strange, but beautiful composition. Montaña Amarilla near the Reina Sofa airport is a volcanic miracle.

And then, there's Tenerife's Dragon tree, such as the one of Los Realejos, which is such a unique wonder of biology that its  venerable age can testify to it. However, it's the Draco Millenario of Icod de los Vinos which steels the show by claiming an age of a 1000 years. That specimen has also become a national icon of Tenerife Island, while similar plants like the ones in Sicotra are not the same. Not even the Dragon tree of Gran Canaria could be called an  identical twin of any on Tenerife Island. But experts only discovered that in our new millenium.

Not to forget are the wonderful Canadas del Teide with all their spring splendor where the red Tajinaste is without doubt one of most natural surprises worldwide.

From natural wonders back to Tenerife apartment which is located in this fabulous country of nature reserves and coastal romance.