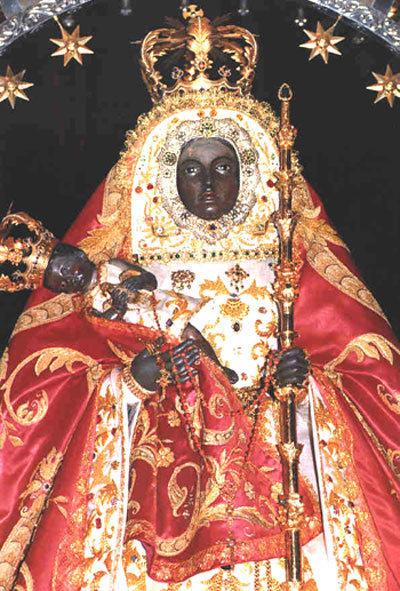 Black Madonna of Candelaria with her child baby Jesus in the left and the world scepter in her right hand. The latter is said to have been a green candle originally.

There is many a black Madonna in the world. They appear in many religions of ancient
civilizations, in all sorts of continents and cultures as well as in various millenniums. The Madonna, as mother figure and goddess was already worshiped, 30000 years ago, before patriarchy came about.

This was already the case with the Sumerians as well as with the long forgotten Indis of Northeast India. Babylon, Egypt and many other ancient civilizations followed suite. Even a pope, recognized a black Madonna off lately. You may just wonder very much what all this has to do with Christianity. You may ask where the missing link is with so many black Madonnas, indeed.

Talk to most Tenerife Hindus about the Madonna of Candelaria... They seem to be very fond of her. Would they see Kali in her? Kali is the fearful, dark Indian goddess with motherly compassion. They may even associate her with India's Shiva deity.

Mind there are black Madonnas that are associated with aboriginal deities in five Latin American countries alone. Important is also one in the Philippines which once was a Spanish colony.

Lithurgical Catholic Dia de Candelaria in February and in August

Mind that Dia de Candelaria in August of the Tenerife Patroness the Black Madonna is also Assumption day (Asención in Spanish)when the Madonna was made to rise to Heaven. Both celebrations on the same day are Public holidays in Spain and in Tenerife. Thousands attend the August festival when pilgrims come from all Canary Islands. The same with less numbers in February, as has been tradition with Guanches, already more than 400 years ago.

By the way, the traditional, nocturnal candle procession takes place at 19.30 through Candelaria streets on the first of February and ends at the Basilica. 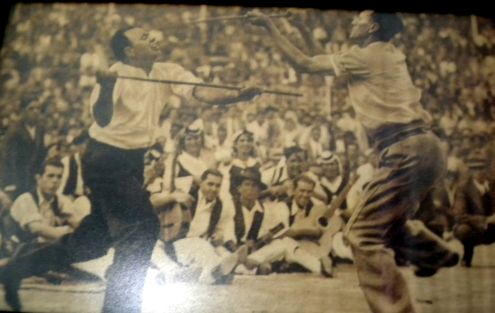 The Black Virgin and the Guanches

A few stories about a black Virgin of Candelaria of Chinech (Tenerife) are going around. However, I am inclined to give preference to that of a prominent man with the Guanche name Benchomo. He leaves us the following insight in the century XXI. He does it in a highly interesting report about monuments and places of worship by the Guanches. The locations are all of architectural, astrological as well as historical importance.

It was Brother Fray Alonso de Espinosa, a monk,  who wrote down a legend about the black Madonna of Candelaria, approximately one hundred years after Tenerife's conquest by the Adelantado de Lugo in 1496. The cleric's version is about a Madonna who was found on the beach of Chivisaya (Chimisay) (beach playa el Socorro) by the Barranco Chinguaro in today's municipality of Guimar. This is also near the cave of the Guanche Añaterve by today's suburb Igueste of Candelaria.

However, the verbally told legend of the black Madonna de Candelaria of Tenerife goes back to 1392 exactly. Indeed, the Guanches could count years. They had a calendar similar to ours and were counting 12 new moons to a year.

That story tells that Guanche fishermen saw a black woman with a child in her arms, who walked on ocean waves in that year. They felt blinded for an instant but, found a black statue on the beach straight afterwards. It looked just like the apparition.

The goat keepers took the sculpture to the holy cave of Maguadas and Kankus (Guanche nuns and helpers) This big, rocky shelter was called like the beach of Igueste Beach Achbinico which is known today as Cave Cueva San Blas. The Madonna statue had been found in its vicinity. 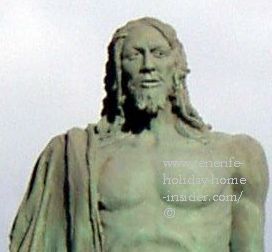 There are more miracle tales connected to the decision of the chief. The stories were of a similar nature,  as those told by the shepherds.

A chapel was built for the black virgin of Candelaria by the Roman Catholic church. However there,  the statue was destroyed by a storm and or fire.

What makes everything so confusing is that almost all Guanche caves on Chinech (Tenerife)in connection with the Madonna sculpture were convent caves. Many of them existed on the whole island. The deity Chaxiraxi  was most prominent for all of them, always.

Otherwise, Guanche residential cave culture was typical for Tenerife and the Canary Islands.

The 3000 year old cave Cueva Chinguaro was one of the most spectacular caves of Tenerife. There,  a permanent fire illuminated the black Madonna at all times and may have darkened her face more. At that time, she was still taken for the Guanche idol Chaxiraxi which was more than a  Macaronesian fertility goddess.   So around 1996,  this cave which is at 3 km from cave Chivisaya or its beach became a socio political project. This undertaking was headed by an archbishop in cooperation with the Canary Islands government as well as with the Cabildo of Tenerife and the town  hall of Candelaria.

Transformation of the Cave Chinguaro became a big and also a somewhat controversial project during the last decade of century XX.

By the way, a reproduction of the black virgin by the renown sculptor Fernando Estévez was done in 1830 and is inside the Candelaria Basilica. Another is in the cave of San Blas. Both sculptures hold a child in one arm and an olive colored candle in the other.

Both periods are verified in calligraphy on a wall inside the Cathedral of Candelaria. 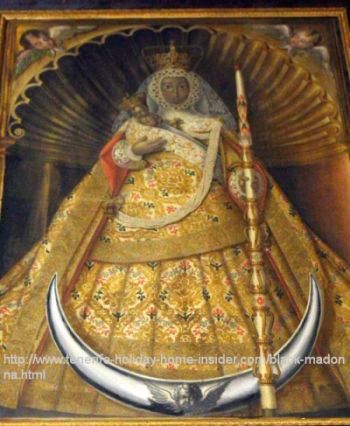 By the way, the Madonna of Candelaria isn't always clad in the same red outfit as above, as displayed at Iglesia del Convento Santo Domingo which is an Orotava Monastery church.

Most important attraction for Canarias

The 'Virgen de Candelaria', as is her Spanish name, is the crowned  Catholic patron queen of not only her town, but  Tenerife and the whole archipelago of the Canary Islands and this makes the Madonna of Candelaria  of one of most one of most attractive Tenerife tourist highlights for all Canary people, without doubt.

The Black Madonna mustn't get whet

One of my native neighbors once told me how disappointed her family is when the procession with the black virgin the black Madonna doesn't take place.

She said that this happens when the ocean by Candelaria of Tenerife is bad. Then, it may whet the Madonna statue, as it's always carried  along the seashore.

She also added that it occurs less during the August ceremonies. However then,  the streets are too crowded for her liking, compared to February. The fact that the ocean might so sadly spoil the virgin's procession made me realize how important the spiritual journey or pilgrimage to Candelaria is for Tinerfeños. That's hardly any business operates on that day in all Canary islands. My neighbor travels from Los Realejos to Santa Cruz, parks her car there and continues by bus to get to the virgin's street promenade. She also pointed out that people like her were not following any dress code for those festivals, contrary to the important people, as she called politicians and clergy.
Good reasons why to stop at Candelaria Tenerife on your way to the north of the island.

A university study why Madonnas may be black.