Kitesurfing Tenerife is popular and growing - Know where to surf... 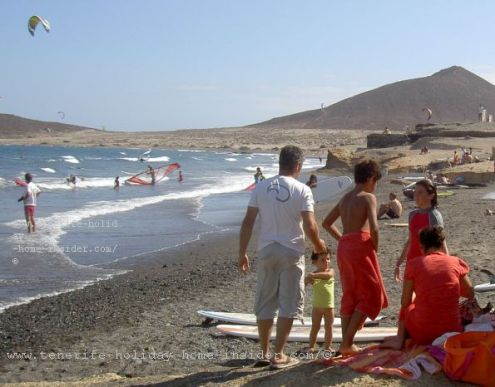 Kitesurfing Tenerife el Medano doesn't seem to be totally up to spec to judge by the picture, depicted above. Winds from the Atlantic ocean seem to have blown some kite surfers too much inland. To be seen better in the photo below...

However, the picture is deceiving. All is OK, as kite surfers in this region are the best.

The PWA El Medano Wind and kite surfing World Cup took place from August 05 to August 011 in 2019. More about it under past events

This will be from February 29 to March 06 of 2020. It looks like a stone throw on a sea map from El Medano to Cape Verde but there are no direct flights between Tenerife and the island down South. The strapless free style will also be part of this tournament. Twin tip rider top champions will display their skills and showmanship.

Get into mood for this water sport?

The school kitecenter-medano teaches on the adjacent beach La Tejita which they consider more easy for beginners.

This location of Playa del Cabezo which is almost at the very end of the Medano beaches below Montaña Roja is also where the last world windsurfing championships took place in July 2011 which has been a repeat after 1996.

Registration for Kitesurfing Tenerife could be done at www.prokitetour.com. The kiteboarding/kitesurfing tournaments took place in El Medano at the same time like those of windsurfing. The price of registration was €105 and €25 for late booking in 2011.

By the way, preferred winds by El Medano surfers are northeasterly Elysian winds.

The kitesurfers seem to be gliding high up in the air in a region of el Medano Montaña Roja. Getting too close to it is to be avoided for kitesurfing-tenerife. 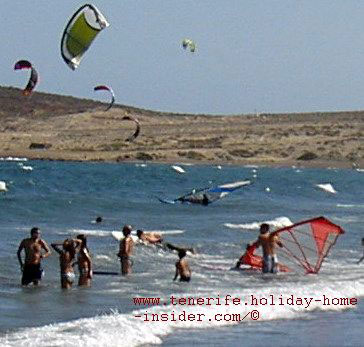 Experts say that the nearby beaches of El Cabezo below Hotel Playa Sur at the end of the timber boardwalk just before Montaña Roja is best suited for professional kitesurfing Tenerife, as there is more sandy terrain for launching a kite, while wind and waves are best

Contrary to beach Playa del Cabezo find the main beach of El Medano just before it. It's also called Playa Grande and it is much more suited to learn windsurfing. Gather more Tenerife windsurf knowledge about wind strength and wave velocity for surfers as well as about surf equipment and some of its history which includes power boards.

There, also find kitesurfing
Tenerife classes, get almost on the spot assistance for trouble with surfing equipment and hire surf boards.

Get the help by driving to the back of the following two hotels in street C/ Gaviota which runs parallel to the seafront.

Then, there is also the OTC Official Test Centre for surfers.

Please note: there is no tuition for beginners at El Medano, to the best of my knowledge.

It's nice that plenty beach resources have sprung up by el Medano in the last years. There are showers, toilettes called aseos in Spanish, change rooms and snack bars to drench a thirst or meet up with surf buddies. 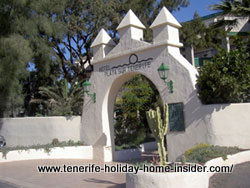 You walk out of the portal which is depicted and are on the pretty sandy beach within a few meters. The kitesurf center is right there, albeit not visible from the resort entrance. Taxis most probably take you to the hotel's street entrance which is on the other side.

I spoke to a thirty something German tourist. He had just arrived with a Combi van which he had parked near the entrance. He told me that he is a frequent visitor of Hotel Playa Sur. He was full of praise for it. He also recommended its surf center. 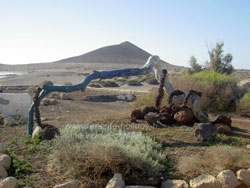 There was this stunning driftwood landscaping feature very close to the kitesurfing Tenerife beach center.

It almost looked like a barrier which is asking not to trespass. Let me know if you can still see it when you get there.

Then, there is also the OTC Official Test Center for surfers.

It's nice to notice that plenty beach resources have sprung up by el Medano in the last years. There are showers, toilets called aseos in Spanish, change rooms and snack bars to drench a thirst or meet up with surf buddies.

Help for kitesurfing ailments or injuries

I even saw a yoga and physio therapy studio by the timber boardwalk not far from the main town square Plaza del Principe.

Some surfers should be happy to know that there is a first aid assistance as well as a tall wooden beach watchtower, which may only be manned during extreme weather. I didn't see anybody inside when I passed, you know...

The nearest Government Medical Center Centro de Salud for accident emergencies is in San Isidro at about 7 km from the Medano beaches.

You must call any travel insurance emergency number first to find out if you are allowed to check in there or in another place.

Ask your surfing buddy to help.

We were almost landing at Tenerife South airport, when I learned where they were heading. They were on their way to test the waves of El Medano for the first time
by kitesurfing them for a week. They told me that they paid €40 each to Ryanair for the transport of their kitesurfing equipment. I would say that that price is worth it, as I know that they would have a great time.

Many, tourists who spoke French, Dutch as well as German were on that aircraft of cheap flights to Tenerife South. Besides, the plane was almost full. Therefore, one may assume that many of that Benelux triangle which is served by Ryanair Maastricht Aachen in summer may bring plenty new fans for el Medano eventually, as surfing, bodysurfing, windsurfing and kitesurfing Tenerife belong to growing adventure sports in Europe.

Dont' forget the power of word of mouth. The fame of El Medano kitesurfing can only grow.

Watch the biggest kitesurf jump video to get a good idea about what's different between windsurfing and kitesurfing.

Kitesurfing is for seasoned surfers.

However there are good surf schools in el Medano Tenerife, as well as the Picacho Surf Shop and the OTC windsurf and kitesurfing testing center. They are all near the beach of this village of less than 8000 inhabitants.

The only Tenerife hotel which has feet in the ocean

Hopefully, I will also locate a private holiday home in Tenerife El Medano, such as a villa which I am prepared to recommend to you, sometime soon.

Water sports that include Siam Park  with surf wave machine but, without kites.

From kitesurfing Tenerife back to El Medano Tenerife with many photos.