Windsurf Tenerife on a day when winds are less strong, when you are learning or where a parallel breakwater diminishes the strength and size of the oncoming wave, such as on the Martianez surf beach in Puerto de la Cruz which is ideal for learners.

Also, take beginner classes, as coaches know exactly what size of wave will be best for you at a given time of the day and not to forget the swell it has.

Look at the photo of windsurfing in Tenerife beside. There, kites seem to glide on the waves, as gently as leisure cruisers. They look like gigantic, exotic butterflies in an almost orderly row which come towards you on the ocean.

It was dry and warm on August 19, 2011, when this surf photo was taken. The temperature was 30 degrees Celsius. This and the African light reminded me southern Spain surfing or Moroccan Agadir or Tunesian Djerba coasts. 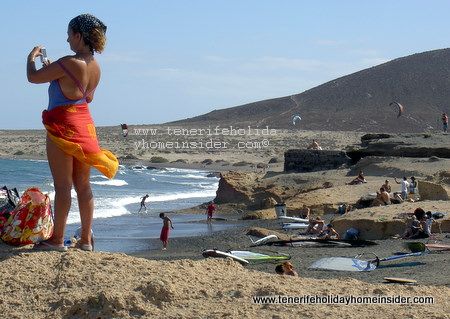 Out of the norm sea breeze bliss

In fact, the wind velocity of el Medano was perfect for learners. You can see, how the ideal seabreeze moved the light, orange beach cloth, which a woman had wrapped around her hips. This photo also reveals some of the secrets of El Medano's geology here.

On that day, as usual, beach Playa Grande El Medano was for family holidays, when windsurfing was on the agenda.

Many kids were frolicking with bodyboards and surfboards with and without kites in the sea. Contrary to beach El Cabezo, the Playa Grande beach is not for professional windsurf Tenerife of more extreme sports.

Winds can be under 30 knots in el Medano Tenerife sometimes, off lately. Perhaps, this is due to global warming, as some experienced fans of the extreme sports of the surf like to think. Even 10 knot waves are said to have occurred in el Medano since 2007, while others which almost reached the 50 knot mark also came up.

However, some are nostalgic about the good old days of better windsurf. Skeptics doubt that surfing was better with bigger waves and faster windspeed in the past. However, dads may love to say that windsurfing Tenerife was much more challenging, earlier on. Anyway, there were no complaints during the last World windsurfing championships of El Medano July 2011, when speed contests were taken.

Sure, it is easier to windsurf Tenerife now.

It's a fact that the eqipment for windsurfing, bodysurfing and kitesurfing has gone a very long way. Sports equipment manufacturing has seen an incredible future for surfing and made better and better surfing gadgets. Windsurfing equipment is much more light and more easy to handle, nowadays. Indeed, more can be done with it. Strings are smoother and faster to pull and more versatile than they were when a kiteboard was still hooked onto an epoxy pole. Boards and kites have also changed. The invention of fibreglass has also come useful with surfing equipment. Now, kites are made of different material and are so much more colorful and attractive.

All kites for windsurf Tenerife which you see in the air of el Medano are powerkites. They are made of high performance fabric. They mimic sails and have been around since the 1970ies. They allow to fly over sand and water faster than wind. Spot them by kitesurfing Tenerife on beach Playa del Cabezo which is basically at the end of the Medano beaches, except for the nudist beach La Tejita beyond Montaña Roja. 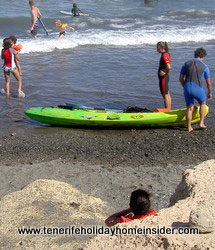 Kayak in the sand by beach Playa Grande El Medano

Notice a slender, modern canoo made of fibre glass by another scene of family holidays. The shallow vessel looks related to windsurf boards by its size and shape, but it's a very flat boat for sitting inside. It's for one way of ocean kayaking, which is very popular on Tenerife's Westcoast near Los Gigantes. So that's to kayak windsurfing.

Go to kitesurfing Tenerife to discover one reason why it belongs to extreme sports together with windsurfing and to find windsurf Tenerife schools, shops and other useful information related to surfing in general.

From windsurf Tenerife back to el Medano Tenerife to also learn about getting around, to find Tenerife South hotels close to its surf waves, shops, medical help, information about its neighborhood, other marine activities like flyfishing, deepsea fishing, sailing, as well as distances to airport, capital, Playa de las Americas and much more.