The Playa Martianez secrets besides Tenerife surf in winter.

Playa Martianez is a small, black city beach which was still known as  Orotava  beach by the locals by the middle of century XX. Depicted below shows what it looked like on its Costa Martianez coast at that time. 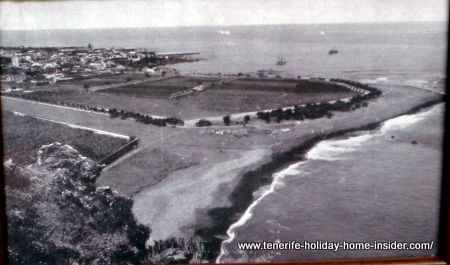 Stone backwash is a never ending problem. Hardly 200 of its length of 300 m are left for sun bathing. However, there were very interesting improvements done to the width of the sandy area by October 2014.

This surfer paradise  lacks much subtropical flair by its shores compared to the artistically landscaped beach of Puerto Cruz namely Playa Jardin, for example. However,  many surfers and swimmers like this town beach. 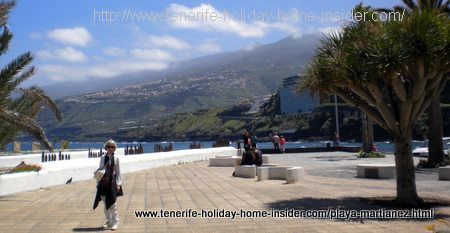 The beachfront Martianez is flanked by the very historical rocky outcrops the  'Acantilados' and many sky rise 4 star hotels beside them.

There, powerful deep blue waves extend further, such as toward the Orotava beaches Bollullo, Arcon and Pintos on an even wilder North coast and astound with unrivaled beauty. 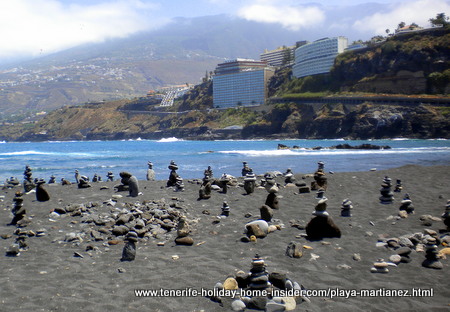 All pebbles were gone by October 2014. A much better and sandy beach is in place. The result of it is more privacy for sun bathers on a gentle slope. It all looks like it is now tucked between the Martianez cafe and a wall of its lakes. The right side of the seashore will be improved next.

The ocean's temperature of 23 degrees Celsius in summer invites for swimming. In winter, 18 degrees Celsius are ideal for surfing with a wet-suit. Strong UV beams always require sun protection. Outside sun temperatures are generally 24 - 28 Degrees Celsius depending on the season of the year.

A beach Martianez Coconut tree as a warm climate indicator 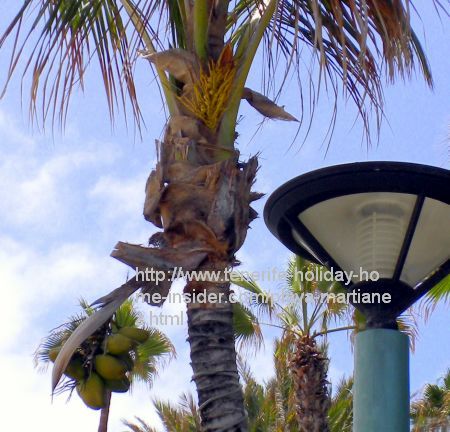 There's a coconut palm tree with a bunch of almost ripe coconuts called drupes. It stands to the right of the latest beach cafe. A truly tropical sight... It certainly can be seen from the Lago Martianez behind it. 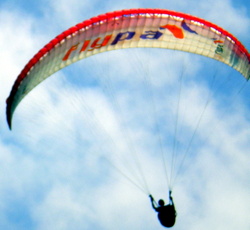 Then, a friend and I discovered something even more exciting.

A paraglider approached the bay. Suddenly, we witnessed something we had never expected. Find out more about this rarely seen incident of paragliding in Tenerife.

More than a face lift for Playa Martianez

Last not least, much needed revamping started at the end of 2014 until way into 2015 by the following measures

The breakwater which protects the bay runs from the end of Lago Martianez in westerly direction and is just long enough to make all the difference.

The waves are not of the easy kind where one can ride horizontally for a long time.

I have been told that there are two right waves called 'Derechas' in Spanish surfing terms. Only the one nearer to the Martianez cliffs is suited for the professional surfer. Of course, that part inside the bay is not crowded by surfboarding learners. However, the right wave on its left is good for surfing practices. Also, no dangerous rocks seem to be near its shore to endanger surf training.

Notice that the best swells of the Playa Martianez beach seem to be between October and end of April, contrary to the outh of Tenerife. This has been known to surf experts as far back as 1950.

Following watch my short video with a surfer who takes on the Martianez waves on October 20 in 2018... 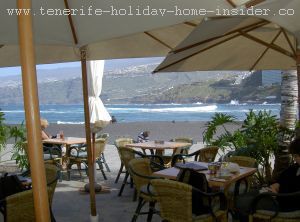 Now in 2018, the prices of this 'Bar/ Restaurante' don't show much difference for food and drink. New were also the looks of this small 300 meter long beachfront which had been improved.

Unfortunately, the sand that was added seemed to have been eaten up again by the ocean. That's why a drastic revamping was scheduled for 2014.

The palm grove with shrubs by the back wall of Lago Lido Martianez has grown nicely since 2009. That's where the beach promenade turns onto the breakwater walkway. This jetty keeps many strong currents off the lakes of Martianez as well as out of the Martianez Bay.

An additional artificial reef barrier is there at the northern end of Lago Martianez by our beach. This makeshift wave breaker is at least 10m deep, which isn't shown.

A saltwater pool below the tunnel at the other end of the beach was to be opened again for the public. This has not happened yet. 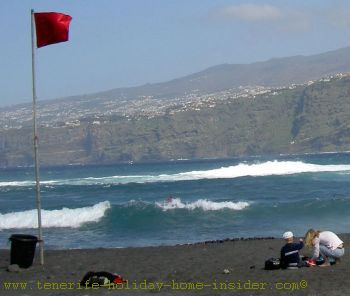 The Playa Martianez surfing beach is at the end of the renamed Avda.Familia Bethencourt Molina, the former Avda.Generalisimo and Avda.Colon. There Puerto Cruz Carnival events including vintage car shows take place during the year. Also music festivals at the border of the Martianez beach


Plenty pubs,restaurants, shops and some discos are close by. A highly popular one is in the Bar, Restaurant and Cafe named Paris also by the ocean front.

We were enjoying a great scenery at this beach while watching a surfer in a red bodysuit. A couple of other guys with their sleek modern boards were trying their luck to ride the waves.

Discover publicity displays by major surf board sellers, as portrayed in the photo beside. This happened during a Canary island surfing championship at Playa Martianez at the beginning of March 2009. It took place right in front of three hotels at Martianez.

At the time, La Santa Surf www.lasantasurf.es. were the organizers of the Canary Islands junior surf Championships at beach Martianez.

Marea Surf a new surf school on the beach 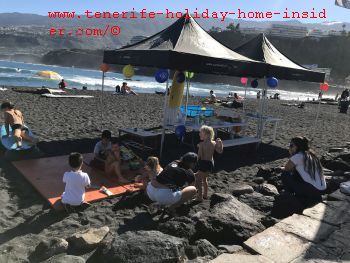 Check Marea Surf Facebook, in case they hold a surfing contest again in January 2019. By the way, this school keeps track of times of low and high tides at Martianez with the size of expected waves and other relevant facts for surfers. It's published at its beach club.

The beachfront depicted below isn't the same any more. It had a simple, most effective face-lift by October 2014. No more low wall and steps... Now, only casually placed, small boulders separate the promenade gently from the beach area. Everything runs smoothly into each other. A gigantic, visible progress. My compliments to the landscaper.

By the way, wild cats live in the spot where one can see the back end of the lido bordered by some shrubs, agaves and palms. A woman I know goes there almost daily to feed the animals. Every beach has some surprises. Right? 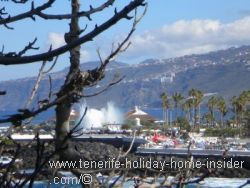 Playa Martianez beach has another great advantage. It's never really crowded because Playa Jardin, the Lago Martianez lido with its lakes as well as the rock beach pools San Telmo are nearby. Not to forget is a tiny beach by the old harbor and Muelle  where people also go to bath.

About 11 to 13 surfing enthusiasts were taking on the swell on that Saturday afternoon in 2011. Only, one advanced surfer was cruising all by himself close to the beach front hotel Bahia Principe San Felipe Tenerife. Access more Puerto Cruz hotels by that link... 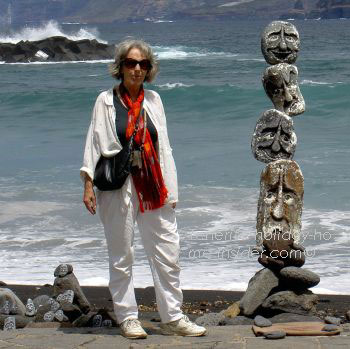 How get to the Playa Martianez surf beach from Tenerife South?

It's no problem to do Tenerife surf excursions to Puerto de la Cruz from  South when you plan to see more in town anyway. Find routes at Titsa public buses including times of arrival, the lot. Click the Titsa Web for English at the top right. Also mind the buses 102, 103 and 101 from the capital or number 325 from Los Gigantes to Puerto de la Cruz. Not to forget to go via Icod de Los Vinos. Bus 343 takes you from Los Cristianos.

Parking by the Playa Martianez beach for surfing

Click the map to enlarge where you read Martianez as well as other locations on the coast, such as at Loro Park where Playa Jardin is opposite with the free parking grounds to the right near Plaza del Charco... 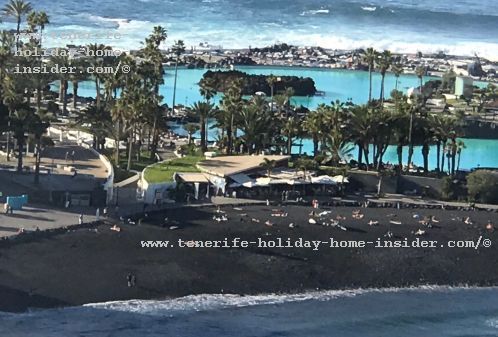 Playa Martianez with the adjoining Lago Lido Martianez by only a stone throw between them. Hence you could surf, while your spouse or girlfriend could go to the Lago

From Playa Martianez back to Tenerife beaches with and without surf.

Coming up in 2019 Kitesurf world tour at Sotavento here