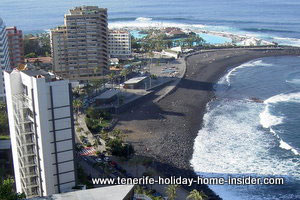 The  beach front hotel Bahia Principe San Felipe Tenerife of Puerto de la Cruz which is also for the disabled is in an ideal location 20 km from the north airport.

Detect the almost white skyscraper of this surf hotel on the front left of the photo. This Atlantic shore hotel is also very prominent on the town skyline ...

Take on two different right surf waves (Derechas) opposite at the beach Martianez with breath taking bay and terrific swells,  where end of winter surfing championships of the Canary Islands for juniors take place. They are organized by www.lasantasurf.es,  by the way.

Take note of the closeness of the Martianez surf hotel to the beach promenade. It's just remote enough to guaranty peace for relaxing. Encounter dance bars for inside and street dancing with live music at that waterfront. Also, find  shops, open air restaurants, underground casino, the town beach San Telmo, and the lakes of Martianez, as visible in the image above. 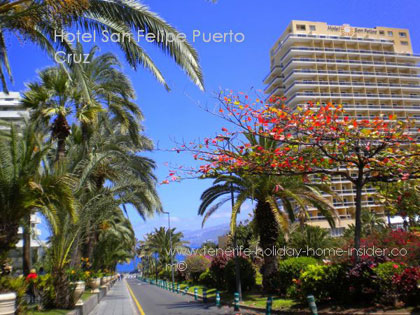 Indeed, the San Felipe isn't only on the beach front which has a relatively short beach promenade called Avda.Colon and Paseo San Telmo. However, this Puerto de la Cruz ocean promenade is one of the most stunning of all Canary Islands. Then it's also by the captivating, tropical town Rambla (parklike avenue) with tall old palm trees, flower beds of Lavender, Lillies, Crotons and other ccolorful tropical bushes. The sun bathed luxurious pool gardens of  hotel San Felipe echo this splendor of nature, as you may guess by the photo above which was taken just before Easter in April 5, 2014. 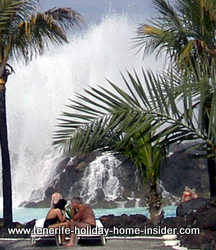 Furthermore, have the  Martianez Mall  almost at your finger tips. Both hotel and the mall are located by the lush, 'Puerto Cruz Rambla'. Walking 5 minutes up the road gets you there, even for Sunday shopping.

Spoil yourself a stone throw from this former H1 San Felipe seashore accommodation  at one of worlds' best semi natural swimming pools, namely Lago Martianez   the only subtropical lake lido with a casino underground below sea level.
This spot much lends itself for romantic vacations, as depicted by the photo beside.

There,  relax by local street art sculptures around blue lagoons with Caribbean flair.. 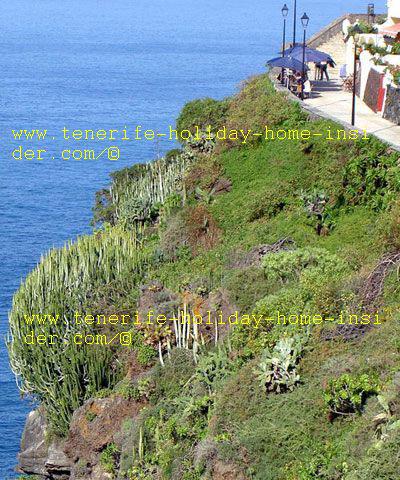 However, spend time by San Felipe Hotel's swimming pools, too.  It is in its very own subtropical paradise park which is flanked by the stunning cliffs called Acantilados Martianez with their most delicate, indigenous plants. They are still part of unspoiled Tenerife nature. Also, many archeological finds, which admire at the town's ethnic museum, prove that this area was favored by the aristocracy of ancient  Tenerife cavemen.

How get to the former Guanche King recluse above the beach front hotel?

Get there by following a nature trail within the Martianez cliffs from the main look-out of La Paz.

Not that I can remember the spots without any sun since 2001.

See more pictures of the Bahia Principe a hotel by the Martianez surf beach...

From beach front hotel  back to hotels Tenerife with the beach hotel El Medano and others.