Discover classic car shows which are not in Miami but, in Spain

The classic car shows shown below are in Spain's province Tenerife on the biggest of all Canary Islands. 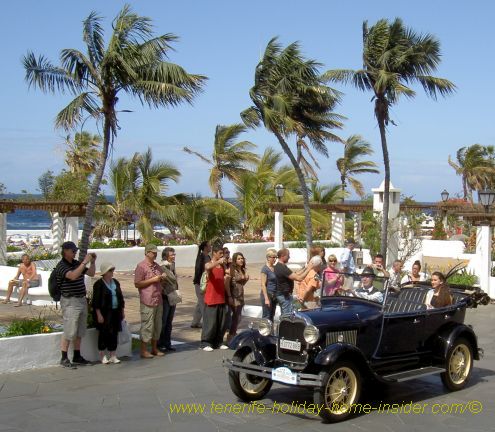 The exhibitions are mostly organized by the Tenerife www.retroclub, whose next classic car event may show its vehicles on another Island.

The dates of the Tenerife car rallies vary, as they depend on those of the yearly carnival.  A date for an independent car show in Avda.Colon Puerto de la Cruz of vintage cars for 2020 has not been set yet.  The so called Rally del Valle will take place as always a day before Ash Wednesday which will be February 25 in 2020. The vehicles will depart at the same spot in direction of the Orotava Valley at 2p.m.

So far, the Tenerife capital Santa Cruz didn't publish its usual  event yet on the last carnival day which is March 01 in 2020 for anything related to carnival cars, rallies or the like. This should have been in Avda. Francisco La Roche.

Mind that the Puerto Cruz and Santa Cruz car shows during the Tenerife mad season of carnival are different from those in some other places of the world.

An example of classic cars under palms by the ocean 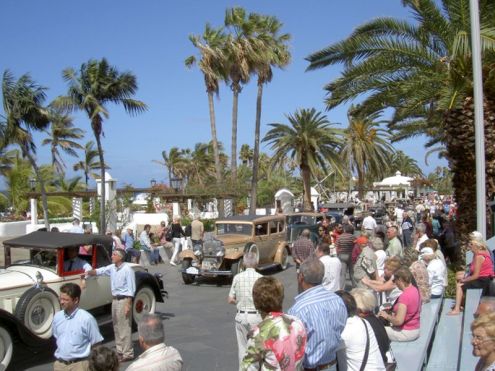 On March 08, 2011, the weather during the exhibitions was stunning as usual, as portrayed above. 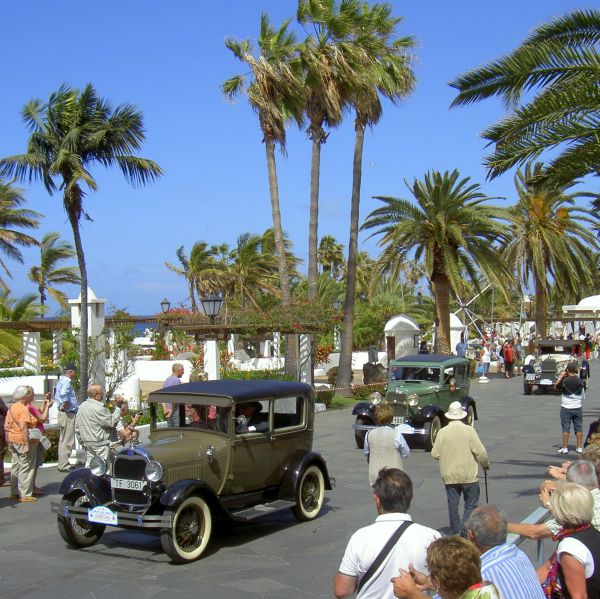 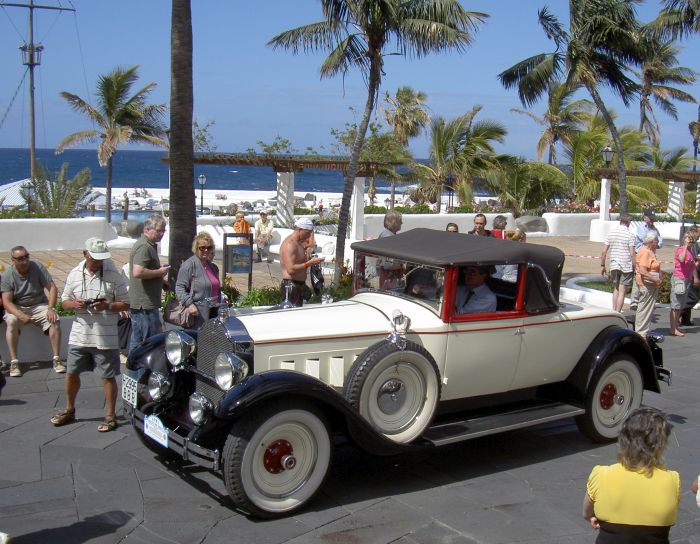 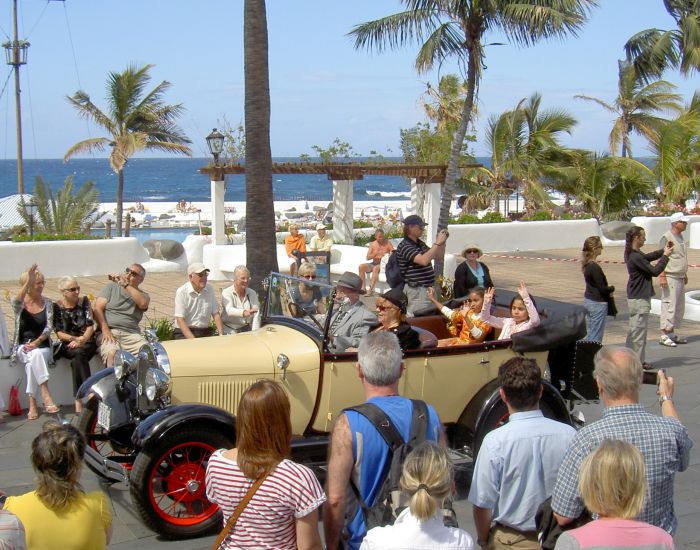 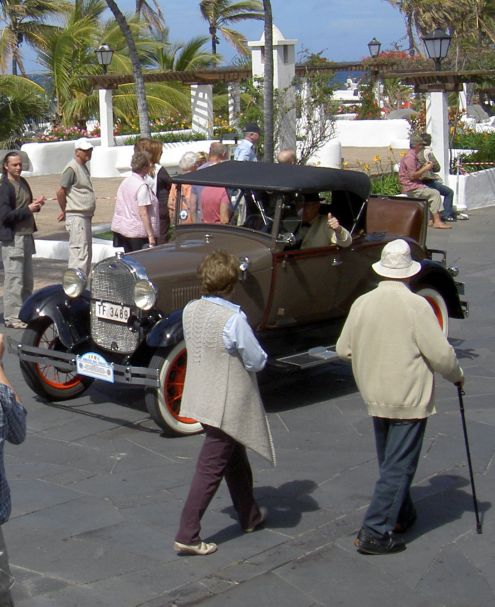 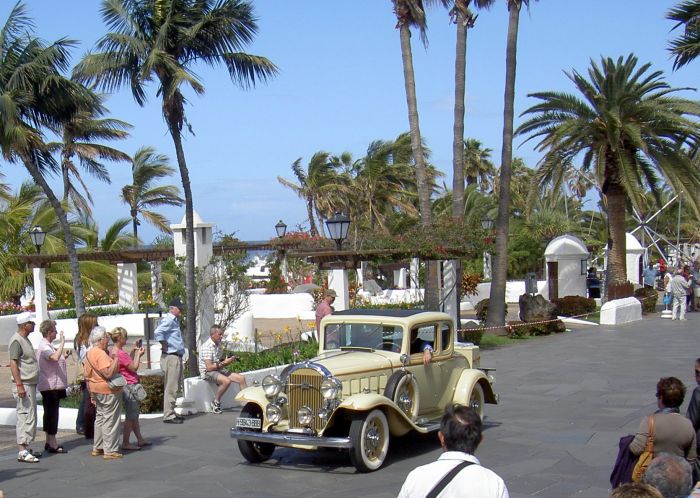 Atlantic ocean bathers didn't seem to find it cold to swim and to strip for the winter sun, while vintage cars were piloted past them. Temperamental palms by the wayside of Lago Lido Martianez lakes seemed to bow to the passing vehicles, as if they remembered them from the year before. 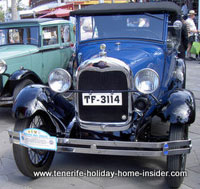 However, I wasn't happy. I remembered the first classic car shows, when the antique automobiles, such as this pioneer classic Ford paraded along Calle Zamora of old El Puerto Cruz town in some previous years. I preferred them very much. Why? In those days, many more people inside classic cars dressed the part.

Classic car shows on Carnival are nothing without Al Capone look a-likes who puff Cuban cigars. Also a vintage Ford must always be driven by a chauffeur, you know... That's why those were the good old days. Never mind the depression which followed in 1929.

Ladies on passenger seats of a 1920 or 1930 classic car should all be made up like Greta Garbo, Marlene Dietrich or Josephine Baker. Their hair styles, make-up and dress should mimic and remind the roaring twenties from far, at least. 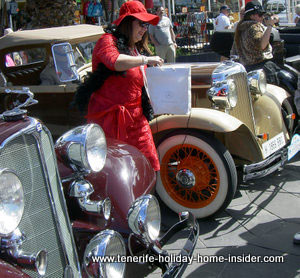 But then wait a minute...

There were a few ladies who had made the effort and tried to play along to the jazz age scene.

They were dressed somehow according to the 1930 fashion of a century long past.

Discover one woman with a stunning red dress beside, who is flanked by two classic cars.

The 'oldtimer vehicles' which had arrived from Avenida Colon were stunning and drove well, though.

By the way in 2011, all Tenerife classic cars were parked opposite the Lago Martianez.

Beside, admire a fleshy American Cadillac which was among them.

There was a yellow and black vintage Fiat car with an elderly driver that was dressed the part in Knickerbockers. Those casually smart trousers and their owner were befitting the mood of the Tenerife vintage car exhibition down to the T. Portrayed below is this olden day Fiat of the Tenerife classic carnival cars. 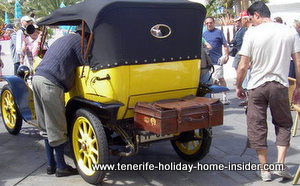 In fact, there are much more antique cars on Tenerife Island. Many were part of the 200 models displayed at the one hundredth birthday of Spain's Autoepoca association hosted by Mercedes Benz at Tenerife's fair grounds Recinto Ferial.

Discover, where to find the Tenerife Classic Car Club in Santa Cruz... There, you may also find out where to get spare parts for your vintage vehicle. Perhaps, events are published on its closed Facebook Page, which is not the case on its website.

Look out for Spain events for antique cars at www. feva.com...Most of Spain's 341 car clubs cater for vintage cars and almost all of them organize classic car shows and rallies.

Watch the next world biggest vintage car show Bromley Pageant in the UK on June 21 of 2020. Furthermore, find classic cars exhibited for sale non stop at www.thegallerybrummen.nl in the Netherlands. No, the Tenerife holiday home Insider doesn't earn commissions with any of those places. They don't even know her but knew her late husband.

Antique car shows for fans of art and beauty

Paris France, the city of culture, art and fashion also loves classic cars called des voitures classiques in French. Watch out for shows on the Champs Elysées, when you are there....

Needless to say is that Spanish provinces, such as Tenerife treasure their vintage cars as part of  Spanish  Art and culture and the shows with antique cars into according events.. 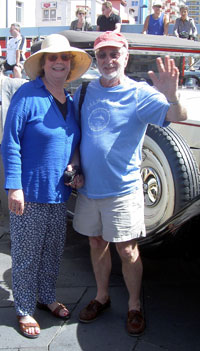 Classic car fans from the UK

The result of the antique car shows with the 1920 and 1930 fashion theme is welcome free entertainment  for young and old and not only for classic car fans. The British tourists of the Puerto de la Cruz March vintage car spectacle of March 2011 who are depicted beside, were absolutely enchanted with all of it and said that they would be back for it next year. 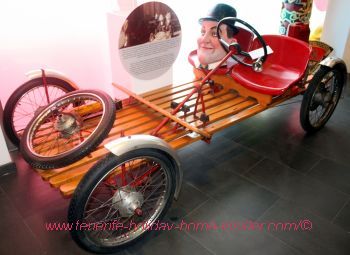 Discover more about the first carnival car that arrived, way back in Santa Cruz by clicking the photo and learn all about the new House of Carnival.

From classic car shows back to Tenerife attractions carnival.