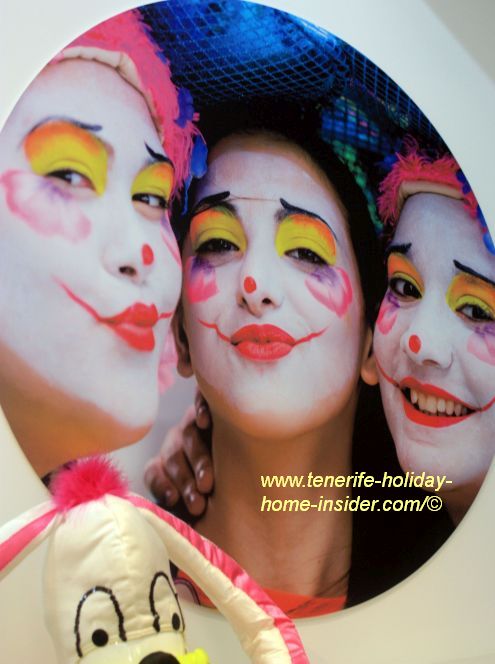 Casa del Carnaval of Tenerife a kaleidoscope for the senses like happiness and to study design.

Indeed, a visit at Casa del Carnaval the House of Carnival will set you into good mood.
Why?
It's much more than a fantasy carnival museum and its happy vibes are contagious.

It's known for new, vibrant exhibitions in Tenerife.

It's not only reborn yearly like the Sardine which is buried at the end of each season of frenzy. It also evolves with innovations.

This is why the center shuts its doors on December 31. Then, it prepares for the coming hilarious disguise season.

Costume design, Murga and Comparsa reality shows belong to the world best at the Santa Cruz de Tenerife house of Carnival, while Rondallas are totally unique. 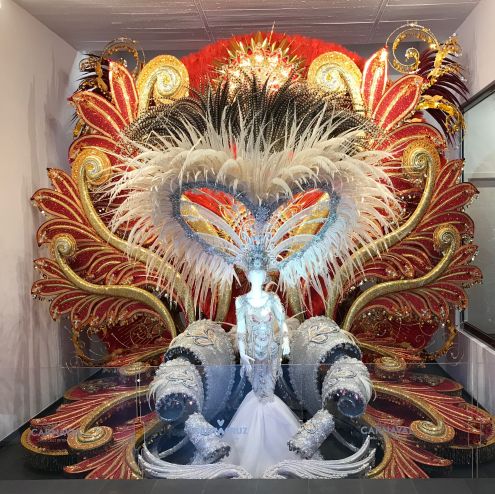 Eventually a miniature of it will be produced and will be kept with previous queen sculptures for their spectacular carnival art and design of their costumes in the special hall of all former reinas del carnaval.  Following is a photo that portrayes the last queen of 2018 how she looked live. 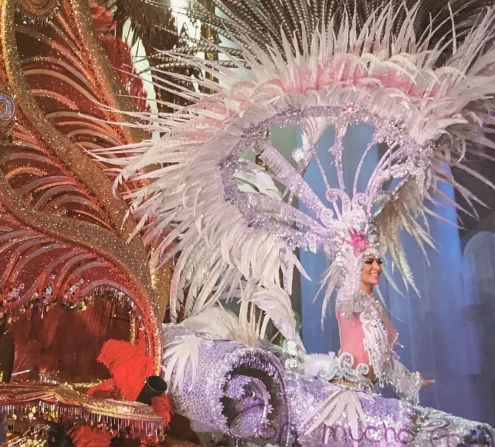 Tenerife Carnival queen of 2018 Carmen Laura Lourido
By the way, the latest ten carnival poster designs are on the wall at this exhibition center. Vote for the one you prefer at online before September 28 of 2018

Its three exhibition halls with a surface of 1100 square meters form a treasure house of magnetic fun and thrills.  Contagious smiles and gaiety look at you from everywhere on its walls. 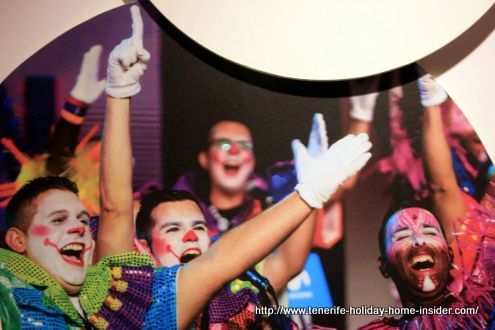 It's like an explosion of radiant joy called Alegria in Spanish. This is the typical carnival brand of the Santa Cruz de Tenerife capital.

Encounter the latest main carnival empress in various formats. Her gleeful radiance overpowers with her head jewelry the diamond headpiece and the rest of her gigantic garments. 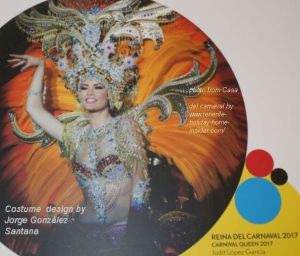 Less is more only applies to the jeweled bikinis that are worn by all Carnival head queens, nowadays.

The frame of craft works that surrounds her is larger than life. At Casa del Carnaval, its feathers are often squashed under the ceiling, as if it was no limit.

Actually there are three queens of various age groups.
An elderly queen whose warm and welcoming charisma is unbeatable is always part of the set. The enchanting innocence of the Reina Infantil the Little Girl Queen rounds it off. 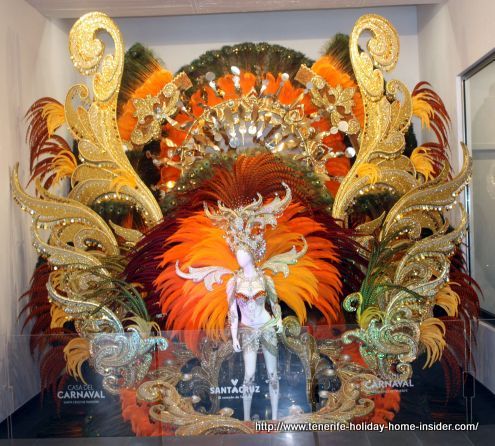 Gigantic Carnival design with more than 10000 feathers in real life for the 2017 Carnival Queen dress and decoration by Gorge González Santana - Depicted is the museum reproduction.

Many "miniature reproductions" of the center pieces of Tenerife queen carnival floats are also there.  Pink for a happy world of make believe dominates together with silver and gold for glamor and success.

Casa del Carnaval with hall of Tenerife history of carnival

A queen sculpture of 1987 called Carnival Fantasy draws you in. Its carnivalesque, enormous dress with head peace stands on the floor. It's lavish green feathers sweep the top of the room. The fantasy statue leads to the hall of disguise costumes and historic events of the Santa Cruz mad season's past. 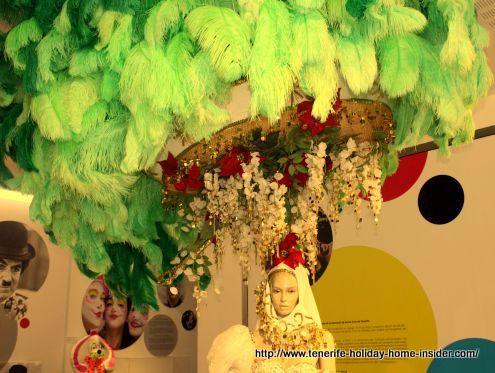 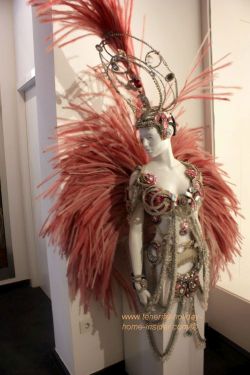 1920 Fashion of carnival on Alabaster statue.

More glowing queens from way back line the walls with life size sculptures. Their utterly captivating hats, headdresses and attire from top to toe are a sight to behold.

Some have faces, others don't. However, they almost look as if they were made of smooth Vintage Italian Alabuster marble.

Their bodies resemble sculptures that were carved by the ancient Greek.

Admire the life size Carnival Model statue beside. It's clad in an olden days  fashion. Its breath taking headpiece would have been loved by fashion designers of the 1920 or by the Great Gatsby.

More of the General Exhibition Hall. 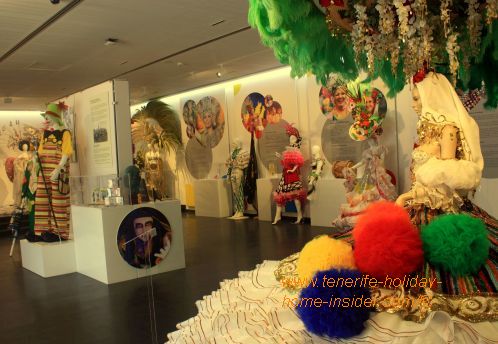 Exhibitions in Tenerife of carnival. 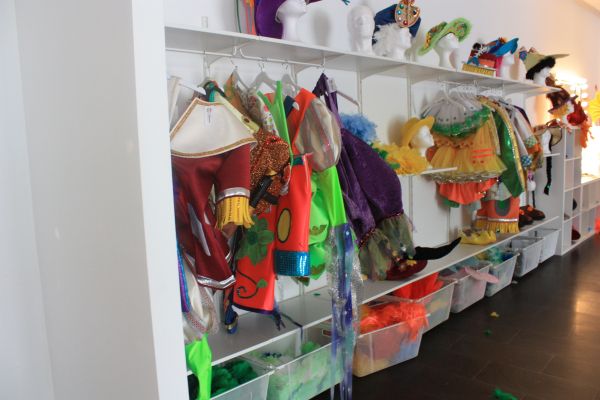 Otherwise,  the best at this Carnival Exhibition Center Casa del Carnaval are the bewitching photos of smashing, gleeful happiness and faces that glow of contentment. Gigantic round dots of rainbow red, yellow, blue and green add their signature of merriment to all its halls. 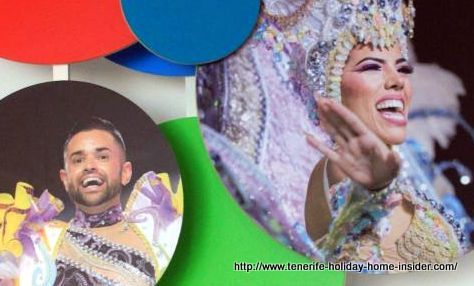 Both repeated dots of rainbow colors and the smiles pop up in between statues like jolly tunes of music that put you into almost euphoric high spirits.

Its yearly result of competitions is breath taking. 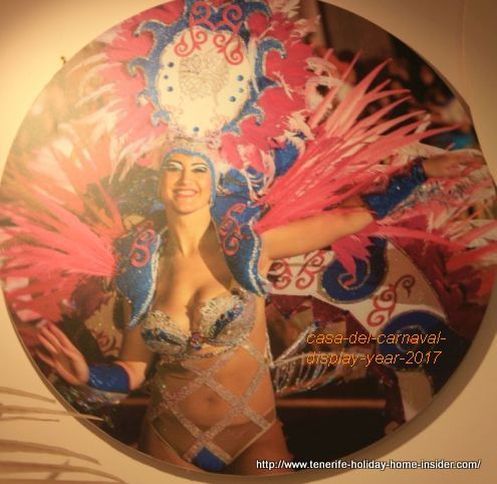 The contests are for best dancing Comparsa, musical performances, carnival songs of Murga satire and  shows, Rondalla presentations and most outstanding costume design of the various groups. 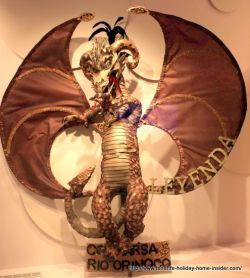 It happens long time before the so called crazy fourth season of Tenerife's Winter and Spring.

An extraordinary example of superb design was the 2017 banner of the Comparsa Rio Orinoco.

Video shows with the pulsating rhythm of exotic and dashing Comparsa or of jovial and highly witty Murga are yours to watch by the push of a button. However, the latter only put grins to the faces of those who understand Spanish. 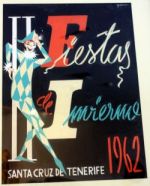 This compromise during the Franco dictatorship until 1976 represents almost a triumph for the carnival to live on.

There are vintage photos of 1965. They feature the Venezuelan founder Manuel Munzón who created the first Comparsa of Tenerife called Los Rumberos in that year. 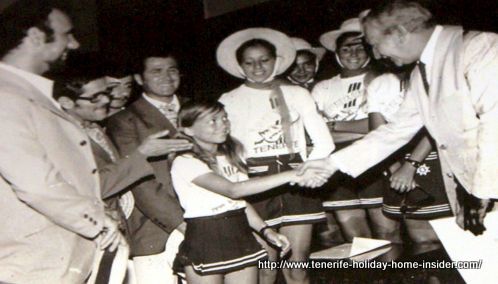 Don Manuel also held its first competition of four  dance groups in 1975 at the Plaza de los Torros the former bull fight stadium. Some of early songbooks by the Comparsa Los Rumberos are displayed. They were sold to help with expenses.

Of course, there is much about Don Enrique. He was the founder of the adult Murga. He held the first children Murga contests. He created the Afilarmonica Nifu Nifa club and shows. His featured carnival musical instruments the Sandonga of percussion and an ancient Murga trumpet made of cardboard are jolly delights. 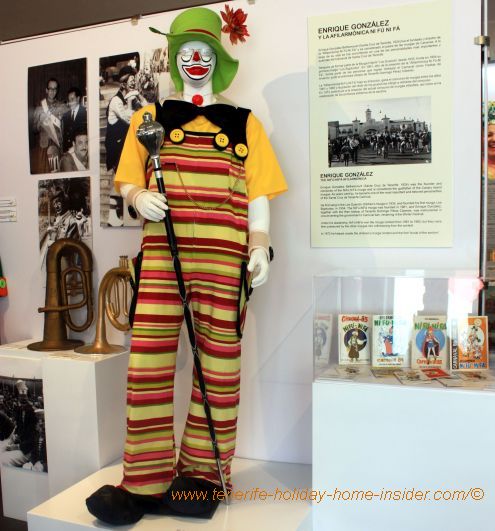 Don Enrique as Murga in 2010 with his last worn carnival costume. 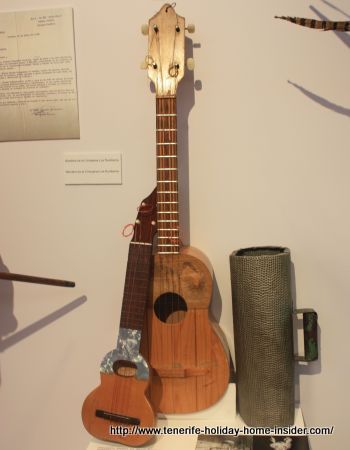 A Timple made of a Pumpkin and a peculiar Güiro as well as a Venezuelan Cuatro make us cheer. They belonged to Don Manuel of the historical Tenerife Comparsa Los Romberos. 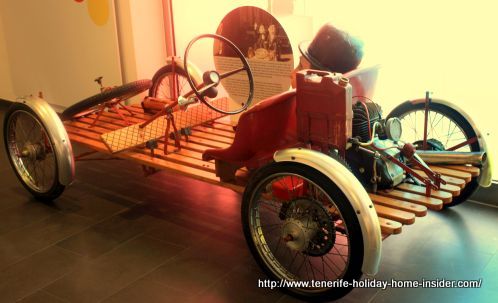 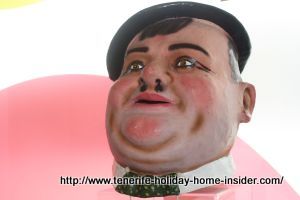 There is no space for sorrow and depression.  Hardship is gone with the wind in this space of frenzy, color, form, dance, ingenuity and heavenly harmony. You are bound to be overwhelmed and may feel like on cloud Nine.

Getting to the House of Tenerife Carnival

Mind the four rainbow colors the brand icons outside the center. 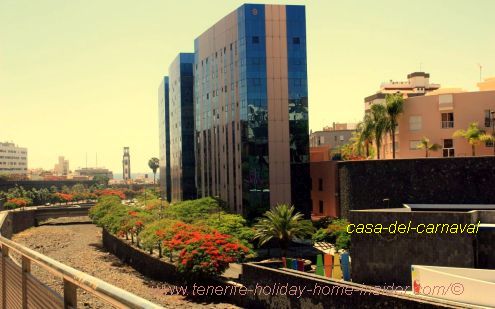 Other amenities of the House of Carnival 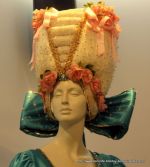 Would you like to see the lavish head decorations of the House of Carnival?

Here they are and depicted beside is just one headpiece example of them.

Click on the little photo to see many more.

From Casa del Carnaval back to Tenerife attractions of carnival