Burial of Sardine the Entierro de la Sardina in many facets

Hard to imagine is any burial of  Sardine or Entierro de la Sardine, as called in Spanish.

However, it's very important.

That's why the next burial for 2018 has already been scheduled for February 14.

Look at this stunning Blue Fish which is an important Carnival icon of Puerto de la Cruz... By the way, there will be a new version very much like the one below. 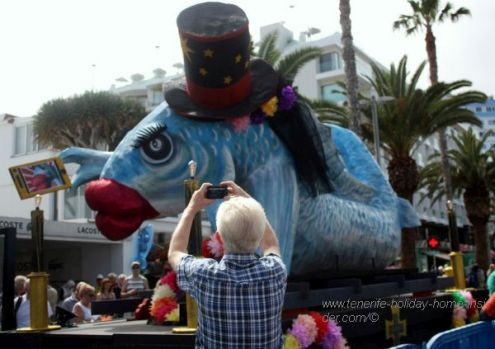 This ocean mammal looks so sexy, young and curvy. It's so trendy with its false eyelashes in full swing of the carnival frenzy. The Sardine Diva of 2017 of the oldest Tenerife resort shows no sign of wanting to quit life.

She  still takes her own Selfie photo while already exhibited on a black funerary vehicle in Avenida de Colón. 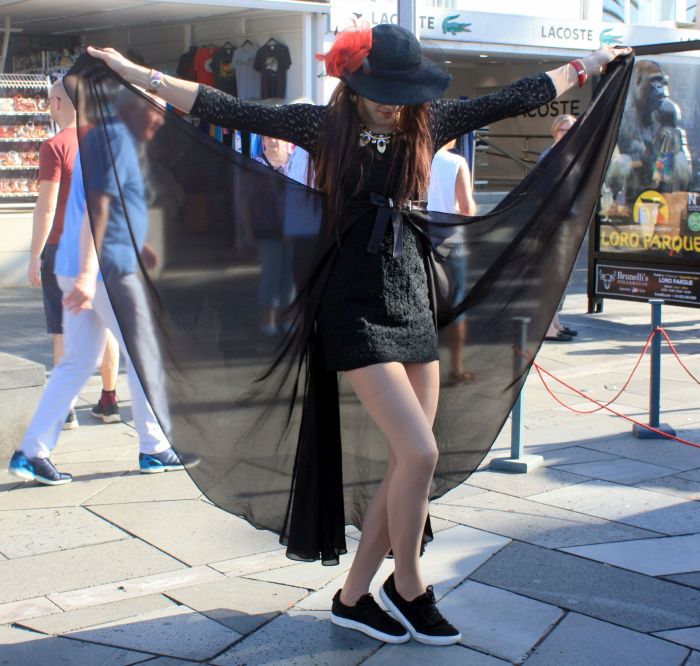 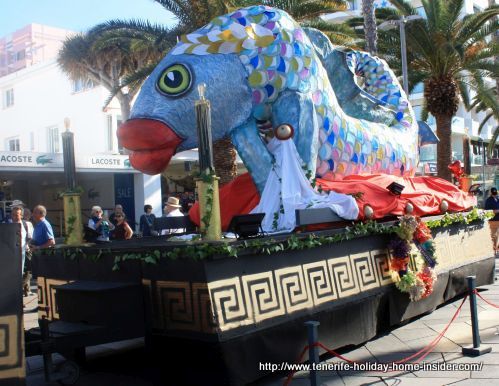 Preview of a more mature sardine before her burial of 2018 in Puerto de la Cruz. 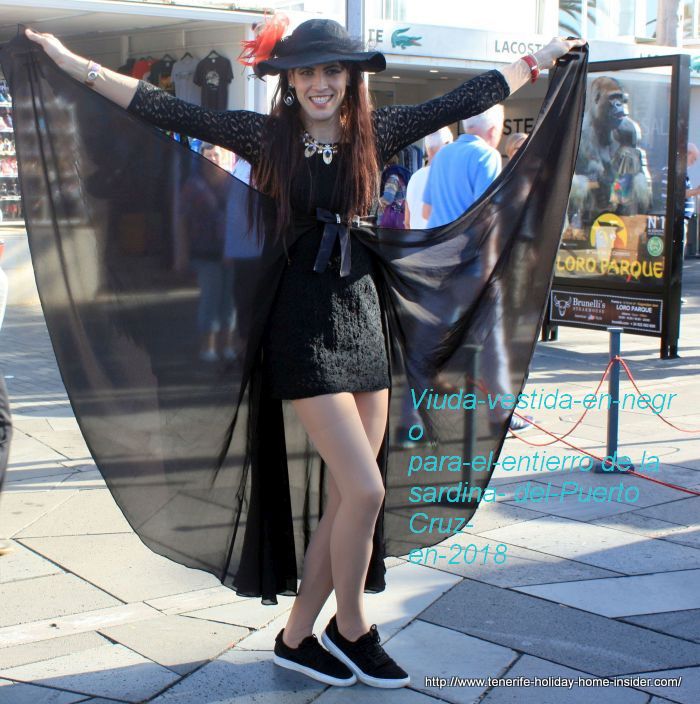 Mind the show may only be in the eye of the beholder but the presenter is certainly talented to do it.

Otherwise, the Sardine of 2018 seems to be much more mature.

In real life, age may be judged by the natural growth rings of the scales. Also, she may have passed the stage where taking a selfie at her own funeral became less important. This is contrary to the Tenerife burial of Sardine of 2017. 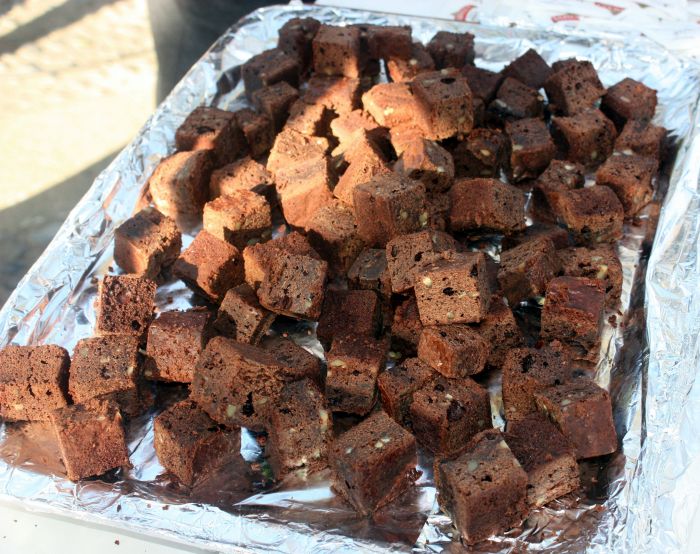 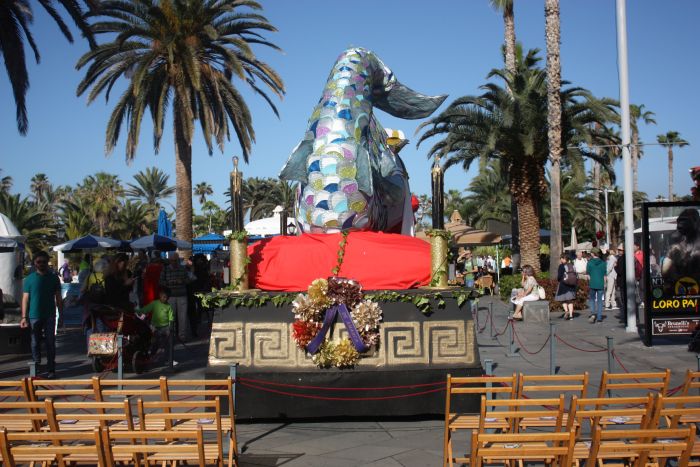 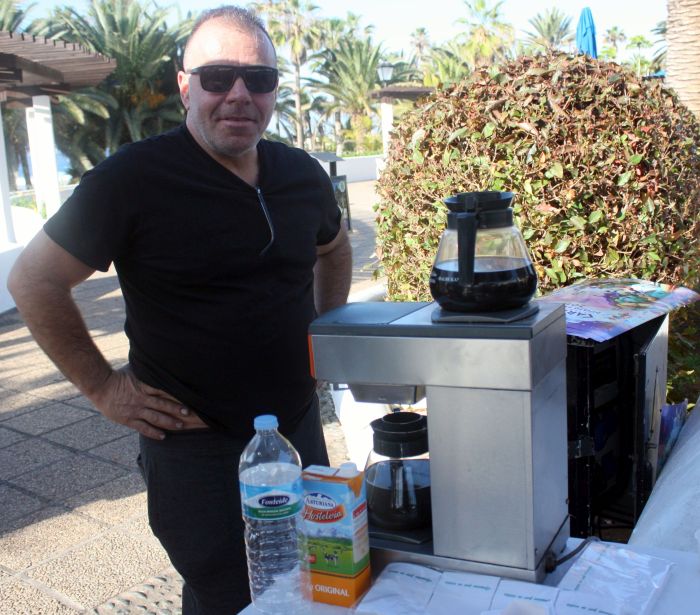 Funeraria for Funerary on the truck 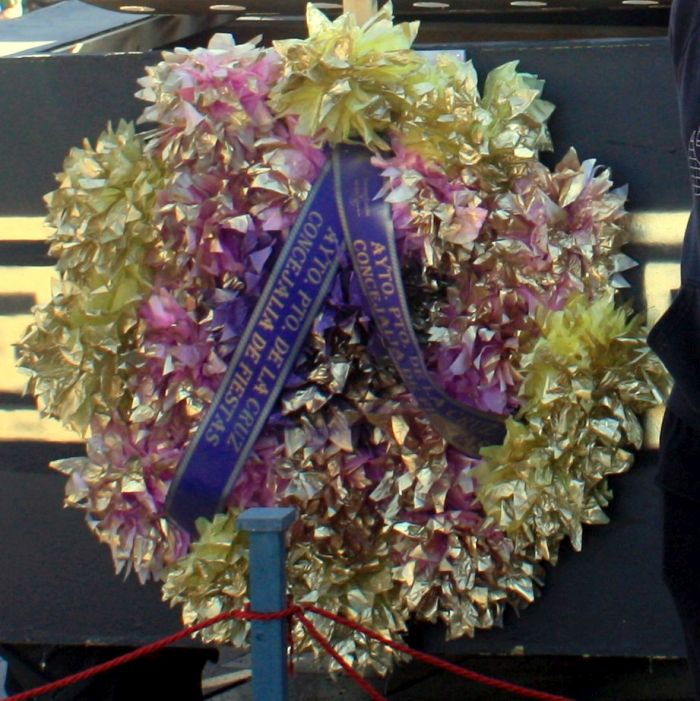 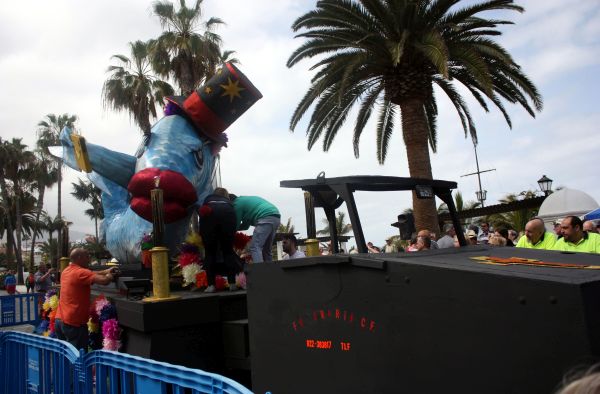 Only the Christian Cross on its bonnet and the inscription Funeraria in Spanish give away what this set-up is all about.

The funerary flowers that adorn the vehicle are in happy rainbow colors. 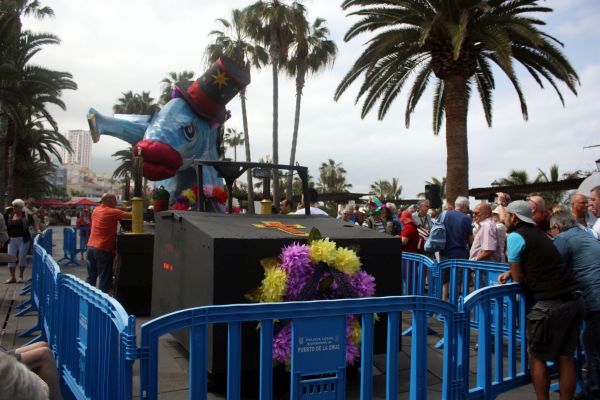 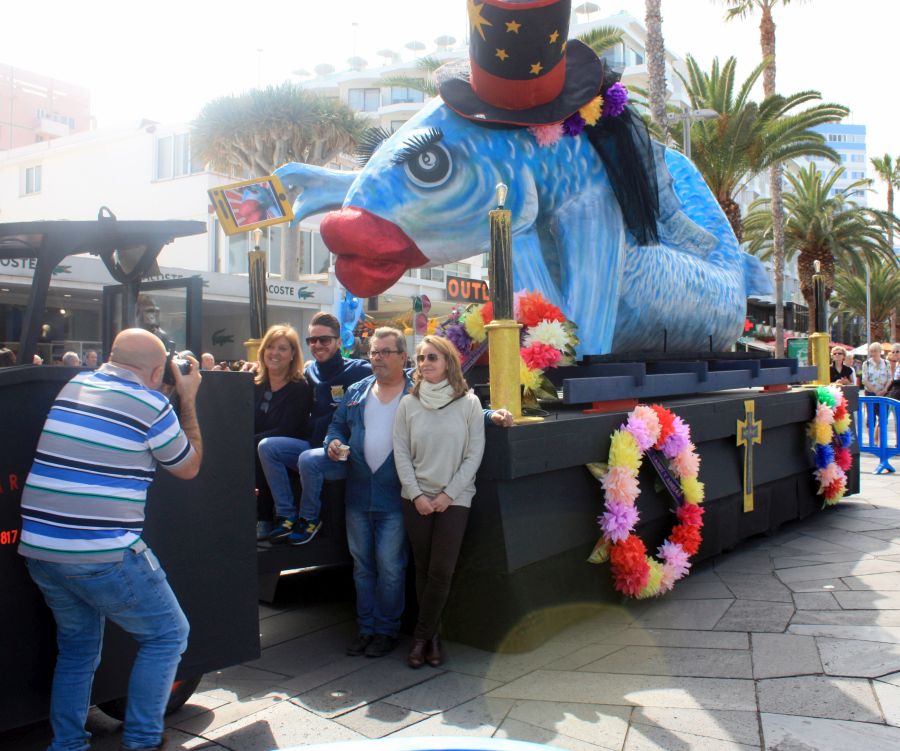 Sardine helpers or artists of 2017 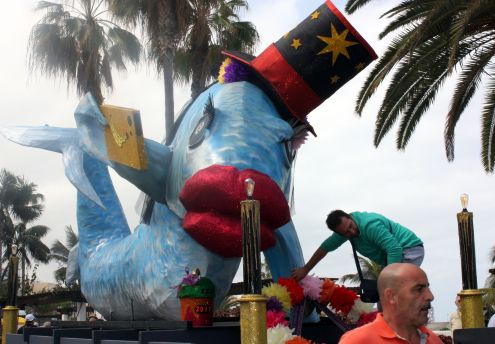 Tall, electric candles are part of the last rites of funeration. Traditions require four funeral lights. They are mounted on holders that look like made of brass. Madam Carnaval the Sardine deserves only the best for her "Farewell". 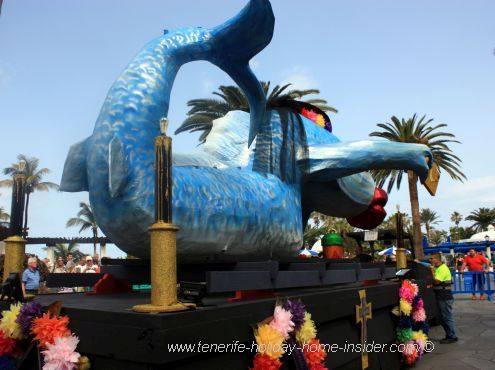 Funeral lights two in front and two in the back

Two lights must be in front and two on the rear of the funerary vehicle.   Besides, the lighting makes its transport legal for night travel to its cremation and burial place by the sea. 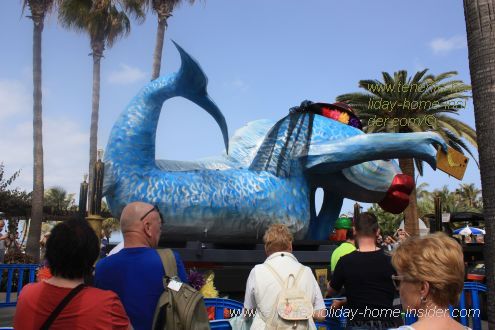 Moaning widows that can't join the solemnities may gather there to pay their last respects. Some shed crocodile tears, others lament with shrill cries.

Did you know that there is no age restriction to pay homage to the icon of  the subtropical Tenerife carnival by the sea ?

Little children are not uncommon in the procession that leads to the burial ground by the harbor. 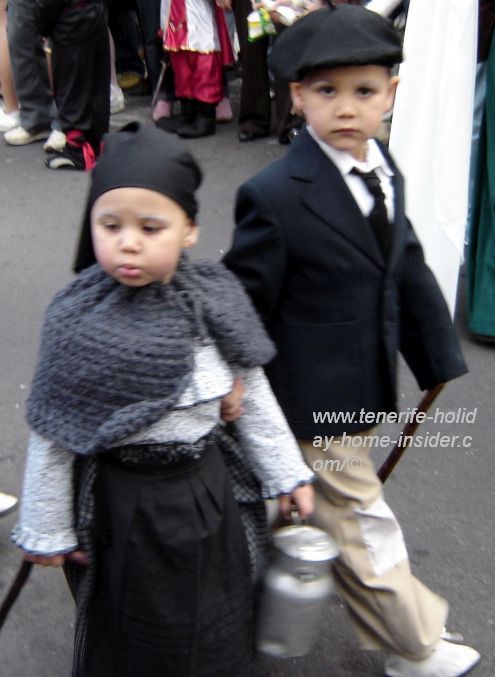 Moaner of Carnival in Tenerife 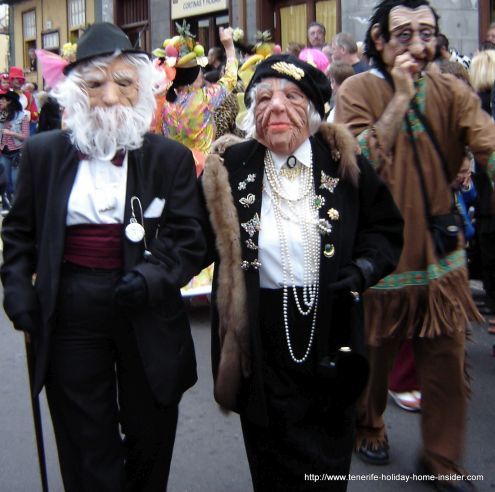 Obsequity for the Sardine La Sardina.

Once, a distressed and scarcely dressed widower with fishnet stockings had his own funeral cult. He  drowned his grief for the doomed sardine with a glass of gin during the burial procession.
By the way, El Duelo de la Sardina means in English bemoaning the destiny of the carnival Sardine.  This event in Puerto de la Cruz was advertised in 2017 for lunchtime on Ash Wednesday.

Reasons for the Burial of Sardine

Carnival is limited by the Catholic faith. It has to make way for Cuaresma which is Lent.

However, the season of disguise is to be reborn. In fact, the yearly festival of mockery and satire with fancy dress never dies for good. It comes back with a new body for new attire, unless an Adam's or flimsy costume is to make a statement.

Most unique traditions of the burial of Sardine

You find the last respects during the Sardine Carnival funeral most celebrated in Catholic countries with Latin and Spanish traditions.  The Entierro de la Sardina de Murcia a carnival burial in mainland Spain is much talked about and so is one in Uruguay.

However, Tenerife has the most varied cults in honor of the Sardine.  Processions and cremations  which are followed by street dancing always take place at night. The day of the event is usually Ash Wednesday. 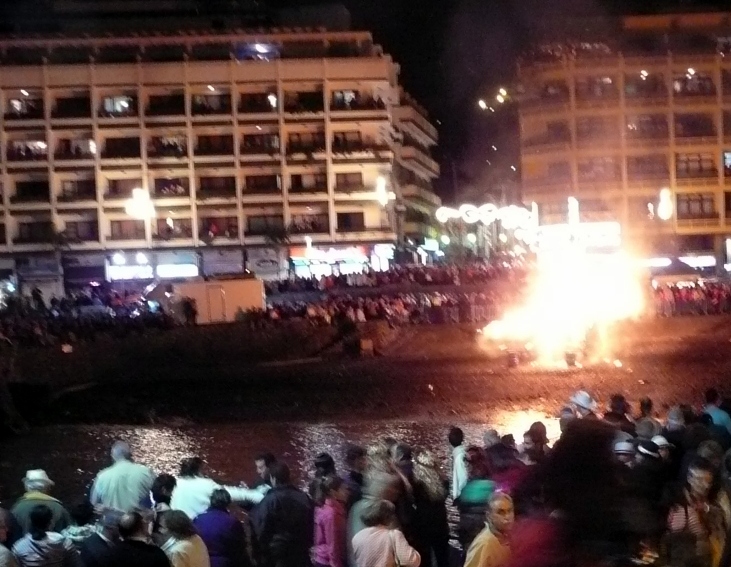 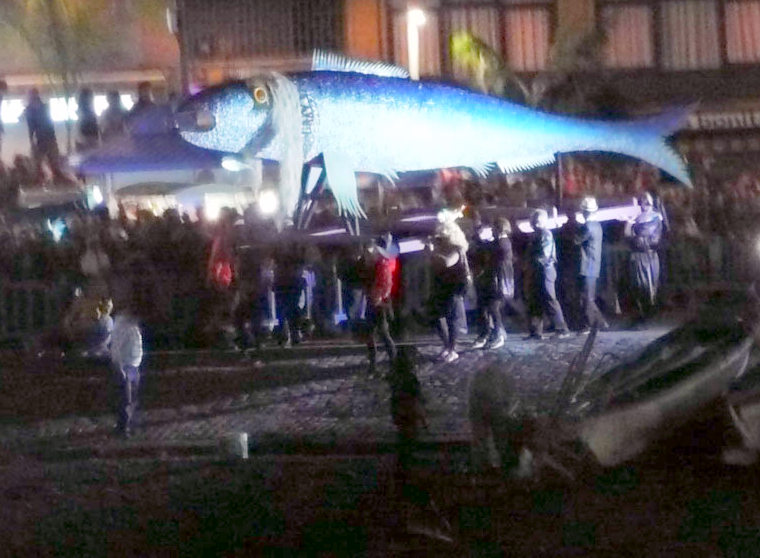 The Tenerife history of the Sardine funeral

This goes back to the late Godfather of the Tenerife Murga and the Afilarmónica NiFu NiFa. He was Enrique Gonzalez Bethencourt. In 1972, Don Enrique organized the first Sardine Burial in Santa Cruz the capital of Tenerife.

Duesseldorf Carnival and the burial of Sardine

For more than 25 years, the German Carnival Tenerife from the Düsseldorf area has never missed the Sardine  event in Puerto de la Cruz.
There, British and Irish settlers of long ago also remain her faithful friends.  This isn't only because of Shakespeare's notorious praise of the town's historic product the potent Malvasia wine.

Los Realejos pays Carnival credit to the Rascachusa or to Rascayu. The latter was a deplorable gardener who never came to grips with the death of his wife. Eventually, he was seen during a full moon at the cemetery. There, he was dancing with skeletons of ghosts of the diseased. All this is dramatically reenacted as a free street show for all on the San Agustin Town Square. Obviously, it rings a change to the symbolic meaning of farewell to the Sardine of nearby El Puerto Cruz.  The Rascayu ends up on the pyre on Ash Wednesdays before the last Murga event on the Saturday after. Meantime, the village Palo Blanco of Realejos pays its last respect to Don Teodoro,  instead.

This Tenerife drama takes place every Friday once a year after the main Tuesday Carnival parade of Güímar. For example on March 10 in 2017.

The free live street shows of the witches who turned into donkeys (burras) go back to 1992. Since then, young volunteers of the town create the new Carnaval paraphernalia for the angelic battle with devils and witches every year. Its event posters are always outstanding. However the one of 2017 was vetoed by public uproar via Whats App.

The legendary story of witches of Gúímar by live drama

The Sardine of Güímar is not burned alone on the faggots.  The Carnival Burras also end up in the cleansing flames.  A big street festival under moon as well as disco lights enact the live drama of an ancient legend. Witches turned themselves into donkeys called Burras in Spanish. Such disguise made it possible for the bedeviled women to enter the homes of humble peasants to create havoc and evil deeds. 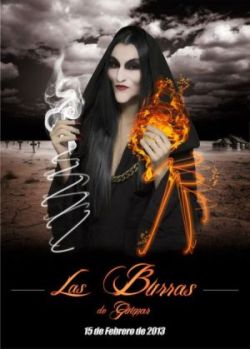 Some witches in donkey costumes let themselves down by ropes from upper floors of the picturesque houses onto the old San Pedro Square. Others seem to appear from nowhere.

The dramatized story that enfolds on Güímar's day of farewell to Carnival is a long and thrilling one. Best is if your own imagination adds to it, as the acting has not always been up to spec contrary to the choreography.

Eventually, the heretic women mix with the devils that arrive with the Sardine. For a while, the witchcraft meddlers are seen to brew their magic potion for evil casts. Soon, they whirl around in ecstasy of almost frivolous, lusty and crazy behavior.

The Holy Inquisition with the Bishop and his clergy up front arrives together with the Sardine. That's when the music also changes. A fierce battle between a troupe of angels led by Saint Michael ends in the victory of good against evil. Soon, the witches are spotted with frenetic movements of hysteria, panic and desperation. That's when the good is taking the upper hand.

Both the Sardine and the fancy animal dress of the Burras are devoured by the fire. Only the witches seem to have been able to escape for the future. They will be back, for sure.

Conclusion to the elimination of every year's Sardine

The burial of Sardine and Burras is a meaningful cleansing symbol of carnival.  The macabre  act of the pyre wipes out all evil elements and past vice of the period. The cremation with all preceding rites is vital for a rebirth in years to come. 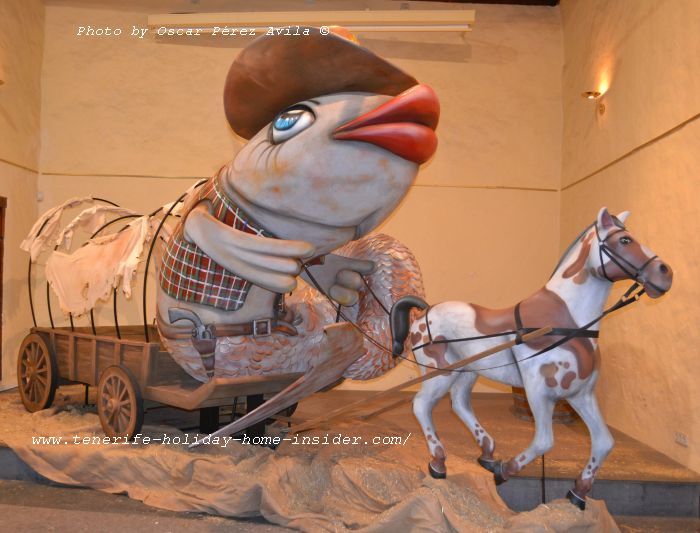 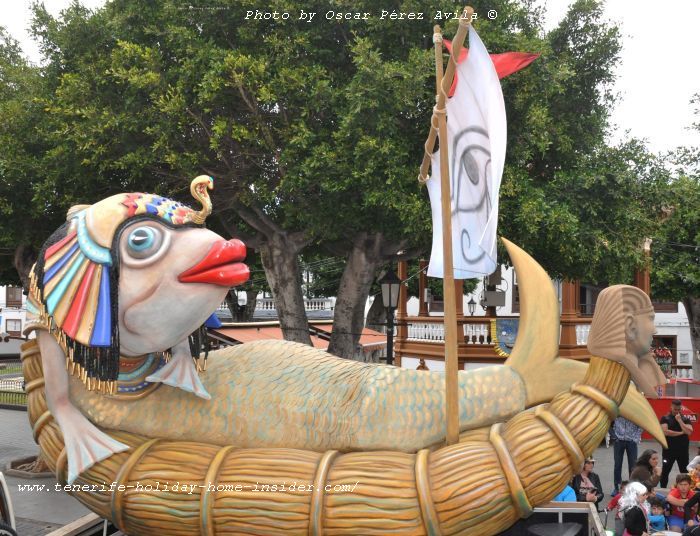 Only Spain's painter Goya pictured the burial of the Sardine in more gloomy and evil chaos. His brush portrayed crime, sexual abuse, violence, cannibalism and even more atrocious apocalyptic scenes.

However in our times, such extremes are unlikely to happen. Even helicopters besides many head of police monitor the public's safety during every Tenerife Entierro de la Sardine the Sardine funeral.

About the Entierro de la Sardina the Sardine funeral by Goya