A carnival club which made Tenerife history Santa Cruz 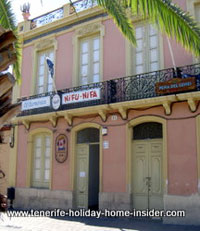 The carnival club house of Santa Cruz Tenerife which is depicted beside could tell many stories. 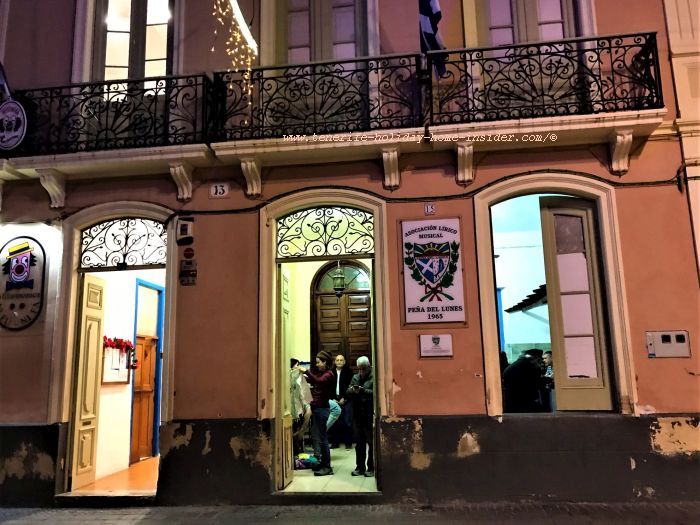 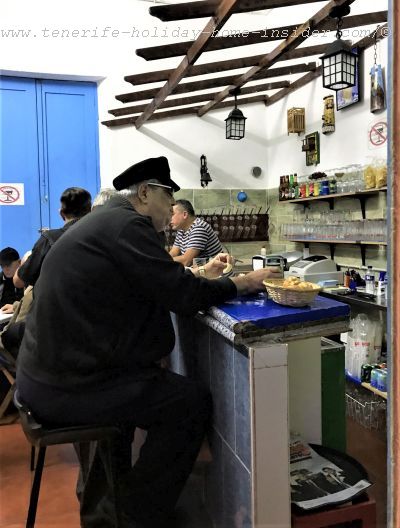 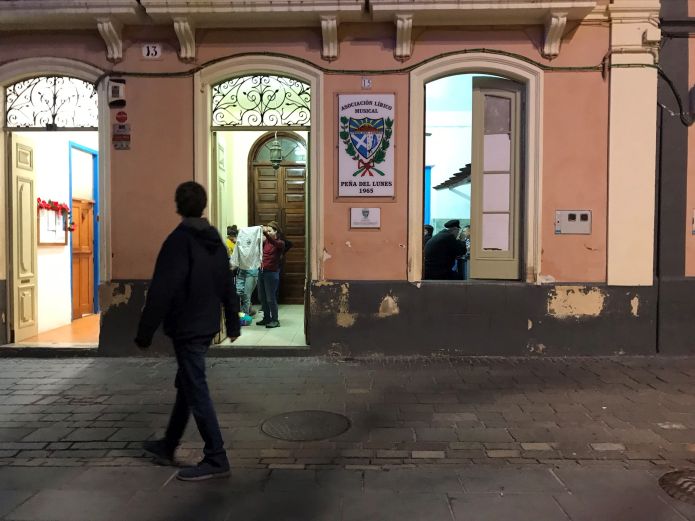 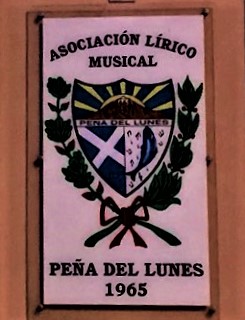 This Nifu-Nifa Associación Lírica musical Peña Lunes 1965 was again much in the limelight long time after the Tenerife Carnival was over in 2010.

The occasion was the passing away of its most renown co-founder Don Henrique.

The organization that he brought to life is known as the Tenerife Fufa or Afilarmonica. That's a Philharmonic carnival orchestra which is also a great place of friendships for all Murgas and other Carnival groups. Mind Los Fregolinos are part of it.

Agenda for 2020 of Carnival shows by the Fregolinos

The Fufa's meeting place and house open during Christmas 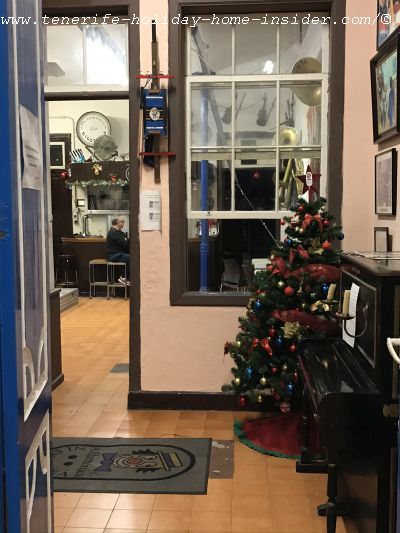 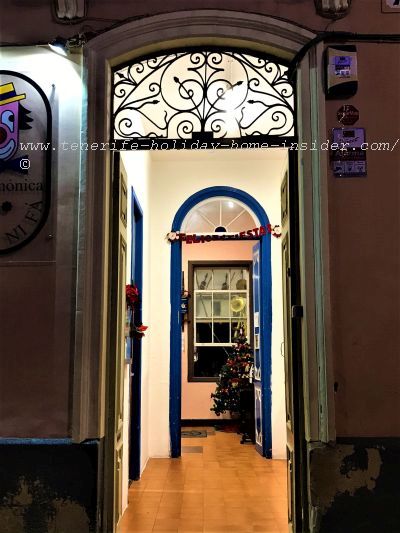 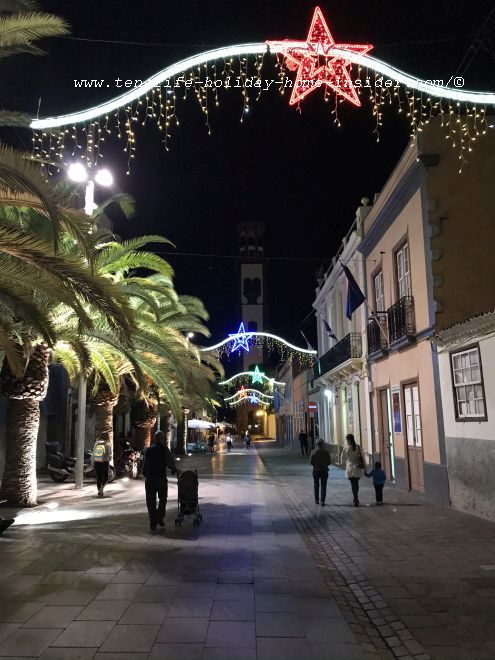 Outside Christmas decorations in the Tenerife Carnival street La Noria

This philharmonic club of former Murga (singing clown musicians) is loved by all Santa Cruzeros. Mind that it wouldn't be what it is today without its famous Don Enrique.

Don Enrique had already a great passion for carnival songs and music when he was eleven years old, way back in the Thirties of last century.

Then, he performed in a Murga infantil. That's a carnivalesque club for children.

When he was growing up, he often remembered a story about the good old days. Then in 1917, a group of sailors from Cadiz joined a Tenerife carnival parade. All those seafarers had huge moustaches, just like Salvador Dali. The burlesque beard was their carnival brand, as they were also kind of a Murga back home on mainland Spain. So they said.

That's the story that led to Don Enrique's brain child the Bigotudos. In Spring of 1954, they were in full swing.

The Bigotudos were like all clubs that also met behind closed doors, sometimes. There, their leader Don Enrique started to plot a new way to celebrate carnival when the Dictator Franco came to power and forbid it.

The end of the Bigotudos and a new start

In 1961, the Afilarmonica Nifu Nifa organization was founded together with the first Fiestas del Invierno the Winter Festivals.  Fufa short for Nifu Nifa made it clear that it operated with a Carnival spirit. 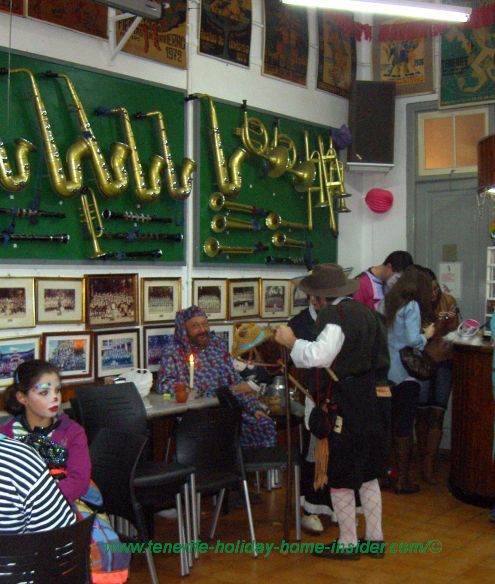 Wind instruments played by the Fufa adorn its walls. None of them look like the former Murga's first ones. They are said to have been made of cardboard, until PVC was invented.

Young club members who sing Carnival Satyre are also welcome to this social meeting place the Fufa.
In fact in 1972, Don Enrique helped to found the first competitions for the Murga children groups. 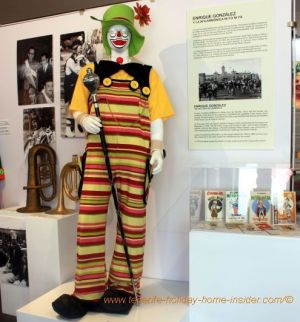 Don Enrique in 2010 with his last carnival costume

It takes you to the House of Carnival in Santa Cruz.

Learn all about this place that holds so much fascinating Tenerife history about the era  of Don Enrique.

There were the Fiestas del Invierno and much more.

The Fufa carnival club stops being a Murga

This occurred in 1965. Then, the Afilarmonica Nifu Nifa  wasn't allowed to compete any more with other Murga. Nevertheless, all Chicharreros (nickname for Santacruzeros) loved it as the for-runner of all carnival groups that sing songs that criticize everything that happens.

Even today, this Afilarmonica has its own locations where it performs besides the Recinto Ferial. For example, find it at Parque de los Principes by the Church Iglesia San Francisco downtown in the capital or at the Santa Cruz Friendship circle of January XII. This elite club where El Carnaval plays a big role existed already in 1855.

Also note that this father of the Santa Cruz Murga who passed away in 2010 is now man of honor, more about whom

in Spanish available only

Underneath click for the 2011 Carnival song by the Fufa, as called by Santa Cruz Tenerife insiders...

- From carnival club back to friendship clubs of Tenerife -