Entertainment Tenerife Loro Park is one of top attractions. 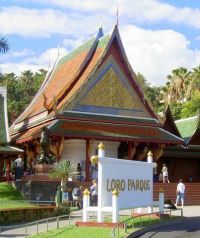 Entertainment Tenerife by the 60 000
square meter big Loro Park or Loro Parque
is much more than fun.

One of its most important goals
is to educate the young to care about an environment for all animals.

Of course, Loros the parrots are the park's priorities.

Since 2015, a captivating 3D animation film a short version of Santana's Rio movie has helped to make an impact in this context. 9 film shows in 3 languages give Loro Park visitors a glimpse of the story of Blu that represents the blue Spix Macaw. In fact, those endangered birds from Brazil's North Eastern Bahia were successfully bred by the Puerto Park after the year 2000 when non was supposedly left in the wild.

Indeed, if you were looking for Tenerife zoos, Loro Parque is one of a kind. Many of its creatures are trained to render excitement to humans.

Also, the park's 2nd motto besides environmental awareness is geared towards better animal health and happiness. 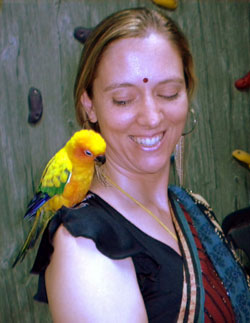 Small loro parrot Sun Parakeet
See this amusement park's thrilling shows between half past 8 a.m. and 6.45 p.m.
(No more entrance for general public after 4.p.m. unless holders of VIP and similar privileges.)

It provides several performances per day where not only big birds called Loros amuse you. Many a big and small Loro, such as the depicted 'Sun Conure' or Sun Parakeet from the Northeast of South America is there. Many of them are just as friendly like the portrayed colorful parrot which is now threatened by extinction, by the way.

What are the park's main entertaining actors?

Comments of Ciao España are proof that you will not get bored with entertainment Tenerife at Loro Parque.

Once inside the aquarium building you will meet up with penguins in 2 glassed-in enclosures.

There, the more than 200 funny black and white birds are happy fellows on 12000 kg of genuine ice. Real snow flakes are showering them, from time to time. Also, some of them had babies not long ago.

They are indeed entertaining clowns by the way they stalk around like dressed up in tuxedos and, by the comical manner in which they behave.

The aquarium with its diversified fauna is a treat but, now pay attention to the sharks behind the glass.

That's more like a spooky show in the low sparsely lit passages.

Who will find Loro Park entertaining? 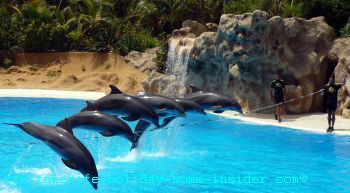 Look at the picture... See how high they jump over the rope above water...

If there were Olympic Games for dolphins in stunt shows, they might fetch a medal. 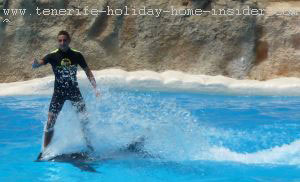 Loro Park Show
Look at this photo Loro Park show where a skilled performer stands on top of a swimming dolphin!

To do this would be risky with Loro Park's Orcas, in my mind.

However, many think that the Orcas show is worth every penny to watch from so close.

One of the Orcas hit a trainer girl with its mighty fin by accident. She broke an arm in the process. It is said that the orca brought her up to the surface after the incident. That would be normal behavior of Orcas during entertainment training.

You see, entertainment Tenerife can come at a price for its trainers who are also the stuntmen at Loro Park.

A deadly, unfortunate accident happened on 24th of December 2009 in one of the Orca pools, which hold 22,5 million liters of often changed Atlantic water. The eldest, 14 year old show Orca called Kito caused death to its trainer. By the looks of it, its play suddenly turned rough, while Kito was trained for fun stunts. Alexis was knocked hard. The Orca submerged and left him on the bottom of the 12m deep basin. There, its trainer for Loro Park fun drowned without broken limbs or bite marks. There is no proof that the young Alexis Martianez Hernandez from Los Realejos had pushed entertaining criteria to its limits just before the fatal moment. By the way, he had been employed on the spectacle Loro Park scene since 2004, but had only worked to create fun with killer whales since 2007. Anyway, the park's management announced that Orca shows will go on. But no more trainer show artists allowed in the pools from now on...

In my mind, much amusement in Tenerife is also provided by those powerful mammals - when they perform all by themselves.

They are a group of males only.

Females would cause fights.

The leader which is the biggest is pulling off his own peculiar attraction stunts, at times. 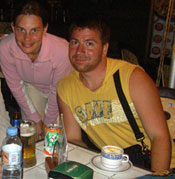 Every year, the park which is famous for the world's biggest collection and preservation of parrots, invites overseas students for practical studies and veterinary education, such as the two Loro Park students from a German university, who are depicted beside.'Students are normally full of praise for the park's entertainment Tenerife, concern for the environment and love of ecology', they said. I met them over Christmas in 2008.

The Loros or, parrots are the basic theme of Loro Park.

This attraction presents some of them in a very sweet educational way besides proper parrot shows. A vet talks to some of the birds and explains all kinds of special treatments, which they get for all kinds of reasons. It's all done in a very amusing fashion.

Look at the new stunning aviary design Loro Park Puerto de la Cruz. This outside aviary has high palms and big trees inside. There, follow the happy free flight of special birds
which are not Loros. They also contribute to entertainment Tenerife in their own way. Loro parrots are too destructive with all plants.

I could watch this amazing aviary construction from the street in 2009. The gigantic metal structure is a high pitched bird house called Katandra Loro Park. Certainly, its netting which looks like shade cloth is made of rather durable material. This whole aviary see through dome was designed to withstand gales and to let a maximum of light as well as air enter from all sides. The Katandra free flying birds contribute to entertainment Tenerife by their exceptional beauty or size.

Discover all about the world biggest parrot conservation which is in Tenerife Puerto de la Cruz of Spain, where also find a Bolivian parrot which is one of world endangered birds.

Behind the curtain tour show

Also, do the Loro Park tour behind the scenes called Discovery tour...

You'll learn funny things like how the gorillas make their own beds with palm and banana leaves at night in their indoor sleeping quarters. It entertains the mammals with useful activities which makes them feel at home more.

It's engraved in my mind as the tour behind the scenes
or curtains because, it's so much fun.

Price: €9 for adults and 6 alternatively for kids over 3 years of age. 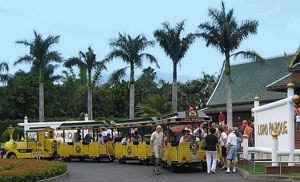 Loro Park mini train
A small Loro park train is included in the entrance price just like all shows, except for the discovery tour, while the ticket cost may fluctuate with time.

Entrance for non residents to Loro Park entertainment kingdom costs about €31 for adult non residents and for residents €19.
children €12,50
Annual cards at much reduced prices are also available.

Hot tip: Lets suppose that you have a large family and you want to save on Loro Park entrance. Look out for stationary shops or shops called estancos ... You will get tickets a little cheaper there.

But, when on short holiday, while what is short is the big question, rather book Loro Park, beforehand...

You sure wouldn't want to miss out on this spectacular entertainment Tenerife.

Do you have a green Europe residence document, which you got from the police besides your NIE ID document? Show that together with your empadronamiento from any local town hall Tenerife, where you are registered, and score cheaper Loro Park tickets, for example...

You can hire a scooter from Loro Park to better get up some of its steep pathways.

It gives the Loro park visitor a free leisure tour through town for about twenty minutes, twice.

The train can also be taken in Calle Venezuela Plaza de los Reyes Catolicos near the Lago Lido Martianez which is renown for different fun.

Off recently, Loro Park introduced surprising Halloween treats for some of its animals. This means new shows with simple, little details where some unusual food is presented to them once a year.

Always new excitement at the Puerto de la Cruz Zoo the best of Europe as well as of the world.

In fact, Tripadvisor visitors have voted the Loro Park Zoo as best and therefor as Number 1 in the world. In the future you might find a truly entertaining, temporary addition at Loro Park. Its speckled Jaguar aged 13 looks like having fallen in love with a 9 year younger black cat of the same species. Expect lovely genuine entertainment Tenerife in 2010 by a happy Jaguar family... Animals of the cat gender like jaguars too, are so exhilarating to contemplate when they are very young.

By the way, Loro Park has extended its tortoise collection by adding 10 Spur tortoises from Africa, which are its biggest land tortoises.

The park's many focal points are fun to capture on lens for every amateur as well as professional photo hunter. This was published in a German Tenerife magazine in connection with one of best photographers of camera brand Nikon. The man who is also biologist, recently, took many shots there while also being interested in Loro Park's amusements and shows.

Loro Park, apparently started off with only some parrots on display, way back in 1972, when my buddy Guenther came first to the island. He says that kind of a humble shelter, where one could see them looked rather lost on a relatively huge terrain. Entertainment Tenerife of the park of the Loros has gone a long way since then and its space has more than quadrupled.

A fact is that the Puerto Cruz parrot zoo provides unforgettable good time. There, visitors also arrive from surrounding Canary Islands to enjoy it.

In this context don't forget whales and dolphins in Tenerife in their natural habitat and see their entertaining behavior with many photos...

By the way, some whale and dolphin shows in the world were black listed in 2014 by ecologists but, the Tenerife parrot park was not one of them.

Tenerife's Loro Park introduced ant bears to its animal kingdom. Water pigs seem to be new there also but, I am not quite sure what they are. Can somebody please inform me?

From entertainment Tenerife back to Tenerife attractions where Loro Park has been the oldest after Carnival.