Whale watching near Los Gigantes is a hands on experience which lifts the mysteries of ocean and beauty of our world.
Seldom may we feel so much part of it than out there in the wild. A chance to even touch an inquisitive playful young animal is always present.

Left overs from served lunches go over board when you are on a boat where tourists watch whales. The discarded food attracts small fish which in turn draw the attention of big ones. And, already come the dolphins or whales, too, provided they are in the neighborhood which is normally the case.

Whale watching Los Gigantes
The ocean is deep here which is important for whales.

It goes down 30 meters, already by the giant cliffs
by the shore.

Also, marine life by the volcanic
island is very rich for its depth as well as the volcanic mineral enriched quality of flora under water. Hence, more little fish and food for the larger cetaceans.

What whales are there?

36 species of whales that have been spotted between Tenerife and La Gomera know that and, therefore love the area.

Some of them were Beaked Whales and Sperm Whales.

What difference makes the ocean temperature?

The temperature is just a fraction warmer where most whales are by los Gigantes. Why? It's closer to the golf stream.

As temperatures are rising all over the world more and more unseen species are showing up between Los Gigantes and La Gomera. The recently seen Tiger whale in Spring 2008 was one of them.

Why so many pilot whales?

While on a whale watching trip with a glass bottom boat you might see squids. They are frequent there. You will see mainly Long or, Short Finned Pilot Whales called in Spanish Calderons under as well as above water which all prefer to feed on squids.

Those cetaceans have 30 to 40 teeth to do so. They appear in a silver gray to a dark brownish gray color. Males have squarish heads, females more chubby round ones.

Pilot Whales are actually part of the oceanic dolphin family. 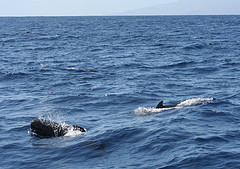 Pilot whale blows by Tony Hisget
Whales have lungs and can't breath through their mouth. In the front or
by the back of their heads they have blow wholes just like nostrils. When on
a whale watching trip you often see a whales blow air in a gushing explosive manner when coming up from the deep.

This reminds me sub marines. It's so peculiar.

Want to know more about the whale who gives birth like a human?

About 6 to 7 (20 feet) meters is the maximum Finned Pilot Whales males reach in growth and it's 3 tons in weight. Females get 4-5 meters long with half the weight but, may reach 60 years of age. A young Pilot Whale has about 100 kg at birth and is born with flexible fins. 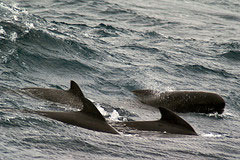 The incredible social life of whales

While observing whales in Los Gigantes you will notice large male whales outside groups called pods. They are the prime pod guardians.

Male whales don't abandon groups unlike old elephants do, by the way. Mind elephants would be the only large mammals that seem to have a long term memory like whales which lets both animal species migrate to far away places. The elephant does this when in need of a mineral found in specific rocks.

The Atlantic ocean around the Canary Islands certainly has different minerals in its volcanic micro life, as well.

Here again, teenage female pilot whales look after younger ones together with whale cows (just like is custom with elephants). This is a mother instinct also particular to whales. 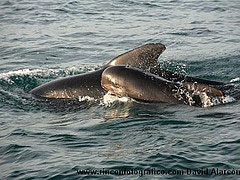 Pilot whale flirt by David Aracón
When whale watching near Los Gigantes you surely will remember
Mobi Dick the giant old blue whale whose memory was as good as that
of its hunter who hated Mobi in the most personal fatal manner.

Yes, this can't be all fiction.

The story must be based on sailors' and hunters' stories.

The giant mammals are intelligent. They were able to survive for millions of years. Most of them know all oceans and seldom get lost. 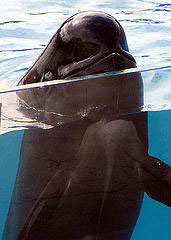 What about stranded whales?

There are incidents where some get stranded on foreign shores. Near the West African Coast some were spotted as lost. The fact that they get beached is often a puzzle for us humans. I've seen several such incidents in South African TV. Single whales were lying on the beach facing inland in South Africa as well as in California USA. It's amazing to watch human effort when they try to turn them to get them back into the deep.

It's surprising that no whales were seen stranded around Los Gigantes.

I've been whale watching in Hermanus in June, some time ago.

www.whaleroute.com/areas/southafrica informs us that the migrating Right Whales come by the year to breed in Hermanus. I could see them there at a distance of 10 meters while sitting by the shore.

It's sad to remember how those cetaceans have been hunted and exploited like Mobi Dick for centuries. They still are. Some countries still allow it.

Have a look at the most popular Tenerife tourist entertainment. Meantime Tenerife whales attract more than half a million tourists each year. Seeing cetaceans like dolphins and Orcas, there, is in stark contrast to watching whales in the wild.

Of course, whales are not hunted at the attraction park.

Whale watching by myself

Indeed, I have seen whales in the wild in different areas by Capetown, mostly.

Mind, indigenous people like the Inuit (Eskimos) in arctic areas have hunted whales. They have needed blubber to survive winters.

Nowadays, tourists are in hot pursuit
to shoot photos and videos.

Many organized tours provide adventure travel for it world wide.

It helps to watch the well being of whales in order to preserve them as endangered species. We owe it to them, as they suffer of neglect to our environment. All must be done to protect whales from extinction, as nature too may wipe out an entire species, such as happened to this giant prehistoric shark which once had a habitat by Tenerife.

Ziphidae species that easily reach a size of 5m were last found stranded in 2004 due to Radar that had been used by the NATO navy since 2000. This dilemma made the military stop its exercises in the region. The Zifio is a shy whale that may dive as deep as 1200m and stay under for an entire hour without the need to surface. These cetaceans with their beaked noses approach Tenerife coasts but usually prefer those of El Hierro.

Submerging whale-flipping tail
Meantime, nobody would disagree nowadays that whale watching is also worth it because of the beauty of the largest creatures called whales. Mind that the most beautiful sight of a submerging whale, flipping its tail as depicted beside, warrants protection in its habitat.

We also owe it to humankind to watch the whales' well-being because, we need a healthy ocean to survive.

Neglecting the ocean is terrible. The whale ocean travelers merit all our respect.

There is no best time for studying whales off Los Gigantes. The only time when they hide is when warm dusty Kalima winds blow over from the neighboring hot continent Africa.

Whales converse with sometimes funny sonar like sounds that resemble clicks or, a mixture of high frequency screech sounds or whistles. Whales can communicate under water over very large distances which may be compared to broad band transmission. Unfortunately, this information has disappeared but here are just whale sound to listen to.

In my mind more should be done to encourage eco tourism in the far north of our globe where different whales live. I know that this is easier said than done.

Native people don't always want to give up their life styles.

Any tours to watch the whales?

Please, have a look at some day trip operators to get you out onto the ocean to experience the whales. Timetables are included...

A few of the southern beaches like by Puerto Colon apply, too.

From whale watching back to Los Gigantes

A tribute to endangered species

Visit a tribute to endangered animals such as whales at the whale fossil free open air museum Tenerife which only displays one item, big enough though, as is...

Los Gigantes should get credit for having started on some sort of whale migratory museum in November 2012. Wouldn't it be lovely as a permanent feature of the town? Should you be be concerned about danger to the environment of whales and dolphins, please, read more information and find out at www.wdcs.org/ how to help.