Tenerife day trips to the whales out on the Atlantic may happen more than once a day.

Tenerife day trips in Los Gigantes for whale watching are a must for wild life adventure on the biggest of all Canary Islands.

Tour companies take their boats out 2 and 3 times a day at times. That's how popular the trips are.

Often they go near La Gomera which is the island fairly opposite the town of the giant cliffs.

Also, whales like to navigate far. At times, the skippers need to find them. When whales are in the neighborhood they will approach the boats soon. They are inquisitive fellows.

Usually lunch gets served on the boats or in Masza Bay. The left overs often are dumped overboard which also attracts the cetaceans.

And, they do come.

Some people have even had the chance to touch a whale. It's the youngest of the pilot whales that are the most friendly. 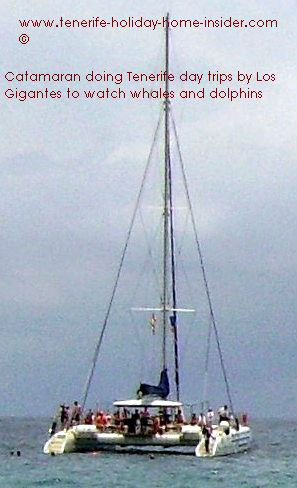 The advantage to see cetaceans with the operators above is that they know the locations where the creatures are. I once went on a private boat tour along the Tenerife coast stopping in Mazca Bay which was very exciting, but we saw no whales and no dolphins on that day.

Certainly, the type of boat which is used for such Tenerife day trips also plays a role. A noisy engine is most likely to scare the cetaceans.

A tourist's encounter with sea sickness

A friend told me just now that he went with on a boat that was dancing the waves like a nut shell when going for watching pilot whales in southern Tenerife. They saw eight pilot whales in February 2008 but, what good does it do when your stomach turns with every move of the boat? Its shakes did nothing to him, though.

What was the trick?

He said that you must look at the horizon when no whales or dolphins are there, as not to get seasick.

Tenerife day trips with well suited boats for ocean excursions of whale and dolphin watches make you save the money you might have to spend at the chemist, later, or, sure, even, before.

Indeed, there are times, such as during Calima dust clouds from Africa when ocean mammals that normally surf to the top go into hiding.

No guaranty is given for time tables or telephone numbers, either. Sometimes a whale watching craft stops operating. More and more new ones appear, however. Meantime, the photo safaris in the South of the Canary Island with most whale and dolphin watch tours are becoming more and more popular.

Whales and dolphins may be part of another adventure trip

Encounter a form to apply for information for a longer Atlantic safari tour for swimming with turtles which is in the context of a private boat trip by the giant cliffs.

Day trips to sea the giants of the sea elsewhere

Don't miss out on daily whale cruises in the future, as I did in Hermanus South Africa to see Southern Right Whales as portrayed by this video.

From Tenerife day trips back to whale watching off Los Gigantes with lots of pictures and much info on the ancient mammals.