The Muelle Puerto de La Cruz is called Muelle pesquero by the locals which means fisherman quay. A fraction of it goes back way before its port started to prosper after the eruption of Mount Trevejo in 1706.  In fact, El Cabildo de Tenerife gave the order to Araotava (Orotava) to build a Muelle on first of December of 1506. It was one made of timber which could not stand up to heavy storms. Again and again, it had to be repaired. Eventually, it was rebuilt in more durable ways with bigger piers. 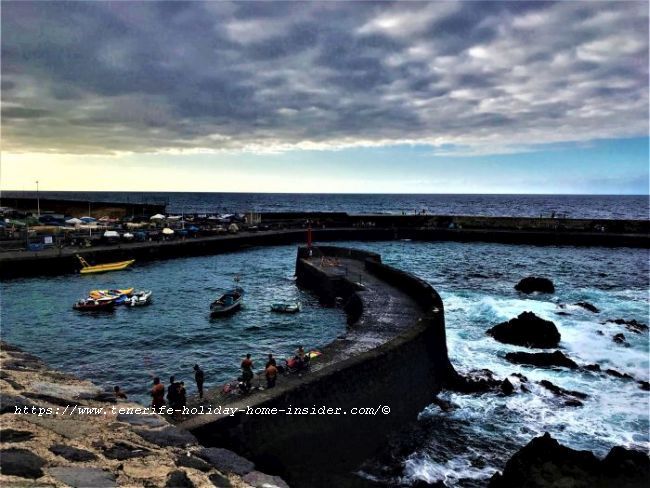 Muelle Puerto de La Cruz a place loved by the town's people, as seen on August 31, 2019 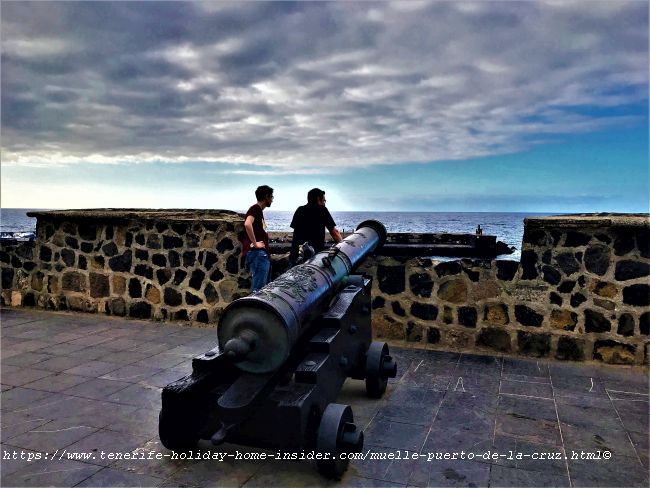 Later on, not even the steamboat era with its heavy trade business could wipe out its fishing dock charm. Tourists like Alexander von Humboldt, Hemingway and even Churchill were enchanted by it. 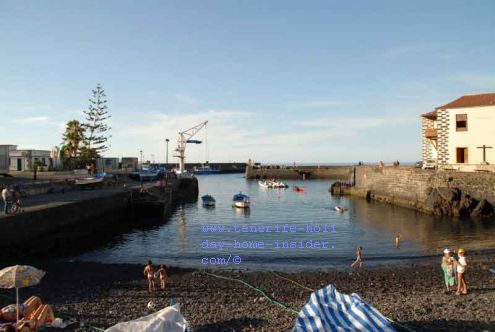 In fact,  aviation mass tourism that started in the Seventies last century helped to keep it idyllic, except the modern apartment buildings that don't fit the style.

Big hustle and bustle stopped for good. Big ships stayed away. They had no more interest to enter the cozy bay. 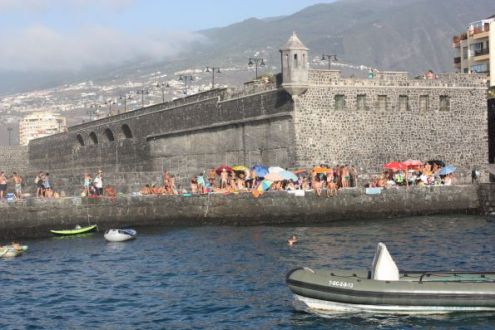 Muelle Puerto de la Cruz with the gigantic old fort La Bateria Santa Barbara a stark contrast to the idyllic bay where it is.

However, historic landmarks, such as the impressive old fort still remind the days of yore when pirates were a threat in the pulsating port after 1706. 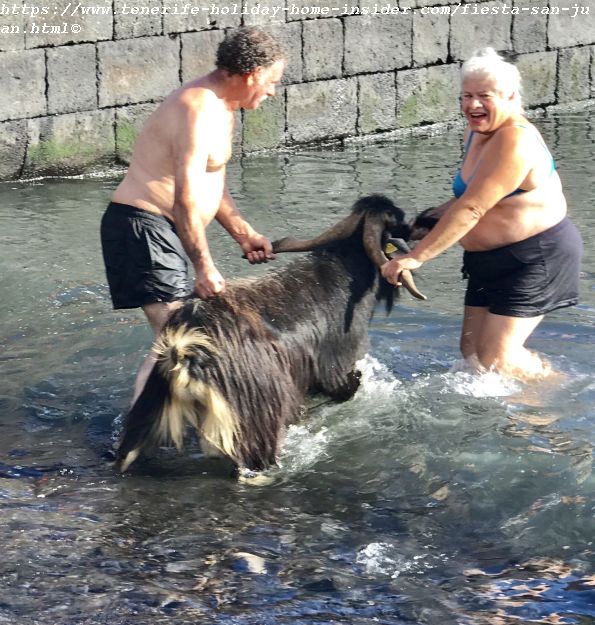 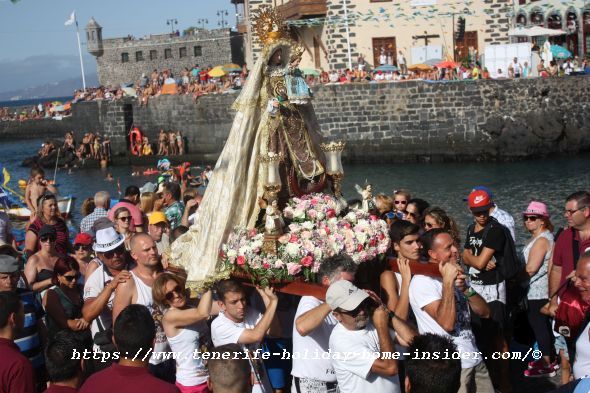 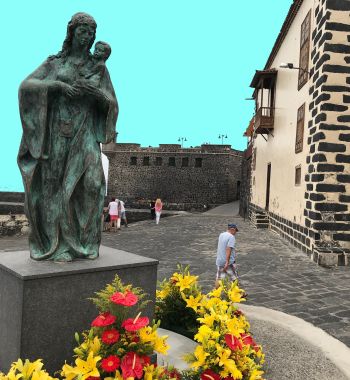 Muelle monument statue by Rodrigo Rodriguez of Nuestra Señora del Carmen the patroness of Puerto de la Cruz, of its harbor, and its fishermen 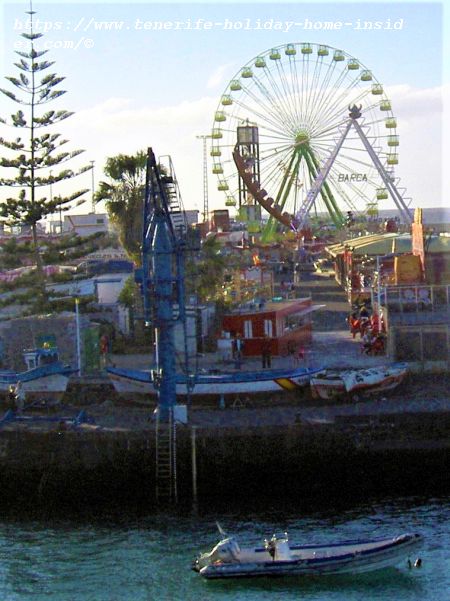 Many Fiestas by the Muelle Puerto de la Cruz such as Fiesta del Carmen and fishing competitions, as seen here became a new order of the day. By the way, El Carmen's ocean ride the main and one of a kind a Puerto de la Cruz celebration will be earlier in 2019.  It will be on Tuesday July 16 soon after the 6.30 mass. 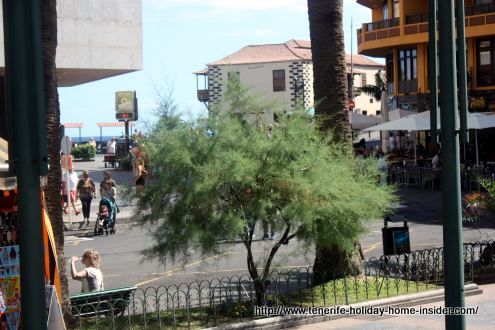 There is constant coming and going between all breakwaters of the Muelle. Almost a stone throw from it is also its free parking ground by the lighthouse. 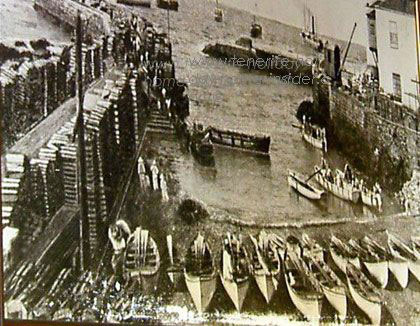 Old photo of Puerto Cruz the harbor in Tenerife North.

This quaint port with its docks and jetties that's best depicted in this old photo has been like a motor that drove on progress. Education, art and culture followed suite. Hence, there are further assets by the Muelle. Those are two museums, one for contemporary art and one dedicated to the ships and marine life. The Cofradia restaurant and a beautiful  souvenir and gift shop are beside the excellent tourist information office. All is in the Casa de la Aduana which isn't only the oldest building but also a jewel of the town. 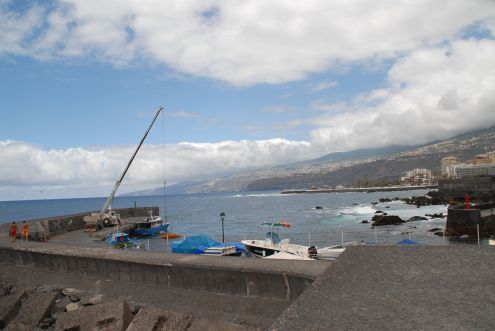 The interesting photo above shows an important but seldom seen part of the Puerto Cruz harbor that is adjacent to Plaza de Europa behind the Castillo the former Defense-Fortress. 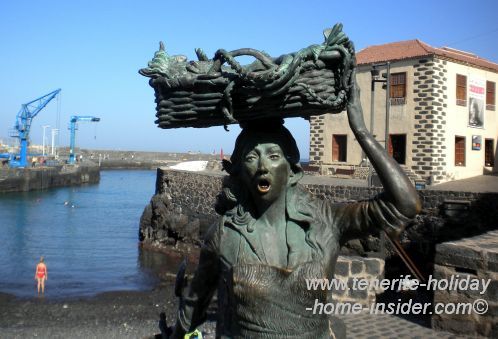 The humble fishwife who is portrayed in the picture above contributed to the Muelle's economy in her own way. Note the cranes in the drydock of the Muelle. Shiprepairs are still done there. Also, the cranes often pull a boat out of the water.

The crab breakwater of the Muelle Puerto de la Cruz.

The jetty that's portrayed below is almost 200m long. This  sturdy dock is a part of the Muelle. It's fortified with concrete boulders which forms the port's crab habitat. It must be made more safe. 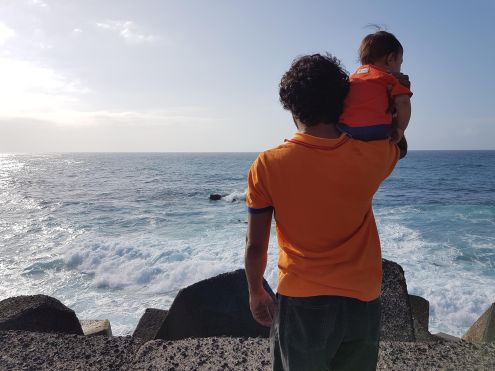 A father must be able to climb with permission onto the pathway of this jetty to show his child how the Atlantic's wild and wonderful waves attack the town there.

Properties in the first line behind the waterfront.

That's the road with houses that are closest to the Atlantic where the man with the child is standing. There, real estate prices are bound to go through the roof,  soon.

The remodeling of the Muelle to turn it into more than just a Marina will cause that. More tourists are bound to arrive with cruise liners as well as with private yachts. They will visit the top attractions that the town will have to offer.

Could there be a downside to a new Muelle Puerto de la Cruz?

There isn't much space by this section of the Northwest coast where you encounter a surf and an onslaught of dangerous waves that are not to be ignored.

There also remains the question about eventual problems that big cruise liners may bring. Mind that many are passing through the gigantic German harbor of Hamburg. "Their Diesel is polluting", the residents say. Also, their tourists are said to spend far too little on land to make a worthwhile difference to the economy.

Picturesque looks by the Muelle that must live on.

Not everything modern is good. The past has values that are priceless. There's a reason why many European towns  have laws that forbid modernization, as not to destroy character and flair. Florence is one of them, by the way. There are countless more. 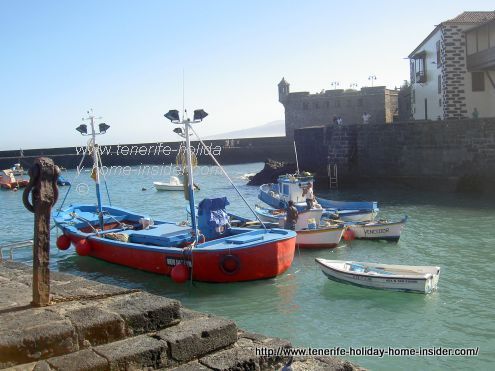 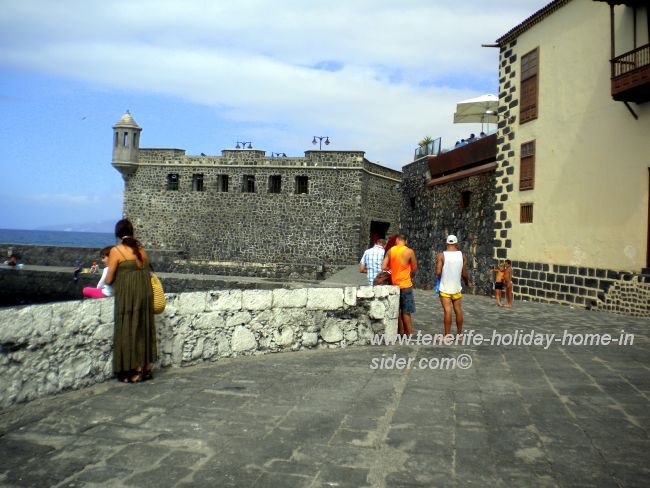 Old fort with canons against pirates. 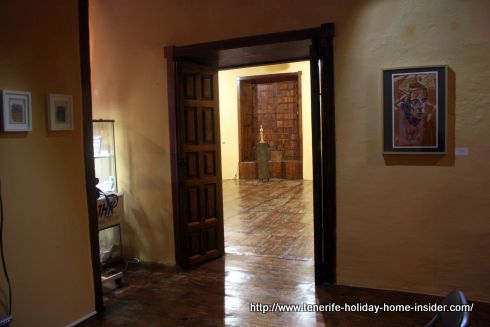 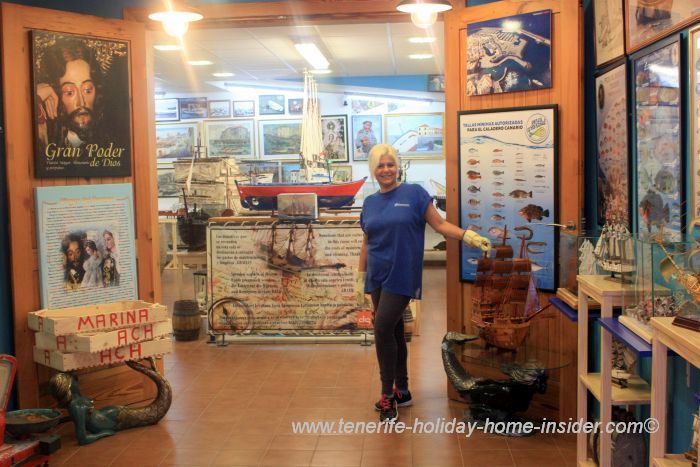 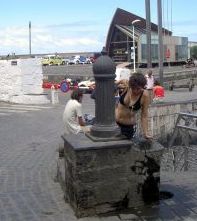 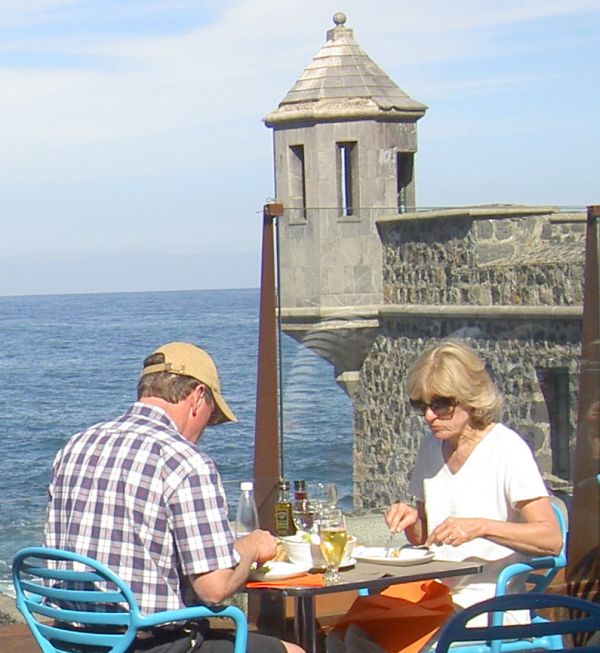 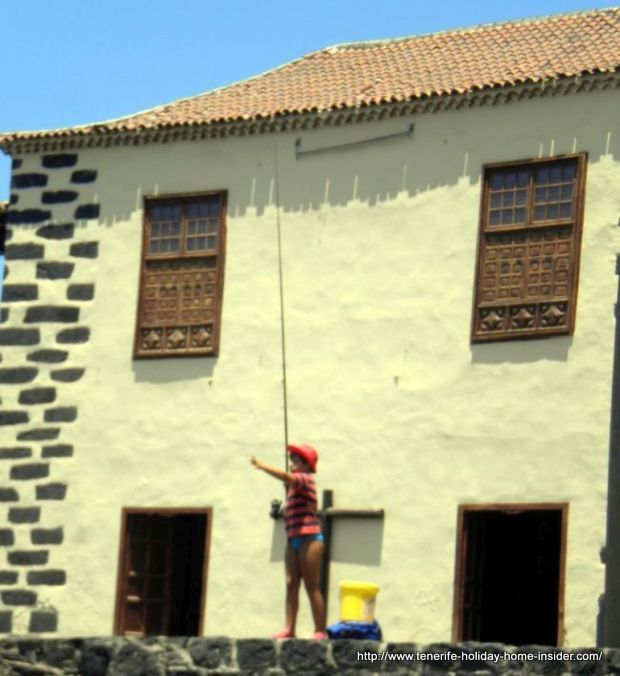 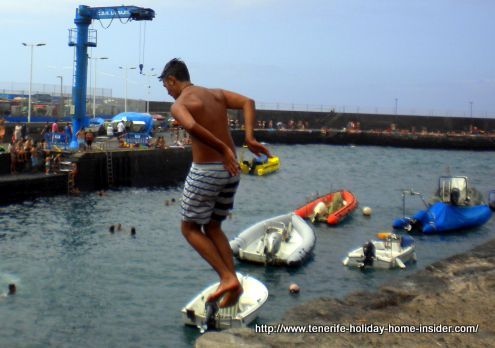 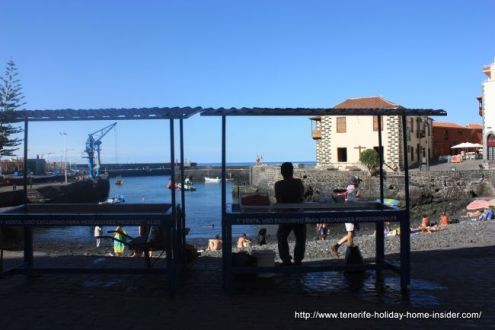 There's still wasteland that has been a thorn in the eyes of walkers along the Muelle, but less for its looks than for the discomfort it brings for walking. 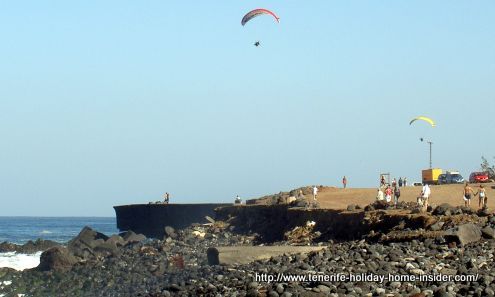 Wasteland by the Muelle lighthouse and parking grounds.

It's the stretch between the parking ground and Castillo San Felipe where the odd camper van may be seen. There, the terrain is rough and landscaping could improve much.

Latest news regarding a new fishing, sports and cruise ship harbor for Puerto de la Cruz by the government of the Canary Islands here.. I am very sorry not to have found anything in English about it.