The Fiestas del Carmen of Realejos San Agustin are most likely leading by their amount of activities.  Puerto de la Cruz certainly tops in Tenerife by the spectacle of the "embarcaciónes" the embarkments of the statues of San Telmo and Virgen del Carmen. Both are town fishermen patrons, while the Madonna sculpture of Realejos also figures as Patron of the entire Valley of La Orotava.
These events of Tenerife North are so important that a new posters and brochures are created by both towns year by year. 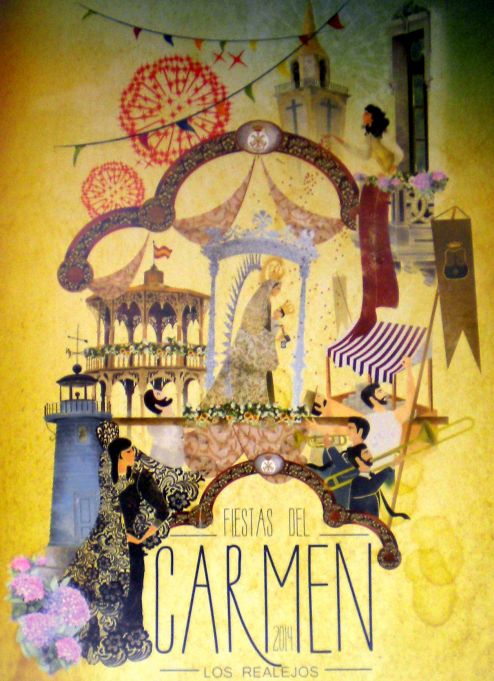 These celebrations are part of the Fiestas de Julio (July). They have their own Fiesta queens, while sports competitions also play a big role, above all in neighboring Realejos. Then, the latter's suburb San Agustin which harbors a Marian shrine attracts a magnitude of people while thousands spread all over the Puerto Cruz hub with its Muelle and its fishing hamlet La Ranilla. 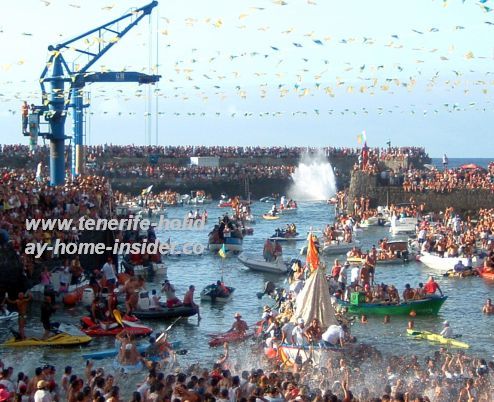 A second one the Chiquita takes place on Sunday July 21 by about 6.pm. Alternatively on July 17, 2022

Saint San Telmo or Elmo the fisherman patron is taken before the Virgin onto a smaller boat. The ocean journey may lead as far as Hotel Maritim if the Atlantic permits. The 10 small speed rescue boats I saw in 2019 will most probably escort the saint and the patroness for safety reasons. 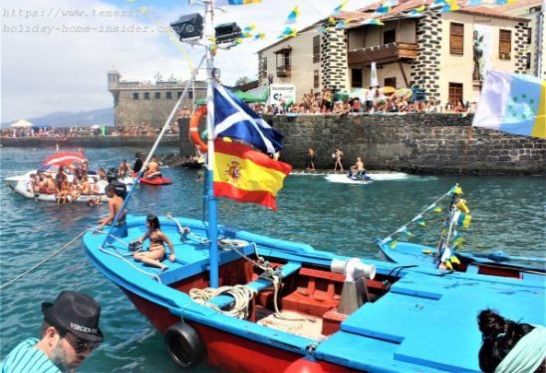 Wooden fishing boats of all sizes are seen at the Fiestas del Carmen in Puerto de la Cruz, both at the main and at la Chiquita event, while other types are in the majority 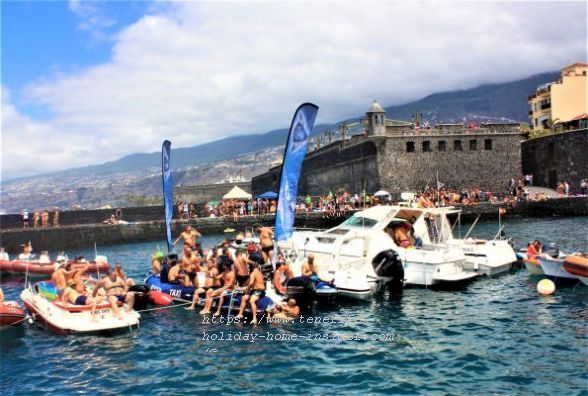 Yachts, boats, catamarans, and even a very large float may be present, such as in 2019, in the small port of Puerto de la Cruz Tenerife during Fiestas del Carmen

In fact, a large crane by the Muelle seems to be busy non stop to lounge boats in the port during the Festivals. Most likely, enough of their owners would rent mooring in the planned Marina of the port.

La Cucana or Cucaña  as spelled in Spanish is a five meter long greased wooden pole. It's attached horizontally by the Muelle three meters above the sea. It's just wide enough to place one foot at the time. It takes place prior to the lounging of the boat with the Fiesta del Carmen statue, on the same day. 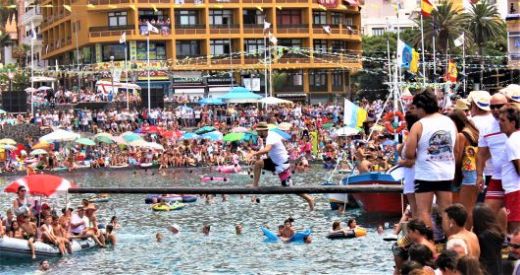 Cueing up for the Cucana contest are many Marinos on the pier in Puerto de la Cruz, while they watch one of their pals on the pole. He seems to have slipped already. 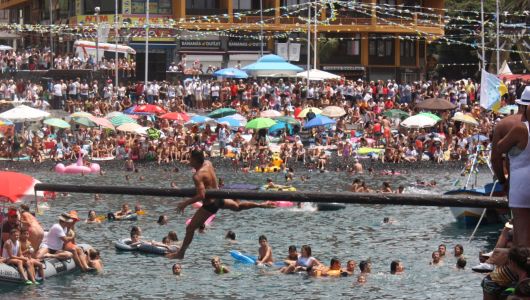 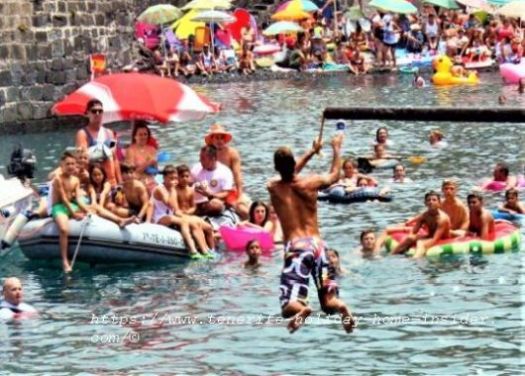 The Marineros will do their pilgrimage from Puerto de la Cruz to Los Realejos on July 24, 2022 for the Octava del Carmen.

Always click on small images to enlarge them more... 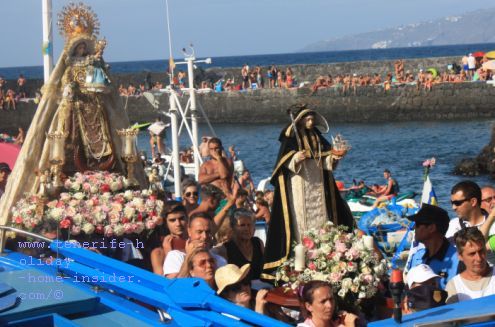 Why is there a Fiesta Chiquita?

The reason is historical and due to the fact that two  important Cofradias are involved. Besides, the Fiestas de Julio of July of Puerto de la Cruz last an entire month. Therefore, it's no issue to find the right weekend for it. Also, there could hardly be better beach fun for all age groups like at all Fiestas del Carmen of Tenerife North. 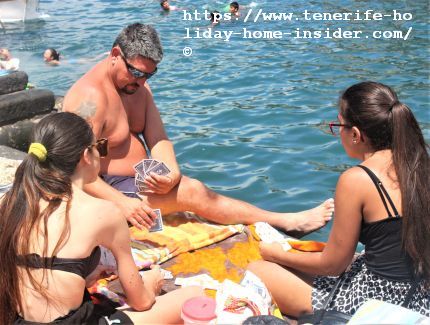 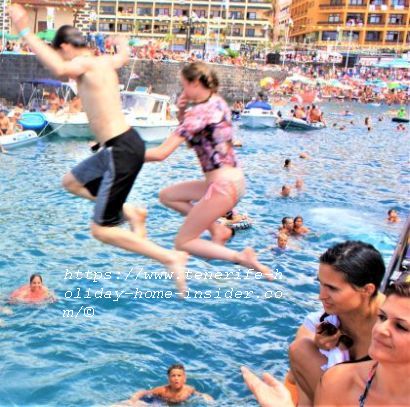 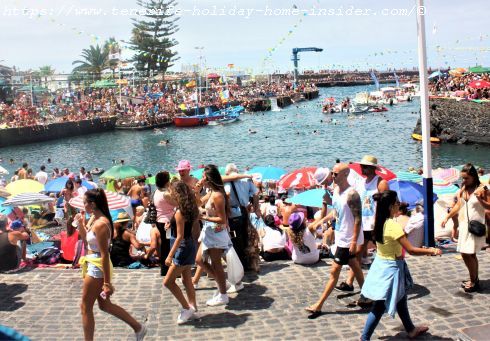 It's important to see and to be seen at the July fiestas in El Puerto.

Other Fiestas del Carmen with ocean rides in Tenerife

Praises are an important part of the Tenerife festivals del Carmen in Puerto de la Cruz. Of course, they are more impressing during the main event. Then, a live Television broadcast blends in the most remarkable acts, such as a father who raises his toddler to greet Our Lady of Carmel. Most emotional is always an Ave Maria that's sung by a opera celebrity. Nevertheless, some youngsters applause just for the fun of it. 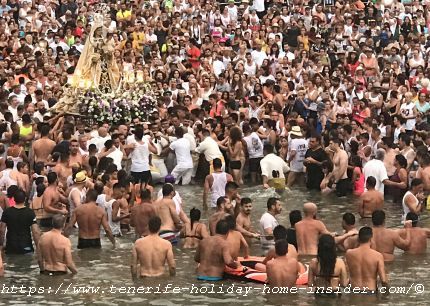 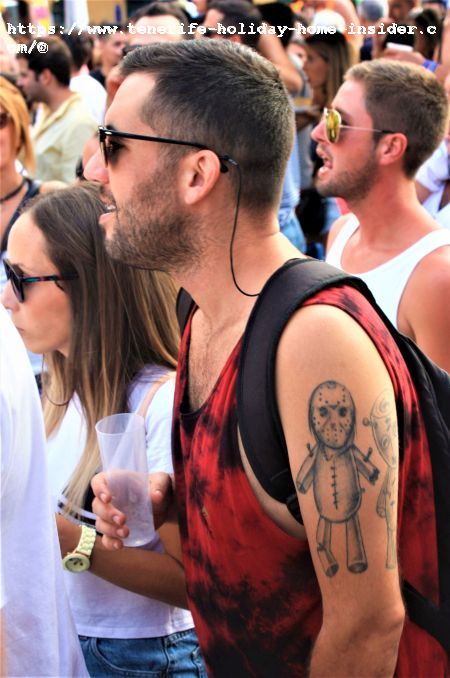 Young people of all ways of life are not amiss at the biggest fiestas of Tenerife North, such as es del Carmen. 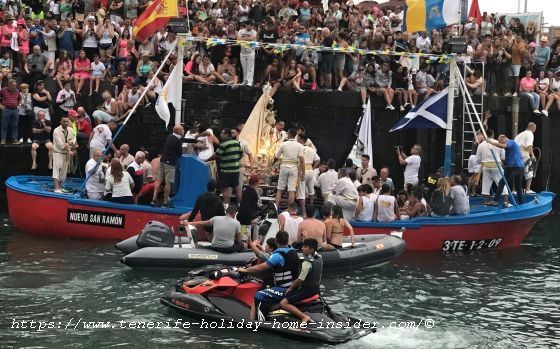 Fiestas del Carmen highlights, such as when the Marinos on the boat chant: "Guapa, Guapa, Guapa!"

Hundreds of cheering people of all age are knee deep submerged in the port's water near the shore during the loading ceremony.  They splash with amazing energy to also help the boat to get away. The island Bishop and town dignities are helped to get onto the boat by Muelle stairs, soon after. The small harbor is filled with powerful emotions that seem to gently vibrate on the ocean waves.

Unfortunately not.  Also, Police won't let anybody get onto the beach from a certain time onward and directs the pedestrian traffic toward La Aduana. At least, one can watch what happens from there on a big TV screen opposite. 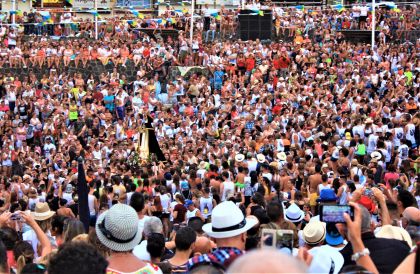 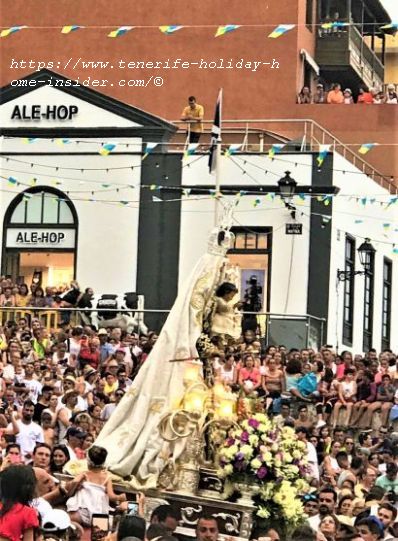 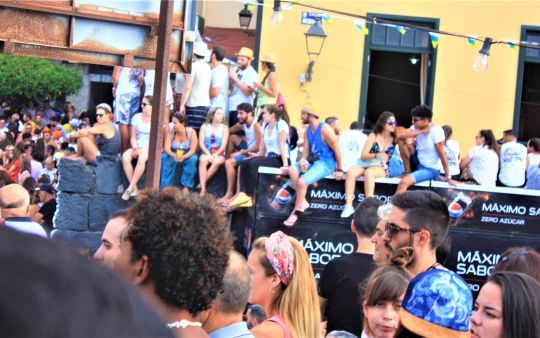 When space is rare and priceless, you wonder how youngsters got onto high walls to have the best views

Reina del Carmen 2017 Jazmin Puentes de la Muñoza had a true regal personality and was elected with total majority. Below she is depicted during the street procession of that year while the Marinos who carry the Madonna and San Telmo are in the photos next to her. 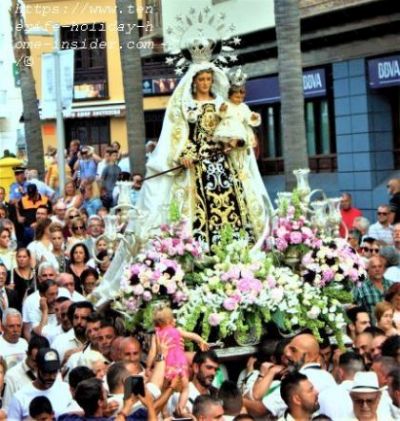 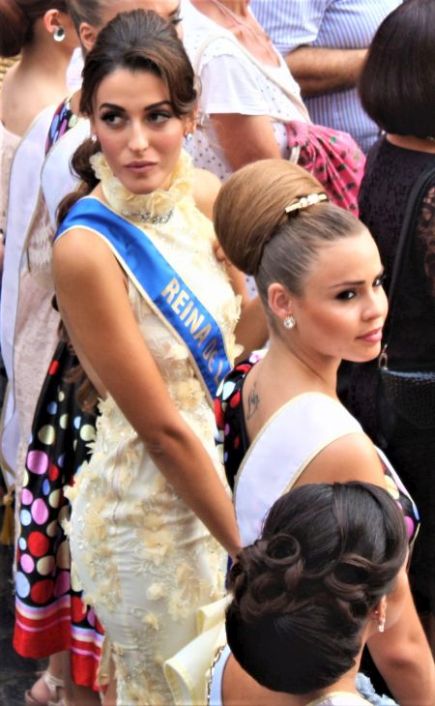 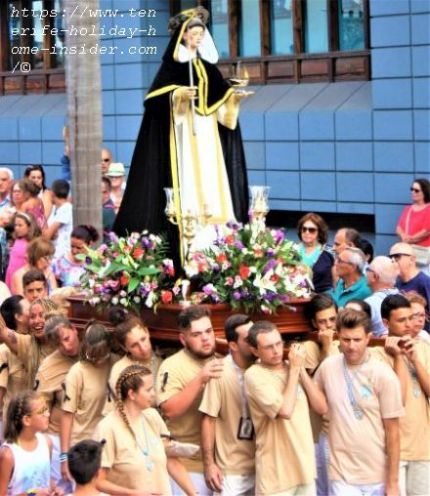 Meaning of Fiestas of our Lady Mount Carmel worldwide 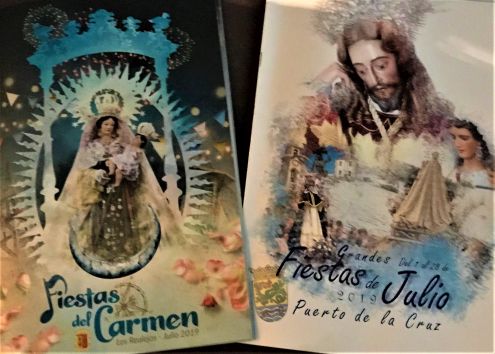 Fiestas del Carmen that always join hands on one particular day in Los Realejos a tradition that goes back to 1750. Mind that the celebrations in Puerto de la Cruz are slightly more tourist orientated and are promoted as Fiestas de Julio of July, nowadays

It is this fact of brotherhood that excels the Fiestas del Carmen of the two neighboring municipalities. In 2019, on July 28,  the Marinos the sailors of El Puerto start their yearly pilgrimage to San Agustin a suburb of Realejos by the port at 9 a.m. That's most likely also the day of the Realejo Potato Papa Bonita events. 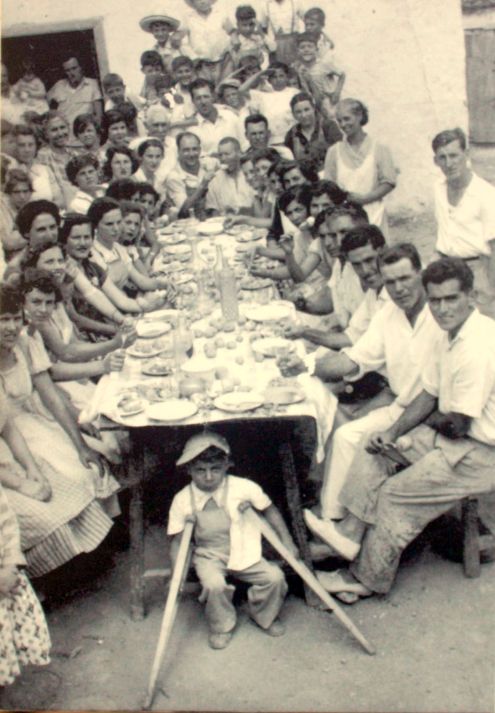 Here, it must be mentioned that the so called Marinos of Puerto de la Cruz have been traditional bearers of the Marian statue of Los Realejos since about the middle of the eighteenth century. They never stopped the habit when they had a beautiful Madonna of Carmel themselves. This turns this event into one of the most remarkable of all Fiesta celebrations in Tenerife. 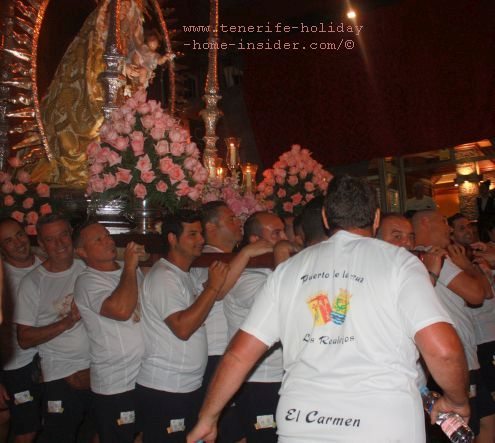 Puerto de la Cruz Marinos of the extraordinary Fiesta del Carmen alliance with Los Realejos that has existed for more than 250 years.
More captivating, amazing information and photos about the Marinos of El Puerto not to be missed

Needless to say, merry dancing, good food, wine, folk songs, Zarzuelas and balls of the Magos play a big part during the Carmelite Fiestas of Realejos as well as in Puerto de la Cruz.  Then, the Hermandades  the brotherhoods, the Cofradias as well as the Marinos chant their peculiar short praises besides the "Salve Maria" year after year during the processions. Mayors from both cities join each others processions. Guardia Civil police from as far as Icod de los Vinos puts up a prominent show for the safety of the towns. 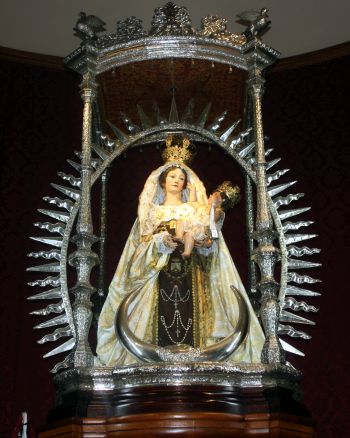 In 1725, the wealthy congregation of Realejo Bajo became owner of a most beautiful wooden statue of the Virgen del Carmen made by Antón Maria Maragliano of Genua.

In 1901 a Royal order from Madrid declared Our Lady of Carmel patroness of Marine trade and all seafarers which inludes the Royal Spanish Armada. 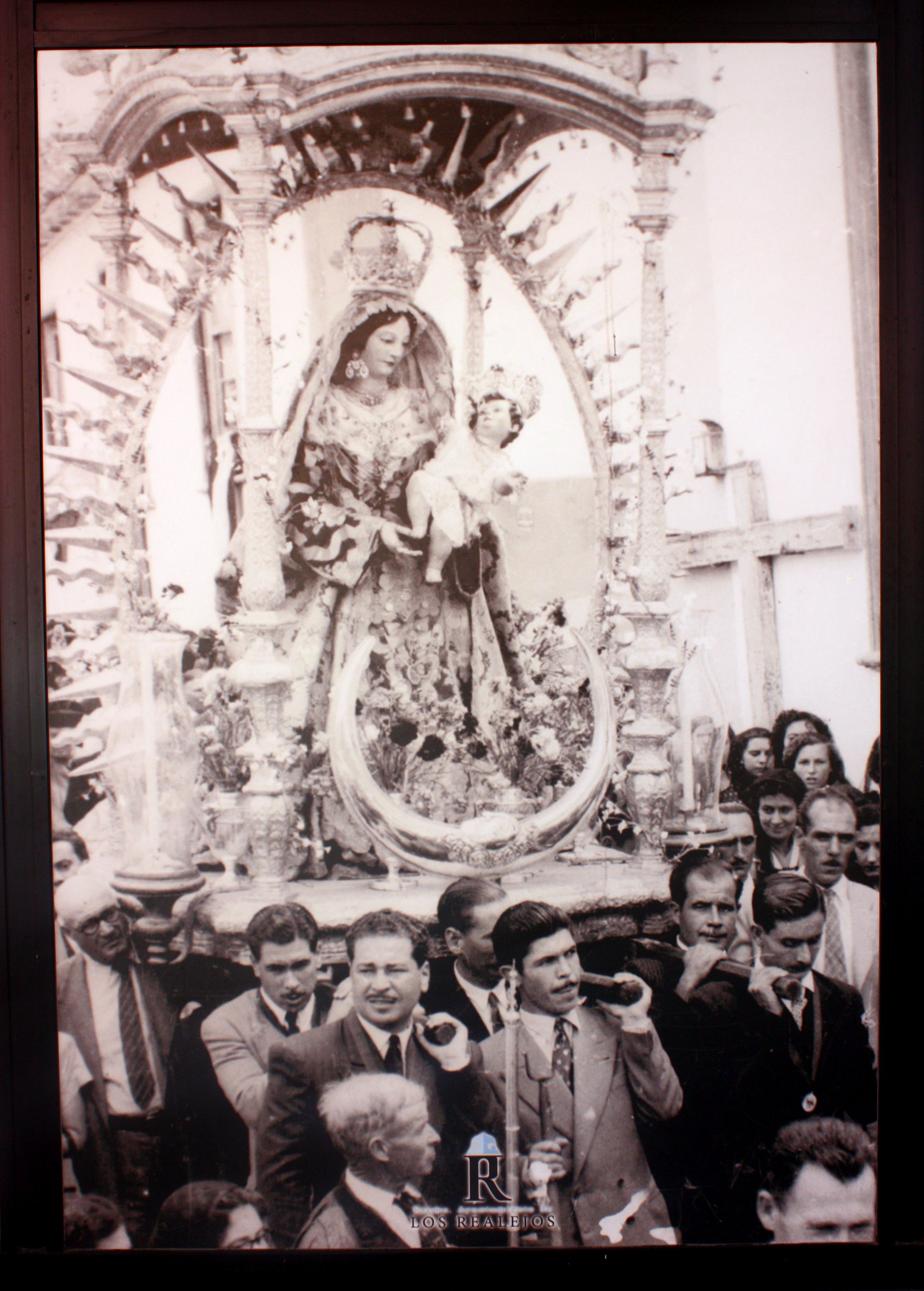 Church Iglesia del Carmen San Agustin of Realejos the number Two sancturary of Tenerife has been the destination of pilgrimage for devoted Catholics of Tenerife North since 1904.

Mind also a somewhat disputed Marian apparition early in XX to a South American woman near the Paraglider Pistes of Icod El Alto. 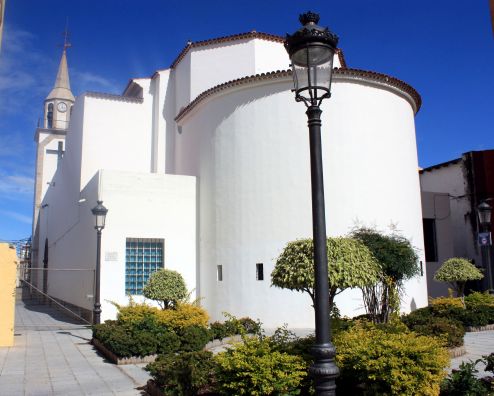 Iglesia Nuestra Senora del Carmen the Carmelitan shrine seen from its back at la Plazoleta de Marinos the barers of a noble alliance. 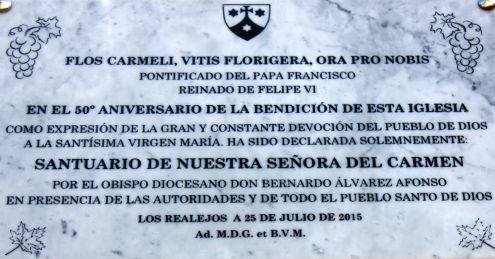 Our Lady of Mount Carmel Virgen del Carmen is ongoing Mayoress of Los Realejos and Patron of the Valley of la Orotava as well as of all Marinos.

The Catholic devotion of the Realejos town folks is extraordinary. There on Wednesdays at the Sanctuary, women bring their new born babies to be blessed by Our Lady of Mount Carmel.

However, the celebrations in her name also have a very mundane side. Needless to say, even worldly Fiesta queens are crowned for the occasion and fireworks are never amiss.

Adults are also blessed at the Realejo Sanctuary. Pets? I wouldn't know but they have their chance during a couple of San Abad festivals on the island, such as at La Matanza de Acentejo early in the year.

Get a better idea about the July celebrations of Los Realejos by some past activities, while Puerto de la Cruz is similar, except for its Heinecken Jazz festivals in July. Click

From Fiestas del Carmen back to Los Realejos