The puzzle of varied Tenerife crabs by the Puerto Cruz Muelle. 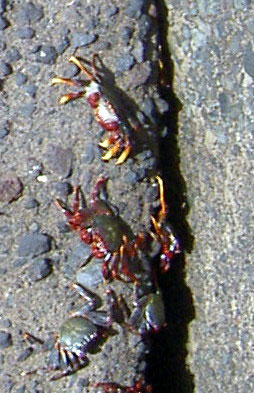 Crabs on Tenerife which are Cangrejos in Spanish and Brachyuras in scientific circles were not new to me. 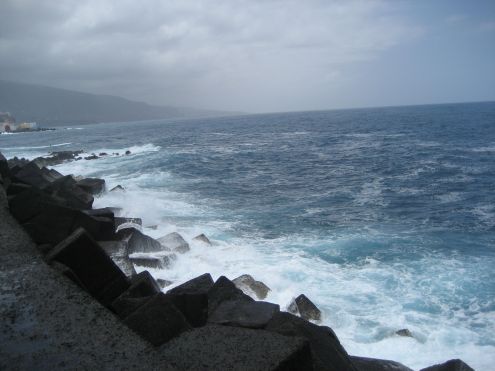 Habitat in this case is the so called Muelle the jetty by the old harbor of Puerto de la Cruz. 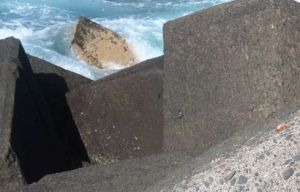 It's about 800m long and almost connects with Playa Jardin.  This Muelle is about 5 meters above the ocean.

There, the waves hit with mighty force.

It may be very dangerous to walk there. A very big junk of this breakwater has been reclaimed by the Atlantic, already.

Note the jumbled up jetty's concrete stones. They come in slightly different colors which is very important.

In fact, you are bound to observe a peculiar fact about the appearance of these crustaceans of 10 legs. These rock climbers seem to be generally adapted to that of the stones on which they move about. That's why the almost anthracite variety that crawls on the dark boulders is impossible to catch on camera. 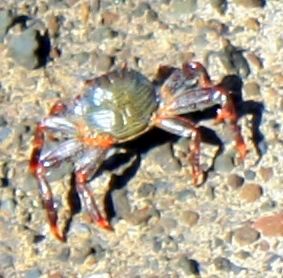 Make out the creature beside with olive green body and  its legs. Another two in its front which have claws are not in the photo.

It matches the stone it's on almost to the T.

Olive green, silver grey, yellow and orange hues are dots of this boulder. Exactly like the crab... 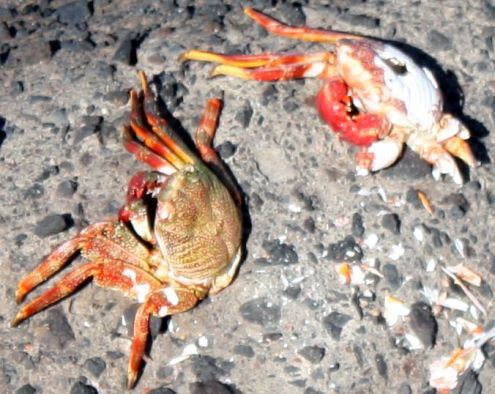 The ones above don't echo the coloring of the concrete stone. They have an almost white body. The rest is of a brightly colored yellow, orange and red.  Are they alive is what remains to be asked. Hard to say...

The bright one below was certainly not dead. It was moving very slowly, though. Notice its eight yellow-orange legs and its two front ones with red claws. 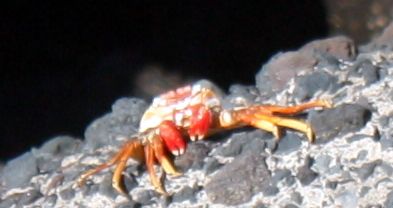 A color enigma leads to doubts.

However, I am having second thoughts again to name the creatures. I am still researching for this marine biological expert who proofs to me exactly why they merit a certain classification, hence their real name.

Watch the following short video where the same species are shown,  as in the photos of this page. There,  it's also assumed that you see Grapus Adscensionis, whose name I am inclined to adopt.

Indeed, the color controversy haunts me. However, would these utterly fast reef runners of the Tenerife Muelle in Puerto de la Cruz indeed change colors?

Possible reasons for change of appearance. 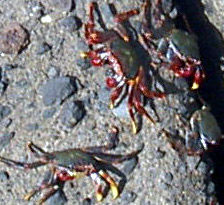 Loosing balance while taking pictures  from above of the multi legged Tenerife Cangrejo creatures is a scary idea.

You look down upon those creepy crawlies and you see crevices.

They seem to lead into bottomless pits between black boulders. 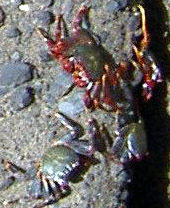 My German friend calls them Voland or, Woland Krabben.  I haven't found that name in the Internet as yet.

Many of them in different shades of green were in the majority. Some were almost black.

Then, I discovered some with yellow legs and, others with red legs.

All of those colorful reef dwellers were bigger than the others.

All look like more or less two inches long.
None, really, seemed to be hermits. The less spectacular ones were on big boulders in groups of their own. Others had joined the beautiful ones.

The yellow legged one was more rare than the red legged one.

A Tenerife red legged green contestant seemed to let off much foam or white bubbles among its fellow crustaceans. It was too far away to see what it was all about. Also, I couldn't say for sure if the creature was lying on its side.

In some nooks some sort of fighting seemed to go on.

Locals may hunt for Brachyuras as fish baits, such as the popular fish Vieja. It's done off the beaten track on Punta Brava which is easier to walk for humans.

They also do so on Isla Cangrejos by the Los Gigantes charcos pool.

By the way, Cangrejos are unlikely to be fit for human consumption. Colorful marine creatures are usually poison for people.

Where and when buy the edible Buey variety?

Important to know for seafood shopping.

The large, edible Brachyura is called a Buey de mar in Spanish and not Cangrejo, by the way. The Latin name of the one you can also eat is Cancer pagurus. It lives by the Northern seas as well as by the Mediterraneum.

How to clean and cook a Dungeness crab.

This crab very much resembles the one which is sold by Christmas in Tenerife. Click here, to see how to handle and prepare this seafood.

News for a change to the intertidal zone Muelle El Puerto.

In fact, the planned construction of the new yacht and cruise ship harbor by the habitat of the Brachyuras may remove another healthy ecosystem.

Find out more about the island of Mount Teide which has multi colored crustaceans.

From crabs back to wildlife of Tenerife with photos of reptiles, goats and birds...

If you found this information on Tenerife reef creatures interesting, ad it to Your Favorites by one of the icons below. Or click on your Browser's Favorites in the top tool bar...

Perhaps, you will find out more about Tenerife crab habitat or behavior. Then,  you can trace my page fast. Please, share more valuable creepy crawly crab insight or better photos via my contact form. Even school kids need that information. Thanks in advance for helping by the Tenerife holiday home insider.