Useful information for the Tenerife paragliding or parapenting sport.

flypa, club brand
Tenerife paragliding by Flypa would have taken Leonardo da Vinci's breath away, had he seen it in action. His sketches of wings that he designed for humans to take to the skies are famous. Why Flypa? Flypa is a club and more. It was prominently displayed on the winged canopy of the paraglider.

A rare incident of flying in the skies 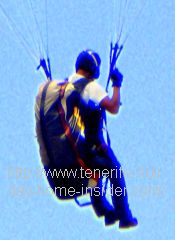 Paraglider pilot with seat, strings and backpack.
It was on Saturday, August,16, 2014, just after lunch. It was a memorable day, as it was the first time in 13 years that I saw a paraglider pilot approach beach Playa Martianez. Normally the fliers don't descend on the Martianez coast. They use a spot by the Muelle lighthouse of Puerto de la Cruz, El Socorro Beach or El Quinto of Los Realejos.

Make out the pilot's seat...He is holding several strings that control the wing which is not in the picture. He was wearing a very big backpack. Apparently, an additional parachute is kept inside it for double safety. 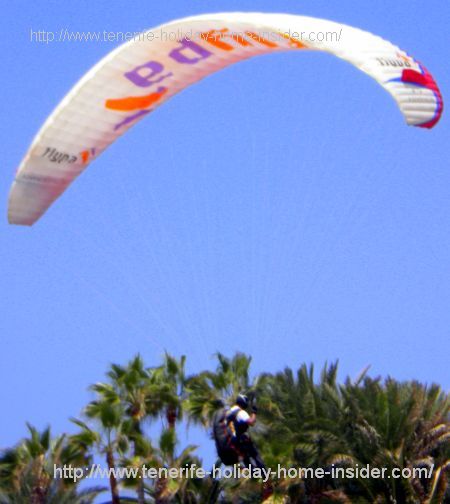 tenerife paragliding, pilot, wing
The courageous pilot virtually brushed past a coconut tree of a palm grove. It's between the seashore and the spectacular Lago Lido Martianez, more about which learn here. Next, he was gliding towards the front of the bar towards the edge of the Playa Martianez beach promenade.

A dangerous but, safe paraglider landing on the beach 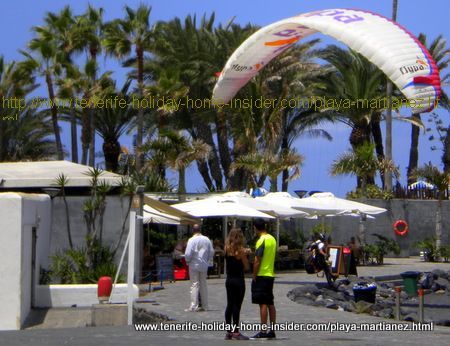 Paraglider landing on the beach
This skilled parapenting pilot whose winged parachute advertised the oldest Tenerife club seemed to be very confident and experienced. He managed to hit a sandy spot right next to dangerous pebbles. Nobody got hurt.

In 1990, Ibrahim Gonzalez founded the first club for paragliding in Tenerife in Los Realejos. Much later, a second one in Los Silos followed. Ibrahim is by far the best pilot in the Canary Islands. He's proud to have been a paragliding guide to the world champion Mario Heinzler and many other top personalities of the sport. Ibrahim tells us that Tenerife is a very useful and sometimes novelty challenge for world class pilots. .Needless, to say is that not only beginner but also advanced tuition is offered.

Watch the following awesome video with Ibrahim's younger brother, who is also an instructor. See him perform some extreme paragliding over the bay of beach Playa El Socorro.

His parachute which displays Mirador El Lance may be an indication that he used this lookout to jump from. This is the historical spot where the last Guanche king Bentor threw himself into the abyss of Tigaiga to kill himself. 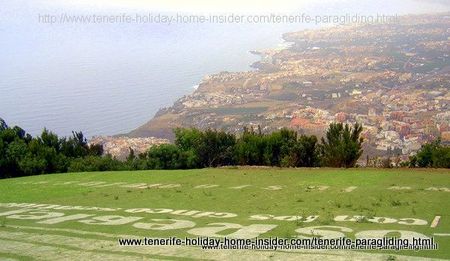 Paraglider launch, la Corona, Tenerife
A green paragliding launch strip which is also used by Flypa is at La Corona which is about 750 meters above the sea. This area is very safe with ideal back-winds that are usually gentle. Only when the top of the ocean is choppy, nobody is allowed to take off.

Para trekking has been introduced by Flypa as an additional fitness training. It also helps to get to the jumping strips without the help of family or public transport. Of course, there are buses that go to Icod el Alto. But the steep ascent from about 450 meters a.s. from there isn't a Sunday stroll. A backpack that must store an additional parachute and hiking equipment must be carried 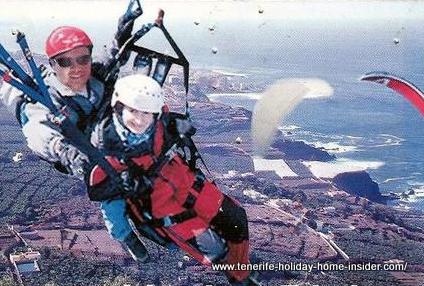 Tandem paragliding, los Silos
This is paragliding thrill where a guest is sitting in front of the pilot who does all the work. Usually, one flight trip costs about €90 to €120 depending on duration and other factors.

Indeed, Flypa is also the name of the international paraglider festival of Los Realejos. It had been a popular event since 2005 for several years with participants from all over the world.

Unfortunately the last festivals had to be canceled because of the Recession in Spain. The last entry in the very interesting Flypa Facebook was about a planned 2013 paragliding festival in Los Realejos which never happened.

Beach Martianez of Puerto de la Cruz where a skillful paragliding pilot landed without getting hurt.

From Tenerife paragliding back to Tenerife sports.