The airport hotel Tenerife Monica Sur was recommended by myself to a friend of mine. Shortly after he arrived there he called me by "Whats app". That was in December 2015.

He was shocked. He encountered graffiti in the hotel elevator, dirty towels in the room and no hot water for the bath after running it for 15 minutes.

I called reception and asked to please do something, as the elderly man was tired and feeling ill. Reception told me that he had to talk to them himself.  By the way, there was no telephone in the room.

The only positive thing he noticed was a good TV reception with many channels.

By the way a few hours later,  hot water for the bath was available. 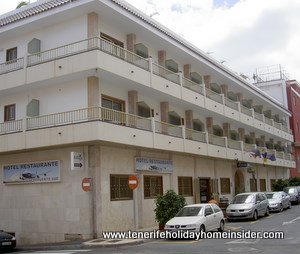 Also, he had booked online but, they couldn't find it. He had to pay cash again. The hotel receptionist only issued a receipt when asked for it.

I asked the gentleman to take photos when he is feeling a little better.

Poor public relations and rudeness are two things. The receptionist hung up on me when I called again.

What made this hotel ideal for air travel?

This medium sized 3 star Tenerife hotel is just far enough off the main road of San Isidro to ward off traffic noise.

It gives you more than just relaxing accommodation.

So what was this Airport hotel Aeropuerto Sur like? 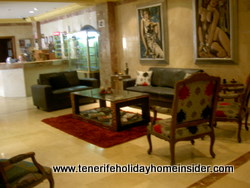 The lobby of Hotel Monika Sur 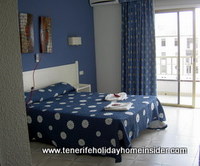 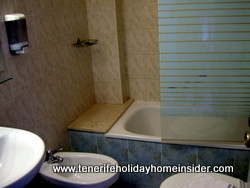 The airport hotel bathroom is not very big, had no frills but, was very clean and everything including showers worked well in the past.

Play billiard or other social games at the south airport hotel games room.

A bar room for special functions

One of the quarters behind the lobby is for taking refreshments, for snacks or for meals.

It's of generous size and may even accommodate a medium sized conference.

This dining hall with its airport hotel Tenerife bar was cozy despite its size. There, an open door to the street allowed for extra ventilation and fresh air, while there was air conditioning in the bedrooms, by the way.

Lighting any type of tobacco was prohibited by Spain's anti smoking law.

You could even glimpse the cook in the adjacent modern and previously clean kitchen from this South airport hotel dining room. 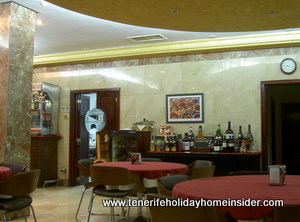 The airport hotel Tenerife also had rather innovative features, here and there.
There was a modern furniture sideboard by the entrance which was rather nice.

A healthy lunch at the airport hotel Tenerife Monica Sur

Depicted below are photos of the hotel lunch that I had there on August 19, 2011. 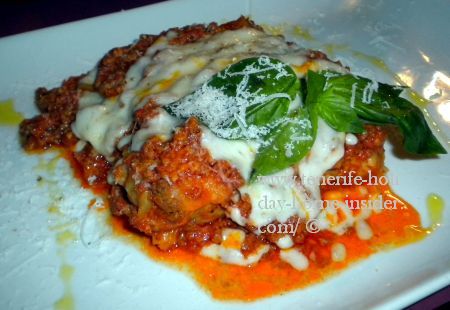 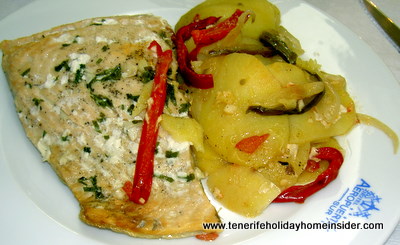 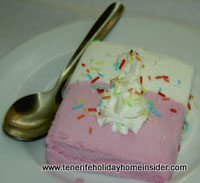 Ice cream dessert simple but good
The price for the 3 course meal was € 8 at the time which may be more now. It was an absolute bargain, as bread and a local house wine were included in the price. The fish with its nutty bite in the delicate herbal sauce was simply delicious and so was the Lasagna.

Unfortunately, we never know if this hotel doesn't have a new cook or introduced food that isn't as good as before. Why? Much can change in gastronomy within a few years. 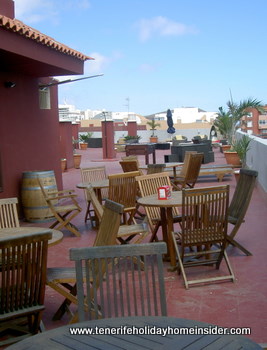 A hotel sauna on the roof

A woman with a baby in a pram asked how to get to the airport hotel pool veranda, while I was by the hotel reception. Find it on the rooftop azotea, where you also encounter a fitness center and sauna.

A pool to be enjoyed under stars

However, I only visited the sparkling pool and hotel azotea. The swimming basin has been sunk into an elevated podium by the big bar. Rustic, wooden pool loungers with umbrellas and round tables with individual seating were grouped all around the swimming platform. Everything hugged the bar.
A big pot plant looked a bit starved of water, unfortunately. 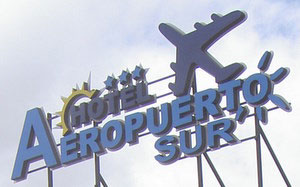 Otherwise, the airport hotel Tenerife has its brand name Hotel Aeropuerto Sur displayed above its pool within the open air 'azotea'. This roof veranda must have been very attractive when it was alive with waiters serving a party crowd between 50 and 90 people or with small open air seminars or meetings.

Learn how well this airport hotel connected you to get around Tenerife as far as to the capital Santa Cruz in less than an hour.

Easter or July and August are the peak Medano surf holiday seasons for Tinerfeños. Many come down to the south of the biggest of all Canary Islands where they often have their holiday home in Tenerife. The Canarios wouldn't go to mainland Spain in summer, as they prefer a more moderate Tenerife climate, more about which learn here.

Why I selected this hotel?

Please look at some Trip Advisor reviews before booking at closest hotel of Tenerife South airport or just call by phone.

I feel like I must apologize to have recommended the airport hotel Tenerife South Monica Sur which was in top condition in 2011. This was a mere five years ago compared to now in almost 2016.

From airport hotel Tenerife back to Hotels Tenerife.