A top environmental policy was implemented by a strict anti smoking law Spain on January first, 2011. 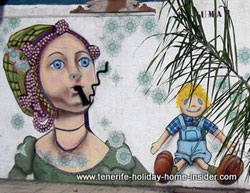 Who would have expected an such a law when looking at a poster which attacked tobacco smoking? This occurred in a town with much care for the environment. Needless to say, all of Spain and Tenerife was shocked soon after. That happened when a stringent anti cigarette policy was enforced.

Anti smoking ideas, as depicted in the Puerto de la Cruz graffiti beside meant well.. They were supposed to be a blessing. Children need protecting most. No doubt about it.

Well, Singapore has done very well with its environmental policy with anti smoking over decades by now.

No need to tell anybody who has been in Spain, even only once. The Balearic Islands, mainland Spain, Ceuta as well as the Canary Islands with Tenerife as leader have one fact in common.

They are all Latin locations where pubs, restaurants and resorts have been popular with locals as well as tourists, as the establishments were liberal to a reasonable extent. This dates back to the end of Franco's days by 1970. Franco took it even so far as to introduce a policy with no carnival allowed. Well, the so called Tenerife Carnival or  Tenerife mad season before Lent went on in some ways, anyhow. 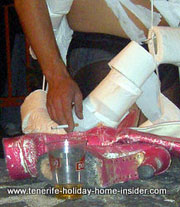 Cigarette break during the gay parade

On your right, wonder about a cigarette break... It was taken by a marathon runner during the Carnival Puerto de la Cruz gay parade Mascarida Ponte Tacón. The incident only portrays part of the masqueraded body. The hand of the man who stopped running is holding a cigarette.

This is rather ironic but then, this is only a funny sports event.

Nevertheless, this carnival detail puts off smoking. Doesn't it?

Most smokers in Spain and other places wouldn't argue that much speaks
for anti smoking Spanish environmental awareness.

Yet, it is not always possible to enforce environmental strategies. And here, we may wonder what carnival with its past history had to do with the environment?


The masquerading festivals had been part of Spanish culture for a very long time. Customs always take over everywhere and become an environmental issue which demand acceptance. Some of it negative too, of course...

Environmental threat comes into play when alcohol consumption, littering, loitering as well as noise pollution take over. This can happen during carnival.  A legislation was introduced because of street music which became too loud.

So why are some heads red hot agitated by the anti smoking in Spain?

Spain's prime environmental policy anti smoking dictatorship was introduced at a time which was too sensitive politically as well as socioeconomically.

Otherwise, it may have been halfway welcome. Anti smoking measures need careful introductions.

They work sometimes, but not always.

What environmental solutions are people taking to save their restaurants, pubs and bars from bankruptcy? Mind that many feel that their Spain business is at stake...

Smoking in the rain

There is this pony tailed Londoner sitting by the outside bar table in Toscal Longuera smoking with raindrops on his face. This street pub scene looks silly enough on the narrow pedestrian path by the road.

When I pass this British man, while I smile, he tells me that a proper Englishman loves all kinds of weather, above all rain... This is a funny thing to say for a UK expat who smokes in the rain in Tenerife Spain.

Buy inside, smoke outside

By the way,I must be one of few people who don't like Cannabis in Tenerife. Generally, the stuff is illegal, though. Therefore, this smokers shop in Puerto is rather peculiar.

Want to know more about Cannabis

Cannabis is a plant or drug that is legal to grow on Netherlands' balconies for a person's own consumption. It's allowed to smoke, eat or drink it. Sure, a Dutchman may cook with it. Hence no environmental policy in Holland which protects you from the smell, which I find strangely sweet and revolting.

Tenerife cigars , and any other smokers' stuff are not only cheap but also make unusual gifts or souvenirs, sometimes.

By the way, nobody really seems to mind the street bar smokers. Virtually all food and drink establishments have chairs and tables outside now, such as part of new business ideas like by Bar/shop La Vendita in Puerto de la Cruz.

However, the most interesting, I heard is that big Spanish cities like Madrid have already copied a German anti smoking loop hole. They turn their restaurants, pubs and bars into clubs.

No anti smoking environmental policy applies to the ever so special nor not so exquisite clubs. Ha!

Profiteers are born or reborn - Injustice may reign

Injustice is unavoidable, when war or any other harsh measures are enforced.

Industries rise from underground which may not be the most legitimate.

Do you remember bad loop holes during the American prohibition? Was alcohol in those days really a no brainer? Was there an environmental policy for all? Some famous and prominent people got really rich with it, you know... Well, it would be interesting to research the topic further.

The most rigid environmental policy by Spain which is anti smoking for certain places carries a penalty of €600000. No kidding...

Of course, you can always buy and smoke electronic cigarettes. They contain a tiny amount of nicotine but, nothing of the other rubbish which gets you hooked and which may ruin your organs, teeth, brain and more. You can even smoke them in the aircraft cabin.